Oration on the centenary of Liam Mellows 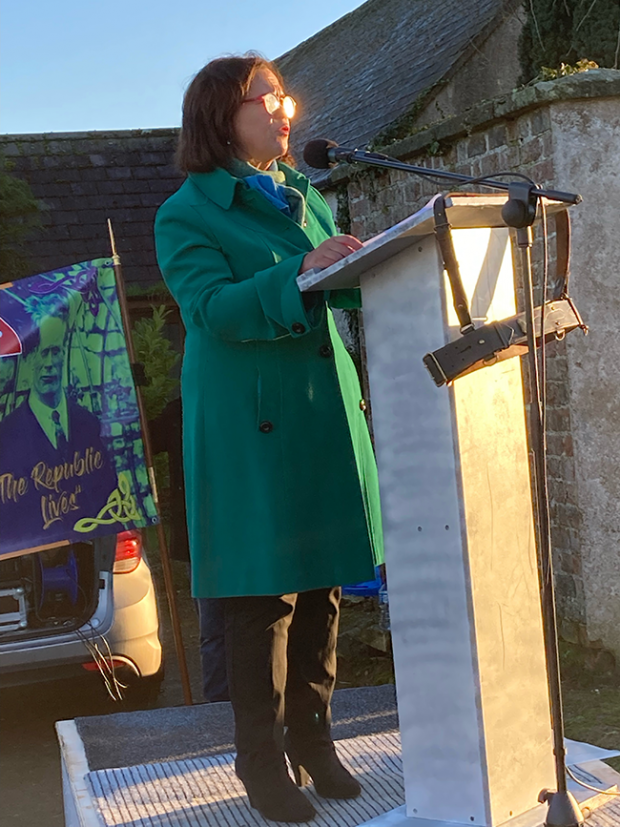 • Mary Lou McDonald delivers the oration. In front of the speaker is the Sam Browne belt worn by Liam Mellows

Friends, the yard in Mountjoy Gaol is sacred ground.

A century on, its walls reverberate still with the echo of the shots fired by the Free State soldiers that ended the lives of four Irish patriots; four volunteers who bravely stood by the republic.

In the early hours of December 8th, 1922 - Joe McKelvey, Rory O’Connor, Dick Barrett and Liam Mellows were woken from their cells and told that were to be executed.

There would be no trial, no pleas, no pretence of legality.

The Free State Government openly described its execution order as one of reprisal for the killing of Seán Hales TD the day before.

They were not the first republicans to be executed by the Free State, nor would they be the last.

Erskine Childers, an icon of the independence struggle, was executed later that month for possession of a revolver that had been gifted to him by Michael Collins. 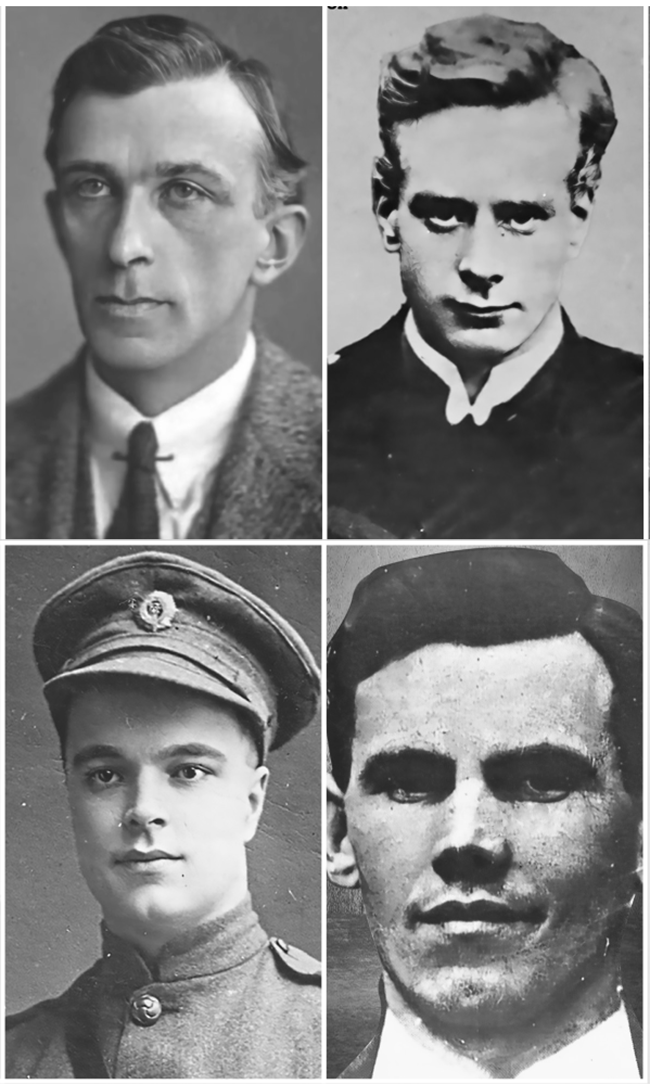 His execution marked the culmination of the demonisation of this principled, committed, and talented Republican activist by both the British and Free State governments.

A week before Mellows and his comrades faced the firing squad - Joseph Spooner, Patrick Farrelly and John Murphy were executed in Beggars Bush Barracks.

Over a period of six months, the Free State executed eighty-one republicans. Thousands were imprisoned.

The ferocity of the executions intensified the bitterness of the Civil War.

The dream of the republic was sacrificed for a partitioned, reactionary Ireland in which power has rarely been wielded in the interests of ordinary people.

Working people were kept down and often impoverished.

Women were denied their place as equal citizens under the shadow of Magdalene Laundries and Mother and Baby Homes.

The egalitarian spirit espoused by the women of Cumann na mBan – women who sustained the revolution through its darkest days – was denied.

Forced emigration would become a sorrowful rite of passage for generations of young people.

Connolly’s vision of the Irish republic as bastion of human dignity and economic justice was cast aside.

Liam Mellows saw the Treaty and the establishment of the Free State as a concession to British Imperialism, as a subversion of the Republic declared in 1916. 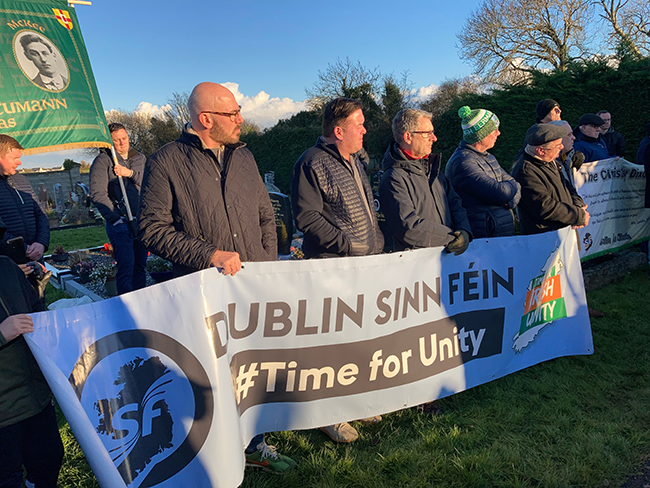 A republic ratified by the people at the 1918 General election which saw Sinn Féin sweep to victory and Mellows elected as a TD for East Galway.

Mellows’ thinking had been deeply influenced by James Connolly whom he had met on several occasions at the Dublin home of Constance Markievicz in the years prior to the Easter Rising.

It was Connolly’s socialist vision that Liam Mellows held so tightly, up until his dying moments in Mountjoy.

In his prison Diary, Mellows lamented the capitalistic course taken by the Free State and wrote; ‘So called money and the Gombeen men are on the side of the Treaty, because the Treaty means imperialism and England. We are back to Tone - and it is just as well - relying on that great body, ‘the men of no property’.’

He longed not only for the national independence of Ireland but also for the economic liberation of his people. 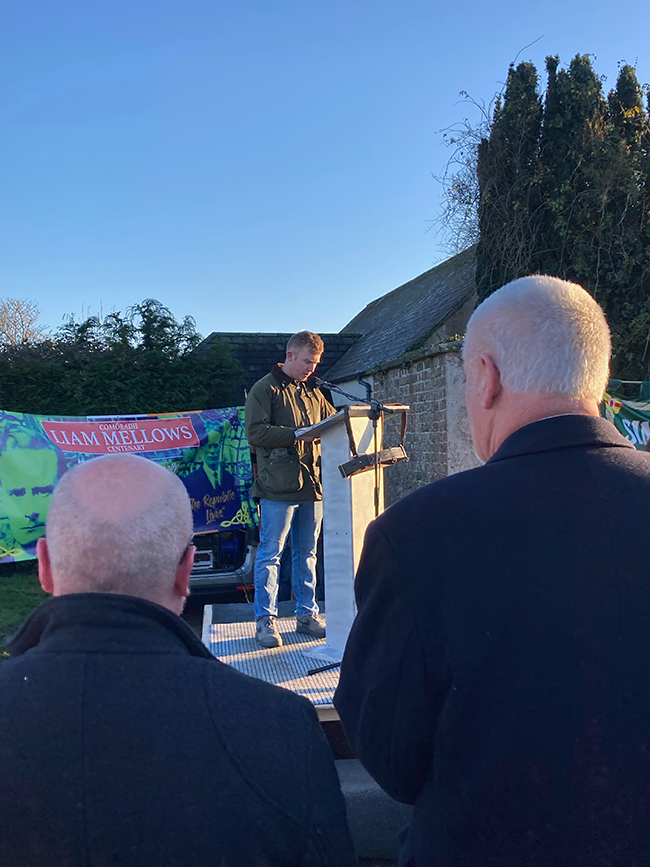 • The last letters of Mellows and his three comrades were read

It has long been said that O’Connor, McKelvey, Barrett, and Mellows were chosen for execution to assert the Free State’s authority across all four provinces.

However, there is no doubt that the bullet fired at the chest of Liam Mellows was fired at the heart of the socialist republic.

Such was his influence.

The boy born in a British Military Barracks had become a man who helped to rock the very foundations of British Rule in Ireland.

Though his family had hoped that he would transcend the class barrier that had prevented his grandfather and father from becoming officers in the British military, Mellows chose a different path.

The seeds of his republicanism were planted when, as a child, he went to live with his Mother’s family in Wexford.

This was the time of the centenary of the 1798 rebellion, and Liam absorbed the stories of the Croppies, Father Murphy, and the heroic stand at Boolavogue. 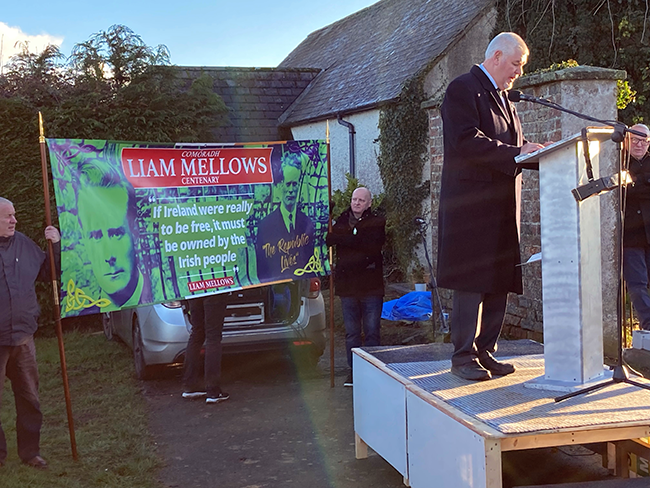 Later, as a young man working as Clerk in Dublin, he acquired the passion for revolution.

As an avid reader of the IRB newspaper, ‘Irish Freedom’, in 1911 Mellows came under the influence of the great Tom Clarke.

It was Clarke who first recognised Liam’s ‘leadership qualities.

Over the course of a decade, his contribution would be central not only to the fate of the republican movement, but to the course of Irish history itself.

Travelling by bicycle to avoid detection, he sometimes covered up to sixty miles a day.

As a republican organiser his work rate was phenomenal, and he kept going in the face of arrest, imprisonment, and deportation.

Given his inspirational dedication, it’s not surprising that Liam Mellows appears at nearly every major juncture of the revolutionary period.

From Howth in 1914 where he helped collect the rifles off the Asgard, to East Galway where he led the most significant mobilisation of Volunteers outside of Dublin during the Easter Rising,  and onto the US where, he used his talent as brilliant yet reluctant orator, to pave the way for De Valera’s hugely successful tour to raise political and financial support for the cause. 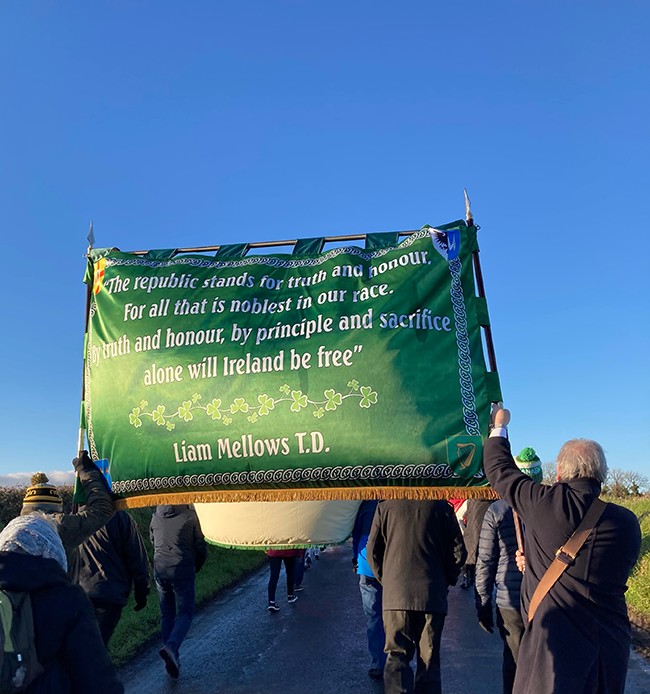 • The words of Mellows carried proudly

Returning to an Ireland in the throes of revolution in 1920, Mellows worked under the cloak of secrecy as the IRA’s Director of Supplies.

The world had just witnessed the collapse of three empires.

Mellows saw an unprecedented opportunity for Ireland to rid itself of centuries of British imperialist oppression.

It was an opportunity he later considered betrayed by the signing of the Treaty and acceptance of dominion status and of the Crown.

Speaking during the Treaty debates, Mellows said, “The British Empire is the thing that has crushed this country; yet we are told that we are going into it now with our heads up. The British Empire represents to me nothing but the concentrated tyranny of the ages.”

When republicans occupied the Four Courts in April of 1922, they were re-asserting the right of the Republic to exist.

When their former comrades turned the guns of the enemy on them, a Civil War was sparked engineered by the British to maintain its empire in Ireland.

As the Free State rained British artillery down on the Four Courts, the republican garrison faced the dying of the light. 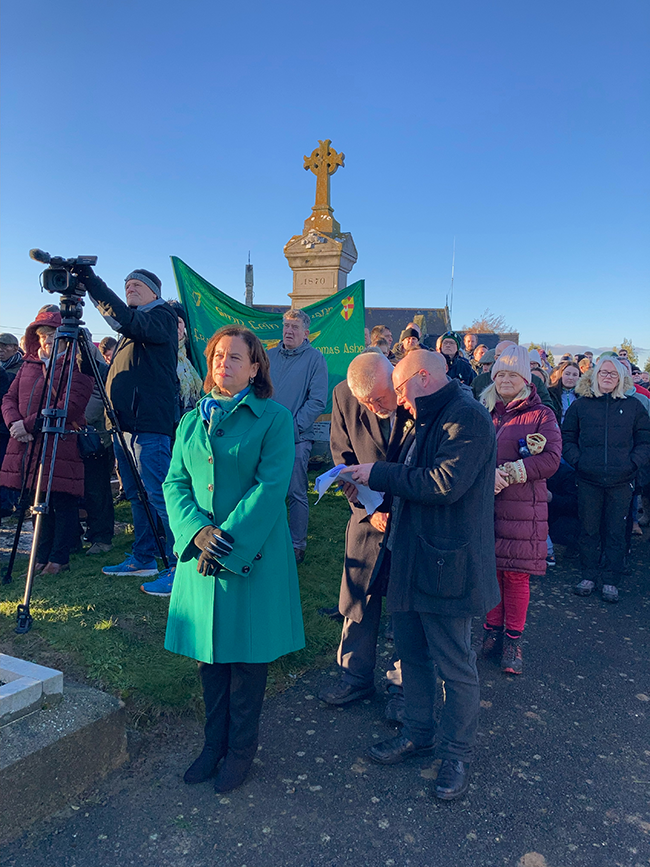 They faced the heart-breaking loss of the unity that had driven the cause of the independence struggle.

They faced the betrayal of that republic for which so many of their friends had given their lives, endured jail, and for which the people had greatly suffered.

There, Mellows was asked by a member of Cumann na mBan when the spirit of the republic would rise again.

In sorrow he conceded, that it would take some time, but in hope, he said that one day a new generation would step forward to reclaim the great ideal.

Following the Civil war, Ireland became a conservative, reactionary place. Some who stuck to the Republic regrouped. Many were marginalised, criminalised, and forced into exile abroad.

In Mountjoy Gael, as the firing squad readied the rifles, in his final hours, Mellows wrote a last letter to his beloved mother.

He asked that he be laid to rest ‘in some quiet place’ here in Castletown.

And so here we are.

And so here we stand.

We, the generation that Mellows foretold, stand at his quiet place.

Here we stand for Irish Freedom,

Here we stand to write the next chapter in our long struggle for full nationhood.

Here we stand the change-makers, the nation builders determined to realise the dream of Liam Mellows.

We are living in the end days of partition, on the pathway to reunification in our time and the achievement of thirty-two county Irish Republic.

As the conversation on Irish Unity gathers pace, the cynics say it’s impossible.

They told us that a Republican first Minister was impossible.

Well, today, Michelle O’Neill stands elected to that office in a state that was designed to ensure that it could never, ever happen.

It’s the people, not those in high places, who are renewing the promise of the Irish nation.

It’s on the hopes, optimism, and energy of those who seek real change that nations of equality and unity are built.

Such an historic opportunity exists today.

The next step must be for the Irish government to establish a Citizens Assembly on Irish Unity.

The vision of Liam Mellows has come full circle. 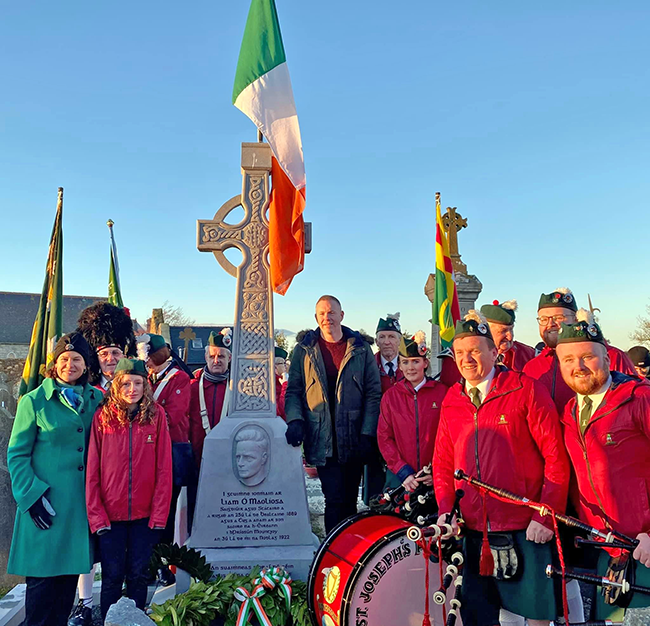 • The St Joseph’s Pipe Band, Longstone, Co. Down which led the parade, at Mellows’s grave with Sinn Féin South Down MP Chris Hazzard

Make no mistake, we are out to build a new Ireland for everyone, A nation home free of sectarianism and division, an Ireland of prosperity where nobody is left out or left behind, an Ireland where workers and families have the right to a roof over their heads, the right to healthcare and real opportunity with good jobs and decent wages, An Ireland where our young people can build a future at home.

There are those who stand against the tide of change.

One hundred years ago, Mellows saw it all.

He said, “Men who get into positions and hold power will desire to remain undisturbed and will not want to be removed or will not take a step that will mean removal in case of failure.”

Next Saturday, though they have failed our people, Micheál Martin will hand the keys of the Taoiseach’s office back to Leo Varadkar and carry on as normal.

They cling to power and position.

But they have not contended with the ambitions, hopes and desires of our people for change.

Just as Mellows and his comrades reached for freedom in 1922, this generation of reaches confidently for tomorrow and for the republic.

In so many ways, the things for which the people of Ireland were fighting a century ago are the same things we work for today.

A coming together of all our people.

A republic of equality, fairness, and justice.

A nation of our own that would make the heart of Liam Mellows sing.

I believe it’s within our grasp, and with one final push, my friends, we will see the dawning of that day.