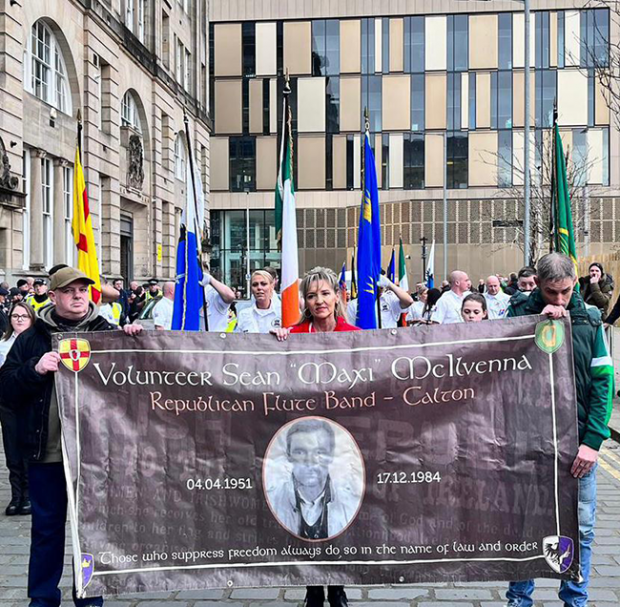 Martina Anderson was the speaker at the 38th anniversary commemoration of the death of IRA Volunteer Seán McIlvenna. Anderson said:

“Whilst I am honoured to address you here today in Glasgow in the company of the Vol Seán McIlvenna Flute band, I am also heartbroken as we commemorate the 38th anniversary of my dear comrade and friend Seán McIlvenna.

I thank you all for being here and for keeping Seán’s memory alive and honouring him in this way.

From us all, we send commemorative acknowledgment to Seán’s wife Pat and their children Cathy, Sinead, Ciara, Sarah, Patricia, Fiona, and Seán junior.

A long time ago, much longer than I care to remember, on a night not so special or out of the ordinary, the door of my flat opened in Buncrana Donegal and in arrived two people.

One I knew well, whilst the other I had never seen before - that was the first time I met Seán McIlvenna.

They say first impressions are lasting, but in the case of Seán McIlvenna nothing could be further from the truth. 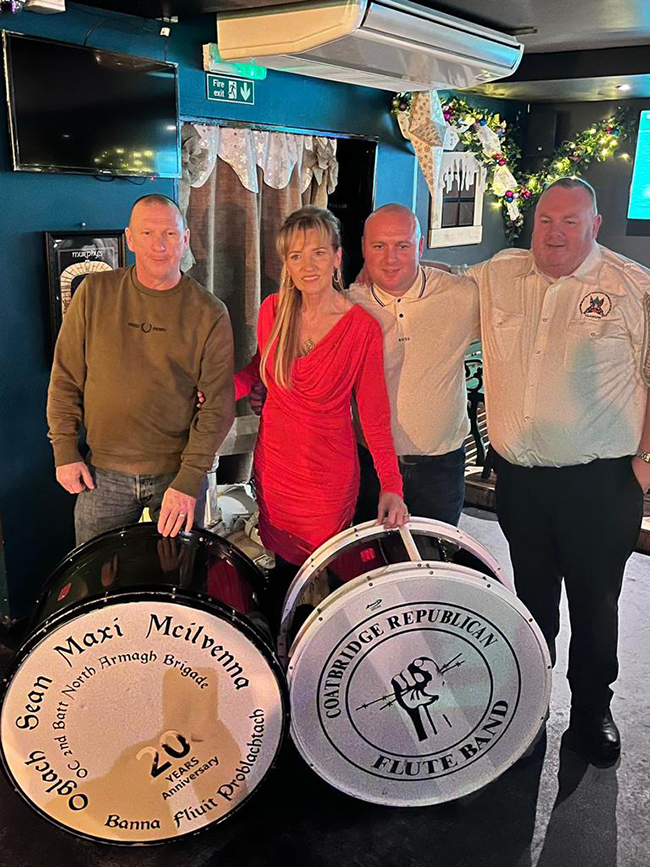 Seán spent the night talking, or more accurately lecturing my flatmate and I. My first impression was that Sean was an arrogant know-it-all male, mansplaining to two young dedicated Irish republican women.

Seán had an opinion on every issue imaginable and held very strong views about how Republicans needed to conduct ourselves impeccably, especially those of us who were on the run - we had to epitomise the highest standard of respectable behaviour - and us two Republican women needed to ensure that we did not drink too much, stay out too late nor “misbehave”.

This guy was wagging his finger as he told us “Remember who you are and what you represent” and it was hard to get a word in –and to be perfectly honest after that encounter - I could not see him far enough away.

But our first impressions were so wrong. Throughout the months and years that followed, I like many others who grew to know Seán, developed a mountain of respect for him. Seán was an inspiring leader, an impassioned man - with a deeply held view of how to advance our struggle – Seán, had a strategic political mind-set far in advance of any of us at that time.

Once we broke through the rough, tough, steel exterior of this remarkable man, he openly talked about his love for his wife Pat and their beautiful daughters - and he wanted nothing but the best for all of them.

He did not want his children nor any of the children being born into a partitioned Ireland to have to experience discrimination, inequality, oppression or a life of constant harassment and maltreatment by a foreign government. He fought and died for a new society, a new Ireland - a United Ireland.

When the twins were born two weeks before he was killed, he was ecstatic – one was a boy Sean Junior and of course baby Fiona made the perfect additions to their family.

Whilst Sean junior was released from hospital, Fiona was kept in a few more days. The proud Daddy insisted on having a photograph taken with baby Seán before “going on a message” on 17th Dec,1984.

That message took Seán, as commander of the North Armagh brigade of the IRA, to lead other comrades on a military operation which ended with the RUC firing a sub-machine gun hitting Sean in the back.

We had to right the wrongs experienced by many in our society and Seán McIlvenna was not going to leave it to his children to fight for the freedom that he so desperately wanted them to enjoy.

The political landscape in the north of Ireland has now changed, changed utterly - and that change would not have been possible had Volunteers like Seán McIlvenna not been prepared to give their all.

The generation that ended discrimination, ended deep structural nationalist inequality, and won our right to self-determination can be proud of all that has gone before, all that was given before, which was everything - and more.

Those of us who survived are very proud unrepentant Irish Republicans, advancing the struggle in places where we were once not present, not wanted and welcomed.  Republicans are working to make the Ireland we leave better than the one we were born into. 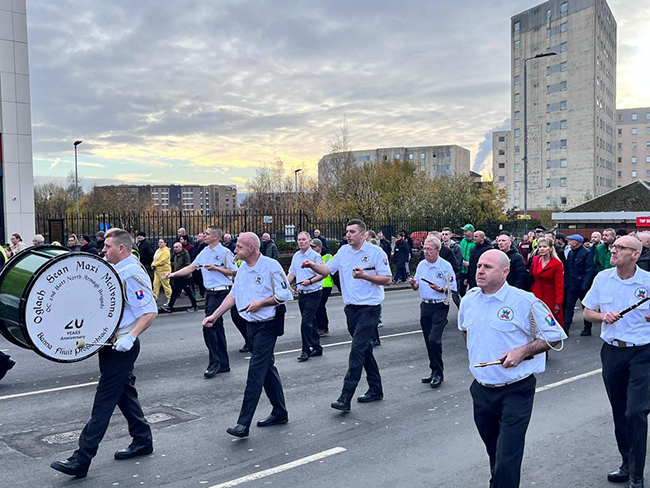 Former Republican prisoners, former hunger strikers, and former Volunteers – carry the memory of volunteers like Seán McIlvenna with us every day.

Whilst there are still much to do, there is no doubt that we have progressed the struggle for an united Ireland forward and I believe that Seán McIlvenna, the thinker, the leader, the strategist, the husband, the father, the man would be proud of what has been accomplished to date and I believe if he were here he would be applying himself with the same dedication to advance Irish Reunification.

I hope his wife Pat and his children realise the high esteem in which he is held, not only in Ireland but here in Glasgow.

Your attendance throughout today and my being here at this commemorative event, is an indication of how much Seán still means to us all - he will always be remembered with pride.

It’s heart wrenching for those of us who survived, knowing what Pat and the 7 children all missed out on: Pat McIlvenna lost the love of her life and her soul mate.

I loved Seán McIlvenna deeply as a comrade and friend and he is missed so much by so many.  For as long as I can play my part - I will continue applying myself to create the united Ireland that Seán fought and died for.

I ask you all to speak Volunter Seán McIlvenna’s name with pride and to never forget who he was and what he represented.”