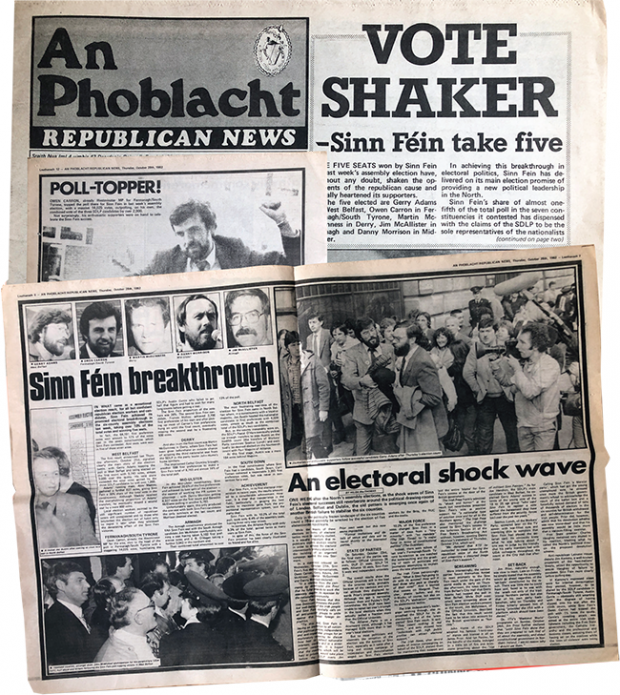 THE YEAR 1982 saw British Government strategy in Ireland in disarray. The Hunger Strike of the previous year, in which ten republican prisoners died in the H-Blocks of Long Kesh, had broken the British policy of criminalising the prisoners and, by extension, the struggle for Irish freedom. The world saw that Irish republicans had widespread community support among the nationalist population in the Six Counties.

But Margaret Thatcher was British Prime Minister and there was going to be no change in policy. Jim Prior was appointed Secretary of State for the North of Ireland - or ‘Direct Ruler’ as republicans called that autocratic office. It was necessary to be seen to be doing something and so, in April 1982, Prior announced a plan for ‘rolling devolution’. There was to be an elected Assembly at Stormont and it would be up to the parties in that body to work out how limited functions would be devolved from London.

There was no peace process, no inclusive all-party negotiations and no direct involvement by the Government in Dublin. The conflict continued with many IRA attacks on British forces, as well as sectarian murders by loyalists. Repression on the streets remained intense; in the same month that Prior unveiled his plan, the British Army in Derry shot dead 11-year old Stephen McConomy with a plastic bullet. 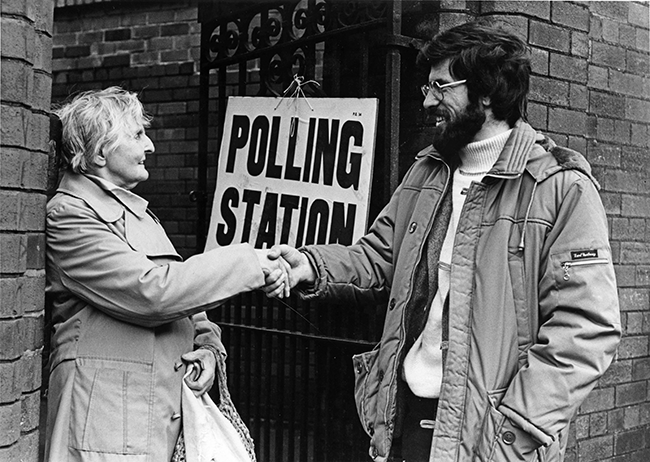 At its 1981 Ard Fheis, Sinn Féin had decided to contest Westminster, Leinster House and Stormont elections on an abstentionist basis. When the Assembly plan was announced, Sinn Féin called on the SDLP to join a nationalist boycott of the election itself. Writing in An Phoblacht in July, the paper’s editor and Sinn Féin Director of Publicity, Danny Morrison, said all were agreed on “the bankruptcy of the proposed make-up of the Assembly”. SDLP leader John Hume pointed to the unionist refusal to countenance power-sharing and said the Assembly would be “a dangerous talking shop” but he refused to commit to a boycott of the elections.

Despite some support in the SDLP for a boycott, that party decided to contest the election but not to sit in the Assembly. Sinn Féin stated that it would now fight the election as it could not allow the SDLP to “monopolise the leadership of the nationalist people”.

The Assembly was elected by proportional representation and Sinn Féin stood 12 candidates — two each in Armagh, West Belfast, Derry, Fermanagh/South Tyrone and Mid-Ulster, and one each in North Belfast and South Down.

The election allowed voters in the Six Counties — and those in the 26 Counties who could receive BBC and UTV — an unprecedented opportunity to hear Sinn Féin’s politics. The refusal of the unionist parties to share studios with Sinn Féin ensured that the party’s participation became the central issue of the election. The Fianna Fáil Government of Charles Haughey refused to lift the Section 31 broadcasting ban on Sinn Féin.

The British Army and RUC targeted republican election workers for harassment and 51 of them were arrested during the campaign. One such Sinn Féin election worker was ex-internee Peter Corrigan of Armagh City. Constantly shadowed and harassed, he was shot dead five days after the election by a loyalist gang which included members of the British Army’s Ulster Defence Regiment (UDR).

Polling day was 20 October. When the votes were counted, Sinn Féin had made a major breakthrough. After 12 years of dominance of nationalist electoral politics by the SDLP and only rare interventions in elections by republicans in the Six Counties since partition, Sinn Féin won 35% of the nationalist first-preference votes. 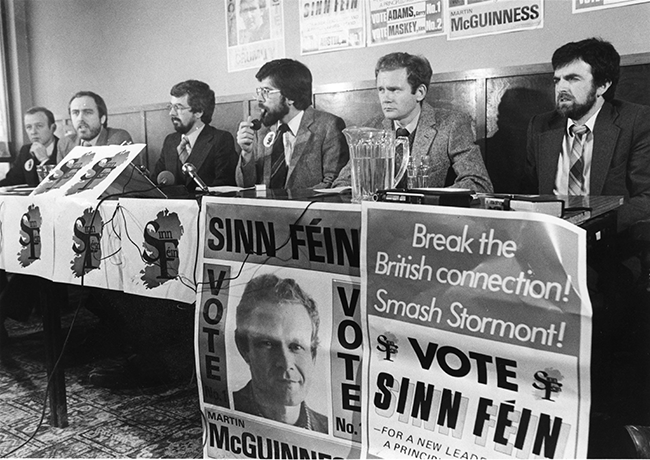 Five Sinn Féin candidates were elected — Gerry Adams in West Belfast, Martin McGuinness in Derry, Danny Morrison in Mid-Ulster, Owen Carron in Fermanagh-South Tyrone and Jim McAllister in Armagh. Adams and Carron topped the poll in their constituencies and the party came close to winning a seat in North Belfast and second seats in Fermanagh/South Tyrone and Mid-Ulster.

Government reaction in London and Dublin to the Sinn Féin vote was a negation of democracy: Prior refused to recognise Sinn Féin’s mandate; Haughey refused to lift Section 31.

The Irish Independent castigated the SDLP for boycotting the Assembly and said Sinn Féin’s vote “meant nothing in real terms” and only showed “how individuals with high public profiles can attract electoral support”. But the main reaction was near panic at the thought that republicans might overtake the SDLP; the Fine Gael/Labour government that was elected in November 1982 attempted to shore up the SDLP and isolate Sinn Féin.

Sinn Féin made a major breakthrough in the Assembly elections of October 1982, 40 years ago this month.