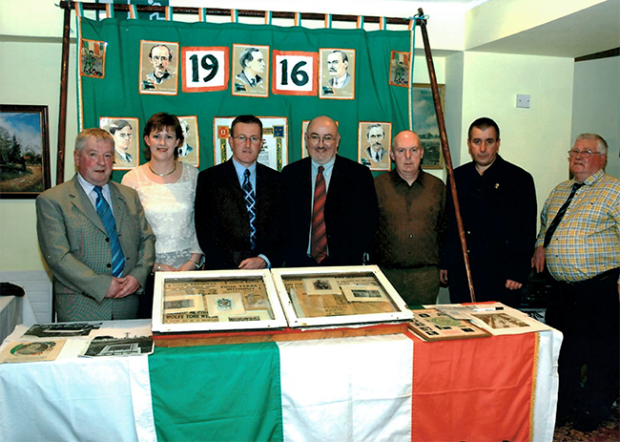 Republicans in Cavan, Monaghan and other neighboring counties experienced a deep sense of loss upon hearing of Kevin O'Reilly’s death just after Christmas last. Kevin from Belturbet in Co. Cavan was well known in republican circles in particular because of the long length of time since of his involvement in republican politics.

Kevin as a young man first became involved in the struggle at the time of Operation Harvest more often referred to as the Border Campaign which commenced in December 1956 and continued until early 1962, that is 65 years ago.

And when the Civil Rights campaign began in the late 1960s and the conflict developed in earnest particularly in the North, Kevin was once again actively involved in promoting in whatever way he could a united Ireland, supporting the call for civil rights for Nationalist people in the North, an end to partition and the establishment of a 32 county Irish Republic.

Kevin was a founder member of the Seán McIntyre Cumann in Belturbet. Kevin was always active in all election campaigns and continued to be right up until recent years where he would happily do whatever was necessary in elections: canvassing, putting up posters or broadcasting the republican message from the loud-speakers on top of his van.

This was particularly obvious in the 1981 H-Blocks campaign. Kevin was to the forefront of that campaign in Cavan where there were regular demonstrations held in Cavan town to protest about what was happening to the prisoners in the H-Blocks in Long Kesh and then of course the election campaign which saw Kieran Doherty elected TD for Cavan-Monaghan in June of 1981. I remember as a child attending those marches and when I became familiar with the figure of Kevin O'Reilly who would be one of the main organisers of the event.

Throughout this time when republicans were barred from the national airwaves through Section 31 of the Broadcasting Act, Kevin did his best to ensure the republican message was received by members of the public by selling first the United Irishman and then An Phoblacht throughout all of West Cavan initially on a monthly and then weekly basis.

Kevin like us all was immensely proud when history was made in 1997 which saw the election of Caoimhghín O’Caolain to Dáil Éireann. The day that Caoimhghín first entered the Dáil I met Kevin at the Lavey Inn, and we travelled together to get a bus in Carrickmacross which was bringing supporters from the constituency to Leinster House to witness this momentous event.  After seeing Caoimhghín into the Dáil we had a few hours to kill so we went into the National Museum which is located beside Leinster House.

I love history but Kevin adored it. He spent so much time in museums, libraries and graveyards and frequently travelled afar with his good friend TP Ennis researching things that had happened in the past especially in Cavan. They in particular had a huge interest in 1798 and took part in many bi-centennial commemorations in Dublin. I hope they are they are currently discussing history now in heaven.

Kevin had built up a huge quantity of republican memorabilia which he frequently displayed at various occasions and in particular at the centenary celebrations of the founding of Sinn Féin and during the All-Ireland Fleadh Ceoil when held in Cavan. Kevin seldom came to a meeting in Cavan without bringing some information to show to some of us at the meeting which could be an old An Phoblacht or information about the history of somewhere local.

He also attended all commemorations in Cavan and neighbouring counties and further field. Kevin was a regular participant at Comhairle Ceantair meetings in Cavan and was chairperson for a year.

Kevin had a long life and he dedicated so much of that life to Sinn Féin and the Republican struggle. He will be sadly missed by us all. I want to offer my sincere condolences to Kevin’s brothers Brendan, Gerard and his sister Maura and to all Kevin’s nieces, nephews, relatives and friends.

• Pauline Tully is a Sinn Féin TD for Cavan-Monaghan and spokesperson on Disability and Carers.