Protest against Bill of Shame at British Embassy 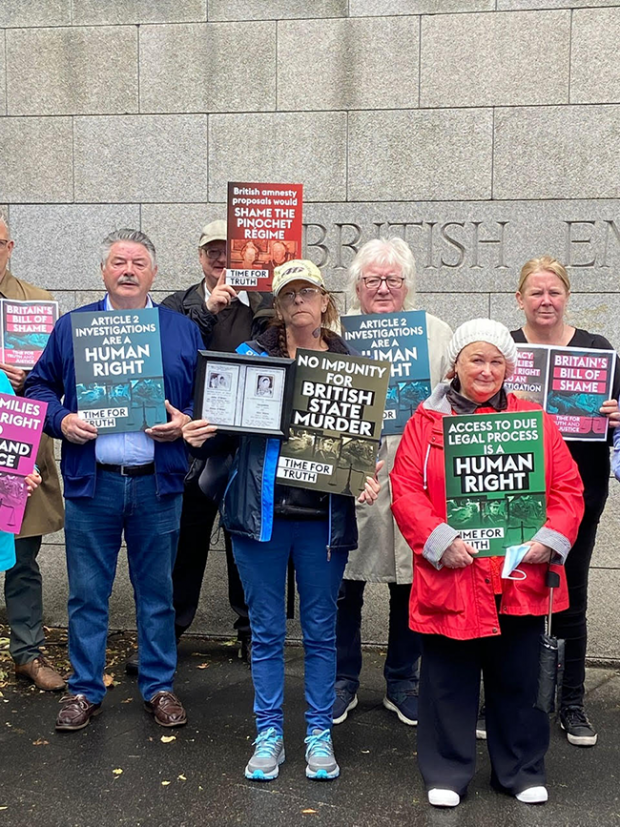 Relatives of those killed in the bombings of Dublin, Monaghan and Castleblayney joined a protest against what has been dubbed the Bill of Shame at the British Embassy in Dublin on 28 June.

Protests in Belfast, Derry and Dublin marked the passage to Committee Stage in the House of Commons of the British government’s Northern Ireland Troubles (Legacy and Reconciliation) Bill. It has already had two readings in the House of Commons – on 17 and 24 May. The Committee stage will be followed by the Report stage and 3rd Reading. The plan is that the Bill will be completed in the House of Commons by mid-July when Parliament goes into recess for the summer holidays. It is then expected before the House of Lords in September and the likelihood is it will be law by the end of this year. Speaking outside the British Embassy on behalf of Justice for the Forgotten, Margaret Urwin said:

“We are assembled here today outside the British Embassy in total opposition to this shameful Bill. The Irish Government and Opposition parties; all parties in the Northern Executive; the British Labour Party; the US Government  and, most importantly, all groups representing victims and survivors, across the board, are ALL opposed to this Bill.

“The unprecedented nature of this Bill would close down all future civil cases; all Police Ombudsman investigations; all future Inquests and, potentially, Operation Denton - now in the process of examining 127 killings on both sides of the Border - carried out by the group which has come to be known as the Glenanne Gang. This figure includes many killings that occurred in this jurisdiction and whose families are supported by Justice for the Forgotten.

“An expert group in the North known as ‘The Model Bill Team’ - which includes academics from Queens University and the Committee on the Administration of Justice - say that the Bill is unworkable; is in breach of the Good Friday Agreement and binding international law and cannot deliver for victims and survivors.  The Model Bill Team says the Bill gives the British government direct control over the establishment and operation of all its proposed mechanisms.

“The Secretary of State for NI, Brandon Lewis, intends to have a finger in every pie. It is, in short, a blatant power-grab by a key protagonist in the conflict. The British Government, instead of the blanket amnesty initially proposed, have now opted for a conditional amnesty with an incredibly low threshold for the granting of immunity. Unlike in South Africa, there would be no obligation to challenge any perpetrator’s admission to substantiate their integrity or truthfulness. The injured family would have no right to a hearing or legal representation.

"It is, in fact, a de facto general amnesty in all but name. According to the Model Bill Team, the provisions are HIGHLY unlikely to comply with the European Convention on Human Rights.

"Of course, we all know why the British Government wants to implement the Bill at the earliest opportunity.

"Firstly, they make no secret of the fact that they want to protect their army veterans from what they term so-called ‘vexatious’ prosecutions.

“Secondly, they’re worried that – thanks to the work being done by groups such as ourselves and the legal firms we work with – that existing mechanisms, while imperfect, are working too well in exposing past human rights abuses by the British State and its agents.

Just look at the outcome of the Ballymurphy Inquest where the Coroner found that those who died were entirely innocent of wrongdoing.

“I recently read an official declassified British Government file, intended as a narrative of the conflict in its early days, most likely written by an MoD official.  On Ballymurphy, the author wrote that ‘seven gunmen were shot dead while a woman’s body was found in a field’.  Without the Inquest findings, this would have remained the official narrative.

“The British Government want to call a halt to these type of findings to stop more information emerging about their illegal and collusive acts – acts they have tried to conceal for decades to uphold their narrative of the conflict. They are determined to prevent their true role in the conflict from being further exposed.

“No self-respecting judge, police officer/former police officer or historian should even consider becoming involved in this iniquitous proposal.  They should not touch it with a barge pole. The Pat Finucane Centre/Justice for the Forgotten do not intend having any engagement with structures established as a result of this legislation. We simply cannot recommend it to the families we support.”