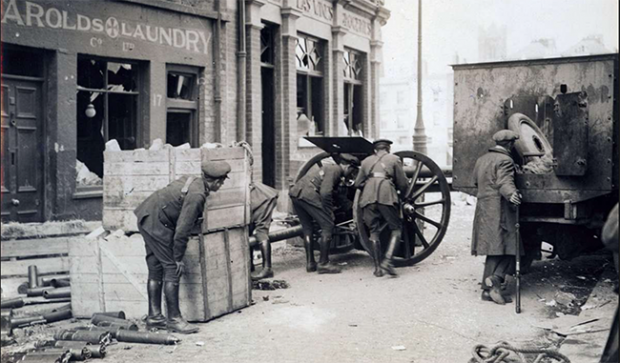 The threat of renewed war made by the British government at the end of the Treaty negotiations was finally carried out on 28 June 1922 but it was the Provisional Government of the Free State that started the threatened war using borrowed British guns.

The artillery attack on the Republicans in the Four Courts was ordered by Michael Collins, Chairman of the Provisional Government. It came after months of efforts to prevent civil war and to reconcile pro- and anti-Treaty forces both political and military. Throughout these efforts the British government maintained relentless public and private pressure on the Free State government to adhere strictly to the Treaty and to move decisively against the anti-Treaty IRA. 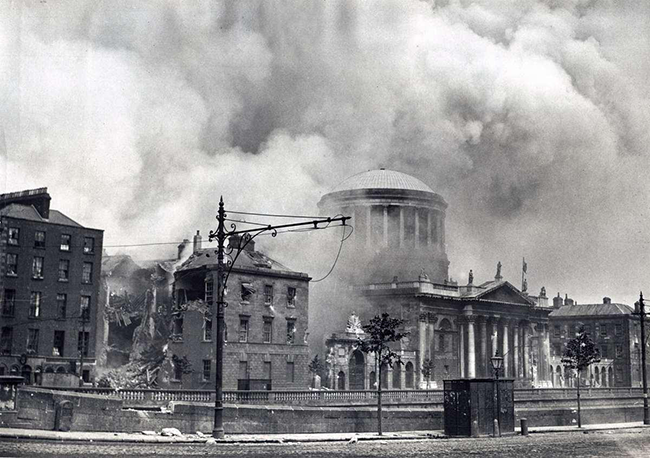 There were negotiations between military officers on both sides, an abortive joint offensive in the Six Counties, an attempt to frame a Free State Constitution that went beyond the Treaty and talks that led to the Collins-de Valera election pact. But the furious British government binned the draft constitution and denounced the Pact. The Pact was duly broken and a British-dictated constitution adopted by Collins and Arthur Griffith. The Free State claimed victory in the General Election on 16 June, though it was far from a clear-cut pro-Treaty victory given that the Treaty as such was not put before the voters and the Constitution was only published on polling day.

Despite this breakdown, Collins still did not move against the Four Courts. On 22 June in London British Field Marshal Henry Wilson, one of the most senior officers in the British Empire and military advisor to the Unionist regime in Belfast, was shot dead in London by two IRA volunteers. 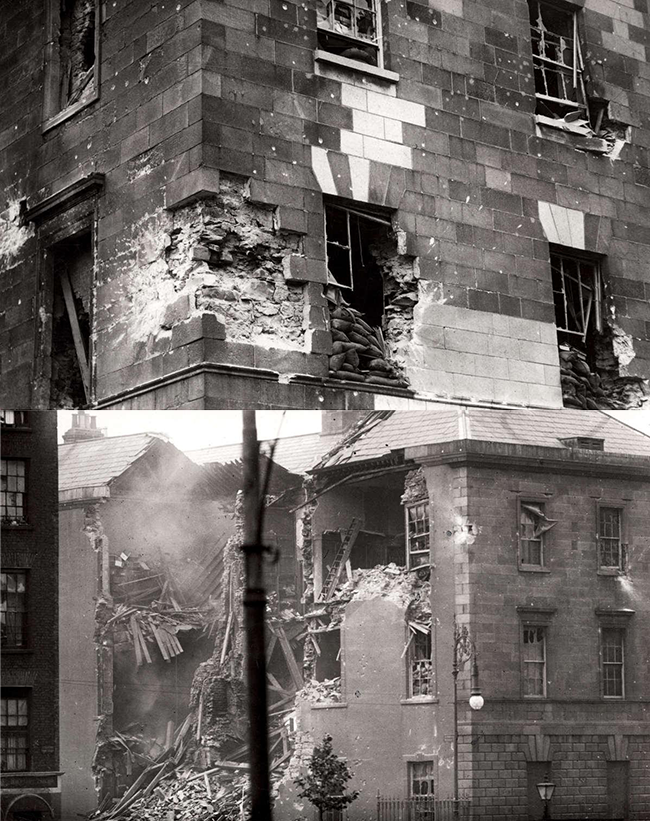 Did the London IRA act on old or new orders from Collins or on their own initiative? There is some evidence that Collins ordered the operation. He is alleged to have met one of the two Volunteers, Reginald Dunne, in Dublin in June. It is generally accepted that the orders did not come from the IRA in the Four Courts. But seizing the opportunity, the British government immediately blamed the IRA in the Four Courts and demanded an attack by Collins.

Even at this stage Collins still held back. British Army chief in Dublin, General Macready, was summoned to London to discuss an assault on the Four Courts by the British Army. He strongly opposed this, saying it would serve to reunite pro- and anti-Treaty forces against the British. On 25 June Macready, back in Dublin, received orders not to proceed.

The next day in the House of Commons, Winston Churchill piled on the pressure and declared that if action was not taken against the Republicans by the Free State then “we shall regard the Treaty as having been formally violated”. He pointed out that the British had supplied the Free State with “50,000 stand of arms and all the equipment necessary”. 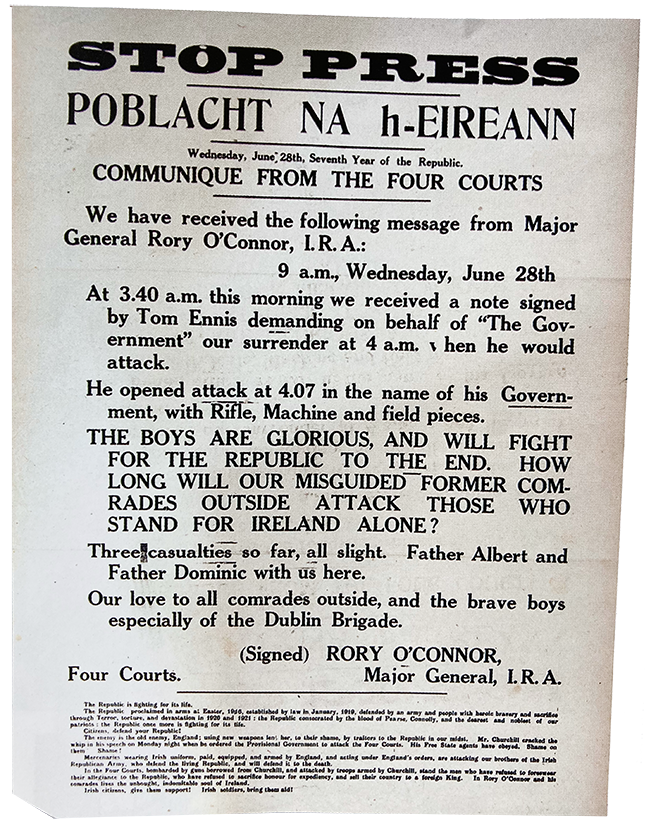 That same day, 26 June, the IRA in the Four Courts ordered the confiscation of 16 cars from the firm of Ferguson’s in Dublin. This was for a convoy to go North to assist the beleaguered nationalists. It was, ironically, exactly the type of operation in which Collins had been co-operating with the IRA only the previous month. IRA officer Leo Henderson was arrested by the Free State and jailed in Mountjoy, even though there was still a truce between the two sides. In response the IRA arrested Free State deputy Chief of Staff General J.J O’Connell and held him in the Four Courts.

Collins was now under pressure from both the British and his Provisional Government colleagues. He may have calculated that an assault on the Four Courts would not necessarily lead to outright war given that, as he believed, the anti-Treaty IRA was divided. This had been the case but unknown to Collins, the disagreement between the IRA in the Four Courts and IRA leader Liam Lynch outside had been overcome and they were co-operating again. The attack when it came would further consolidate that unity in defence of the Republic, though the IRA’s position was to remain just that, defensive, throughout the war that followed. 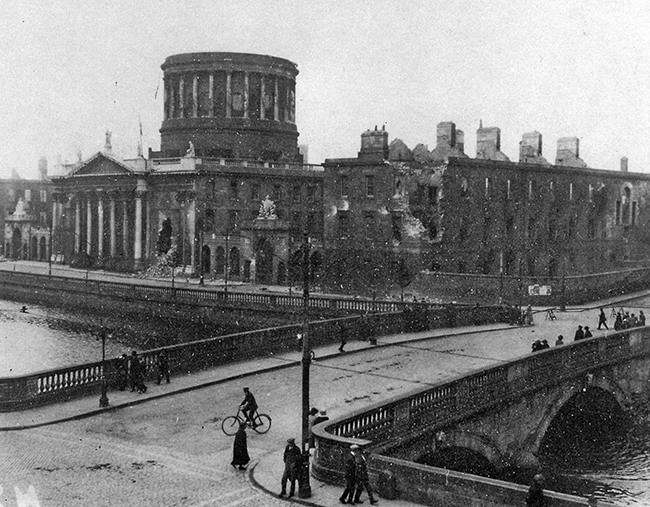 On 27 June the IRA received word from a source in Free State HQ in Beggars Bush barracks that an attack on the Four Courts was imminent. The IRA garrison was placed on alert and barricades were strengthened. The Dublin Brigade was mobilised and posts in the city were prepared.

On orders from London, Macready handed over two 18-pounder field guns to the Free State army. Tom Ennis of the Free State Army, at 3.40am on 28 June, sent a note into the Four Courts demanding surrender by 4am. There was no surrender and at 4.07am the borrowed British guns opened up on the Republicans in the Four Courts, the first shots of the Civil War, 100 years ago this week. 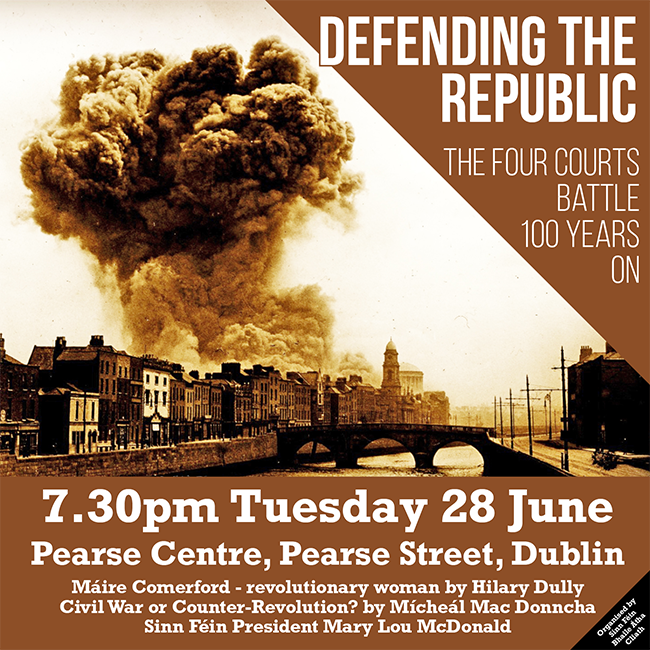