The IRA Convention of March 1922 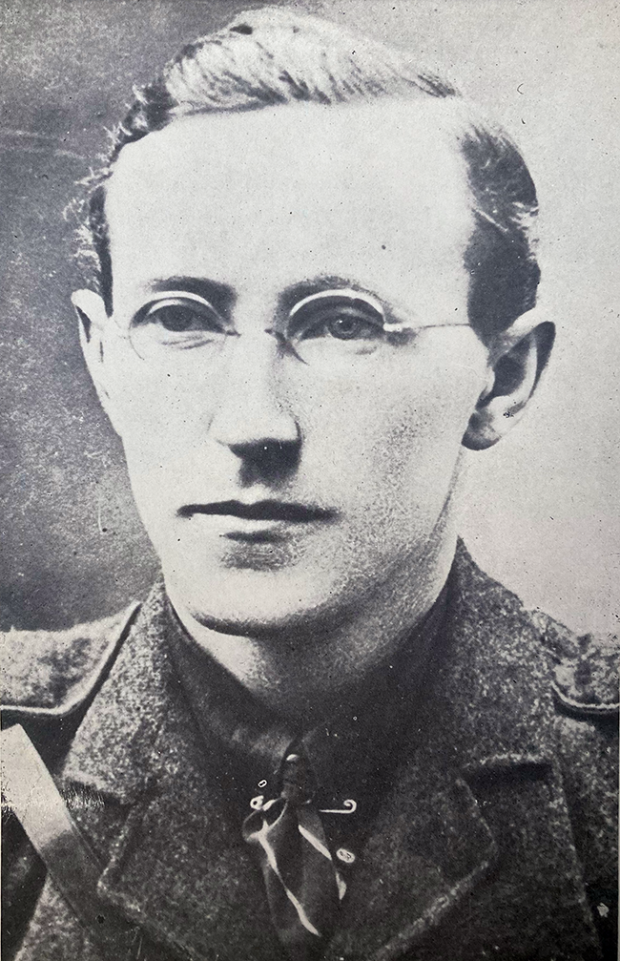 The period after the narrow Dáil vote in favour of the Treaty in January 1922 saw division between the pro and anti-Treaty sides widening but also many efforts to maintain unity and to prevent armed conflict.

Three key factors in this period were to lead to the failure of these efforts and to Civil War in June 1922. These were: the split in the IRA which proved impossible to prevent; the establishment of the Free State army; the enormous pressure from the British government on the Free State Provisional Government to stamp out the anti-Treaty IRA.

On the political side the situation was confused. While the anti-Treaty TDs walked out of the Dáil in protest in the aftermath of the vote, they returned and meetings of the Dáil with both sides participating were held in the first half of 1922. The Dáil had a pro-Treaty Cabinet led by Arthur Griffith. Parallel with this was the Provisional Government established under the Treaty and led by Michael Collins. This body was implementing the Treaty and recruiting a new Free State army.

The Sinn Féin TDs were split on the Treaty but all wished to prevent a formal split in the organisation itself and this was avoided for the time being. In February Cumann na mBan at its Ard Fheis rejected the Treaty by a large majority.

The split in the IRA was by no means immediate after the Dáil vote on the Treaty. Both sides declared their wish to maintain unity and to continue as the Army of the Republic. Division was to come on the question of control of the Army and on its right to hold its own Convention. 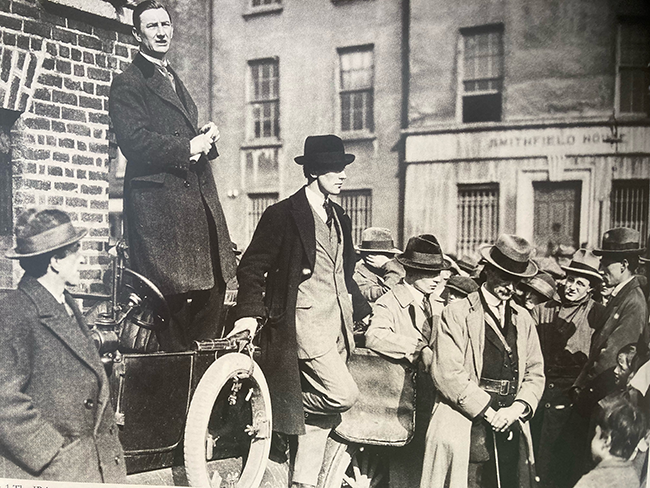 On 11 January Anti-Treaty members of the IRA’s GHQ staff Liam Mellows, Rory O’Connor, Seán Russell and James O’Donovan, six Divisional Commandants and the OCs of the Dublin Brigade and South Dublin Brigade, wrote to Defence Minister Richard Mulcahy requesting him to call an Army Convention. It was proposed that the Convention would reaffirm Army allegiance to the Republic and elect an Executive which would have supreme control of the Army.

On 18 January Mulcahy convened a meeting of GHQ Staff, Divisional Commandants and OCs of Brigades not yet in divisional structures. This meeting agreed to set up a monitoring group representing both sides and to hold an IRA Convention within two months. The date was later fixed for 26 March.

The Dáil Cabinet (Pro-Treaty) on 27 February agreed to the holding of the IRA Convention. Local meetings to elect delegates were organised 12-14 March with both pro and anti Treaty officers and volunteers involved. Then on 15 March Mulcahy advised the Cabinet that he believed the Convention would not pass his resolution but would decide, as previously signalled, to reaffirm allegiance to the Republic and elects its own Executive.

Mulcahy’s report was effectively an admission that the large majority of the IRA’s rank and file, as represented by delegates to the Convention, were against the Treaty. He predicted the outcome as the establishment of “a body regarding itself as a Military Government”. The cabinet then did a u-turn and banned the Convention. Arthur Griffith issued a proclamation announcing the ban and saying the Convention would seek to remove the Army from Dáil control.

In his book ‘No Other Law’, Florence O’Donoghue, then a senior anti-Treaty IRA officer close to these events, states that the eventual outcome of the Convention  was not inevitable and that if the pro-Treaty side had not banned it but participated there may well have been a more conciliatory result. However the ban meant Volunteers faced dismissal by the pro-Treaty Defence Minister Mulcahy and Chief of Staff Eoin O’Duffy if they attended, and so positions were hardened. 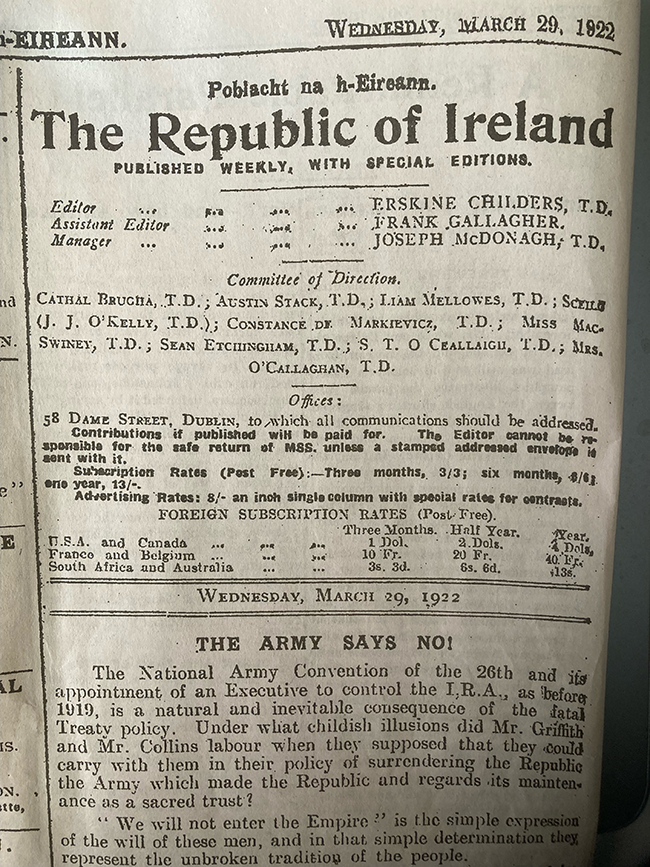 The IRA Convention met in Dublin’s Mansion House on 26 March 1922. All elected delegates, regardless of their position on the Treaty were invited. Liam Mellows presided and 211 delegates were present. Munster and Connacht, where most of the fighting 1919-1921 took place, were strongly represented and Cork’s Liam Lynch headed the poll in the election to the new 16-member Executive. The Convention passed the following resolution:

In an editorial on 29 March the new Republican weekly paper ‘Poblacht na hÉireann - the Republic of Ireland’ asked:

“Under what childish illusions did Mr Griffith and Mr Collins labour when they supposed that they could carry with them in their policy of surrendering the Republic the Army which made the Republic and regards its maintenance as a sacred trust?”