The long road to justice for the Bloody Sunday victims 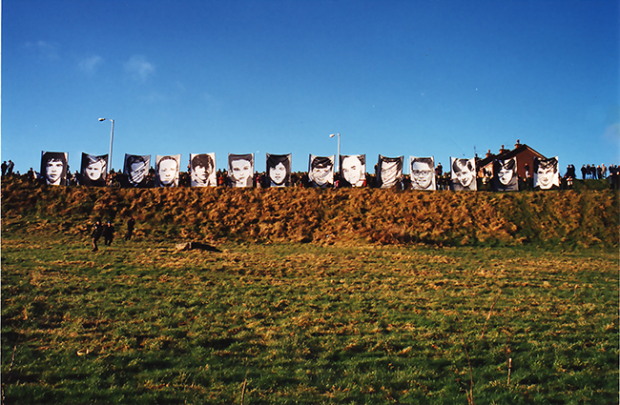 He shows how the seeds of Bloody Sunday were created in three key events: the introduction of internment on 9 and 10 August 1971; the Ballymurphy Massacre by the 1st Battalion Parachute Regiment a day later; and the Civil Rights march to Magilligan Internment Camp on 22 January 1972.

Operation Demetrius was a British Army action in the Six Counties on 9 and 10 August 1971. It involved mass arrests and internment of people suspected of being Republicans. This draconian response to modest civil rights demands was proposed by the Unionist government and supported by the British cabinet. Armed soldiers launched dawn raids and arrested 342 men in the initial sweep, sparking four days of violence in which 20 civilians, two IRA members, and two British soldiers were killed. All of those arrested were Irish republicans and nationalists.

Loyalist paramilitaries were very actively conducting acts of sectarian violence, directed against Catholics and Irish nationalists. Collusion, always a constant issue in the North, meant that no loyalists were included in the sweep. 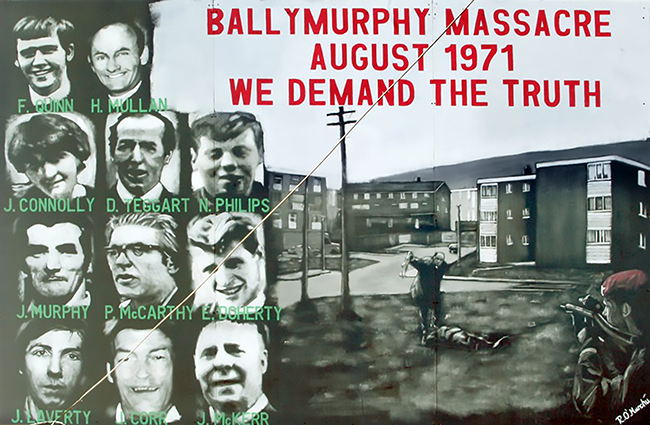 In Ballymurphy, 10 civilians were shot and died between the evening of 9 August and the morning of 11 August, while another died later of heart failure.

Members of the Parachute Regiment claimed that they were shot at by Republicans as they entered the Ballymurphy area and returned fire. The British Army press officer, Mike Jackson, later to become head of the British Army, includes a false account of these shootings in his autobiography, stating that those killed in the shootings were Republican gunmen.

Finally, on the 11 May 2021, a coroner’s inquest declared that the 10 civilians were innocent, and the use of lethal force by the British Army was “not justified”. The circumstances of the 11th death were not part of the inquest, since Paddy McCarthy died from a heart attack, after being subjected to a ‘mock execution’ by paratroopers. 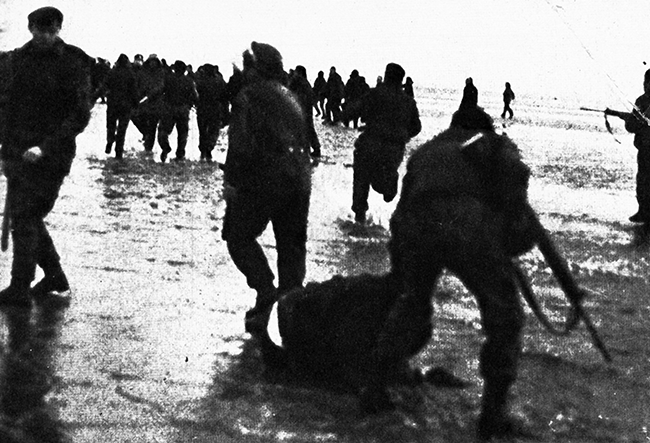 A Civil Rights march was organised to the internment camp at Magilligan Prison. Up to 1,500 people, mainly from Derry, took part in the march.

The perimeter fence of the internment camp was being patrolled by the 1st Battalion of the Parachute Regiment. Less than six months previously, this regiment had murdered eleven civilians in the ‘Ballymurphy Massacre’.

As the marchers approached the camp, the ‘Paras’ fired rubber bullets, then baton charged the crowd. According to Derry doctor Raymond McClean, who was on the march:

“… the soldiers charged forward with batons waving, smashing into everyone in sight. The crowd broke in panic, and we started running back across the sand, through water, sand, seaweed and whatever came in the way.”

The marchers retreated back to the safety of their buses, battered, bruised and shocked in their first encounter with the 1st Battalion of the Parachute Regiment. 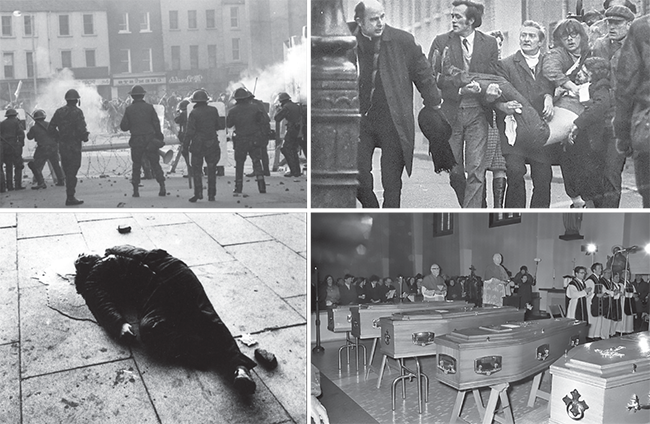 NICRA had called on people to come to Derry to protest against internment without trial, and on that bright, crisp wintry afternoon, 15,000 people gathered in Creggan to march to support that call.

The 1st Battalion of the Parachute Regiment, responsible for the Ballymurphy Massacre and the attack on the peaceful marchers at Magilligan, had been drafted into the city.

These preparations went largely unnoticed by the marchers, aware that the IRA had given assurances that they would stay away from the march. The marchers’ expectations of a peaceful day was evidenced by the large numbers of women and children who took part.

As the march approached the army barricades at the bottom of William Street, the lorry leading the parade and the bulk of the marchers turned towards Free Derry Corner. A group of several hundred, mostly young people, continued along William Street and came to Barrier 14, which was blocking the road into the city centre.

What followed was the standard Derry riot; stones and bottles against rubber bullets, CS gas, and water cannon. This was an almost daily occurrence in Derry at the time, and as the platform speakers prepared to start the meeting, the stone-throwing eventually petered out. Nothing seemed out of the ordinary, just another ordinary day, with an ordinary march and an ordinary riot, just another day in Free Derry.

But that day was anything but ordinary. Soldiers of 1 Para opened fire with live rounds and in less than half an hour, in an area not much larger than a football field, British Army soldiers had killed 13 unarmed men and wounded two women and 16 men, one of whom would later die of his injuries. All but the first two casualties had been shot in a devastating assault which lasted less than 10 minutes.

On 30 January 1972, Derry and the world awakened to a new day just like so many others but for many families in Derry that day would change their lives forever.

General Ford, Commander of the British Army in the North, went on television almost as soon as the shooting stopped. He claimed that his soldiers had only fired four shots and that if there were any more than four bodies, they must have been shot dead by the IRA. 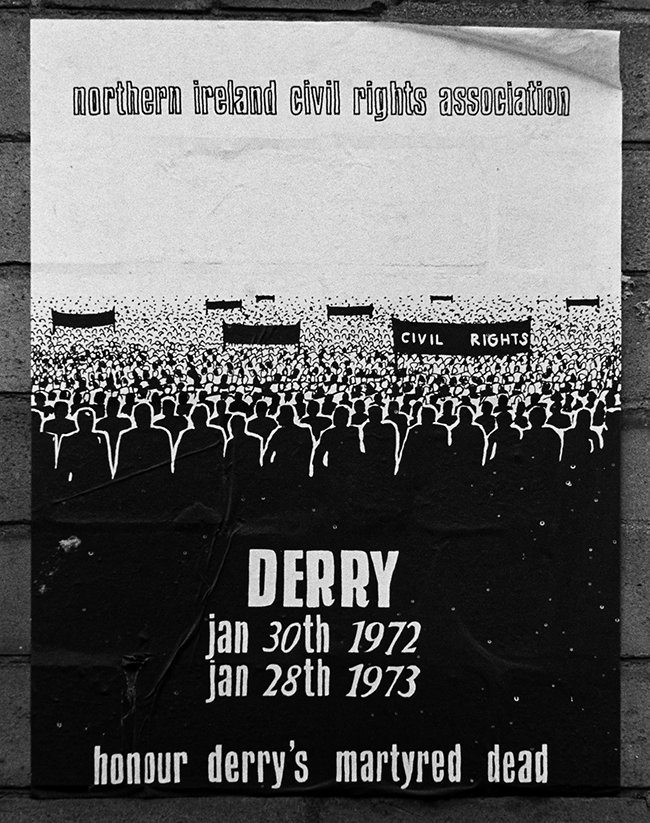 This was the version that went to the media around the world, courtesy of the British Information Service.

Jackson had been present in Ballymurphy and had provided an identical explanation of the murderous assault on civilians in West Belfast. As in Belfast, the voices from Derry trying to speak the truth were drowned out by British propaganda.

On 1 February, British Prime Minister Edward Heath announced that a public inquiry into the events of the day would he held, to be chaired by the Lord Chief Justice, Lord Widgery.

The Bloody Sunday funerals on 2 February were massive events, attended by political, civic, and religious representatives from around the world.

The Widgery Tribunal opened on 21 February, closed in March after just 17 days of hearings, and exonerated the killers. Widgery decided not to sit in Derry and set up shop in the County Hall in Coleraine. The Tribunal heard evidence from 114 witnesses, of whom only 30 were Derry civilians despite the fact that hundreds of witnesses had given statements to NICRA. Widgery accepted the doctored statements provided by the Paras and concluded:

"There would have been no deaths in Londonderry on 30 January if those who organised the illegal march had not thereby created a highly dangerous situation in which a clash between demonstrators and the security forces was almost inevitable". 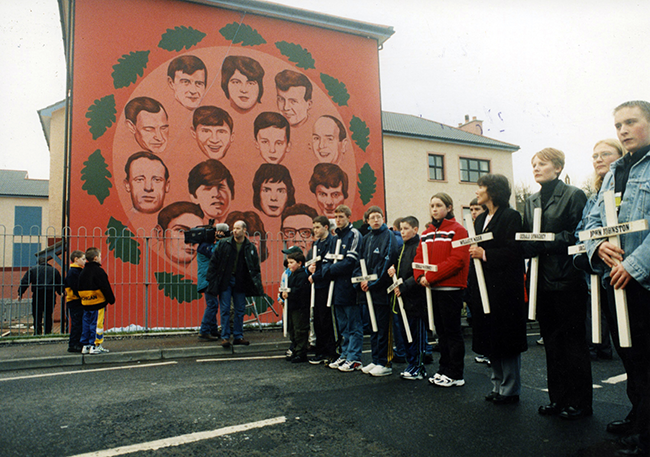 In 1987 after reviewing the years of protest since 1972, a small group of relatives, Sinn Féin members, and campaigners came together to form the Bloody Sunday Initiative in an attempt to reopen the subject of Bloody Sunday in the wider public consciousness, outside of its traditional republican support base, and to place it in the context of wider human rights issues. Key to this discussion was agreement that the families should provide the leadership with ongoing support from Sinn Féin.

The Bloody Sunday Weekend Committee was established to take on responsibility for the annual commemoration.

As part of a major series of events to mark the 20th anniversary of Bloody Sunday – under the theme of One World, One Struggle – a meeting was organised in Pilots Row to which members of the Bloody Sunday families and others were invited to discuss the way forward. Out of that meeting, the Bloody Sunday Justice Campaign (BSJC) was born.

The BSJC had three demands:

1. That the British Government should publicly and unambiguously acknowledge that all those killed or injured were totally innocent.

2. That the British Government publicly repudiate the Widgery Report in its entirety.

3. That those responsible for the Bloody Sunday murders and attempted murders be prosecuted.

For the next six years, the BSJC campaigned relentlessly for the truth to be told about the events of Bloody Sunday. A seemingly hopeless campaign at times; it had its high points as hitherto secret documents came to light exposing the British Government and Army’s intentions on Bloody Sunday and afterwards and the wider media began to take an interest in the story. Slowly, support for the campaign began to grow well beyond its Derry base.

By the latter part of the 1990s, the campaign was beginning to gather an unstoppable momentum. On the 25th anniversary, 40,000 people marched in support of the BSJC. In the same year, the publication of Eyewitness Bloody Sunday by Don Mullan placed the original witness statements taken by NICRA and NCCL back in the public domain. 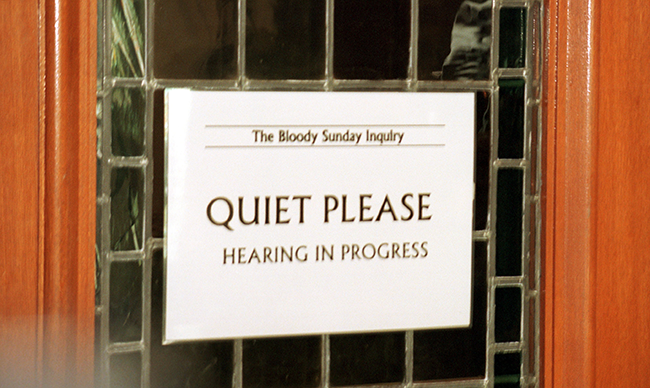 The Bloody Sunday Trust (BST) was set up to aid the families’ campaign and it commissioned Professor Dermot Walsh to write ‘The Bloody Sunday Tribunal of Inquiry: A Resounding Defeat for Truth, Justice and the Rule of Law’, an unanswerable destruction of Widgery and the soldiers’ evidence which again showed the Widgery Tribunal up for the farce that it was. The Irish Government came on board and in the summer of 1997 presented their own analysis of Widgery and the new evidence that had come to light to the newly elected Labour Government in Britain.

On 29 January 1998, British Prime Minister Tony Blair announced the setting up of a new inquiry into the events of Bloody Sunday. It was an unprecedented move – never before in British legal history had a second inquiry been set up into any event.

The inquiry, under the chairmanship of Law Lord Mark Saville, held its first hearing in the Guildhall in Derry in April 1998. It heard its last witness at the same venue in January 2005 and was the longest and most expensive inquiry in British legal history. 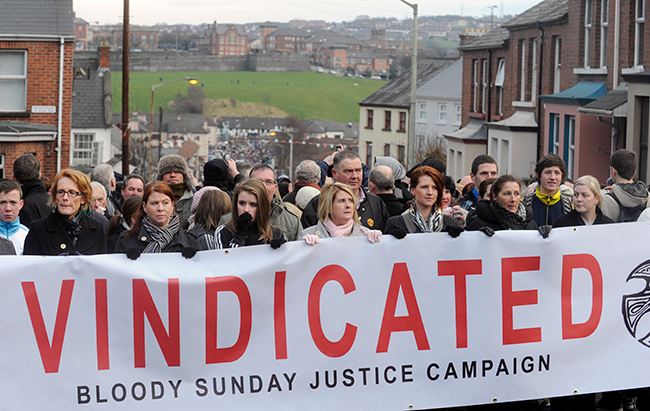 On 15 June 2010, the report was finally released. The thousands of people gathered in Guildhall Square that day to support the families listened as one by one each victim was declared innocent. They heard the British Prime Minister apologise for Bloody Sunday and describe the events of that day as “unjustified and unjustifiable.”

The family members and their supporters, the years of campaigning finally vindicated, left the Guildhall knowing that they had achieved most of what they had set out to do; the Widgery Report was in the bin, their loved ones innocent in the eyes of the world.