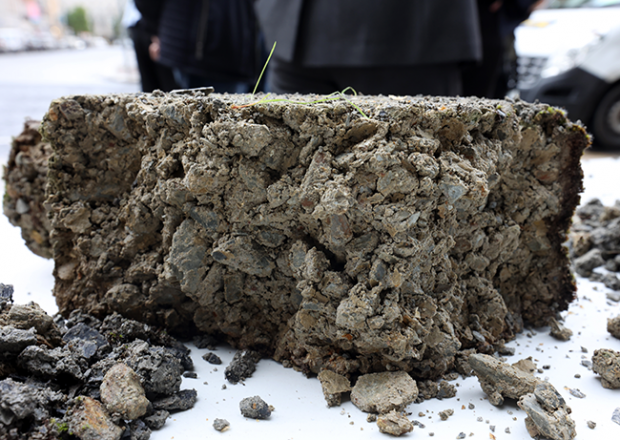 • Mica and Pyrite – Thousands of families homes are crumbling around them

We need 100% redress for our families with crumbling homes. Sinn Féin TD Pádraig Mac Lochlainn writes on the personal experiences of those directly affected by the ongoing Mica and Pyrite scandal

Thousands of families from the west of Ireland have had their lives torn asunder by the mica and pyrite scandal. Their homes are crumbling around them. This is a national disaster. It is an earthquake happening in slow motion.

The human toll of this ordeal has been heartbreaking. This has led to unbearable mental distress for families. I know families and people who have been close to emotional breakdown. These people are close to financial ruin. They say that their very lives have crumbled around them with their homes. For them, the dream has turned into a living nightmare.

I live in Buncrana, the epicentre of this disaster in north Donegal. This scandal has left deep scars on our community. It is agonising to see neighbours, friends, and family suffer in this way.

The trail of devastation winds its way through communities that share the sorrow and anger of their families, friends, and neighbours. These communities range from my own in north Donegal, down through counties Sligo, Mayo and on to Clare, Limerick, and Tipperary. 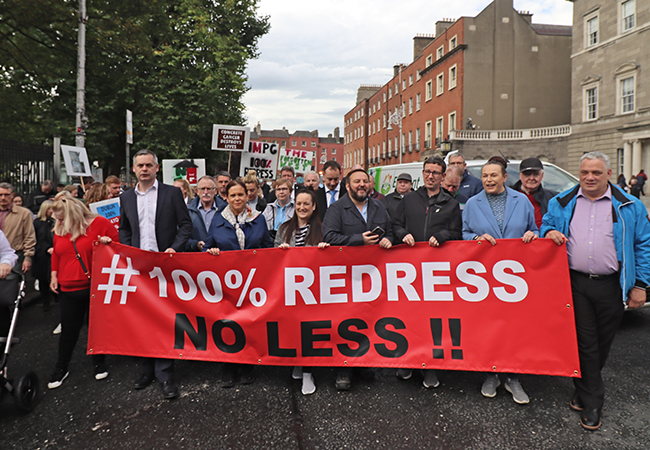 • A people’s revolution erupted in Donegal, the revolution spread to Mayo and down the West of Ireland

The cause of this crisis is beyond dispute. In June 2017, the ‘Independent Expert Panel on Concrete Blocks’ established by the government found that the cause of the crumbling homes in Donegal and Mayo was the “excessive amount of deleterious materials (muscovite mica and pyrite) in the constituent aggregate used to manufacture the concrete blocks”.

The State had introduced regulations as far back as the 1940s limiting the amount of the destructive minerals, muscovite mica and pyrite, in the manufacture of concrete blocks but the State failed to enforce these regulations. This infamous practice of self-regulation in the building industry reached a crescendo during the Celtic Tiger building boom.

Eoin Ó Broin’s recently published book, ‘Defects – Living with the legacy of the Celtic Tiger’ demonstrated that the devastation of the mica and pyrite scandals for thousands of families, as well as that caused by the many construction defects in other homes across the State, is the outworking of the repeated and wilful failure of Fianna Fáil and Fine Gael governments to strengthen our building control laws and regulations or to enforce the limited regulations that were in place. Often because of the close relationship between key figures in those parties with the building and construction industry.

Following many years of campaigning by the affected families in Donegal and Mayo, the last government finally agreed to introduce the Defective Concrete Blocks Grant Scheme.

Unlike the Pyrite Remediation Scheme that over 2,000 families in Dublin and North Leinster have availed of, the grant scheme available to the families in Donegal and Mayo only covers 90% of the cost of repairing or rebuilding their homes. The cost of rent while having to leave the family home during the works is not covered nor is the replacement of windows and kitchens. There is a financial limit to what each family can apply for and the clear understanding that financial supports would be forthcoming from the banks, has amounted to nothing.

It is now estimated that the real costs for a family in Donegal and Mayo who must demolish and rebuild their home will be significantly more than what is envisaged in the current scheme. For some it will mean a second mortgage and eventual homelessness for the many who can’t afford to pay these huge sums.

After their years of patient campaigning, the limitations and the injustice of the Defective Concrete Blocks Grant Scheme has been the final straw. Earlier this year, a people’s revolution erupted in Donegal, sparked by the actions of one of the affected homeowners, Paddy Diver. 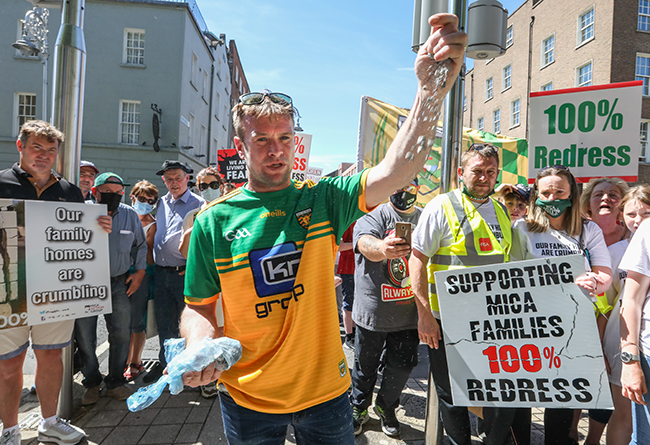 Paddy starting blocking deliveries to private and public building projects from the company who had supplied him with defective concrete blocks and soon large numbers of other affected families joined him. Very quickly, their anger turned on the government and their so called 90% grant scheme and the total absence of any support from the banks.

The clarion call became “100% Redress, No Less”. Soon, the revolution spread to Mayo and down the West of Ireland.

Twice this year, the families have taken their campaign to the centre of power in Dublin. On 15 June, thousands marched from the National Convention Centre to Government Buildings and on 8 October, the number of protestors doubled to tens of thousands marching from the Garden of Remembrance to Custom House.

On the day of the 15 June protest, the Dáil unanimously passed a motion instructing the Government to provide 100% redress. Five months on and still the government has not acted. Still, the nightmare continues.

Speaking on radio recently, 12 year old MacKenzie McDaid spoke about how living in a Mica affected home is impacting her. She said:

“I worry when I go to sleep that the roof is going to fall on top of me. I was sleeping in my bedroom and I heard a big bang and a big pile of plaster had fallen off the wall.”

“There are 15 out of 16 in my class who have mica and know that they have mica. We would be very worried and we kind of comfort each other by talking to each other about it.”

These are absolutely heart-breaking words to hear come out of the mouth of a 12 year old child. This needs to be brought to an end.

Our families with crumbling homes have found their strength after all the years of despair. They have told their stories with courage and dignity. And they have won the hearts and minds of our people across the country.

They have done nothing wrong. They are the victims of the scandal and the corruption of light touch regulation, self-regulation, and no regulation.

The government must do what is right and what is just. They must finally deliver 100% Redress.

Pádraig Mac Lochlainn is a Sinn Féin TD for Donegal.