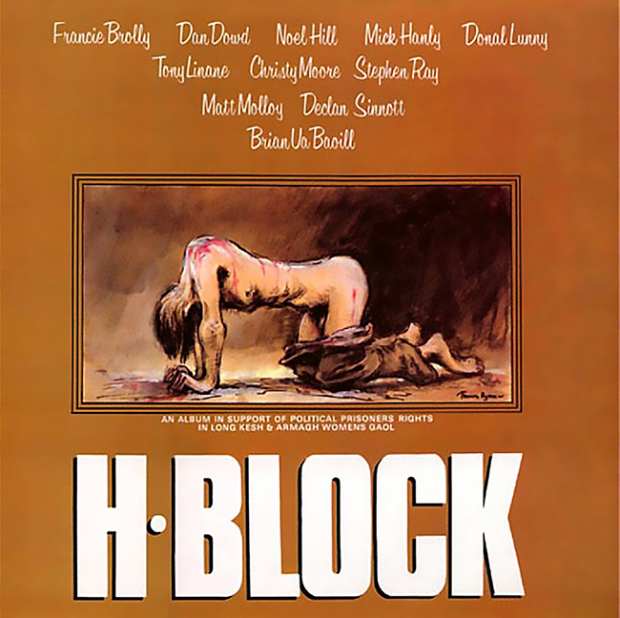 I had the pleasure of being invited to say a few words at the relaunch of the album, H-Block, held on Friday 15 October at the Felons Club, Falls Road, Belfast.

It was a very special evening. An intimate gathering. An occasion to meet again with former friends and comrades, male and female ex-prisoners, relatives of some of those who died on hunger strike. And to once again hear Christy Moore play was extra special. As I said to him backstage after the performance, “Your voice is as strong and as powerful as ever, your politics as clear as before, and your music as melodic as ever.”

Ireland is known as a land of storytellers and often it has been through poetry, verse, and song that the story has been told; the battles fought, the persecutions endured, and the plight of our people revealed. The fact that many such songs were passed down orally down through the centuries and have endured to this very day is an indication of their worth and how we value them.

They are songs that give us hope, move us to tears, validate us, vindicate us. 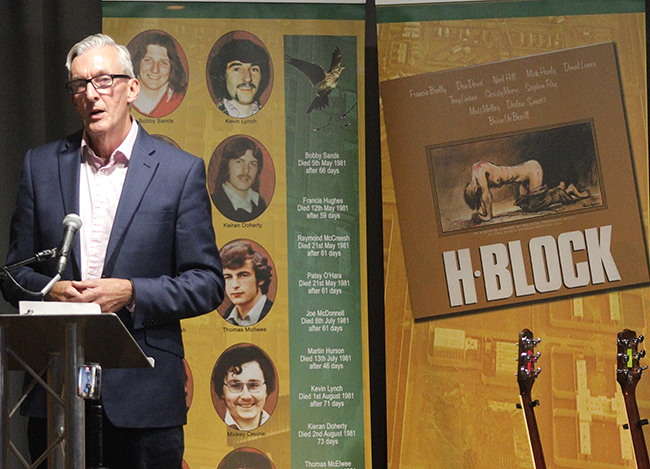 • Laurence McKeown at the relaunch of the 'H-Block' album

Likewise, the songs, the music, and the spoken word on this album are as powerful today as they were when first recorded in 1979 when word of the protests in the H-Blocks and Armagh Gaol was only just beginning to reach a wider audience.

Once again, it was the artists, the singers, the song-writers, the musicians, the actors who were the storytellers. We wrote letters to them from our prison cells, calling upon them for support and, as always down through history, they rallied to our call.

That was no mean feat. In the midst of one of the most aggressive military, political, and media onslaughts against republicans at that time, those artists dared to put their heads above the parapet. 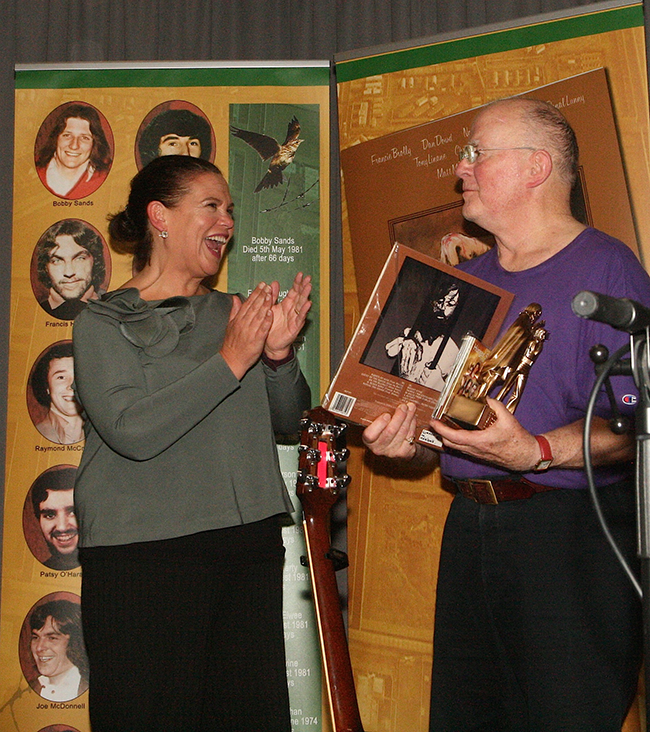 When censorship under Section 31 in the South and the media broadcasting ban in the North prevented republicans from speaking out on our behalf, it was the artists who stepped forward. Through their music and verse, they reminded others, some of whom were quick to forget their own recent past or who were engaged in rewriting that past, that what was happening in the prisons in the North was the same struggle as always. The ‘unfinished business’, the legacy of the Partition of our country.

We who experienced the prison protests are indebted to those artists, and to the many others, who stood firmly with us. Their actions at the time were not going to endear them to the ‘great and the good’, win them any favours, assist them in their careers; but then the role of the artist is never to pay homage to those who lord over us or attempt to tell us what is best for us. Their role is to be the soul of the people, to ‘speak to the community’, to speak truth to power. As Nina Simone once said, “An artist’s duty … is to reflect the times.” 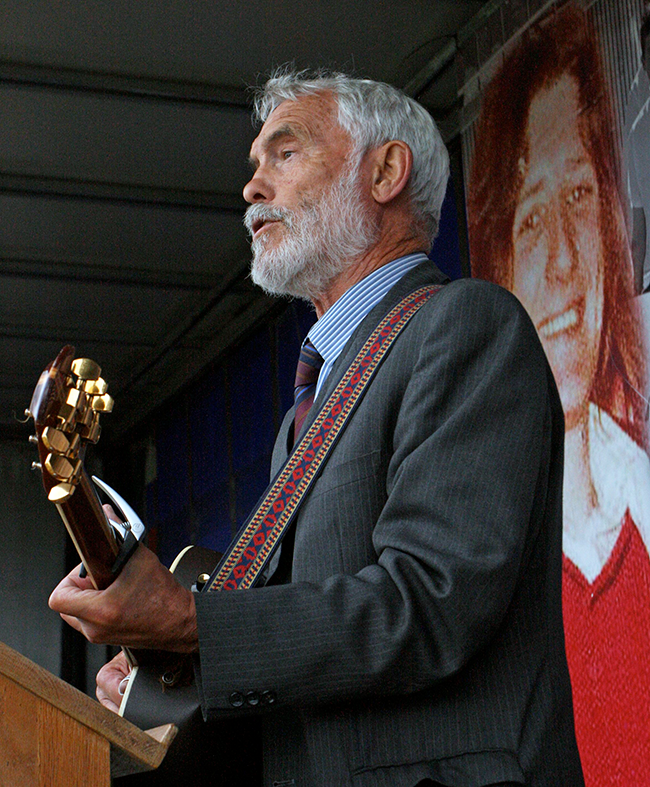 • ‘I’ll wear no convict’s uniform nor meekly serve my time’, a song that completely encapsulate the prison protest, here been sung by its writer,  Francie Brolly at a National Hunger Strike commemoration in Dungiven, Co. Derry

One song on the album that completely encapsulates for me our prison protest in the most succinct manner possible is Francie Brolly’s, ‘I’ll wear no convict’s uniform nor meekly serve my time’. Francie wrote it in 1976 right at the start of our protest. The artist totally in tune with the moment and what was happening around him.

“Does Britain need a thousand years

Of protest, riots, death and tears?

Or will this last decade of fears

An end to Ireland’s agony

And will the last obscenity

Be this grim H-Block cell.

But I’ll wear no convict’s uniform

Nor meekly serve my time

The other song on the album that says so much about that time and which was written by Christy Moore following a visit he had with Bik McFarlane in the H-Blocks, is, ’90 miles to Dublin town’.

“Though its ninety miles from Dublin it seems so far away

There's more attention to our plight in the USA

Now you’ve heard the story of this living hell

Remember ninety miles away I’m in my H-Block cell.” 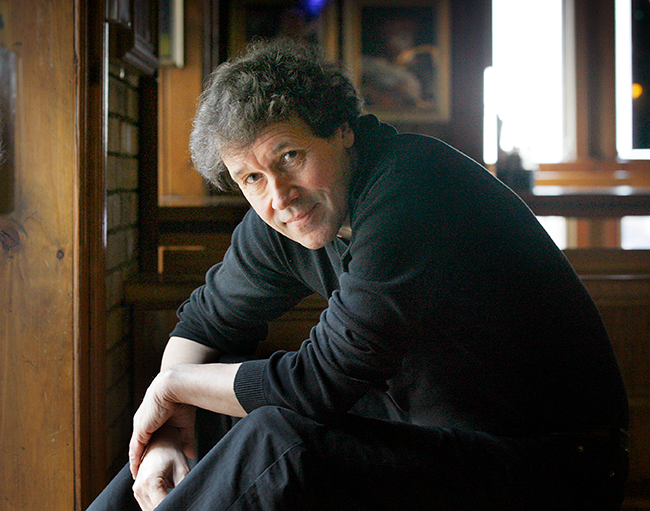 • Stephen Rea, wasn’t afraid to show his support by reading prisoners’ poetry on the album

As with Francie Brolly’s song, Christy’s lyrics captured what was clearly there to be seen – if one chose to look. The H-Blocks and Armagh Gaol were only 90 miles from Dublin town – much closer to Dublin than many major cities in the south; Cork, Limerick, Galway. But partition, Section 31, an internalised post-colonial mindset and selective amnesia, coupled with vested political interests and ambitions, meant that our protest was better known about in the USA than it was 90 miles down the road from us.

By referring to those two songs and singers on the album, I don’t wish in any way to take away from the many others who contributed to it. I think a special thanks to actor Stephen Rea in particular is warranted. A Protestant from East Belfast who was not afraid to voice his support for us by reading prisoners’ poetry on the album.

We’re in a much different place now than those dark days of 1979. Sinn Féin is the largest party on the island and republicanism is much stronger, more diverse and inclusive than it has ever been. The H-Blocks and Armagh jail have long since closed, remaining only as a testament to the folly of British rule in Ireland.

To the artists of our land, a huge thank you. When we were in need, you stood with us. You gave us hope, moved us to tears, validated us, vindicated us.

Let your song and verse forever play on. 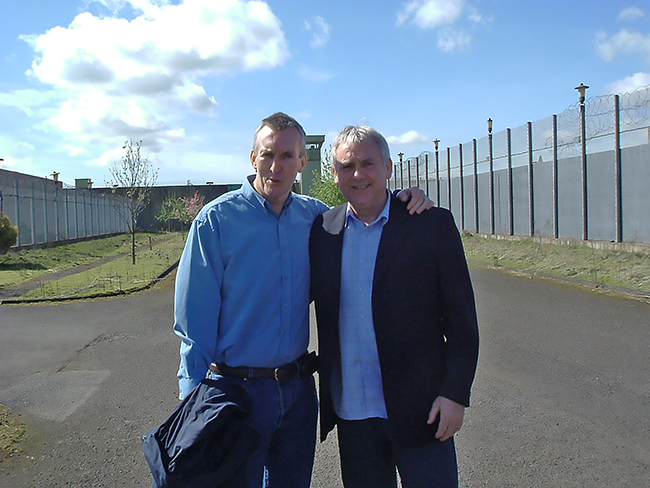 • Laurence McKeown and Bik McFarlane back in the H-Blocks, May 2007

Laurence McKeown is a writer, playwright, and former political prisoner