Renewed pogrom in the Orange state 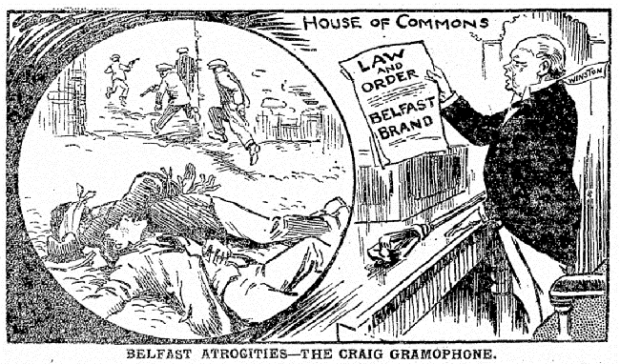 A century ago in February 1922 the pogrom against Catholics, nationalists, republicans and anyone else seen as an enemy of Unionism was renewed in the new Orange Six-County state of ‘Northern Ireland’.

Beginning in July 1920 Unionist mobs, including armed Ulster Volunteer Force (UVF) members, and from November 1920 the Ulster Special Constabulary, had expelled an estimated 10,000 workers from their jobs. They drove hundreds of Catholics from their homes and businesses. Between July 1920 and July 1922 nearly 500 people were killed in Belfast alone. 60% of the dead were Catholics, though they made up just 30% of the population.

The 'Northern Ireland' Parliament met for the first time on 7 June 1921, but even with a large Unionist majority, and Sinn Féin and the Nationalist Party abstaining, the Unionist MPs were not satisfied. Unionist MP William Grant said they would “take steps to expel Sinn Féin from the Six Counties”. The day after the inaugural meeting of the Parliament renewed attacks on Catholics took place. In County Down, two Catholic men were murdered in their home by the Special Constabulary. During the rest of June there were killings of six Catholics in Belfast by the Specials, a number of Catholics and Protestants were killed during rioting and some 150 Catholics were driven from their homes.

The pogrom was renewed within weeks of the signing of the Anglo-Irish Treaty in London in December 1921. After the narrow Dáil vote for the Treaty the Provisional Government of the Free State was established and on its behalf Michael Collins met Unionist Prime Minister of ‘Northern Ireland’ James Craig. They signed a pact which was published on 21 January 1921. 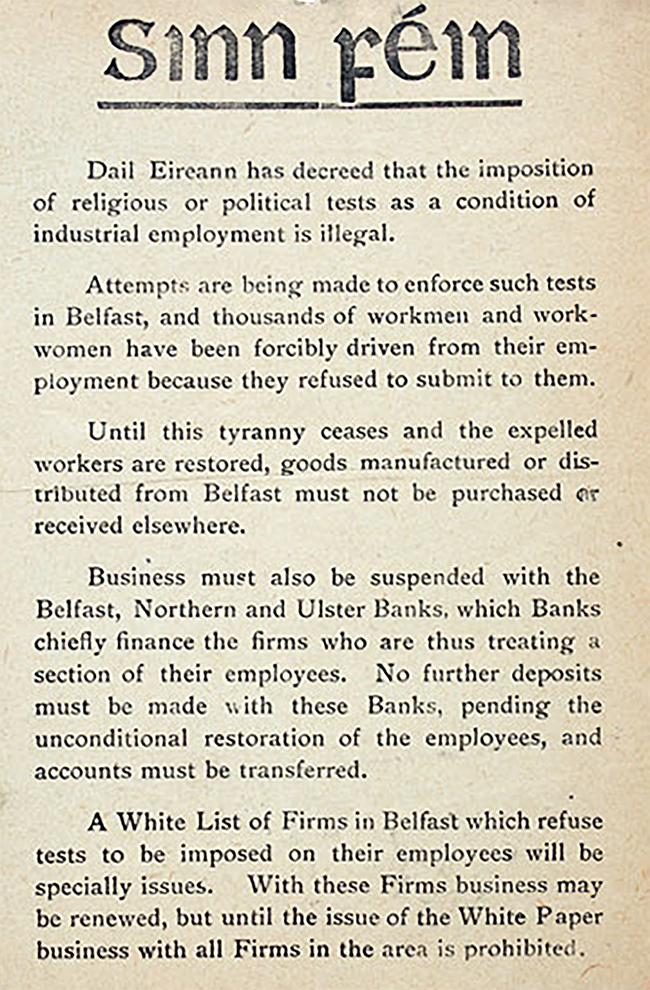 The ‘Collins-Craig Pact’ called off the Belfast Boycott which had been introduced by the Dáil to pressurise the Unionists to stop the pogrom. In return Craig undertook to facilitate the return to their workplaces of expelled Catholic workers. It was a false promise from Craig. The opposite happened and attacks on Catholics intensified, provoking inevitable retaliation. 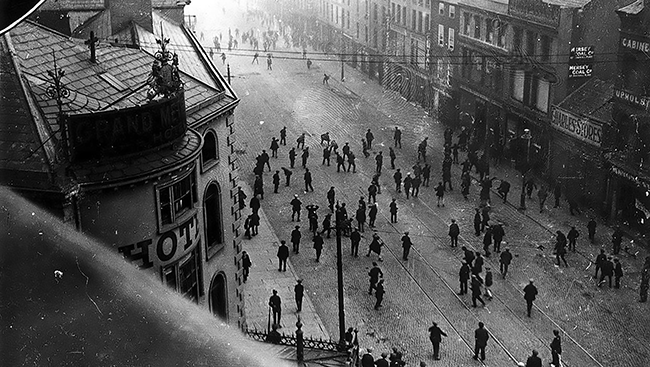 The worst single atrocity of the month was the bombing of children and young people in Weaver Street, Belfast. Two armed loyalists approached a crowd of children playing in the street and hurled a bomb in their midst, followed by a burst of gunfire. Two children were killed outright by the explosion, two more died later from their injuries, as did two adult women. Others were badly wounded. Witnesses said they saw the bombers speaking to uniformed police - B Specials or regular RIC - before the bomb was thrown.

In a mealy-mouthed condemnation of the killings, Craig referred to Weaver Street as “a Sinn Féin area”, enough to justify the attack in the eyes of the loyalists whom Craig himself had previously fired up to sectarian fury.

Despite the intervention of the IRA in defence of the beleaguered nationalist population, there were burnings, shootings and looting on a large scale throughout February. As the pogroms intensified, thousands of refugees streamed south to Dublin while over 1,000 crossed to Glasgow.

At the end of February, in two acts which made the nationalist population feel even more isolated, Craig ordered the blocking of all minor roads across the border while the main roads were patrolled by the A and B Specials. He then appointed Field Marshal Henry Wilson, a fierce enemy of Irish nationalism, as adviser to the new northern regime. It was a sign of things to come - the pogrom was far from over.

‘Facts and Figures of the Belfast Pogrom’
https://issuu.com/jjconeill/docs/factsandfigures

‘Why don’t we remember the Weaver Street massacre in Belfast’ by Cormac Moore, Irish Times, 13 February 2022.