Have you forgotten Bloody Sunday? 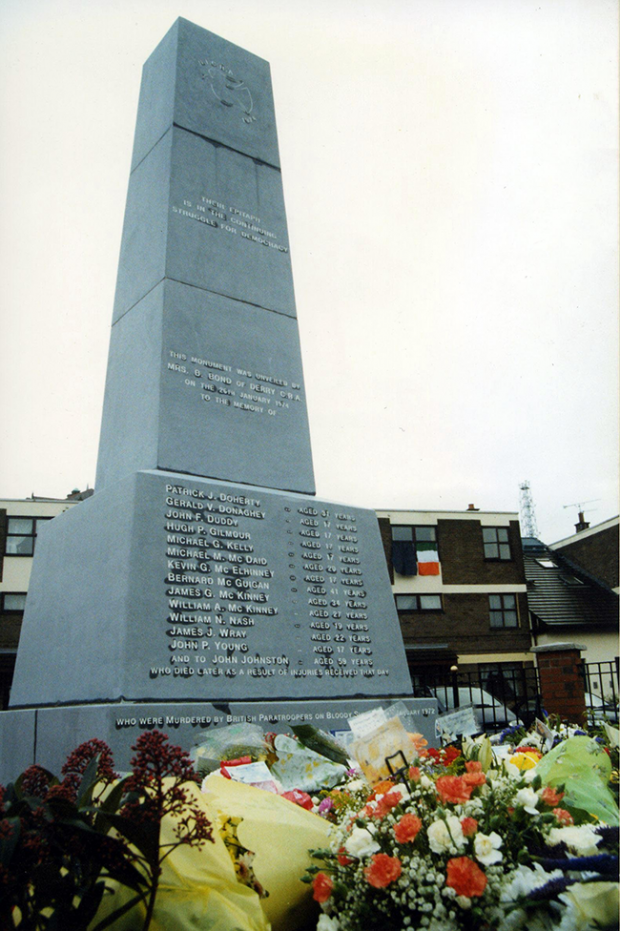 • Bloody Sunday was a shoot-to-kill operation, a massacre, planned and executed with cold-blooded intent

THE ROAD to Bloody Sunday began 20 years ago, October 5th 1968, when 500 civil rights demonstrators marching along Duke Street, in Derry, were baton-charged, and beaten off the streets, by the sectarian RUC. In 1968, the only answer the Stormont regime could give to the raising of the banner of civil rights by the nationalist people of the Six Counties was naked repression. By January 30th 1972, the only thing that had changed was the length to which the unionists and their British masters were prepared to go in order to intimidate nationalist protesters from the streets. In the interim CS gas, water cannon, rubber bullets, even internment without trial and martial law had failed.

As the father of one of the Bloody Sunday victims, Jim Wray, puts it: “The British planned at cabinet level to put our people off the streets, to shoot them if necessary. They were prepared to take that chance, they took that chance, and they gave us Bloody Sunday.”

The march in Derry on January 30th was one of nine marches organised in that month by the Civil Rights Association and Northern Resistance Movement to protest against internment (introduced in August 1971). At the same time, a blanket ban had been imposed on street demonstrations by the Stormont regime, making all civil rights marches illegal. When a group of protesters marched along Magilligan beach on January 22nd to the Internment Camp there, they were savagely batoned by British troops. It was a foretaste of what was to come if the nationalist people still chose to defy British rule.

This they planned to do on Sunday, January 30th, by marching in their thousands from the Bishops field in the Creggan Estate to the Guildhall in Derry city centre. In the days after the attack on the Magilligan protesters, the Derry CRA released a defiant statement saying:

“Just as the violence used by the RUC in the march on Duke Street strengthened the determination of the people to use their rights peacefully on the streets, so this latest act of violence by the authorities strengthens the will of the people of Derry to march in peaceful protest on Sunday next.” 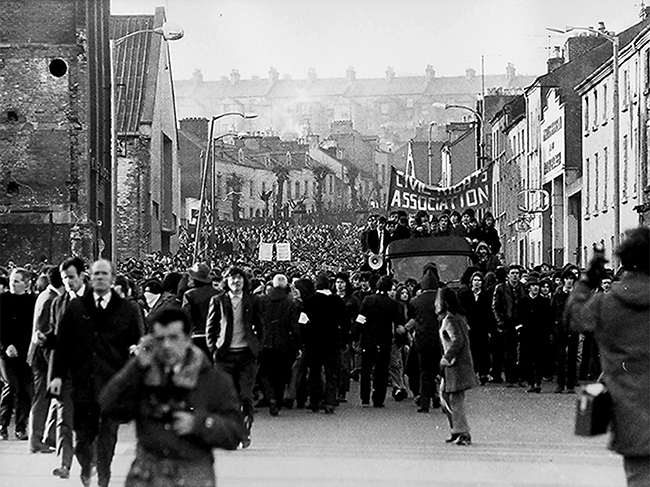 A crowd of around 10,000 left the Bishops field that day, swelling to twice that figure by the time it had covered the 3 mile route to the Bogside. The day was sunny, but cold. There was no sense of impending doom. Indeed, as the ‘Guardian’ correspondent. Simon Winchester, noted, “the mood seemed almost ebullient, with mothers wheeling prams, children weaving here and there, laughing, joking, playing pranks on the. television men and generally adding to an air of a Derry carnival. “

The first hint that this mood was to be cruelly shattered came at William Street, where the advance of the crowd was blocked by a British army barricade. As the crowds turned backwards to reconvene the proposed rally at Free Derry Corner (where Bernadette Devlin and the socialist peer Fenner Brockway were to speak), CS gas, water cannon and rubber bullets were unleashed by soldiers from the 1st Battalion Parachute Regiment. Minutes later, at approximately 4.17pm, just as Bernadette Devlin was about to speak, a hail of bullets came whizzing along Rossville Street without warning, towards the large crowd standing at the barricade outside Rossville Flats.

Without realising what was happening, people dived to the ground for cover stunned and panic stricken. Others ran to the shelter of the stairwells of the Rossville Flats. Those caught in the open at the barricade along Rossville Street were cut down by the deadly accuracy of the Paratroopers fire. 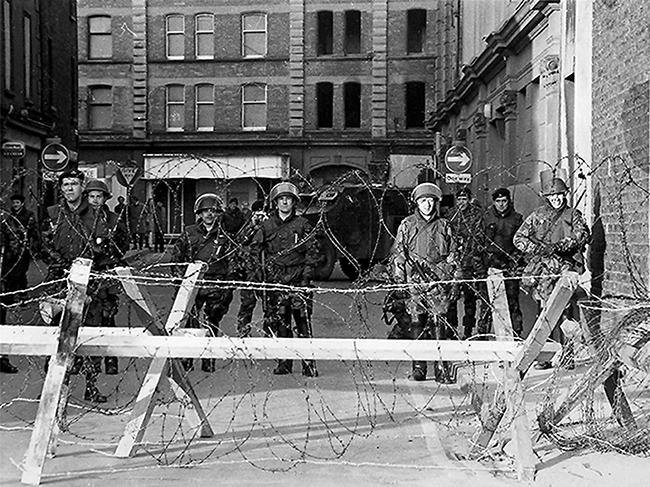 Within seconds, with Saracens sweeping into the courtyard of the flats and soldiers (from the Royal Anglian Regiment) raking the Bogside with bullets from positions on the Derry walls, the entire area was turned into a killing ground. For 20 minutes the firing continued with momentary lulls, Anyone who moved was mercilessly picked off by British snipers. White handkerchiefs were ignored and fire was concentrated on anyone attempting to go to the aid of the injured. To move at all was to invite almost certain death.

Of the 13 who died during those 20 minutes (another victim, John Johnston, was to die six months later from his wounds) James Wray, Gerald McKinney, Gerard Donaghy and William McKinney were murdered at Glenfada Park, where they ran to escape the hail of bullets down Rossville Street. Their escape route was cut off by other paratroopers firing down from the corner of Frederick Street.

Wray was wounded twice and lay, unable to move, in the open, as others tried to reach him. His father remembers:

“One man saw him move and knew my lad was only injured. So he made an attempt to get out to him, and as he approached the anny opened fire. His body was lying there as a trap and anybody who went to save him was going to be shot. Minutes later, as Jim looked up, they shot him, from a distance of nine foot, in his back as he lay in the gutter.”

As others continued to flee, Gerald McKinney stood holding his hands above his head when a soldier approached him and shot him at point blank range in the chest. Kevin McElhinney was on his hands and knees. Paddy Doherty had gone out to pick up one of the wounded when he himself became a target. The same with 17 -year-old Michael Kelly and 41-year-old Bernard McGuigan. Michael Kelly’s father recalled in the Derry Journal of Febru ay 1st 1972. 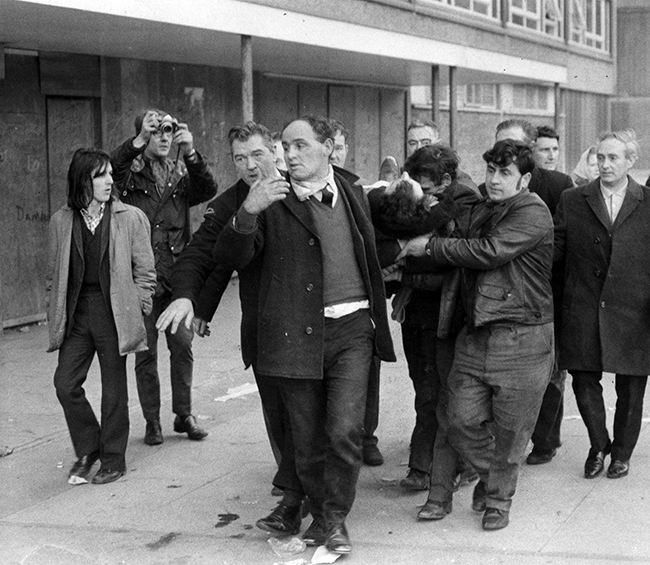 • Paddy Doherty, one of the thirteen shot dead on Bloody Sunday, Derry, Jan 30, 1972, being carried away from Rossville Flats.

“My young fellow saw a man of about 50 years getting hit, and he ran to see what he could do for him. As he ran towards him, he was shot in the stomach. It was his first time at a march in his life.”

Bernard McGuigan held up a white handkerchief to walk out to save Paddy Doherty when he was shot in the base of the skull. When 19-year-old William Nash was shot at the barricade along Rossville Street, his father Alex went to his aid. Alex Nash was shot twice in the chest whilst bending over his wounded son, shouting at the soldiers to stop. Not far away, 17-year-old John Young was dragging himself, wounded, in the shelter of the barricade towards the door of the Rossville Flats with people screaming from the windows “come on lad, come on, you’re nearly there.” But John Young never made it.

Bloody Sunday shook nationalist Ireland to the core. When the news of the mass murder broke, a tidal wave of anger and revulsion swept all of Ireland. The British authorities responded swiftly with a major international propaganda offensive through the media and the Widgery Tribunal whitewash. No paratrooper was ever brought to trial for the murders. In fact, their commander that day was decorated the following year by the British monarch. There were to be no official apologies, no media outpourings of grief and outrage, no national appeals for sympathy for the innocent victims of Bloody Sunday, only contempt. As Simon Winchester wrote: “thanks to the propaganda merchants, and half a dozen lazy hacks, Bloody Sunday became a closed book with the Irish fully to blame.” 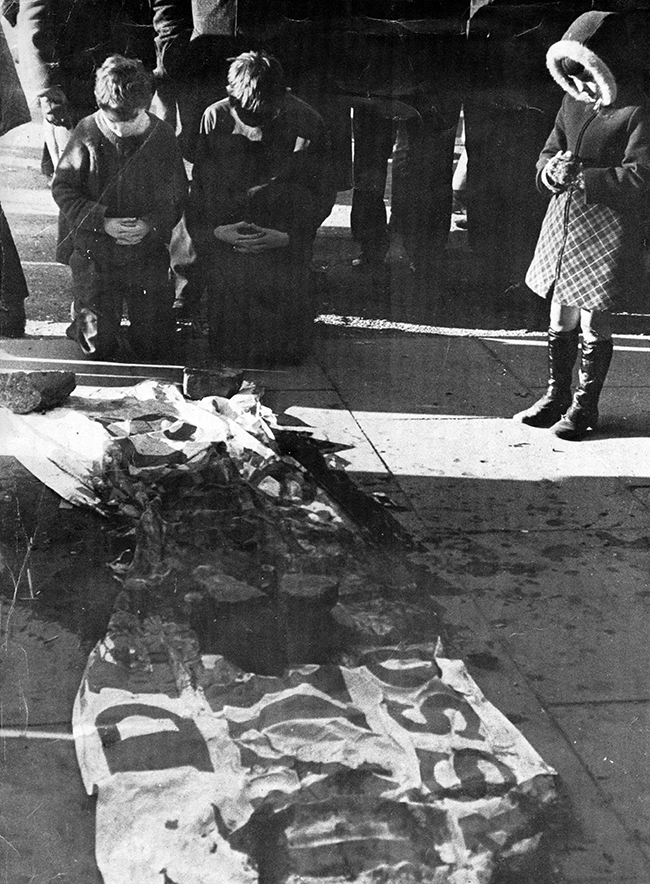 Yet, despite the neat PR job the British establishment have done covering up the facts about Bloody Sunday, they have never been able to shake the conviction of the thousands of survivors of that day that Bloody Sunday was a shoot-to-kill operation, a massacre, planned and executed with cold-blooded intent. As the solitary stone monument in the Bogside. attests, six of the Bloody Sunday victims were 17 years of age. The British were shooting to kill Irish children.

Few could have known that the journey which began in Derry’s Duke Street on October 5th 1968 was to end with a blood-soaked civil rights banner lying in a Bogside gutter. Yet, twenty years on from Duke Street, the risen nationalist people are still marching through more shoot-to-kill executions, and judicial white washes and crown force cover-ups and they are still carrying their banners. 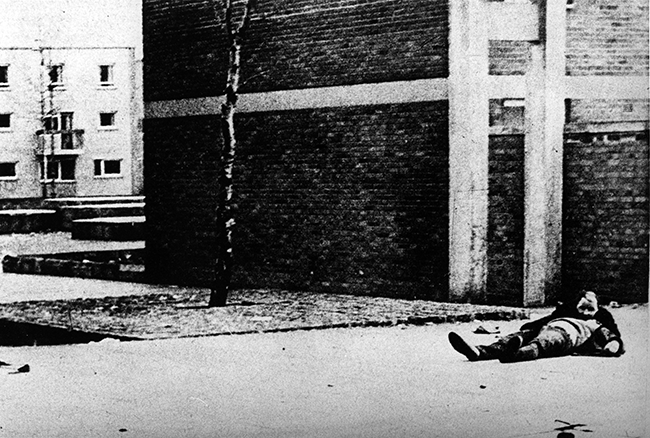