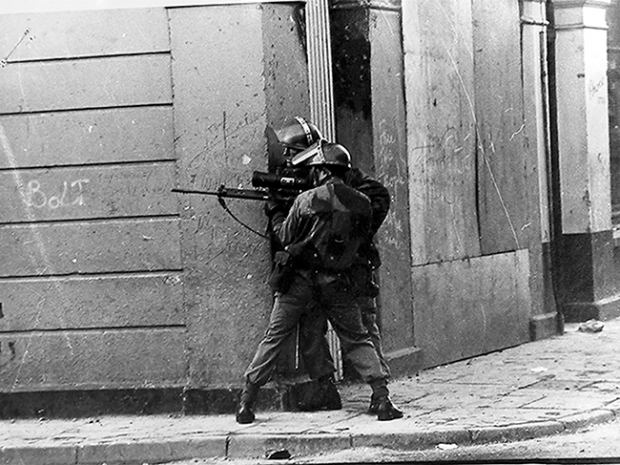 Below is an article from An Phoblacht/Republican News in January 1983, where Pat Deeney interviews Peggy Deery, one of the wounded who survived Bloody Sunday. Peggy died in 1988. Injuries received on Bloody Sunday seriously impacted on her health for the rest of her life.

In 1987 her son Paddy Deery was killed along with Eddie McSheffrey in a premature explosion. The funeral of the IRA volunteers was disrupted by the massive security presence of the RUC and British Army. An Phoblacht/Republican News reported at the time how ‘More than 40 British Army and RUC armoured vehicles entered the Bogside in a cordon around the funeral as a helicopter overhead shone its searchlight on the funeral cortege’. 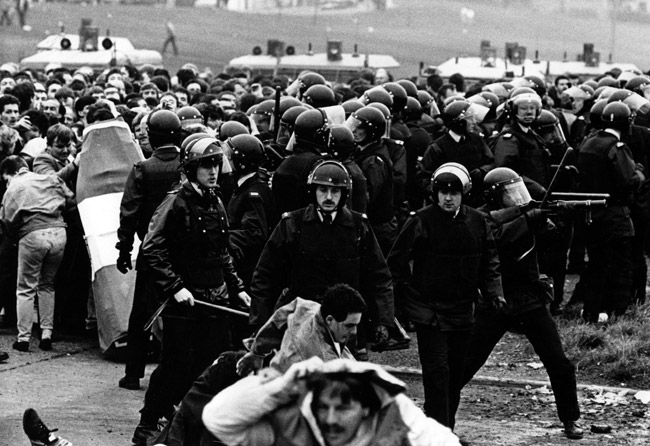 •  The funerals of IRA volunteers Paddy Deery and Eddie McSheffrey, mourners and relatives were attacked and many were seriously injured requiring hospital treatment

This weekend, the murder of 14 people in Derry, on Sunday January 30th 1972 is commemorated as usual by a march which retraces the route of the civil rights march of that day 11 years ago.

As well as the 14 murdered by British Paratroopers, another 12 people received serious gunshot wounds and survived. An Phoblacht/Republican News reporter Pat Deeney has been talking to one of those survivors, Peggy Deery, who recalls her experience of Bloody Sunday.

“I’ll never forget his face. I can’t forget his face.” Eleven years on, Peggy Deery, one of the survivors of Derry’s Bloody Sunday, still remembers the Paratrooper who deliberately shot her from a range of less than ten feet.

After the initial outburst of firing, Peggy and her friends had run in panic through the Rossville Flats car park and into Chamberlain Street. There she had seen a soldier lift his rifle and point it at her. She threw herself against a man named Leo Deehan shouting: “Get down, he’s trying to kill us!” when she felt a terrific blow on her leg.

As she lay on the ground, unaware that she had been shot, she was trampled on by the panic-stricken crowd. “I could hear someone calling, ‘That woman’s been shot,’ and I remember Michael Kelly and mother man crawling towards me and dragging me into a house in Chamberlain, Street.” Michael Kelly was himself to be murdered less than ten minutes later.

She recalls lying on a sofa, blood pouring from her wound when the Paras burst into the house, abused the people there, and roughly checked that it was indeed a woman they had shot, before leaving.

A local chemist applied a tourniquet to the wound and after half an hour an ambulance came. Peggy and another wounded marcher, Micky Bridge, were rushed to Altnagelvin Hospital where both were anointed by Fr Carolyn, a Creggan priest. Peggy was to be again anointed later that Sunday night. 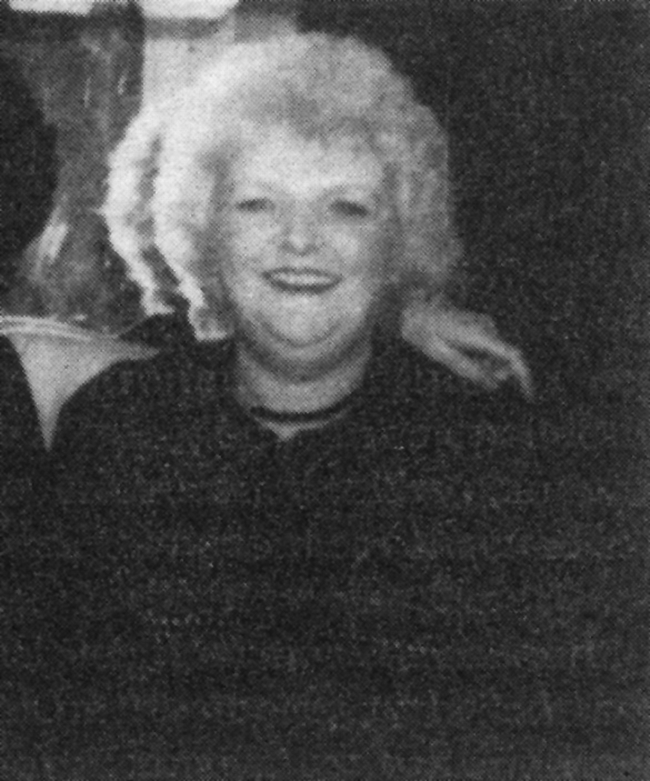 “From when I was in casualty, I still remember vividly the streams of blood and can still see the nurses and matrons wiping it away with mops” Peggy’s left thigh lad been pierced by the bullet and whole thigh muscle was destroyed, severing the sciatic nerve which means that to this day Peggy has no feeling in her leg from the knee down. She received over 100 stitches, in a skin-graft operation to repair her shattered leg.

Peggy was given an immediate blood transfusion. Unfortunately, she was given the wrong blood type which resulted in kidney failure and jaundice. She was taken to Belfast City Hospital the next day and placed in the Renal Unit and put on a kidney machine for five weeks.

The British army had offered to rush Peggy to Belfast in a helicopter but she refused, believing that they planned to throw her out because she could point out the soldier who had shot her.

Peggy Deery spent her next seven months in hospital and the next two years in a wheelchair. During this whole period she had to attend Altnagelvin Hospital daily for bandage changes.

The wounds inflicted on Peggy by a British Para totally changed her life. A widowed mother of a large family she was forced to depend on her children to run the house.

She has a metal calliper fitted to her damaged leg as a support but even with that support she can stand for less than five minutes before the pain sets in.

“I now exist on a daily diet of valium, blood pressure tablets and sleeping tablets but I still have nightmares of that day and still see the Brits ‘closing in’ on me.

Since Bloody Sunday, Peggy Deery’s home in Creggan Heights has been raided by the British army on 128 occasions.

Six months after Bloody Sunday her young son, Patrick aged 14, lost an eye after being struck by a rubber bullet.

Like the other survivors of Bloody Sunday, Peggy Deery has become just another half-forgotten statistic in the long list of atrocities committed by the crown forces in Ireland. But Peggy does not forget nor does her family who have been harassed and intimidated by the British army for the past 11 years.