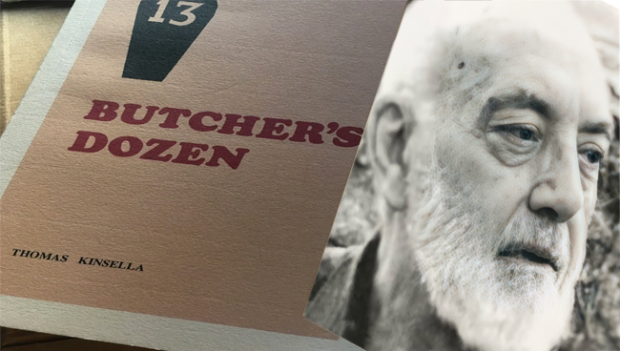 Eminent Irish poet Thomas Kinsella died in December 2021, just before the 50th anniversary of Bloody Sunday, the Widgery Tribunal and the poem he wrote and published swiftly in response.

The full title is ‘Butcher’s Dozen - a lesson for the octave of Widgery’. Originally published in pamphlet form by the Peppercanister Press in early 1972, it has been republished in a 50th anniversary edition by Carcanet Poetry. In a note on the poem Kinsella says he wrote it in response to “Lord Widgery’s cold putting aside of truth, the nth in a historic series of expedient falsehoods”. It was published within a week of Widgery’s report.

Kinsella writes of the rejection of his work by English readers and the loss of friendships as a result of the poem’s publication. While he was widely praised as one of Ireland’s foremost poets, Kinsella was never part of the academic, literary or political establishment. He did not share the ‘revisionist’ position that predominated within that establishment. 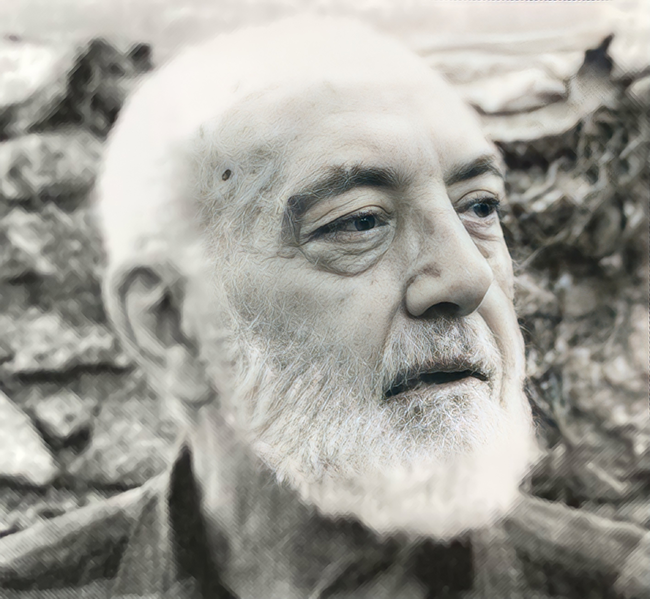 In ‘The Dual Tradition - an Essay on Poetry and Politics in Ireland’ (1995) Kinsella writes of “the transformation of the Unionist minority in the North” by partition “into a permanent supremacist majority which proceeded, in the name of democracy, to discriminate methodically against the newly created nationalist minority. This was in fact the purpose behind partition, establishing Northern Ireland in its present self-destructive state.”

The poem reflects the profound and widespread anger, not just at the British Army killings but at the widely broadcast lies of the British government, summed up in, but by no means confined to the Widgery Report. It is written with all the power of a truly great poet. 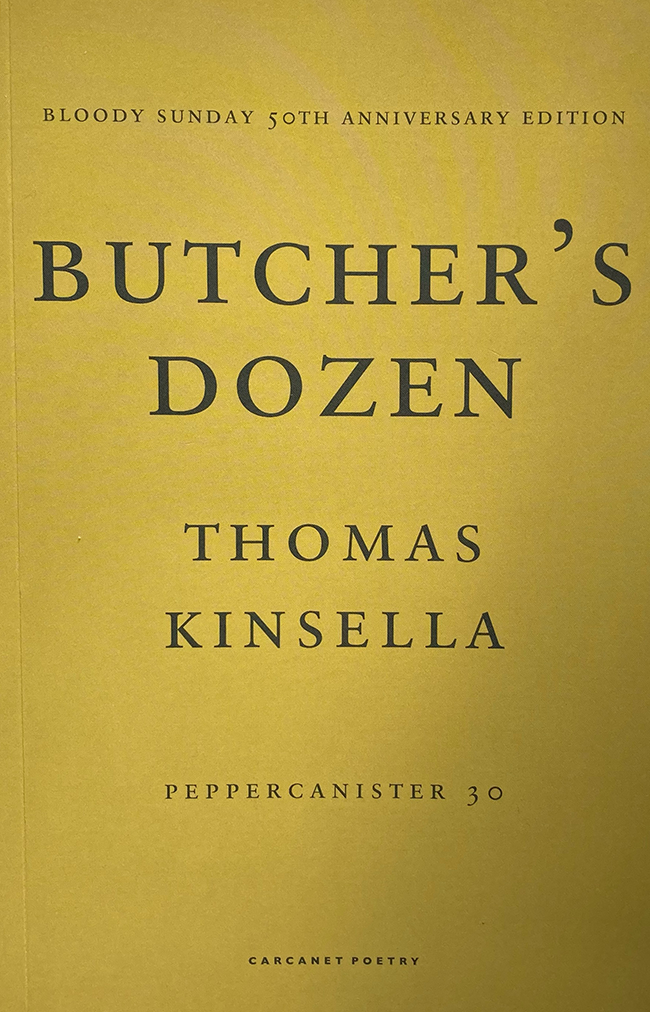 I went with Anger at my heel

Through Bogside of the bitter zeal

Of cold and drizzle and decay.

A month had passed. Yet there remained

A murder smell that stung and stained.

On flats and alleys-over all-

It hung; on battered roof and wall,

On wreck and rubbish scattered thick,

On sullen steps and pitted brick.

And when I came where thirteen died

It shrivelled up my heart. I sighed

And looked about that brutal place

Of rage and terror and disgrace.

Then my moistened lips grew dry.

I had heard an answering sigh!

There in a ghostly pool of blood

A crumpled phantom hugged the mud:

“Once there lived a hooligan.

A pig came up, and away he ran.

Here lies one in blood and bones,

Who lost his life for throwing stones.”

From dirt and stone. Each upturned face

Stared unseeing from its place:

“Behind this barrier, blighters three,

We scrambled back and made to flee.

The guns cried Stop, and here lie we.”

Then from left and right they came,

Holding their wounds. They chose their ground,

Ghost by ghost, without a sound,

And one stepped forward, soiled and white:

“A bomber I. I travelled light

- Four pounds of nails and gelignite

About my person, hid so well

They seemed to vanish where I fell.

When the bullet stopped my breath

A doctor sought the cause of death.

He upped my shirt, undid my fly,

Twice he moved my limbs awry,

And noticed nothing. By and by

A soldier, with his sharper eye,

Stuffed in my coat and trouser pockets.

Yes, they must be strict with us,

Even in death so treacherous!”

He faded, and another said:

“We three met close when we were dead.

Into an armoured car they piled us

Where our mingled blood defiled us,

Certain, if not dead before,

To suffocate upon the floor.

Careful bullets in the back

And so three dangerous lives are done

- Judged, condemned and shamed in one.”

That spectre faded in his turn.

A harsher stirred, and spoke in scorn:

“The shame is theirs, in word and deed,

Who prate of justice, practise greed,

And act in ignorant fury - then,

Send to their Courts for the Most High

To tell us did we really die!

Does it need recourse to law

To tell ten thousand what they saw?

Law that lets them, caught red-handed,

Halt the game and leave it stranded,

Summon up a sworn inquiry

And dump their conscience in the diary.

During which hiatus, should

The thing is rapidly arranged:

Where’s the law that can’t be changed?

The news is out. The troops were kind.

Impartial justice has to find

We’d be alive and well today

If we had let them have their way.

Yet England, even as you lie,

You give the facts that you deny.

Spread the lie with all your power

Friend and stranger, bride and brother,

All not blinded by your smoke,

Photographers who caught your stroke,

The priests that blessed our bodies, spoke

And wagged our blood in the world’s face.

The truth will out, to your disgrace.”

He flushed and faded. Pale and grim,

A joking spectre followed him:

“Take a bunch of stunted shoots,

A tangle of transplanted roots,

In a bed of blood and bone,

Tongue of serpent, gut of hog

Spiced with spleen of underdog.

Stir in, with oaths of loyalty,

And heat, to make a proper botch,

In a bouillon of bitter Scotch.

Last, the choice ingredient: you.

Now, to crown your Irish stew,

Boil it over, make a mess.

A most imperial success!”

He capered weakly, racked with pain,

His dead hair plastered in the rain;

The group was silent once again.

It seemed the moment to explain

Keep us in this dire distress.

We must forget, and look ahead,

Nurse the living, not the dead.

My words died out. A phantom said:

“Here lies one who breathed his last

Firmly reminded of the past.

A trooper did it, on one knee,

In tones of brute authority.”

That harsher spirit, who before

Had flushed with anger, spoke once more:

This lesson in our hearts we keep:

The milder forms of violence,

Earn nothing but polite neglect.

England, the way to your respect

Is via murderous force, it seems;

You push us to your own extremes.

You condescend to hear us speak

Only when we slap your cheek.

And yet we lack the last technique:

We rap for order with a gun,

The issues simplify to one

- Then your Democracy insists

You mustn’t talk with terrorists!

White and yellow, black and blue,

Have learnt their history from you:

Divide and ruin, muddle through,

Not principled, but politic.

- In strength, perfidious; weak, a trick

We speak in wounds. Behold this mess.

My curse upon your politesse.”

Another ghost stood forth, and wet

Dead lips that had not spoken yet:

“My curse on the cunning and the bland,

On gentlemen who loot a land

They do not care to understand;

Who keep the natives on their paws

With ready lash and rotten laws;

Then if the beasts erupt in rage

Give them a slightly larger cage

And, in scorn and fear combined,

Turn them against their own kind.

The game runs out of room at last,

A people rises from its past,

The going gets unduly tough

The time has come to yield your place

With condescending show of grace

- An Empire-builder handing on.

We reap the ruin when you’ve gone,

All your errors heaped behind you:

Promises that do not bind you,

He stopped and coughed to clear it out,

And finished, with his eyes a-glow:

You gorged - and it was time to go.

But for the rubbish of your feast,

The slops and scraps that fell to earth

And sprang to arms in dragon birth.

Apprentices of fife and drum,

Of dismal streets and empty yards,

Drilled at the codeword ‘True Religion’

For scribbled magic-at their call,

Straight from the nearest music-hall,

In one more battle by the Boyne!

Who could love them? God above...”

“Yet pity is akin to love,”

The thirteenth corpse beside him said,

Smiling in its bloody head,

“And though there’s reason for alarm

In dourness and a lack of charm

Their cursed plight calls out for patience.

They, even they, with other nations

Have a place, if we can find it.

Love our changeling! Guard and mind it.

Doomed from birth, a cursed heir,

Theirs is the hardest lot to bear,

Yet not impossible, I swear,

If England would but clear the air

And brood at home on her disgrace

- Everything to its own place.

Face their walls of dole and fear

And be of reasonable cheer.

Father’s foulness with the spirit,

Purge the filth and do not stir it.

Let them out! At least let in

A breath or two of oxygen,

So they may settle down for good

And mix themselves in the common blood.

We are what we are, and that

Is mongrel pure. What nation’s not

Where any stranger hung his hat

And seized a lover where she sat?”

He ceased and faded. Zephyr blew

And all the others faded too.

Along the fatal barricade.

The gentle rainfall drifting down

Could not refresh, only distil

In silent grief from hill to hill. 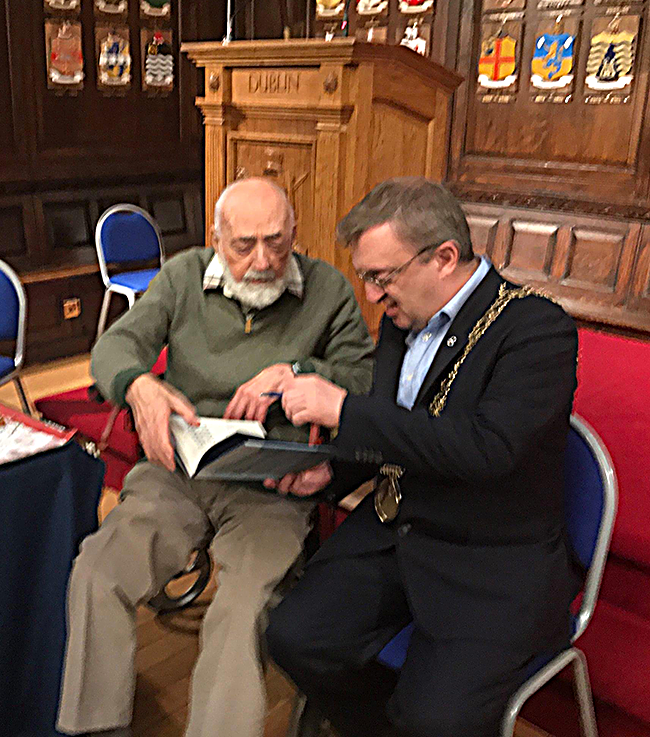