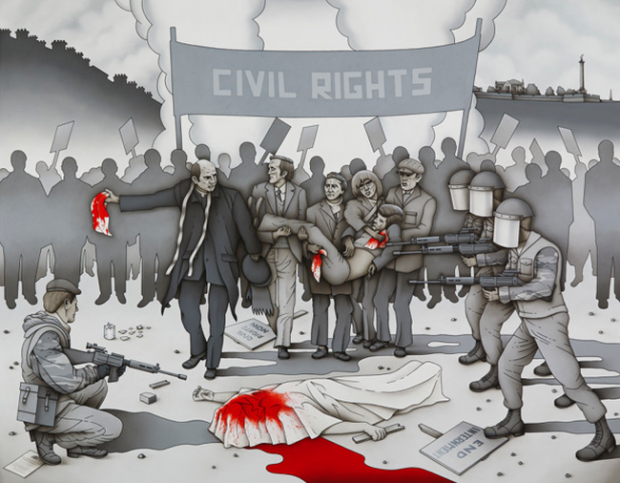 When Robert Ballagh, the outstanding contemporary Irish painter, found a growing need to make a statement on the 50th anniversary of Bloody Sunday, he felt more and more drawn to paintings that had impacted on him in the past. The most compelling one in relation to the Derry massacre was Goya’s The Third of May, a painting depicting the execution of Spanish people on Spanish soil by the invading French army. Ballagh’s painting is entitled The Thirtieth of January. The parallels in the situation are clear: On Bloody Sunday, Irish people were executed on Irish soil, by British soldiers.

The title of Robert Ballagh’s painting, The Thirtieth of January, makes in itself clear the connection to Goya’s The Third of May. But of course the visual language is compelling. While in Goya’s picture, the outline of Madrid sets the location of the executions in 1808, in Ballagh’s it is the Derry skyline, its walls, St Columb’s cathedral, the Presbyterian church and indeed with Walker’s Monument still in place. (This was blown up in 1973.) Where there is a hillside behind the Spanish victims on the left of Goya’s picture, in Ballagh’s, the eye moves upwards from the Bogside to working-class terraces.

In both paintings the focus is on the victims, the people against whom and on whose territory the atrocity is being committed. They are the figures whose faces we see; the soldiers are faceless. While Goya chooses the moment of execution of the central rebel (others already lie dead beside him), Ballagh depicts a scene directly after the shooting has started. He shows us two victims, one dying, the other dead.

Looking at the picture, we are faced with a group of distressed people running towards us, a press image that went around the world. The priest Fr Daly is holding up a white blood stained handkerchief, trying to shield this group carrying the first victim of the massacre, the mortally wounded Jackie Duddy, out of range.

These people are clearly recognisable. They also hold white bloody handkerchiefs, underlining a peaceful protest crushed in blood. In Goya’s painting, too, a monk is by the side of the rebel, offering support, along with others. In addition to this, a priest, Fr Hugh Mullan, had been shot dead in the Ballymurphy Massacre. So there are many layers of associations in this figure.

Centred in the foreground is another victim, covered in white bloodstained cloth, echoing the handkerchiefs. The stark white, associated with peace, innocence and martyrdom, reminds viewers of the brilliant white shirt of the man about to be executed in Goya’s painting. He is flanked on the right by a group of faceless soldiers, their weapons by the hip indicating indiscriminate shooting, not taking aim. 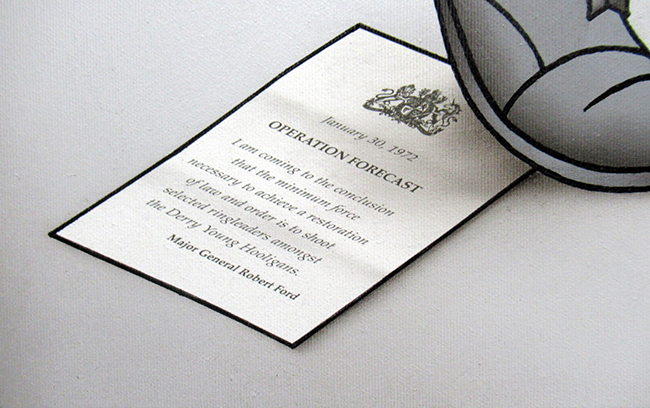 Another soldier on the left in a kneeling position closer to the body suggests “Soldier F” who knelt to shoot dead Barney McGuigan, as he waved a white handkerchief high above his head, trying to go to the aid of the dying Patrick Doherty.“Soldier F” was responsible for a number of the cold blooded killings, and the only soldier to be accused of murder, only to be cleared later. Perhaps because of this identity, we see his face in part.

Ballagh makes clear that the marchers were unarmed. We see two placards on the ground reading “Civil Rights Now” and “End Internment”. A Civil Rights banner occupies the upper centre of the picture, like a title.

The painting not only references Goya, but also Picasso’s Guernica, itself a picture about foreign invaders murdering a native population and inspired by Goya. Like Picasso, Ballagh decided on a monochrome painting. The covered dead man’s hand in the centre foreground still holds the broken end of the “End Internment” placard in his right hand, in much the same way as the slain man in Picasso’s painting grasps the broken sword. The left hand also echoes Picasso’s in its reach towards the left corner of the painting, as well as in its gesture. Picasso and Ballagh’s black-and-white execution evokes newspaper images; in Ballagh’s case most of the press photographs and footage from the event were in black and white. The only colour are the blood red splashes on white.  The smoke behind the silhouetted demonstrators in the background suggests the use of tear gas seen in so many photographs of police attacks on demonstrators. 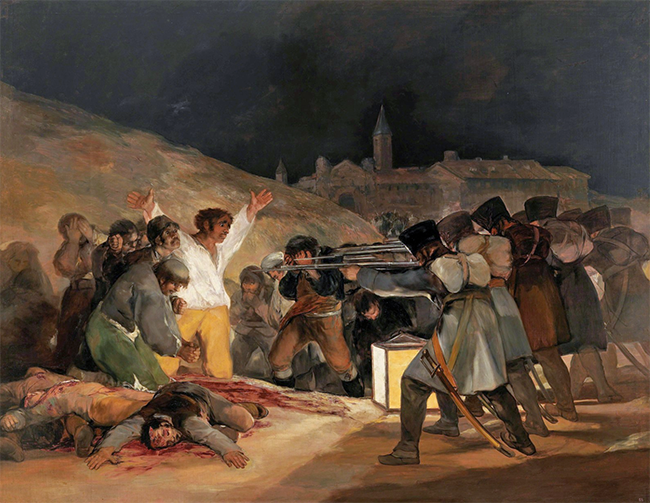 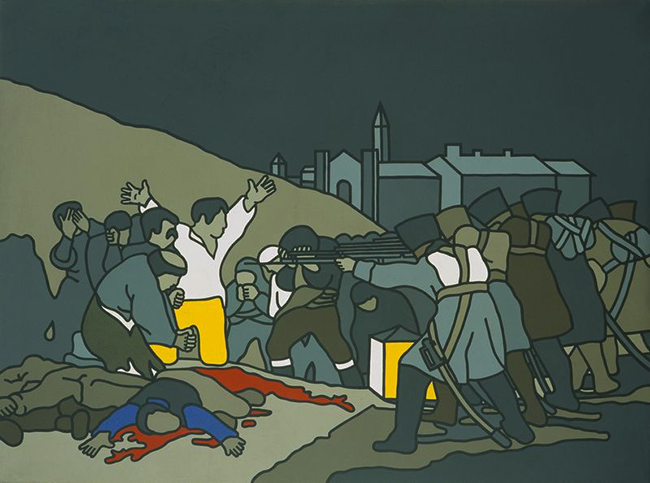 • The Third of May after Goya by Robert Ballagh

In the left corner, under the foot of the kneeling soldier, we see a sheet of paper with the Royal Coat of Arms and writing on it. They are the words of Major General Robert Ford. The title is the massacre’s military code name, Operation Forecast, and is dated January 30, 1972. The text reads: “I am coming to the conclusion that the minimum force necessary to achieve a restoration of law and order is to shoot selected ringleaders amongst the Derry Young Hooligans.”

Ballagh leaves no doubt but that the killings were ordered at the highest level. In this respect, too, the painting goes further than any Inquiry has ever done. Michael Jackson, a senior officer in command, was later promoted to Commander-in-Chief of the British Land Forces.

Art history and political history are connected. Art doesn’t exist outside of time, and there is a tradition in art that does not shrink away from taking sides. Neither does this diminish the artist, think of Mikis Theodorakis, Pablo Neruda, and of course Goya’s The Third of May is one such work that has echoed through time. This painting inspired Picasso’s 1937 Guernica and the 1951 Massacre in Korea; it has also been an enduring influence on Robert Ballagh’s work. The power of this work, through Ballagh’s interpretation, was picked up by a community art group in Derry who recently asked his permission to reproduce his The Third of May after Goya on a wall in Glenfada Park, one of the murder sites on Bloody Sunday. They did this because they could see the direct connection between the terror and the anger of their own experience and that depicted in The Third of May. In both pictures, the viewer is a direct witness to the events and, standing alongside the artist in the midst of this slaughter, feels involved.

Beside it, up until recently, the group had displayed their copy of Picasso’s Guernica. When artists take the side of the people against oppression, they resonate and are understood worldwide because the condition of the victims of wars for profit, power, and control is global. Bloody Sunday is a part of world history of colonialism and occupation and people’s resistance, and Robert Ballagh’s painting says just this and demonstrates the necessity of art.