Dáil Éireann divides on the Treaty

Remembering the Past - Centenary of crucial vote 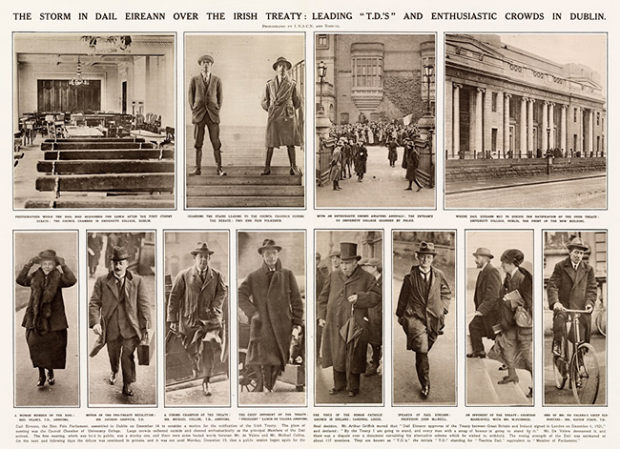 One hundred years ago this week Dáil Éireann voted on the Treaty and divided just as the Cabinet had already divided and as the IRA was shortly to do also. It was a division that would lead eventually to armed conflict, but not for another six months, with many other factors contributing to the outbreak of the war.

To debate the ‘Articles of Agreement’ signed in London on 6 December 1921, Dáil Éireann assembled in University College Dublin, Earlsfort Terrace, on 14 December, adjourned for Christmas on 22 December and resumed on 3 January, with the debate continuing until 7 January 1922 when the vote was taken. The room where the debate took place was later renamed the Kevin Barry Room and is now part of the National Concert Hall. 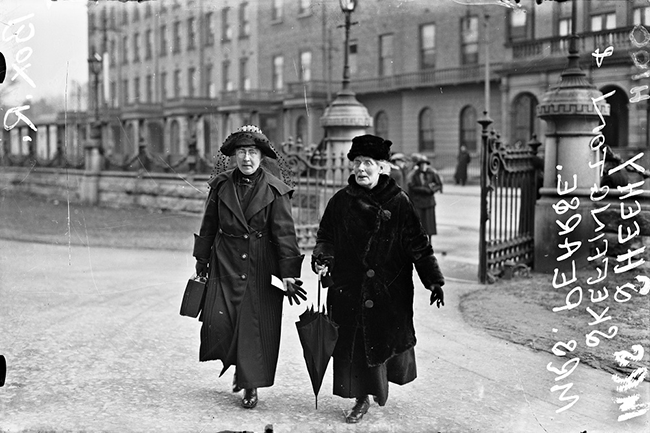 • Hanna Sheehy-Skeffington and Margaret Pearse arriving at the debate

The debate was lengthy and varied and while there was some notable personal bitterness expressed, it was generally conducted in a comradely manner. All six women TDs – Constance Markievicz, Kathleen Clarke, Margaret Pearse, Kate O’Callaghan, Máire MacSwiney and Ada English - opposed the Treaty. All stressed that the Irish Republic had been established, they were pledged to uphold it and the Treaty was totally inconsistent with maintaining the existing Republic. Reflecting her socialist beliefs and the influence of James Connolly, Markievicz went further:

“My idea is the Workers’ Republic for which Connolly died. And I say that that is one of the things that England wishes to prevent. She would sooner give us Home Rule than a democratic Republic. It is the capitalists’ interests in England and Ireland that are pushing this Treaty to block the march of the working people in England and Ireland.”

The debate had begun with some challenges to the delegation sent to London for not carrying out their instructions which were to refer any proposed treaty or treaties back to the Cabinet before signing. This did not become the dominant theme that it might have as, given the division in the Cabinet, the anti-Treaty members could not prevent the substantive issue of the Treaty being debated and voted on in the Dáil. Another key issue where the anti-Treaty side was at a disadvantage was war or peace. While Michael Collins claimed there was no ‘personal’ threat from the British side, the pro-Treaty argument depended greatly on the view that if the Dáil rejected the Treaty then war would follow. “Neither honour nor principle can make you plunge your people into war again”, argued Kevin O’Higgins.

The belief that war was the only alternative to the Treaty was strengthened by the speech of George Gavan Duffly, one of the Treaty signatories. He described the threat from Lloyd George and said that while “it might have been bluff” every one of those who heard it believed it “beyond all reasonable doubt”. Duffy asserted that “the alternative to our signing that particular Treaty was immediate war”. This shows how Lloyd George had divided and intimidated the Irish delegation. Duffy did not argue for the Treaty on its alleged merits but on the basis that rejection meant war. Griffith and Collins did not use this argument but relied on what they portrayed as the great merits and opportunity of the Treaty. 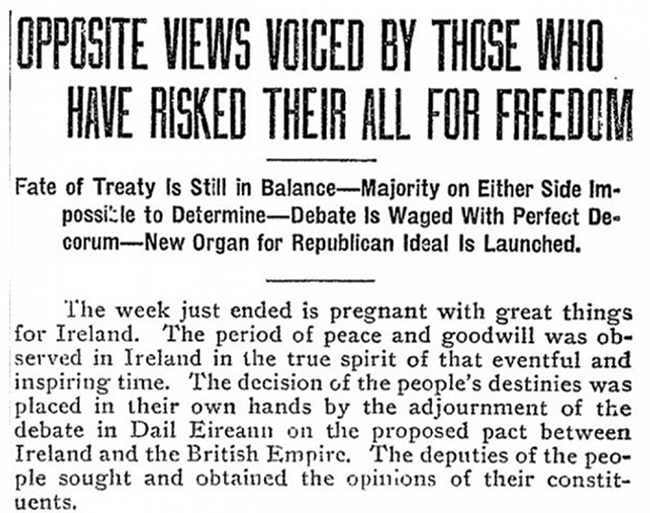 The anti-Treaty side failed to counter the ‘peace or war’ argument effectively by challenging the assumption that the British would have found it politically possible to unleash immediate war on 6 December or would do so if the Dáil rejected the Treaty. Many anti-Treaty speakers stood on principle and asserted that they would be prepared to face war if they had to, thus somewhat playing into the hands of the pro-Treaty side on the question of war or peace.

A further huge disadvantage for the anti-Treaty side was the overwhelmingly pro-Treaty position taken by the national and local newspapers. This was seen with great force during the Christmas recess when the papers pushed for Dáil acceptance of the Treaty. Catholic bishops also began to make pro-Treaty sermons. Many people later expressed the view that had the vote been taken before Christmas the Treaty would have been rejected.

‘External association’ with the British Commonwealth was the formula that Éamon de Valera had devised as the acceptable outcome of negotiations and during the debate he revived this idea as the alternative to the Treaty. However his ‘Document Number 2’ became embroiled in procedural arguments and in a dispute over the release of an earlier draft to the press by Arthur Griffith. Also many Republicans had little time for this approach and preferred the straight principled argument for the Republic. Thus the anti-Treaty side appeared to many to lack cohesion and consistency. 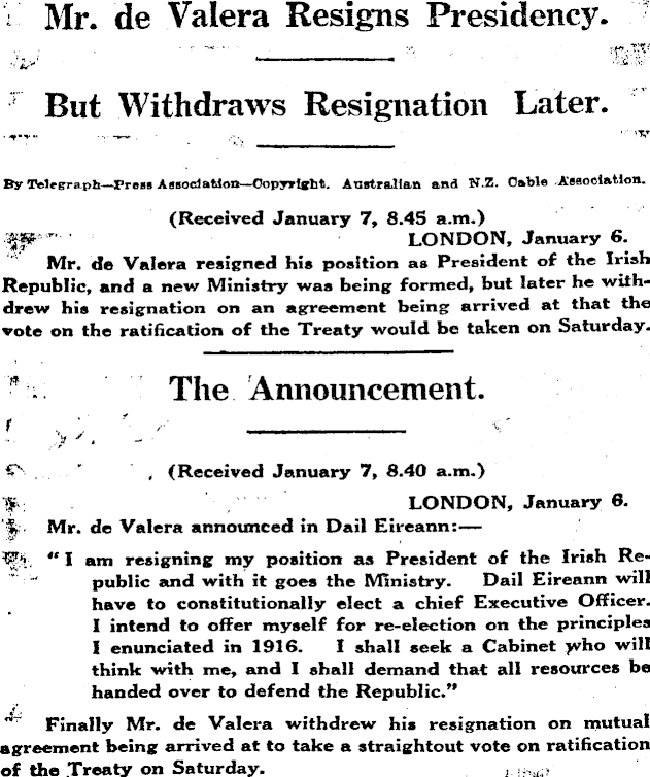 On 6 January, the eve of the vote, de Valera offered his resignation as President saying that he could not continue with a divided Cabinet. This was a gamble by de Valera who hoped that by making his presidency an issue he could swing more TDs against the Treaty. He hoped the Dáil would reject the Treaty and re-elect him as President. But on 7 January when the vote was taken by roll-call 64 voted for the Treaty and 57 against. By a margin of just seven votes the Dáil had taken a momentous decision that still echoes down the decades. 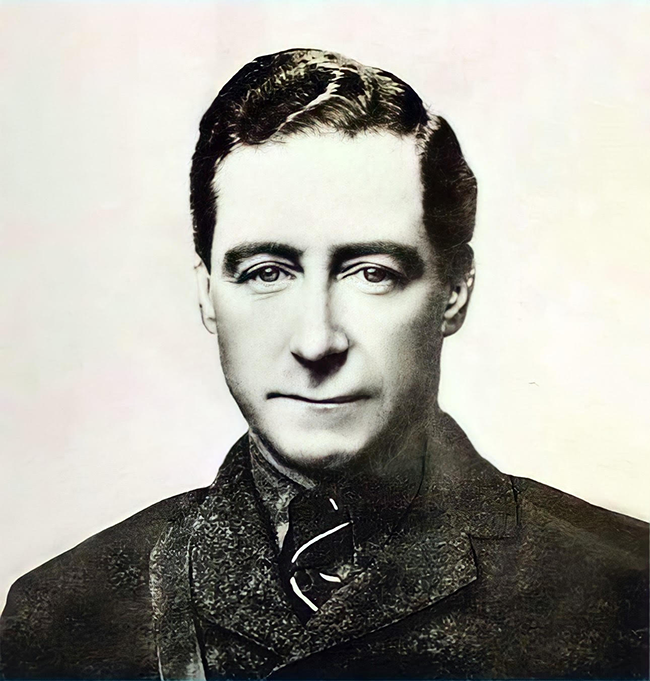 One of the final speeches made in the debate was that of Cathal Brugha who summed up the feeling of many committed Republicans:

“Why, if instead of being so strong, our last cartridge had been fired, our last shilling had been spent, and our last man were lying on the ground and his enemies howling round him and their bayonets raised, ready to plunge them into his body, that man should say—true to the traditions handed down—if they said to him: ‘Now, will you come into our Empire?’—he should say, and he would say: ‘No! I will not.’ That is the spirit that has lasted all through the centuries, and you people in favour of the Treaty know that the British Government and the British Empire will have gone down before that spirit dies out in Ireland.”