The future is bright…Ireland’s future – by Declan Kearney 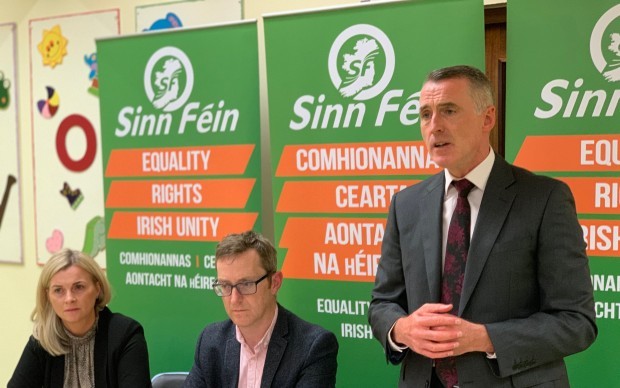 "The prospect of a united Ireland is now fixed on the political horizon. That doesn’t mean that it’s inevitable. A majority of the people in Ireland will have to vote by concurrent unity referenda under the provisions of the Good Friday Agreement to bring that about. But there is no denying future constitutional change is now a mainstream issue."

Tadhg Hickey, the outstanding comedian from Cork posted a tweet last weekend which caught my eye:

“Yesterday I visited the future: A packed cross-community gala in Belfast with some of the best in business; politics; economics; sport; media; and religion, breaking bread and working together in a post-partition Ireland. I tell you: Ireland’s future is bright.”

He was making a figurative reference to a gala lunch we coincidentally both attended at the Crowne Plaza Hotel in Belfast. It was organised by ‘Ireland’s Future’ - an independent, non-party political, civic movement, which exists to promote discussion on a new, rights-based, constitutional vision for Ireland.

The event was addressed by its Secretary, Niall Murphy, the renowned human rights lawyer, and Reverend Karen Sethuraman; but the key note speech was from David McWilliams, one of Ireland’s foremost economic thinkers and commentators.

The diversity of those in the audience was extraordinary. The table at which I was seated was a case in point. It included, among others; McWilliams himself; Fine Gael TD, Neale Richmond; Fianna Fáil Senate Chairperson, Mark Daly; Alliance Party councillor David Honeyford; my party colleague, Conor Keenan; and, ‘Ireland’s Future’ board members, the historian and journalist, Brian Feeney, and leading human rights academic, Professor Colin Harvey. 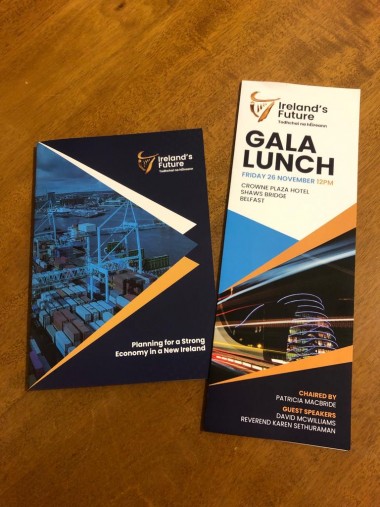 Elsewhere in the room there were some of the most prominent business people in the north; representatives from Ireland’s biggest law firms; Border Communities against Brexit campaigners; an architect of our peace process; Gaelic Athletic Association (GAA) stars from Antrim, Tyrone, and beyond; doctors, teachers, community, and cultural activists; other members of Fianna Fáil, Sinn Féin, Fine Gael, and SDLP; and, the Sam Maguire Cup even made an appearance!

The attendance reflected the extent to which the political realignment caused by Brexit, and probably the pandemic, and most certainly by the Protocol impasse, has moved the discussion about constitutional change and Irish unity centre stage.

The prospect of a united Ireland is now fixed on the political horizon.

That doesn’t mean that it’s inevitable. A majority of the people in Ireland will have to vote by concurrent unity referenda under the provisions of the Good Friday Agreement to bring that about.

But there is no denying future constitutional change is now a mainstream issue.

Hence the significance of those who made up the audience at this ‘Ireland’s Future’ event.

While many attending are actively involved with the debate on Irish unity in different walks of life, others have not embraced that position; and remain to be persuaded. However, they sense that change is happening, and want to learn, and know more what direction it will take.

Attitudes are adjusting in the north. Fundamental demographic change is happening. The unionist political majority, which was the lynchpin of Ireland’s partition is gone. Partition has run out of road.

Some from within wider civic unionism are starting to think outside the contours of the northern state, and about how their aspirations for a society based on modern, liberal, democratic, pluralist values can be secured.

They quite reasonably associate Irish unity as a route back into the EU.

David McWilliams put it well in his comments in an interview with the Irish News at the Belfast gathering. He said;

“It makes no sense for an island this small to be divided.” 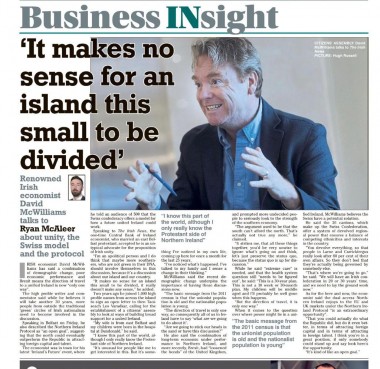 McWilliams is one of a growing cross section of Irish society who are not primarily motivated by republican or nationalist politics, but instead recognise the potential which an orderly transition to Irish unity can unlock for the development of a new society and economy; which is pluralist, multi cultural, modern, and outward looking.

Constitutional change and new national, democratic arrangements will have a new modernising influence in Irish society; arguably on a par, if not greater, than the social transformation brought about by the divorce, marriage equality and ‘Repeal the 8th’ referenda.

The conversation on constitutional change is indeed building momentum; but it needs to be expanded: To become even more inclusive: To be populated with new ideas and concepts: To be informed and considered.

Most importantly, our discussion about the future shape of the new Ireland needs to be popularised right within every sector of Irish society.

In recent times some of the most important pillars of Irish civic society both north and south, have begun to turn their attention towards, and reflect upon these issues.

The business community and labour movement have commenced vital policy discussions about the future. Eminent academics and think tanks have begun research and modelling on constitutional and economic options. The need to prepare for reunification is being openly discussed within the GAA itself.

As an organisation ‘Ireland’s Future’ has emerged from the last five years of political and economic turmoil on the island. It is evidence of an organic momentum which has already moved beyond partition towards new opportunities.

It is playing a seminal role in developing ideas and policies; but its strength derives from being able to reach across the party political, community, religious, and cultural spectrum - to facilitate discussion; and enable gatherings like the Crowne Plaza lunch to happen.

That is as it should be.

No one has a monopoly on the Irish unity debate. The new Ireland must be for everyone. 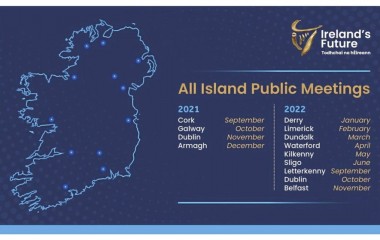 And the group has already commenced a programme of all-island public meetings which are also being live streamed and will run throughout next year.

These are exciting times for Irish society. 2022 will be a very interesting year.

So, Tadhg Hickey is right; ‘Ireland’s future is indeed bright’.