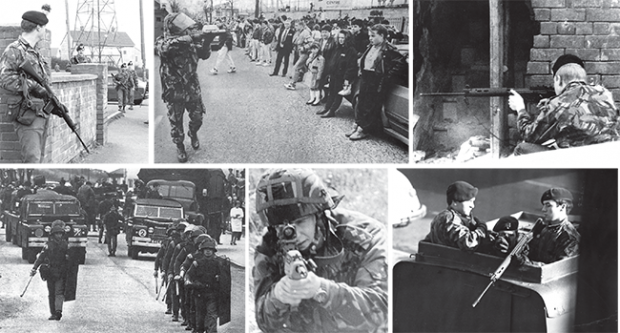 When Brandon Lewis, the British Secretary of State, took to his feet in the British Parliament on 14 July to outline the Tory government’s legislative package that would close down investigations into ‘conflict era’ killings, he knew his proposals would be rejected out of hand. He knew that his government would face the anger of all the North’s political parties and provoke the ire of groups representing the families of victims and survivors from across the political spectrum.

It seems that the British government is also calculating that they can sideline the concerns of the Dublin government, as these plans will supersede the Stormont House Agreement of which Dublin is a joint guarantor, and the United States administration of Joe Biden, which has kept a clear watching brief on political developments in Ireland.

It is an indication that the Johnson government is driven by the same ‘Britannia Waives the Rules’ worldview that drove the Brexit campaign!

It is now clear that there was only one objective for this Tory government; ditching the Stormont House Agreement to close down any avenue of investigation into its politico-military campaign in Ireland and that providing an amnesty for its soldiers who killed Irish civilians is a secondary consideration.

That the British government would elevate cynicism and crassness to the level it has should come as no surprise to anyone, let alone anyone in Ireland. And if anyone in Ireland is surprised at the extent of the legislation outlined by the North’s Secretary of State Brandon Lewis on 14 July, then they have misread the signs. 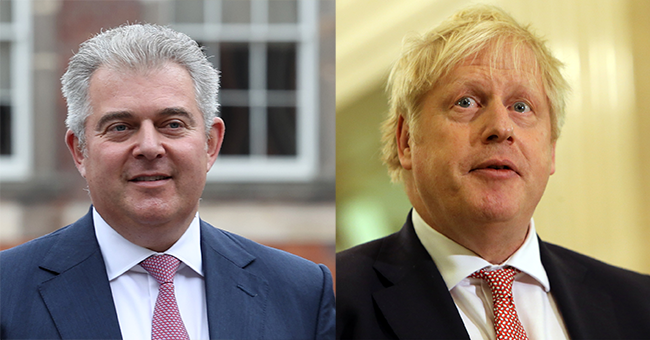 These signs were there on Tuesday May 11 when Justice Siobhan Keegan, sitting as coroner in the Ballymurphy Massacre inquest cases, ruled that all ten people killed by British paratroopers were unarmed, posed no threat and were unjustifiably killed. That same day, the British Queen’s speech opening parliament stated that a “statute of limitations” for killings which occurred during the conflict in the North would be enacted.

At the time, Mark Thompson of Relatives for Justice reacted to the proposed legislation and the timing of its announcement saying, “When you think Britain can’t go any lower, it does”.

While Lewis’s speech was flagged up with speculation that a statute of limitations barring prosecutions for offences committed prior to the 1998 Good Friday Agreement would be at the heart of British government legislation, the wide ranging nature of the legal framework outlined to an almost empty chamber caught most observers on the hop.

The suggested legislation according to Lewis “will apply equally to all troubles-related incidents”. And although he is making no difference between the combatant groups, viewing the IRA no differently from their opposition British forces including Britain’s proxies in the loyalist death squads, it is nonetheless geared towards ensuring that British soldiers active in Ireland during Operation Banner would not face prosecutions if they were involved in killings.

However, Brandon Lewis is also advocating an end to inquests into conflict related deaths, stopping police ombudsman investigations as well as any civil actions stemming from inquest findings. This clearly proves that this British government is intent on closing down any inquiry that shines a light on the actions of the British state and its forces during the conflict.

Since the 2013 conviction, and subsequent release, of British Marine Sergeant Alexander Blackman for summarily executing a wounded Taliban fighter in Afghanistan, successive British governments have been in a quandary over how to legislate to provide an amnesty for those who killed in the illegal Iraq and Afghan wars.

The Overseas Operations Bill, whose long title is ‘A Bill to Make provision about legal proceedings and consideration of derogation from the European Convention on Human Rights in connection with operations of the armed forces outside the British Islands’, was the part solution to that particular conundrum.

It follows a long line of British derogation from European human rights legislation and provides an amnesty for those who, like Blackman, executed a wounded man who could have been taken prisoner.

However, this law couldn’t be used to protect British soldiers responsible for killing and other offences in the North due to the British claim of sovereignty over the Six Counties which sees the British present the Northern conflict as “an internal law and order” problem, ignoring its colonial roots and centuries old occupation.

The underpinning legal problem for successive British governments was the application of Article 2 compliant inquests, conducted under European Court of Human Rights strictures, which found Britain in breach of human rights standards, found many killings such as the Ballymurphy killings unjustified thus leading to a number of British soldiers facing prosecution for murder.

One such case is that of former Life Guards soldier Dennis Hutchings, who is on trial for the attempted murder of 27-year-old Tyrone man John Pat Cunningham.

The Hutchings case has become the lighting rod that has attracted the British political and military establishment, the right wing press, and of course unionist militarists in a campaign to exonerate the actions of the British soldiers in the North.

The term ‘vexatious prosecution’ has crept into the discourse around legacy as the defenders of British Army killers, in one of the great ironies of the conflict, attack the legal system that protected them for years.

That protection was evident when the Paratrooper Regiment killers A and C of 'Official IRA' Volunteer Joe McCann were acquitted of his killing in May this year.

The anger felt at the collapse of the McCann case was compounded just weeks ago when Soldier F, the only Para charged over the Bloody Sunday killings, and Soldier B, charged with shooting dead 15-year-old Daniel Hegarty also in Derry, had the cases against them dropped.

The latest announcement by British Secretary of State Lewis will facilitate blocking inquests and Ombudsman investigations and also prevent families from taking civil actions against the British state. It will ensure that those in the British establishment who were ultimately responsible for the actions of Britain’s forces and who controlled the unionist death squads will not face scrutiny.

Mark Thompson of Relatives for Justice (RFJ) in an angry response to Johnston and Lewis’ legacy proposals accused the British of the “mother of all cover ups”.

Thompson said, “these unilateral proposals have no political or community support whatsoever. The British government signed the Stormont House Agreement on legacy in 2014, which provided for human rights compliant investigations with full accountability for all sides. From that day and hour, it has attempted to back track and undermine the agreement”. 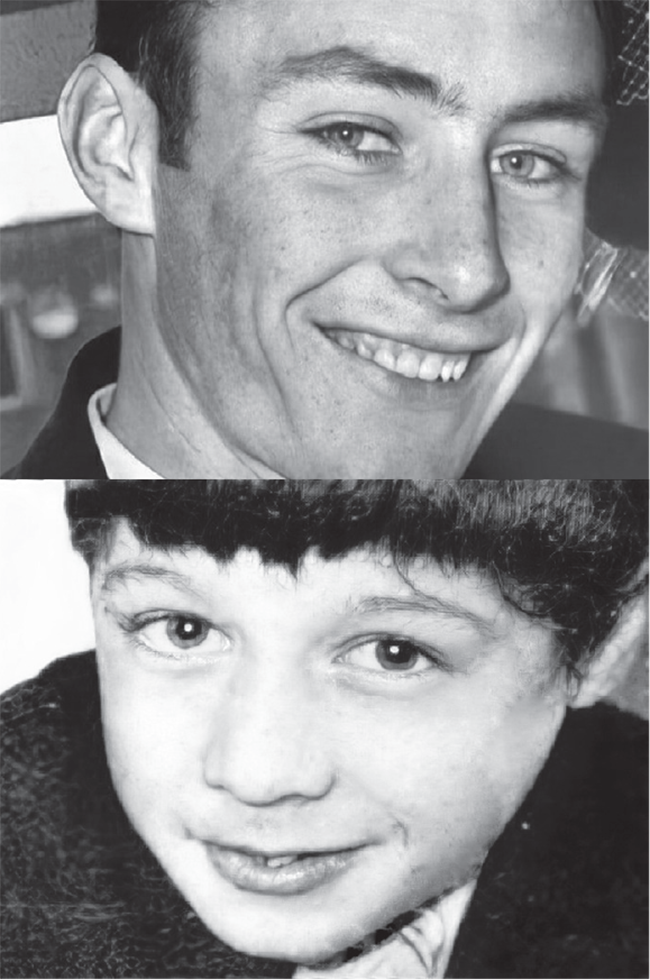 According to the RFJ director, “there are over 450 complaints residing with the Police Ombudsman’s Office which relate to RUC misfeasance in public office and criminal wrongdoing regarding state and non-state killings. There are over 45 inquests waiting to be heard and 40 awaiting progress; these inquests largely involve the state withholding information, even from coroners,” he said.

Thompson added that, “for two decades, a cabal of senior officers in the PSNI, former members of RUC Special Branch, and the Ministry of Defence have been fighting families tooth and nail, and using secret courts and other proceedings to prevent effective investigation, delay investigation, and discredit investigations. Their work has resulted in today’s announcement”.

Echoing Thompson’s remarks, Sinn Féin Joint Head of Government in the North Michelle O’Neill said these “unilateral proposals are a clear breach of the British government’s Stormont House Agreement and their New Decade New Approach commitments ...[and] is opposed by all five main political parties in the north and the Irish government.

“This is about the British government simply protecting their own state forces and the policy makers responsible for shoot to kill, state murder and collusion; facilitating impunity and blocking accountability.

“If the current legacy process is to deliver for victims in a human rights compliant manner, there can be no amnesty or statute of limitation for British state forces or intention to interfere with due legal process in respect of legacy inquests, judicial reviews, civil cases or prosecution cases involving British soldiers already before the courts”. 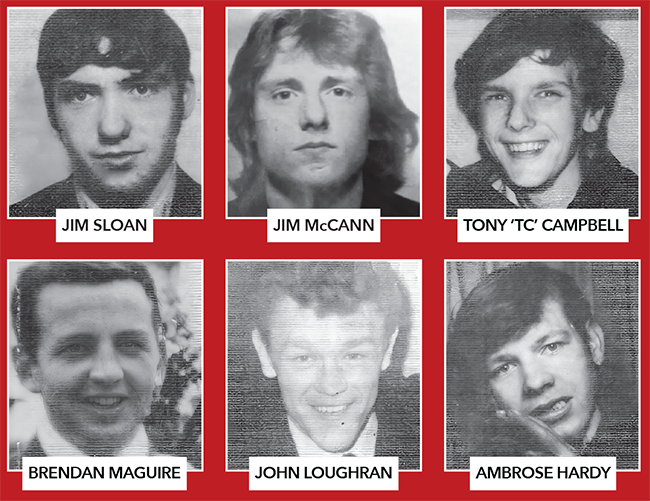 The North’s Attorney General has ordered a fresh inquest in to the killing of six unarmed men in the New Lodge area of North Belfast over 3 and 4 February 1973.

Known as the New Lodge 6, the men were gunned down in a series of shootings that had all the hallmarks of a combined ‘dirty tricks’ operation.

In the initial shooting, around 11pm on Saturday 3 February, IRA Volunteers Jim Sloan and Jim McCann were shot dead from a passing car, most likely by members of the British Army’s undercover Military Reaction Force (MRF), at the junction of the New Lodge and Antrim Roads.

As locals came on to the streets, British Army snipers opened fire from the top of the New Lodge Flats and Duncairn Gardens.

None of the Volunteers who died that night were on active service and were unarmed when killed. As per their modus operandi, the British branded the dead as “gunmen”.

With the news that Attorney General Brenda King has ordered a new inquest comes the hope that the families and survivors of the killing spree will get answers to the many questions about that night, not least that the British Army operation was a planned ambush involving the MRF and those stationed on the high rise flats.

In the 48 years since the killings, locals have maintained that the first shootings, outside Lynch’s bar, were carried by the British Army’s covert MRF unit as a ruse to draw the IRA onto the streets, presenting themselves as targets to British snipers deployed on the flats, who for the first time in the North, would be using newly developed infrared night sights.

Were this scenario to be substantiated in any way, it would expose the tactics of the British at the time in the North using death squads such as the MRF while also proving that the British planned the situation to allow them to ‘battle test’ a new weapon.

In 2017, King’s predecessor as Attorney General John Larkin refused to order a fresh inquest and referred the case to the Director of Public Prosecutions to ask the PSNI to investigate the case, the implication being that AG Larkin believed a ‘criminal’ investigation was warranted.

However, the DPP refused to investigate, resulting in it going back to King’s office who has reopened the case. Significantly, this sets the original inquests aside and means the new hearing will take place under the Article 2 Right to Life compliant rules set out by the European Court of Human Rights.

Essentially this means that the coroner can examine all the circumstances around the killings which could happen under the old regime where only the deceased could be identified and the date, place, and cause of death dealt with.

If the British government’s new legislation is enacted in full, the facts of what happened on the New Lodge Road will forever be buried in a British secret files bunker and the families of those massacred will never see justice as the military planners and their political overlords will remain beyond scrutiny.