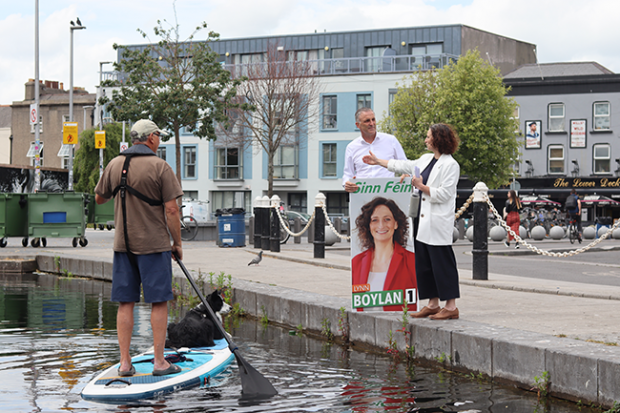 “You can’t miss the house, Jim. There’s a poster of Lynn above the front door”, Sam said.

But, I first had to find the house. It was in Mackin Street which I eventually found via Pearse Street, named after Padraig Pearse who led the 1916 Rising.

It induced historical meanderings. Pearse Street was formerly known as Brunswick Street and it was there, in April 1920, an intense and lengthy gun battle took place between the IRA and the Black and Tans during which several people died.

As I turned into Mackin Street, I could see Mount Street Bridge, the site of another huge battle during Easter Week, between the Volunteers of 1916 and the British Army, during which the British lost heavily.

On this street, there is the Pearse Centre in the former family home of Patrick and Willie, and beside it one of Dublin’s soup kitchens – what an ironic contrast of history.

My reminisces came to a welcome end when I spotted Lynn Boylan’s poster as described by Sam. And he was right, you couldn’t miss the house, with the striking poster of Lynn, former MEP and now Seanadoir, carefully placed for maximum impact on passers-by.

I find that about Sam, when it comes to exactitude and getting details right – especially details about elections.

He has qualities I met in his recently deceased father when we used to meet, when Sam and his brothers were children and his parents, Joe and Edna, were finding their feet in Belfast, a city at war, in the mid ‘70s, following Joe’s deportation from England. 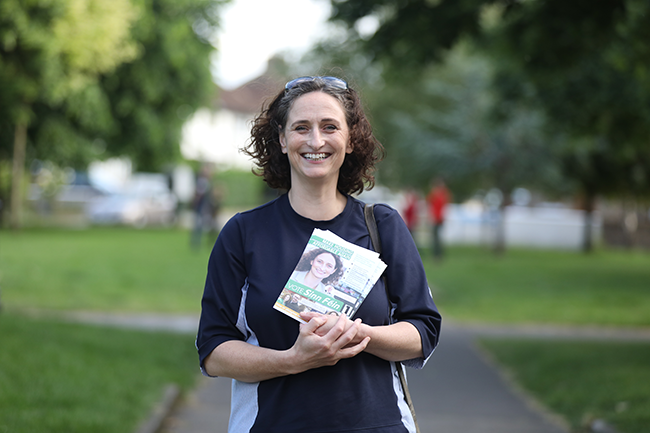 When I see Sam Baker at election time, I relax and I am particularly relaxed if I see him in the company of Peter Lynch.

They are a powerful double-act, who provide outstanding leadership on many fronts, particularly when it comes to anything to do with elections; running the campaign, reading the turnout on polling day, predicting the turnout at close of poll, reading and predicting the result as the ballots fall from the ballot boxes onto the tables at the count. These are not places for the faint-hearted or those of a nervous disposition.

The late Siobhán O'Hanlon had the same calming effect on me. She had a great election brain, which was impressive in action, especially at close of poll, when everyone desperately wanted to know how Gerry Adams or any of the other Sinn Féin elected representatives in West Belfast fared.

On this occasion – polling day in the Dublin Bay by-election – Sam was in the company of much younger, yet formidable operators, on many fronts as well, including the election front; Rachel, formerly of the US, and Lauren from the Lower Falls.

They had, with the approval of the host family, taken over the kitchen and the three of them were huddled around the family’s dinner table, where a computer, not food, was the centre of attention.

From inside the living room, I watched the experts at work as the canvass team leaders brought the immediate mood of the electorate into the make-shift election HQ, to be inserted first into the trios’ brains and then the computers’ brain.

I arrived around 4.30 pm and I could see from the reaction to the steady flow of information from the campaign managers that all was well in the Sinn Féin camp.

I was quickly assigned to a ‘door knocking’ team. My team leader was Aibhilin, from Derry, a university graduate, who is one of Mary Lou’s advisers and a niece of the now veteran (he will be raging at that) Derry/Belfast republican Peadar Whelan, former northern editor of An Phoblacht and ubiquitous photographer of the conflict for decades.

Aibhilin's father Liam and Peadar are brothers and spent years in the H-Blocks on the blanket protest for political status.

For the next few hours, gently and authoritatively the team was guided by Aibhilin from house to house and flat to flat at ground and higher levels.

We had an easy task encouraging people to come out to vote for Lynn. Most of those we canvassed were women of all ages and it was a joy to see the smiles on their faces as they told us ‘voted already’ or ‘on my way to vote’.

The canvass reminded me of the time I spent knocking doors in Tallaght for Mark Ward. The mood on the doors in that election was unreal and like Dublin Bay it was primarily women who were the most responsive and upbeat.

Around 8pm, I drew breath in the front garden of ‘HQ’.  I was suddenly surrounded by other ‘door knockers’. 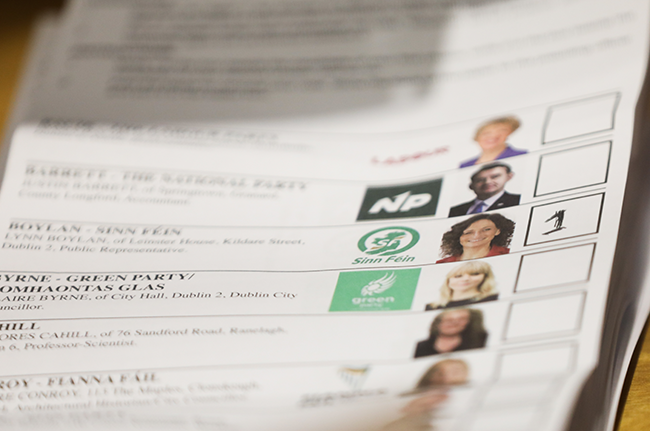 All young, all enthusiastic, and from all parts of Ireland – a section of the sizeable contingent from Ógra Sinn Féin led by Caoimhín McCann, its Cathaoirleach, who were dotted across the constituency.

There was Julietta from Cavan who fulsomely praised former TD Caoimhghín O Caoláin who was always on hand to help her and other young people locally.

There was Pete from Monaghan a young farmer who had finished his day’s work and headed to help Lynn.

There was Joe from Kerry, Conor from Newry, Darragh from Dublin, Eoin from Leitrim – all students at universities; Trinity, UCD, DCU, and Queens.

I was like Bamber Gasgoine of University Challenge as I asked each one what they were studying; economics and applied economics, politics, history, and Spanish.

Darragh told me that young people in Raheny were joining Sinn Féin to help change the local area and became interested in a united Ireland when they realised it was the party’s main objective.

There was Liam Lappin, whom I first met when he was a student and has progressed through the ranks of the party and is now one its experienced leaders. It was an evening for a song, but unfortunately Liam hadn’t brought his guitar.

So, in the absence of musical entertainment, we ‘shot the breeze’, talking about my favourite topic – the economic benefits of a united Ireland. Ably assisted by the economists in the company, topics included; the economic merits of a high-speed train from Belfast to Dublin, the decentralisation of economic planning, and of course by how many votes would Lynn win the seat.

And, when we were all getting too carried away, Caoimhín McCann interjected with a sobering thought – the price of a pint in Dublin, 7 euros. Between the laughs, there was utter disbelief when I told them that for £1 in 1970 you could buy five bottles of beer. And I had.

Just before I paid thanks to the family for the generous use of their home, I had a fascinating conversation about the origins of Covid-19 with the daughter of the house, Nikita, who by profession investigated bacteria but was on secondment to the health service to battle the virus. She was in command of her post and her arguments; too many for this piece.

It was time to go.