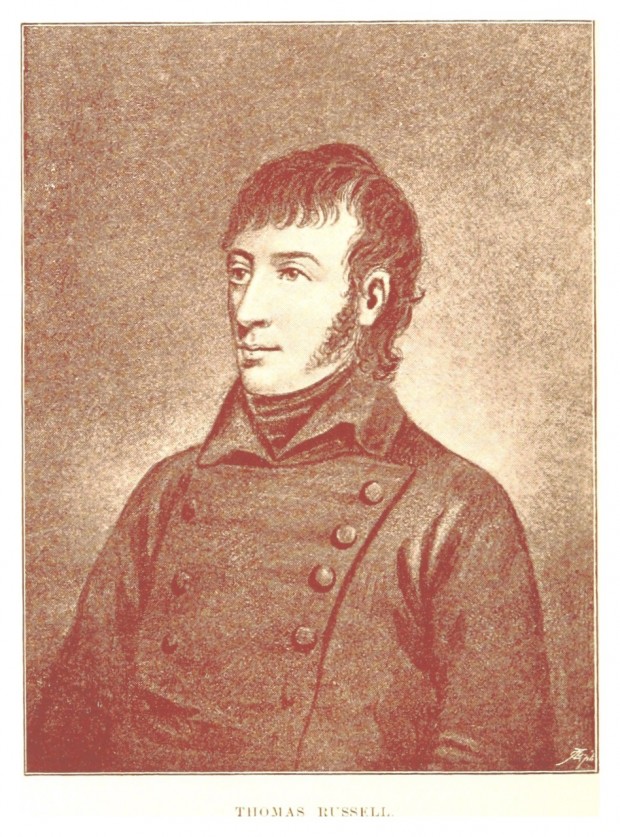 "In every generation since Russell walked defiantly to the scaffold in Downpatrick, the men and women of Down have continued in his footsteps to freedom. So in paying tribute to Russell today, we recognise that he was not merely a great man of his time, but an inspiration for our time now too"

Thomas Russell was a founding leader of the revolutionary society of the United Irishmen. He was executed by British crown forces in Downpatrick Gaol on this day, 21st October 1803.

Born in Co Cork in 1767, at the age of 15 years old Russell joined the British Army and served in India. However he soon returned home disillusioned and angered by the colonial subjugation of the Indian people by the imperialist British forces.

Having abandoned the British Army, Russell would spend the remainder of his life dedicated to the cause of Irish liberty and the emancipation of Irish citizens from the imperialist domination of landlord, merchant and soldier.

There’s no doubt that Russell’s time in India also left an indelible mark on his political perspective as he had been particularly angered by the “unjust and rapacious conduct of British authorities” in their pursuit of native women.

This will also have nurtured Russell’s deep anti-racism and opposition to slavery. Indeed Mary Ann McCracken recalled that Russell refused slave labour produce during his time in Belfast, including the avoidance of confectionary and condiments containing plantation ingredients such as sugar, nutmeg, and cloves.

Russell was also well ahead of his time in arguing that poverty was a crime, the result of barbaric colonial policies in Ireland. For in Russell’s mind the wealth of a nation was not to be measured in the prosperity of the landlords and merchants, but rather in the “ability of the majority to procure a comfortable subsistence with little labour and have something to share with those who are in want.” As early as 1791 Russell was arguing for the creation a society that would actively redistribute wealth as he believed that the “children of the land are only destitute as a result of the great inequality of wealth.”

In 1796 Russell published his ‘Letter to the People of Ireland’, a damning analysis of the state of the country - the corruption and greed of the “parasitic” aristocracy; and the urgent need to foster a union of the “whole family of mankind” in in the interests of “natural justice” and the liberty of Ireland. He built upon his earlier ideas about the redistribution of wealth to include radical proposals on the distribution of property and the creation of trade unions for tradesmen, labourers and cottiers.

Russell also had a keen interest in the reawakening of the Irish language; co-editing the Northern Star’s Irish language magazine Bolg an tSolair. In the preface to the first edition he argued that “seeing that Gaeilge has been banished from the court, the college and the bar; and that many tongues and pens have been employed to cry it down, and to persuade the ignorant that it was harsh and barbarous jargon, and that their ancestors were an ignorant, uncultivated people - it becomes necessary to say something in reply.”

A leading member of the Society’s ‘Northern Executive’ and Commander of the United Irish revolutionary forces in Ulster, Russell became actively involved in the huge effort to recruit volunteers for the inevitable rising. Indeed, his selfless efforts in travelling between townlands to foster a new revolutionary alliance between the mass rural 'Defender’ movement and the United Irishmen was immortalised in Florence Wilson’s ballad ‘The man from god knows where’.

However with word spreading fast of Russell’s efforts he soon became a wanted man with crown forces; and in September 1796 he was captured in Belfast. Held first in Newgate Prison in Dublin, Russell was to miss the 1798 insurrection and refusing to accede to British offers of cooperation, he was sent to Fort George in Scotland where he remained incarcerated until 1802 when he was deported to Hamburg under strict instruction not to return to Ireland.

Russell however had other ideas. He soon made his way to Paris where he reconnected with Robert Emmet, the younger brother of Russell’s United Irish comrade Thomas Addis Emmet. Again with the assistance of French revolutionary officers, they plotted for an insurrection in Ireland.

Russell sailed for Ireland in 1803 and set about reigniting the revolutionary embers of ’98. He returned to the road, recruiting uneasy volunteers who had felt the brutal force of British retaliation against the homesteads who rose with Tone and McCracken only 5 years before.

Having found it difficult to mobilise a northern army to rise once again in Antrim and Down, Russell returned to Dublin on hearing of the arrest of Emmet. However the city was swamped with crown forces and Russell himself was forced into hiding for nearly a month. Eventually captured, Russell was transported to Downpatrick under heavy guard where he was charged with High Treason.

On 21st October, on a scaffold erected at the front of Downpatrick Gaol, Thomas Russell was hanged, and beheaded.

A blatant and brutal attempt to extinguish the revolutionary spirit in Down, it was to be in vain.

In every generation since Russell walked defiantly to the scaffold in Downpatrick, the men and women of Down have continued in his footsteps to freedom.

So in paying tribute to Russell today, we recognise that he was not merely a great man of his time, but an inspiration for our time now too.