The site is being offered for sale at €25 million which is believed to be up to ten times the purchase price in 2016. The Councillors are urging Dublin City Council to withdraw the zoning of the site for housing unless strict guarantees are given that housing development will be commenced within six months.

"The Chivers site in Coolock is a perfect storm in terms of all that is wrong with the housing system. Here was a brownfield site that could and should have been purchased by Dublin City Council to develop social and affordable housing. Instead it was bought by developer Platinum Land and in 2018 Councillors agreed to re-zone it from industrial to housing on the promise from the developer that 350 affordable homes would be delivered quickly on the site. This was bumped up to 550 for which the developer Platinum Land got permission under the controversial Strategic Housing Development fast-track planning legislation.

"Three years later not a sod has been turned and we now learn that Platinum Land is offering the site for sale at €25 million, believed to be up to ten times what they paid for it. This is blatant profiteering, delivering massive profits for speculators rather than homes for workers and families.

"We are now calling on Dublin City Council to begin the process of withdrawing the zoning of this site for housing. The zoning for housing should not be restored unless strict guarantees are given that housing development will be commenced within six months. We want to see homes on this site, not further speculation. 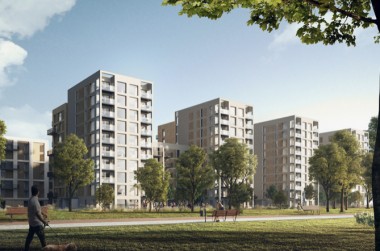 - Castles in the air, the Platimum Land image of the apartments they never built

“We will be raising this issue by way of an emergency motion at Dublin City Council's October meeting."