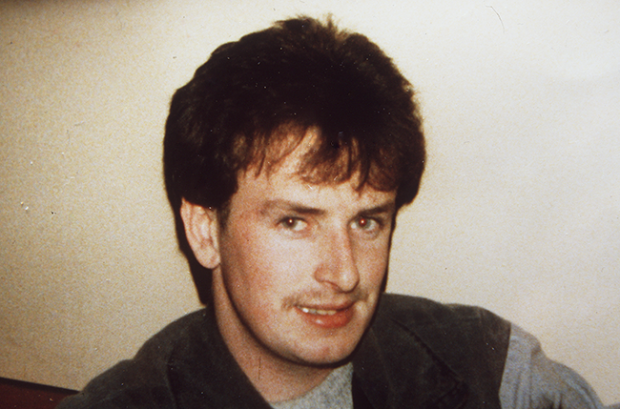 Sinn Féin welcomed the decision at the Belfast Crown Court last week that former Grenadier Guardsman David Holden, 51, will be formally charged with unlawfully killing Aidan McAnespie on 21 February 1988. Justice O’Hara rejected an application made on behalf of Mr Holden to quash the case on the basis that there was not enough prosecution evidence for the trial to proceed. Holden has admitted that he fired the shot that killed Aidan McAnespie.

Michelle Gildernew, Sinn Féin MP for Fermanagh South Tyrone said, “This is a step forward for the family in the campaign for the truth of what happened to Aidan”

“It also highlights the need for the Stormont House Agreement legacy mechanisms to be implemented in full so all families bereaved by the conflict can get access to truth”.

“There can be no amnesty for British state forces who murdered Irish citizens”.

In an interview with RTE, Aidan McAnespie’s cousin Brian Gormley said: “It’s a welcome decision on behalf of the family and has been a relief obviously because of all the talk going around at the minute about amnesties and stuff so you never knew what way Aidan’s case was going to be dealt with.”

The McAnespie case has been running since 1988 when Holden was initially charged with manslaughter, but this charge was dropped in September 1988. The McAnespie family had requested in 2014 that the Public Prosecution Service to re-examine the case. The PPS decided not to prosecute Holden.

Holden will now be formally charged with manslaughter on 10 September. In his judgment, Justice O’Hara said, “Different views have been taken in the past as to whether the evidence is sufficient to warrant a charge of manslaughter being brought, but in my judgement it is.” 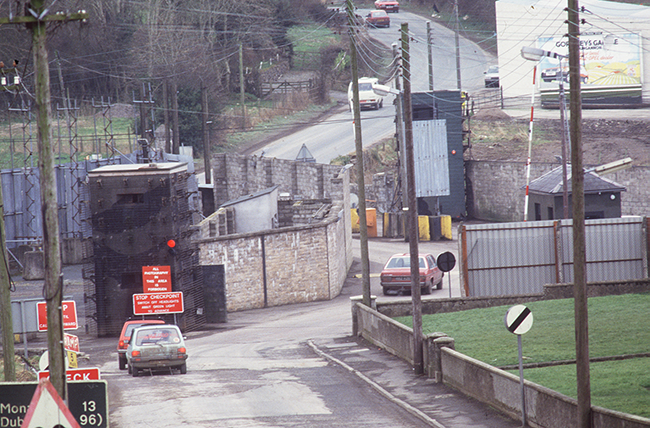 24 year old Aidan McAnespie was from the border town of Aughnacloy, County Tyrone. He was shot down in broad daylight, less than 300 yards from a permanent British Army/RUC checkpoint in the town. Aidan had been hounded and harassed by the crown forces since 1981, and right up until the morning of his death, when he and his mother, Elizabeth, were stopped and detained at the Aughnacloy Ulster Defence Regiment base for two hours on their way back from the wake of a relative.

Minutes before his murder, Aidan McAnespie had left his car on the Aughnacloy side of the checkpoint to avoid harassment from crown forces and instead walked through on his way to attend a GAA match some 500 yards down the road.

He had been the target of systematic harassment since the age of 17. On the day of his death, his movements would have been routinely noted by the army and police as he passed through the checkpoint.

His family said that a number of people saw Aidan arriving at the match and then leaving, apparently on his way to Todd’s tobacconist’s shop, situated about halfway between the checkpoint and the GAA pitch. Only minutes later, at approximately 2.50pm, he was lying dead on the roadway, killed by a single bullet.

When his sister, Éilish McCabe, saw her brother’s body lying on the roadway, there was a single bullet hole in his chest. From that moment, the British Army and the RUC have claimed that McAnespie was killed as a result of an “accidental discharge” from a machine gun.

Aidan’s sister now deceased told An Phoblacht in 1988 that, “It was cold-blooded murder. It’s a bit much to believe that a bullet hit a target almost 300 yards away with that accuracy and for the British Army to say it was an accidental shooting. That was shoot-on-sight. There’s no doubt in our minds about that. The harassment he was getting was unbelievable.”

Aidan was the youngest son of Elizabeth and John McAnespie, who had six children. His life had been threatened on several occasions by British forces; he was verbally abused daily and had been assaulted a number of times. This harassment also extended to being carried out by Gardaí.

The British Army and RUC knew Aidan McAnespie on sight, yet he was questioned on average twice a day, every day, as he passed through the Aughnacloy checkpoint going to and from his workplace.

Such was the public outcry in 1988 over the killing of McAnespie, that the then Fianna Fáil government instructed Garda Deputy Commissioner Eugene Crowley to carry out an inquiry. Commissioner Crowley’s report has still not been published. 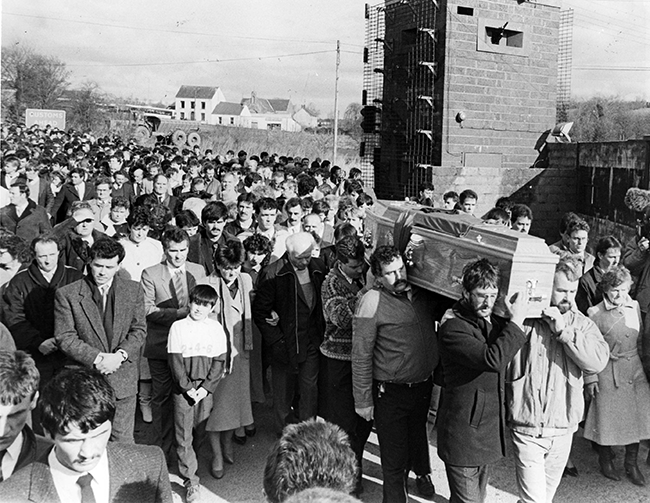 The funeral of Aidan McAnespie passes the checkpoint

In 2008, An Phoblacht reported on the 20th anniversary of the murder of Aidan McAnespie, which was marked by a weekend of sporting and cultural events that focused in the main on his beloved Aghaloo GFC at Aughnacloy on the Tyrone/Monaghan border.

The main speaker at the commemoration was Caoimhghín Ó Caoláin, then the Sinn Féin TD for Cavan Monaghan.

Below we carry an edited version of O Caoláin’s address:

It is very hard to believe that two decades have passed since Aidan McAnespie was murdered by the British Army at the age of 24. Many of us remember the terrible day when we heard the news that this young man had been gunned down in Aughnacloy and the pall of gloom that descended over communities along the border.

We were shocked but not surprised that the British Army had finally carried out the threat that they and their cohorts in the RUC had so frequently made to Aidan. For the story of Aidan’s death is not just the story of what happened that Sunday afternoon, 21 February 1988. It is a story of unrelenting harassment from the British Army, the RUC and, very often also, the Garda which had been going on since 1981 when Aidan was but a lad of 17.

What was Aidan’s crime in the eyes of the British crown forces? He was a young worker who had to cross the British-imposed border twice every day to travel to and return from his work at Monaghan Poultry Products. He was an honest and friendly and popular young man. He loved Gaelic games. He endured their harassment, stood up for his rights and protested against their conduct. He was Irish and he simply wanted to live his own life in his own country. That was his crime and for that his life was taken away.

It must be recorded that the British Army and the RUC were facilitated in their conduct towards Aidan and many others like him along the border at the time by the attitude and actions of the forces in the 26 Counties. This was because Aidan was also subject to harassment by members of the Garda Síochána, undermining any credibility the authorities in that state may have had in raising his case with the British Government. 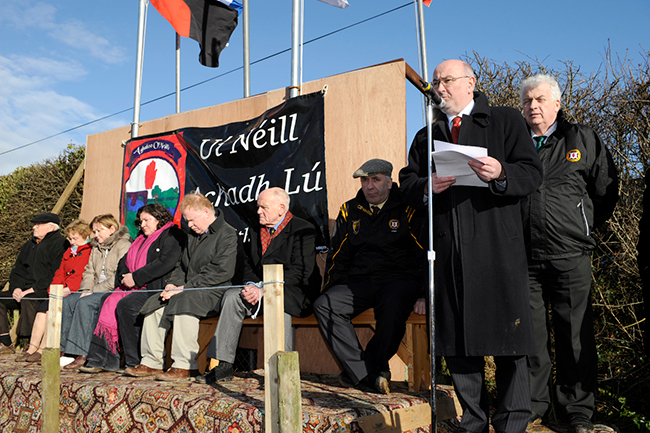 In one way Aidan was a victim of so-called security co-operation between the British state and the Irish Government. Less than three years before his death, the British and Irish governments had signed the Hillsborough Agreement and the main product of that Agreement was the Hillsborough Wall. Border posts and checkpoints like those at Aughnacloy were greatly reinforced by the British Army and RUC with full co-operation from the state forces in the 26 Counties. We in the border communities bore the brunt of that British military occupation.

And as we did so, successive Irish governments tried to hide the truth from the majority of people in the 26 Counties. When Aidan was murdered it was a time of political censorship. The people were not supposed to know the reality of British rule in our country. They were definitely not to be allowed hear the views of those who opposed British rule.

Such was the outrage at Aidan’s death that the then Fianna Fáil government ordered a Garda inquiry. During the course of that inquiry I met with Deputy Commissioner Eugene Crowley and outlined the litany of harassment Aidan had endured. A spokesperson for the Progressive Democrats went on RTÉ radio to say that the Garda inquiry should not listen to anyone connected with Sinn Féin, even if they had witnessed the murder.

That PD spokesperson was none other than Mary Harney. She was allowed to air her views on RTÉ but the elected representatives of Aidan and his community were denied by 26-County state censorship the opportunity to counter her disgraceful diatribe or to offer the truth of Aidan’s sad story.

Within weeks of Aidan’s death we saw the killing of three IRA Volunteers by British forces in Gibraltar and the tragedies which followed at their funerals in Belfast and subsequently. Those were dark times but through it all, families like those of Aidan McAnespie, kept up their struggle for truth and justice.

We are in a new era now. The British Army has been withdrawn from much of the Six Counties. The UDR is gone. The RUC is gone. The tower from which the fatal shot was fired is gone. Much has changed for the better. We are building a new, peaceful Ireland based on justice and equality. But much remains to be done. The terrorist armed force which gunned down Aidan must be removed completely from our country. The border and all that goes with it must be extinguished.

When that day comes we will walk across what was once the partition frontier and we will remember Aidan. We will know that he lives in every one of us and that when we walk and play together in a free, united and peaceful Ireland, Aidan McAnespie will walk and play with us.