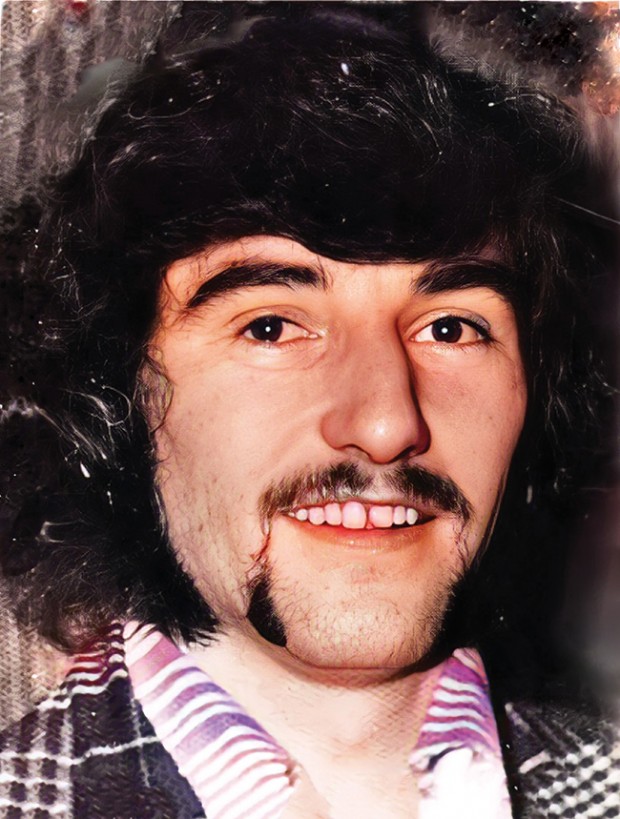 Kevin, an INLA Volunteer, was arrested in December 1976 and charged with conspiracy to obtain arms. He received a ten-year sentence in December 1977.

Kevin excelled at Gaelic games and had captained the under-16 Derry team which won an all-Ireland hurling trophy in 1972.

He stood as a H-Block/Armagh candidate in the Waterford constituency during the June 1981 general election in the South and polled extremely well despite missing out on election. 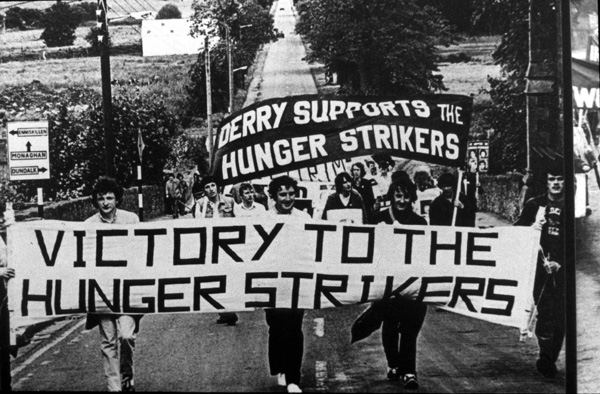 THE death of INLA Volunteer Kevin Lynch after 71 days on hunger strike occurred on 1 August 1981. It was followed the next day by that of IRA Volunteer Kieran Doherty.

They were the seventh and eighth men to die on the fast.

Kevin had been lapsing into frequent periods of unconsciousness in the last four days, having already lost his sight, hearing and speech. His family were at his bedside throughout the final days until he died in the early hours of Saturday morning.

His funeral took place the following Monday in his home town of Dungiven in County Derry. Between the return of his body to his home and the removal for Requiem Mass on Monday afternoon, a constant stream of mourners queued outside to pay their respects. The road was decorated with Tricolours and black flags, along with posters of Kevin Lynch. 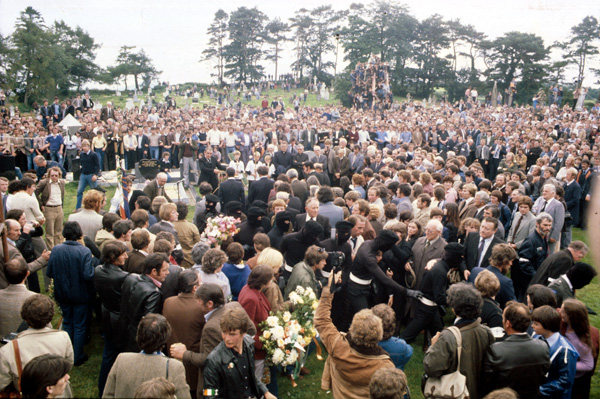 The RUC and the Ulster Defence Regiment made every effort to disrupt the funeral, holding up cars and forcing buses to park outside of town so that the passengers would have to make their way on foot. Ulsterbus in Belfast cancelled bookings at the last minute. Nevertheless, mourners came in convoys of cars and black taxis.

At mid-day, the coffin, bearing the Tricolour, Starry Plough, gloves and beret, was carried to the nearby church. The procession was led by a lone piper, followed by the Lynch family, relatives of other Hunger Strikers, and senior representatives of the IRSP and the broad republican movement, along with the National H-Block/Armagh Committee.

Five British Army helicopters flew overhead as the coffin entered the church grounds. Applause broke out momentarily as an 18-strong INLA guard of honour marched up to escort the coffin to the church door.

The priest who celebrated the Mass, Fr John Quinn, expressed outrage later when the INLA Volunteers escorting the coffin fired three volleys after it had left the church. So enraged was he that he refused to wear his vestments at the graveside.

This same priest had failed to refer to the suffering of the Hunger Strikers themselves and failed to condemn British intransigence. He tried to imply that the family had been opposed to the military funeral – an opinion later refuted by family members, who criticised the press and those who had made unsolicited comments on their behalf.

At the graveside, the piper played I’ll Wear No Convict’s Uniform. The Last Post was also played and wreaths were laid, including from both the INLA and IRA Army Councils. 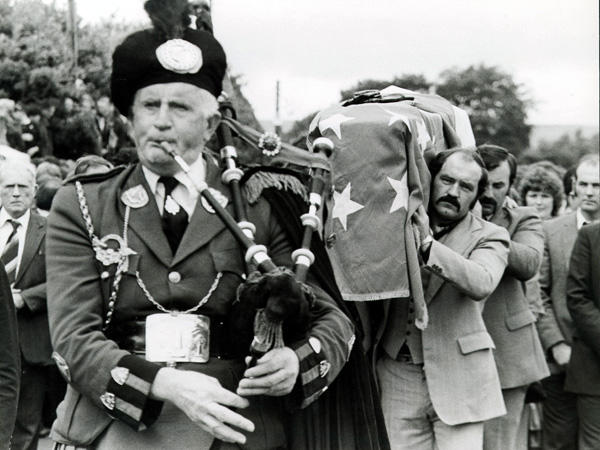 • A lone piper leads the cortege; (below) The funeral of Kevin Lynch makes its way through Dungiven 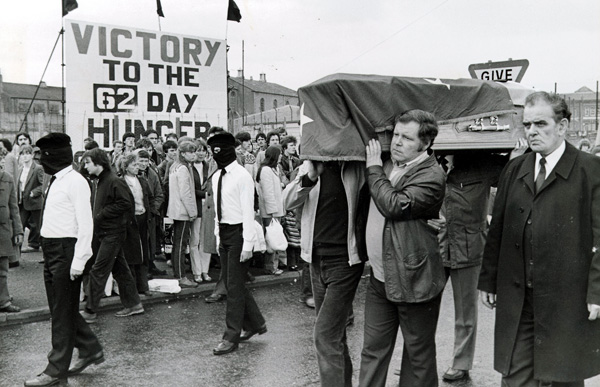 A uniformed INLA Volunteer then read a statement on behalf of the INLA Army Council, stating regret at Kevin’s death and applauding his heroism.

“Kevin Lynch has made the greatest sacrifice, and he has done it in the face of the repressive machinery of British imperialism and in the wake of the greatest gesture of defiance against those who control the prisons and those who rule and ravage our country,” he said.

A short oration was given by Councillor Seán Flynn from Belfast, Vice-Chair of the IRSP:

“Kevin epitomised all that is good in a young Irishman. Playing our national sports of hurling and football, he excelled at both and in 1972 captained his native county to win an All-Ireland medal at hurling.” 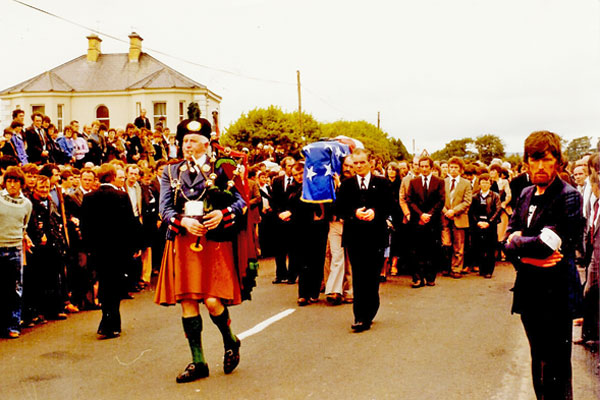 He went on to contrast Lynch’s Gaelic spirit with the performance of the Gaelic Athletic Association leadership off the field.

“Yesterday, the Derry County Board and South Antrim County Board asked for a minute’s silence before the All-Ireland Hurling Semi-Final between Limerick and Galway. It was no surprise to me when Croke Park refused. President Mac Floinn last week declared that no clubs, grounds or units were to be used for H-Block activity as it contravenes Rule 7.”

He added that work would be done to encourage support for the prisoners’ ‘Five Demands’ amongst the GAA.

“It must be remembered that if Kevin had conformed to the British authority he would be a free man today; but to Kevin, Kieran Doherty, Patsy O’Hara, Bobby Sands, Francis Hughes, Raymond McCreesh, Joe McDonnell, Martin Hurson and the continuing Hunger Strikers, they knew if the political prisoners were criminalised then the British Government would attempt to criminalise the struggle on the outside.” 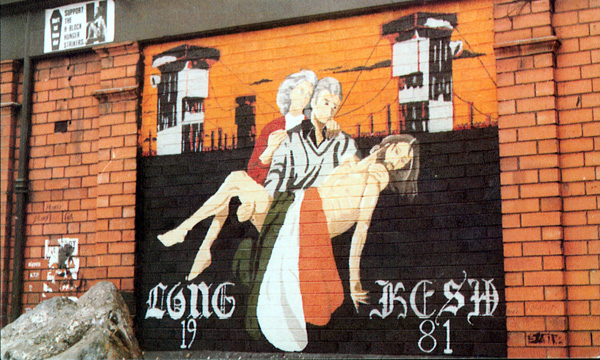 He added that Kevin Lynch knew the consequences of going on hunger strike.

“Deprived of every other means of defending his political integrity, he defended it with his life. Those who imply that he might have been ordered to do so, or could be ordered to cease to do so, fail to understand the depths or the personal integrity – the individual courage and the dedication to the principles he believed in – that made Kevin Lynch the person he was.”