Centenary of the Truce of July 1921 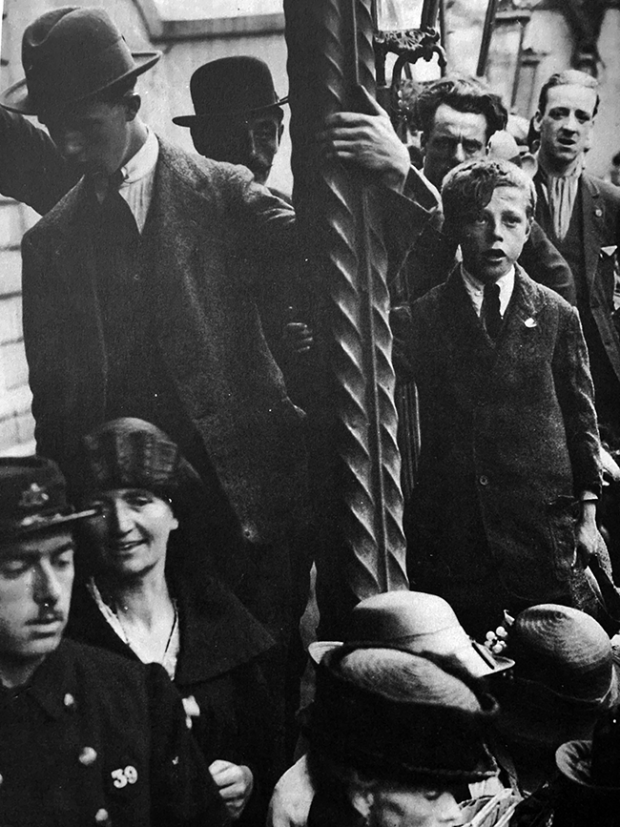 • A boy sings to the crowd. Bottom left is James Conway of the Dublin Fire Brigade which was tasked with policing the event. Conway was an active supporter of the IRA

The Commander-in-Chief of the British Forces in Ireland Nevil Maready once wrote that he “loathed” the country and its people “with a depth deeper than the sea and more violent than that which I feel against the Boche [Germans]”. Yet in July 1921 it was Macready who had to lead the British Army delegation into Dublin’s Mansion House to meet the representatives of the Irish Republican Army to arrange a Truce between the two forces. 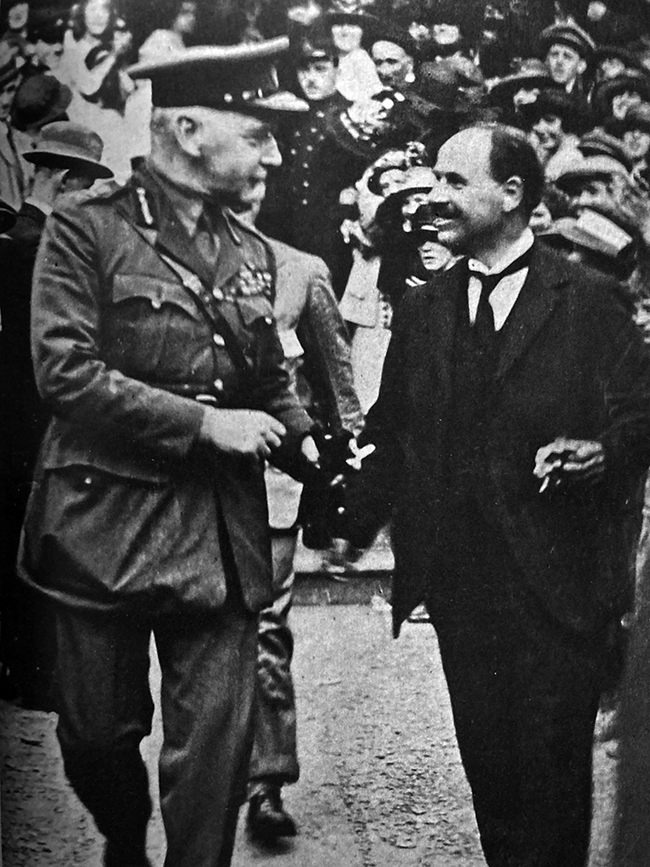 That was 8 July 1921. Three days earlier Field Marshal Henry Wilson, Chief of the British Imperial General Staff, wrote in his diary that he had talked with Macready and others about the growing number of their officers and men who were applying not to be sent to Ireland when ordered there. In May Wilson had expressed the belief that unless they “crushed out the murder gang this summer, we should lose Ireland and the Empire”. But by July it was clear that military defeat of the IRA was not possible and Ireland and the Empire must be held in a different way and by other means.

That different way was the implementation of the Government of Ireland Act which partitioned Ireland and which had already seen the ‘Northern Ireland’ parliament established. In the wake of its first meeting British Prime Minister Lloyd George wrote to the President of the Irish Republic Éamon de Valera inviting him to meet to discuss a settlement. Lloyd George’s letter set pre-conditions in that it addressed de Valera as the leader of ‘Southern Ireland’ and the invitation was a joint one with James Craig as leader of ‘Northern Ireland’.

De Valera replied that he was willing to talk peace but could “see no avenue by which it can be reached if you deny Ireland’s essential unity and set aside the principle of national self-determination”. He said he would meet Unionists as representatives of the political minority in Ireland. This was the beginning of a long and tortuous correspondence between de Valera and Lloyd George that would eventually lead to formal negotiations in London. But in the meantime enough had been done to allow a Truce between the British forces and the IRA to be arranged. 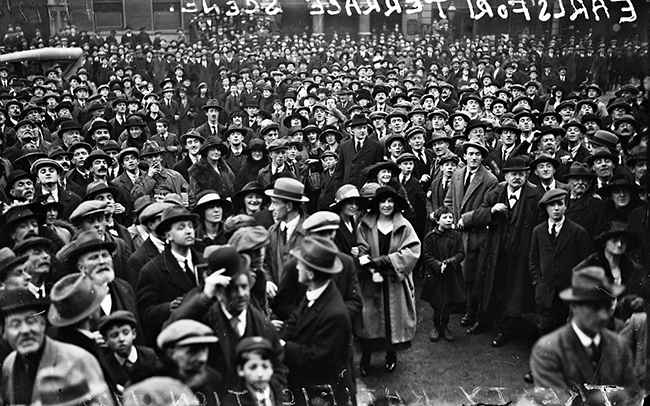 • The scene in Dawson Street 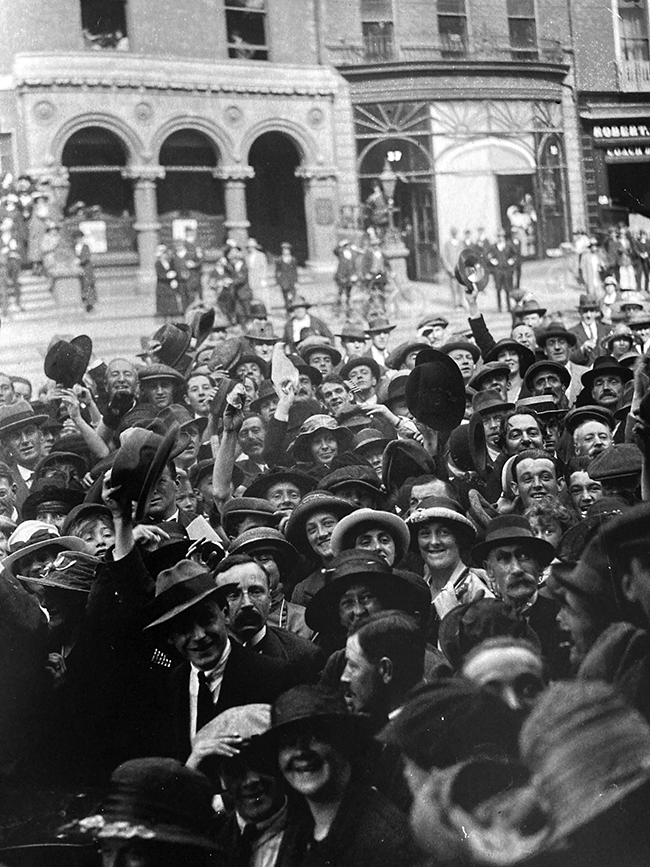 At the Truce talks in the Mansion House on 8 July Macready was met by Robert Barton and Éamonn Duggan on behalf of the IRA. Crowds gathered outside the building in anticipation of a cessation to the conflict which had cost so many lives and which had seen the civilian population subjected to the terror of the British regime, led by the Auxiliaries and Black and Tans. Lord Mayor of Dublin Laurence O’Neill hosted the talks and at 3pm on 9 July the Truce terms were agreed. It was hugely significant that the British government which had tried to portray the IRA as a “murder gang” now had to recognise them as an army and both sides agreed to a ceasefire and a set of restrictions on their activities.

The Truce came into effect on Monday 11 July. There was much public rejoicing but Republicans warned that the Truce was not a settlement and England had not recognised Ireland’s right to independence and unity. In Belfast the eve of the Truce was another Bloody Sunday as Orange mobs and Special Constabulary carried out a further round of pogrom against Catholics, burning out 161 homes. 15 people were killed on that day. 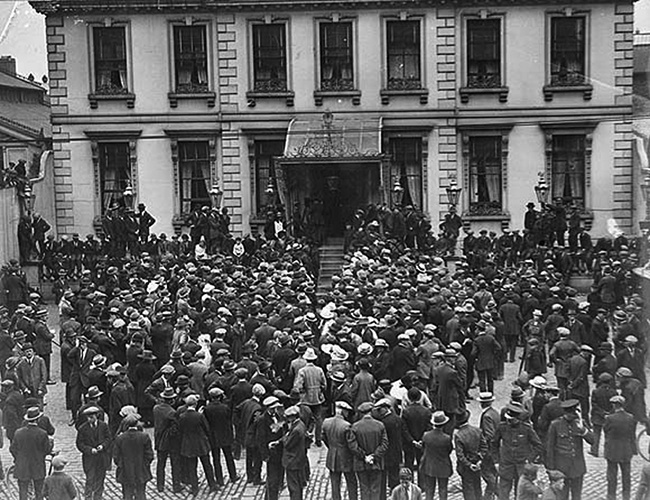 Of the Truce Tom Barry wrote:

“The British Prime Minister’s invitation to the Irish leaders to attend a conference to end the war and the terms of the Truce are perhaps the best indication of all as to the success with which the Irish people waged and maintained guerrilla war…Gradually it dawned on me that the forcing of the enemy to offer such terms was a signal victory in itself; that days of fear were ended, at least for a time, and that one could return to normal life, away from the hates, the callousness and the ruthless killings of war….” (‘Guerrilla Days in Ireland’).

“The establishment of the Northern Parliament had given the British an asset of such importance that on the day of its opening the Government had realised that it could afford to make a larger offer than ever before to Sinn Féin and Lloyd George had sent his invitation to a conference.” (‘The Irish Republic’).

“But there was one constant reminder that a Truce was not peace. In parts of Ireland the Terror went on – in the North-East. There the Orange leaders closed their ears to the King they had so often named and sung to. In his opening of the Six-County Parliament, he specifically called on them for ‘forebearance and conciliation, to forgive and forget, to join in making for the land they love a new era of peace, contentment and goodwill’. The response was the torch, the cudgel, the bomb through the window.” (‘The Four Glorious Years’).

“Our area was improving daily, the people were becoming more staunch in their allegiance to the Republic, and the British government no longer functioned…Why had the Truce been ordered? We were gaining ground, each day strengthened us and weakened our enemy; then why was it necessary to put a stop to hostilities? We had no time to plan an attack on any of the local posts as we would have wished and the day of the Truce dawned leaving us in a state of uncertainty.” (‘The Singing Flame’).