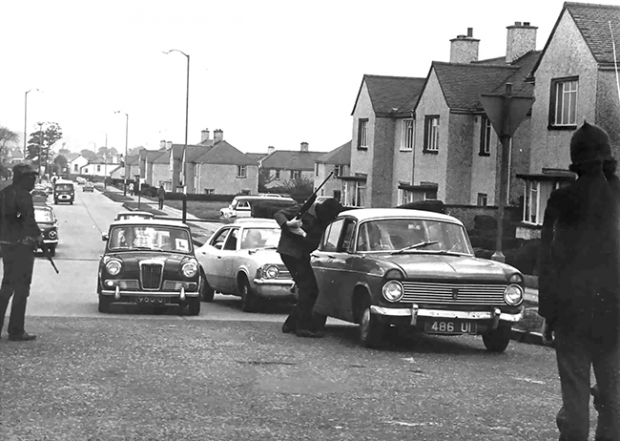 Somebody sent me a grainy photo recently with the Irish Republican legend, Tom Barry, in it. Standing tall and erect in his seventies, he is surrounded by a group of young, mostly teenage, Irish Republican activists from Belfast. The year was 1972 and the photo was taken in Cork at a Republican monument. It commemorated Volunteers, most of whom Tom Barry had fought alongside, who had died in the cause of Irish freedom.

The photo brought back memories of that most difficult and most active period of the conflict.

1972 is accepted as the worst year of the three decades of conflict in terms of casualties and fatalities across all sides. Internment without trial was introduced by the British in August 1971. The first arrest operation, which imprisoned hundreds of Nationalists, netted very few republican volunteers, who had been warned to stay out of their homes.

However, by the start of 1972, the arrests were having a bigger impact on IRA ranks. In Belfast in particular, the numbers of volunteers being interned meant that the average age of those continuing the struggle outside jail was under 20 years.

There were British troops on the streets, all day and night. Shootings and gun battles were a daily occurrence in the war of attrition. I had been ‘on the run’, after escaping from Mountjoy Jail in Dublin in January, but, with internment, basically all activists were on the run.

It was in these circumstances that small numbers of activists were given £15 spending money, and offered a weeklong break from the intense atmosphere of war-torn Belfast. I accepted immediately and travelled with two other friends, John and Davey, from the Ballymurphy area. We stopped off at Rathfarnham on the outskirts of Dublin to visit John’s family, who had left Belfast to get some respite from ‘The Troubles’.

The Fuscos were a large family of 13 children and were living in a not very big caravan in an otherwise empty field. John’s younger brother, Angelo, showed us where the boys were sleeping, which was a makeshift hut about 4ft high.

We were greeted with hugs and handshakes by John’s parents. There was a huge pot of Bolognese cooking on a campfire and we were fed along with the rest of the clan. I was shocked by their living conditions and handed Mrs Fusco a few pounds when leaving. She refused to take it, but I insisted that we wanted her to have it. John found out about this later and told me his Mammy was really grateful, but the problem wasn’t the lack of money but of a house to live in.

We travelled on to our pick-up point and met with others from Belfast. Fra McCann and Spotty from the Lower Falls were there, but I didn’t know them at the time. I did know Gregory Fox from the Iveagh area as we had been ‘paper-boys’ together years earlier and some of the other faces were familiar.

We three from the Murph stayed with a young farming couple, Phil and Tim, who treated us like kings. The food was great and Tim kindly, though perhaps foolhardy, took us out to hunt hares at night. Catching our dinner in the headlights was the easy part, actually hitting any of the unfortunates was a fiasco. We had fish for supper!

We were a few miles outside Middleton and were dropped in one evening for a walkabout so we made straight for a pub. After a few jars, we walked about the town and heard, what we thought was rebel music. In we went for the craic, only to find a dance floor full of couples waltzing to the music! 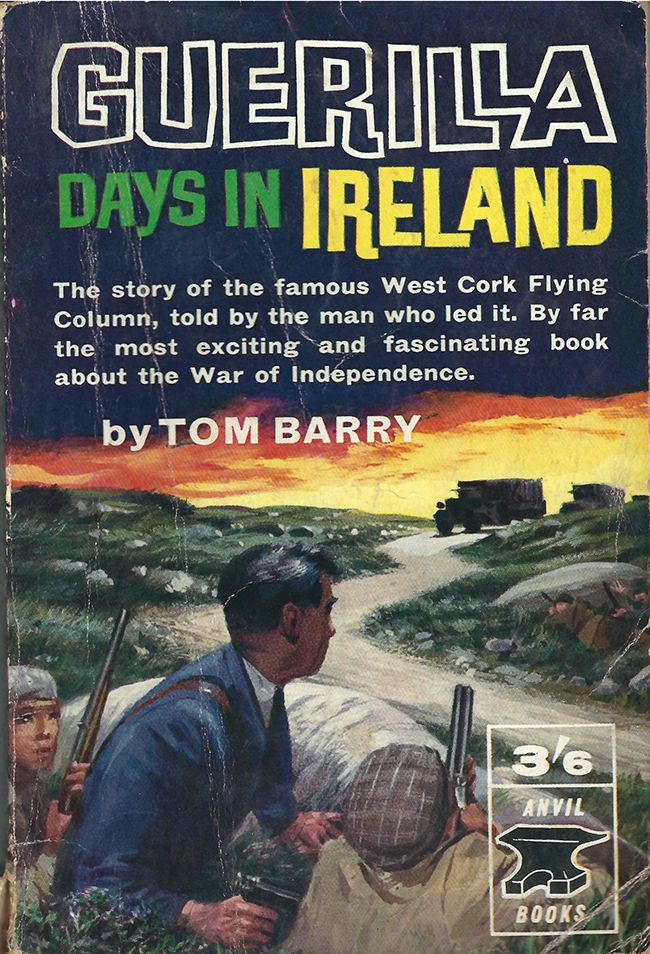 We were brought to Cork City for the day and met the other lads. We were asked did we want to meet Tom Barry. I had read his book ‘Guerrilla Days in Ireland’, and so jumped at the chance.

We were brought to a three-storey house on a main road and invited to wait in a large parlour, furnished in old-style dark furniture. We were accompanied by three or four men in their early thirties. After about 15 minutes, the door opened and a young man announced; ‘Let me introduce Commander Tom Barry’. At this point, the other three men jumped to ramrod attention as Tom Barry entered.

The Belfast contingent had been lounging about in chairs or on the arms of chairs. There was no etiquette in our minds, but the quick movement of the others prodded us into standing positions, though in a much less disciplined fashion.

Tom entered with a nod and a smile and went around the room shaking hands and welcoming all of us individually. Not taking his fame or status as a renowned guerrilla strategist and soldier for granted, he introduced himself quietly. Tom welcomed us as freedom fighters who were carrying on the struggle for an independent and United Ireland and joked that it was a younger man’s war and he might be slightly too old to be a combatant.

He asked questions; where we were from, what moved us to join the fight, what was our strategy and tactics in urban struggle, and how we thought we were doing against the huge British military force ranged against us.

We tried our best to answer his questions, though we did not see ourselves as leaders in strategy or tactics. However, he drew answers out of us quietly and with respect, despite our ages. He could not have been much older than us when he had led the Republican men and women of Cork against a British Army hardened by battle in WW1. He dealt with his audience as equals and won respect even from those who knew little of his exploits.

Only when we had finished did he start talking of his own experiences of guerrilla warfare. He spoke with a quiet authority and without bravado or obvious ego. He was there to learn as well as to teach, without being obvious. He answered all our questions with honesty and treated all questions as sensible, despite some of them being naïve or silly. He discussed tactics without being overtly critical, but left some of us thinking about points that he had raised.

I felt privileged to have met him and felt stronger in my resolve to continue my activism. I picked up the same feelings from the conversations afterwards with others who were there. It was not that our meeting was a military or political lecture; it was more a friendly and encouraging conversation between two generations of people fighting for the same just cause.

We met again that night, at Tom’s invitation, for a drink in the side snug of a local bar. Belfastians being - well from Belfast - the slagging and craic was mighty, and Tom seemed to enjoy the session. He also bought a round or two of various beverages, which enamoured him to us even more.

Days later, we were back in the middle of it all with our batteries well charged after our Cork R and R. 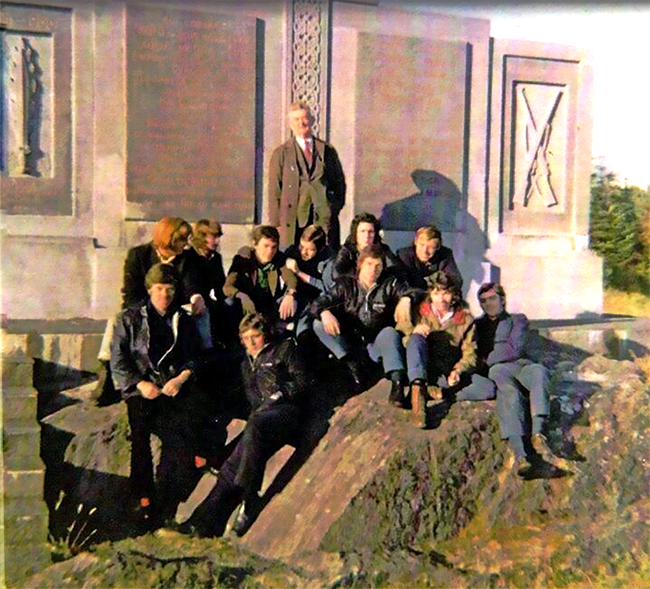 As a postscript: The grainy photo mentioned earlier was sent to me on the basis that I was identified in it and I tweeted it out. While it was the same period in which I met Tom, a comrade of the time, Frank, set me straight that the person identified as me was actually called ‘Phil’. Frank assures me that Phil was much better looking than yours truly then, and more annoying, has weathered much better also!