Demand for change set to grow 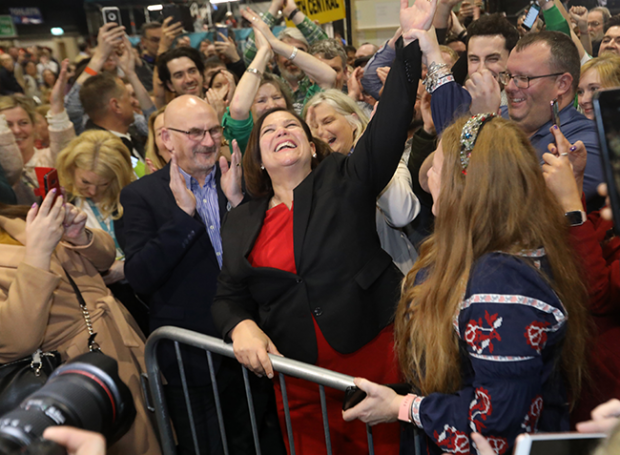 Over a year since the most historic Irish general election in a generation, its reverberations are still being felt. Every election since the foundation of the Irish state has resulted in governments led by Fianna Fail or Fine Gael. For almost 100 years, since the Partition of Ireland, nothing like the 2020 election has ever happened.

With Sinn Féin winning a plurality of votes, the election finally marked the end of the old, two-party system in the 26 Counties. Not only that, but Sinn Féin topped the poll in constituency after constituency across the state.

While overall support for Fine Gael and Fianna Fáil has been on a downward trajectory over several general elections, their combined vote share of 43% in 2020 was the lowest ever.

The scale of the change that had occurred was evident when Mary Lou McDonald became the first person not from Fine Gael or Fianna Fáil, and the first woman, to get the biggest support in a Dáil vote for Taoiseach on 20th February. Dáil seat allocations put Sinn Féin, Fine Gael, and Fianna Fáil on 37, 35, and 38 seats respectively. 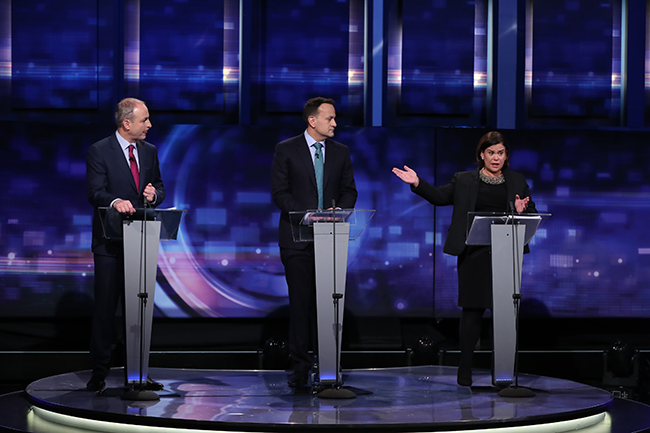 Mary Lou McDonald became the first person not from Fine Gael or Fianna Fáil, and the first woman, to get the biggest support in a Dáil vote for Taoiseach

Sinn Féin won the same number of seats as Fianna Fáil, but the latter were awarded the extra seat due to the automatic re-election of the outgoing Fianna Fáil Ceann Comhairle. It’s worth recalling that the election was preceded by an increasingly dire performance by a Fine Gael Government supported by Fianna Fáil.

The election itself was precipitated when Health Minister Simon Harris faced a Dáil motion of no-confidence as the health system verged on collapse with health workers forced to abandon intolerable working conditions and elderly patients left to suffer for days on hospital trolleys.

An arrogant administration was seen increasingly to be in hoc to property developers and vulture funds, as hard working families faced unaffordable housing, spiralling rents, and an attack on pension rights.

A growing desire for change and a fairer, more equal society - encouraged by the landmark referendum victories of recent years in relation to marriage equality and the 8th Amendment - saw voters increasingly rejecting 26-County electoral orthodoxy.

More and more people saw Sinn Féin as offering a better way forward for an Ireland in obvious need of change. The party captured the mood and the political calibre of its spokespersons drove the message home. 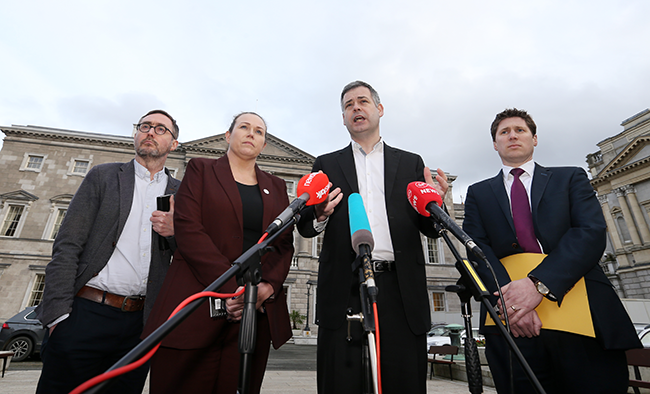 On housing, healthcare, the cost of living, workers’ rights, and social supports, the party had the policies and representatives to defeat the arguments of its opponents again and again.

It offered a genuinely alternative form of politics to that of government by insiders for insiders - the corrupt old boys’ network that has dominated and undermined Irish politics for generations.

Sinn Féin went to the electorate with a clear message - it understood the challenges they were facing in their daily lives - problems such as the housing crisis, the costs of childcare, people facing dole queues at 65 and rip-off insurance costs - issues that Fine Gael and Fianna Fáil ignored.

What’s more, Sinn Féin put forward clear, workable solutions. It offered for the first time, a government not for the bankers or property developers, or for the multinational corporations, or the insiders and cosseted vested interests, but a government for the people.

The message was that while there may have been an economic recovery, it hadn’t benefited ordinary people but that it should and it could. It was a message which resonated. It wasn’t just the establishment parties who were out of touch and unprepared for the 2020 election result.

Much of the media, right from the start, sought to frame the election as a two-horse race between Fine Gael and Fianna Fáil and RTÉ initially excluded Mary Lou McDonald from the main TV debate.

The election had seen an organic #VoteLeftTransferLeft campaign on social media which captured the imagination of many voters and Sinn Féin transfers ensured the return of left-wing TDs from other, smaller parties. Establishment reaction to the election result was one of shock and anger.

Sinn Féin sought to form a left-led government which would best represent the verdict delivered by voters but, in the circumstances, this proved not to be possible.

The party was also consistently clear on its willingness to enter discussions with all parties, but this was spurned by Fine Gael and Fianna Fáil who were only interested in carving up political power between themselves to keep Sinn Féin out and maintain the status quo.

While Sinn Féin’s performance was historic, the full potential was not realised, partly because the party only ran 42 candidates, and ultimately because the political establishment circled the wagons to keep Sinn Féin out of government.

Despite all this, the clearly expressed desire for political change has steadily grown since the election as the harsh reality of Fianna Fáil and Fine Gael in power together has hit home.

The coalition has stumbled from one scandal to another as the traditional arrogance and entitlement of Fianna Fáil and Fine Gael was exposed from the get-go and has continued since.

Within his first week as Taoiseach, Micheál Martin faced a scandal that eventually forced him to sack his Agriculture Minister Barry Cowen. The following month saw Cowen’s successor Dara Calleary embroiled in the ‘Golfgate’ scandal and eventually forced to resign.

In July, it emerged that with three ‘super junior ministers’ in Government, legislation only allowed for two of them to get paid at a higher rate. Rather than state openly that it intended to allow the third junior to bridge the €16,000 pay gap, the Government said nothing and tried to sneak the changes through in an amendment to a separate piece of legislation. 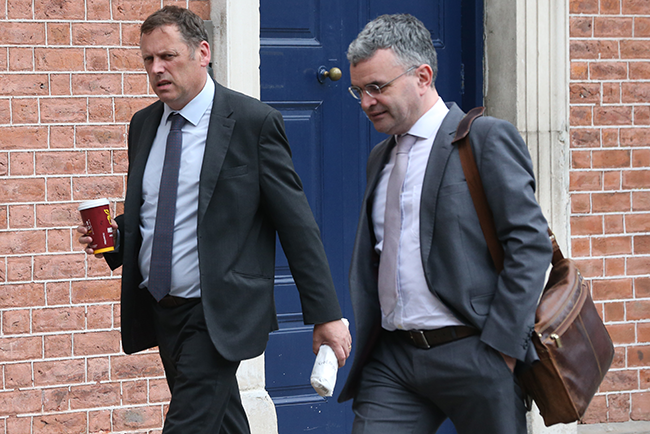 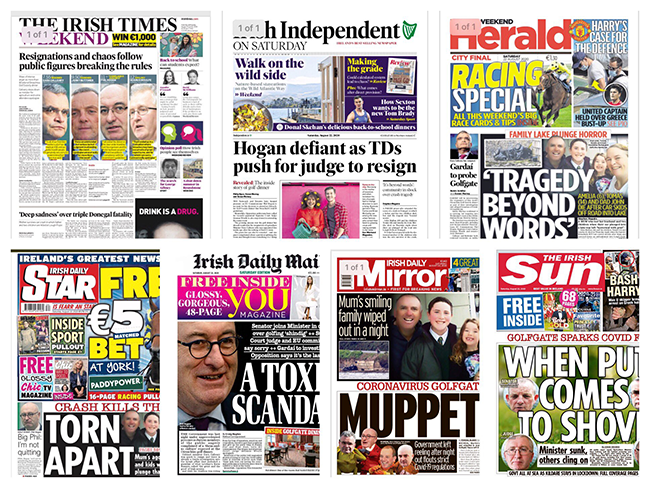 On stark contrast to this, it also emerged in July that social welfare recipients were being stopped at the airport by social welfare officers and Gardai seeking their PPS numbers. Those in receipt of the Pandemic Unemployed Payment of €350 per week were having their payments docked if they travelled outside the state.

In October, it emerged that Tánaiste Leo Varadkar leaked a confidential, unpublished copy of a GP contract agreed by the Irish Medical Organisation (IMO). A copy was given to a friend who was then the president of a rival doctors union the National Association of General Practitioners (NAGP). A familiar pattern has again been established of favours and preferential treatment to a circle of ‘insiders’.

With Varadkar facing no sanction whatsoever from Taoiseach Mícheál Martin and having failed to give any credible account for his actions, Sinn Féin tabled a motion of no confidence in the Tánaiste.

The ‘golden circle’ was further exposed by revelations of a ‘revolving door’ through which former Ministers take up senior positions in the corporate and banking sectors, raising the prospect of serious conflicts of interest.

From the beginning, the Government’s handling of the Covid-19 Pandemic has been marked by confusion, mixed messages, and poor decisions. In July, there was much confusion over the Government’s ‘green list’ of countries and territories, passengers from which would not have to undergo quarantine in Ireland.

There has been no serious attempt to coordinate Ireland’s Covid-19 response on an all-island basis, with the government abandoning any effort to realise the country’s geographical advantage as an island.

Since the beginning of the Covid-19 crisis, it was clear that meat processing was a sector with workers at higher risk of contracting the virus due to the nature of their work. However, despite the Oireachtas Covid-19 Committee making a range of substantial recommendations to protect the health and safety of such workers, the government has failed to fully implement them.

Mícheál Martin’s government also decided not to introduce mandatory post-arrival testing and hotel quarantine for all non-essential arrivals, flying in the face of the advice from NPHET, the Chief Medical Officer, and indeed going against widespread public opinion on the matter 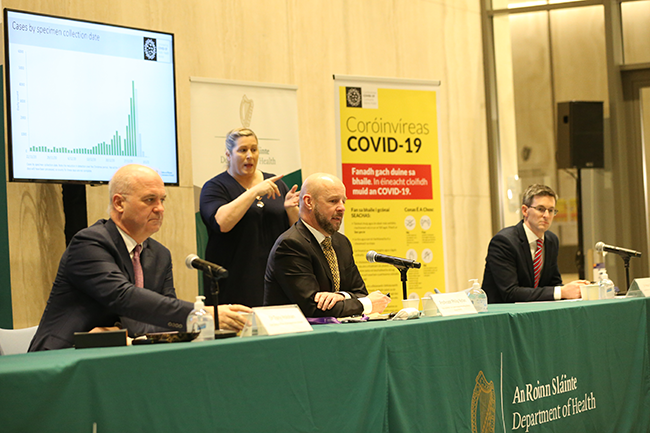 Meanwhile, Sinn Féin’s performance as a solution-oriented opposition is helping to build support further among even wider sections of the population. Successive opinion polls since the election demonstrate that Sinn Féin support is now widespread across all demographic groups. Irish society has undergone profound change in recent years and the political system is merely playing catch-up.

The journey towards a United Ireland took another important step forward with the 2020 election. Sinn Féin kept the issue front and centre in its election campaign, strongly urging the need for any incoming Irish Government to prioritise preparation for unity.

Given Sinn Féin’s position as the main political opposition, along with opinion poll evidence that a growing majority in the 26 Counties supports a move towards Irish Unity, means that the Irish political system must engage with the issue more seriously and more actively than it has ever done.

The Ipsos/MRBI exit poll at the General Election showed that 57% of voters in the 26 Counties believe there should be referendums North and South on Irish Unity within the next five years.

Since the election, the establishment parties supported by certain predictable voices in the media, have sought to stem the rise of Sinn Féin by seeking to cast up historical events from the conflict in the North. This strategy has already demonstrably failed, based as it is on an erroneous, deeply patronising, and elitist view of Sinn Féin voters.

Failing to recognise the political, societal and cultural developments in Irish society over recent years, the conservative establishment has adopted a facile understanding of Sinn Féin’s support base as young, naive and ill-informed about the party and wider Irish history.

However, what is now very clear is that support for Sinn Féin transcends most demographics of age and that it is currently the most popular party for the majority of voters ranging in age from 18 to 64.

The reality is that many voters not only understand clearly Sinn Féin’s pivotal role in the Peace Process, but appreciate the party’s efforts and analysis of the conflict and the manner in which it contributed to its resolution.

Government attacks on Sinn Féin have become a substitute for debate on policy, highlighting the condition of denial in which the leaderships of Fianna Fáil and Fine Gael now find themselves.

The alternative - to face the truth that Sinn Féin has a bigger democratic mandate than either of them - is too uncomfortable to face.

Meanwhile, the political, economic and societal weaknesses exposed by the Covid-19 pandemic have deepened the desire for change - rents were frozen, evictions were stopped, private hospitals were opened further to public patients, new income supports were provided.

Much, much more needs to be done, and the advances made in all these areas should not be reversed when the pandemic is defeated.

As Sinn Féin consistently said - all these things were always possible. It should not have taken a pandemic to prove this. People now know that it is political will which is key.

The same people and parties who denied the possibility of greater government intervention in the economy are also those who have been the greatest naysayers on the need for proactive preparation for a United Ireland.

As usual, the people are ahead of the political establishment. Having seen that real change is within reach, they are emboldened. While the old establishment may band together to delay change, they cannot stop it.