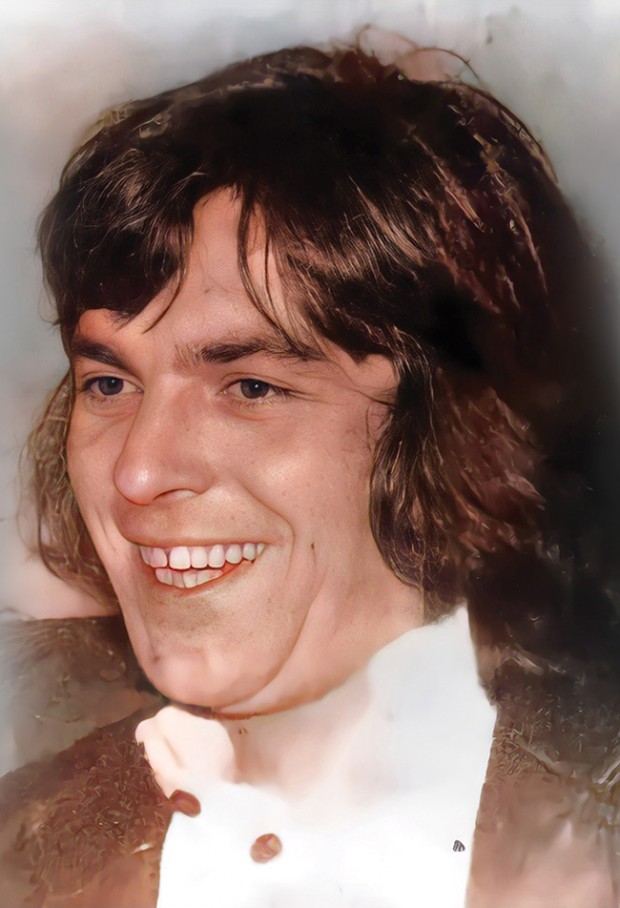 JOE McDONNELL was the fifth Hunger Striker to die due to the intransigence of British Prime Minister Margaret Thatcher and her government.

Born on 14 September 1950, the fifth of eight children in a family from the Lower Falls in west Belfast, Joe eventually married and moved to Lenadoon.

Joe volunteered to replace his good friend and comrade Bobby Sands, who he was captured with on active service in October 1976, joining the hunger strike on 9 May.

A well-known and very popular man in the Greater Andersonstown area, Joe had a reputation as a quiet and deep-thinking individual, with a gentle, happy go-lucky personality, who had, nevertheless, a great sense of humour, was always laughing and playing practical jokes and who, although withdrawn at times, had the ability to make friends easily.

He had joined the Republican Movement soon after the introduction of internment without trial in August 1971. He was himself interned on the prison ship Maidstone in 1972 and in Long Kesh from 1973 to 1974.

Arrested and jailed for a commercial bombing operation, Joe was sentenced in September 1977 to 14 years’ imprisonment. He joined the Blanket Protest fro the restoration of political status and was denied visits unless he wore the prison uniform. His wife, Goretti, and their two children had not seen him in the more than three and a half years since he was sentenced up until the hunger strike and his dying days.

In June 1981, Joe was a general election candidate in the Sligo/Leitrim constituency and narrowly missed becoming a TD by 315 votes. 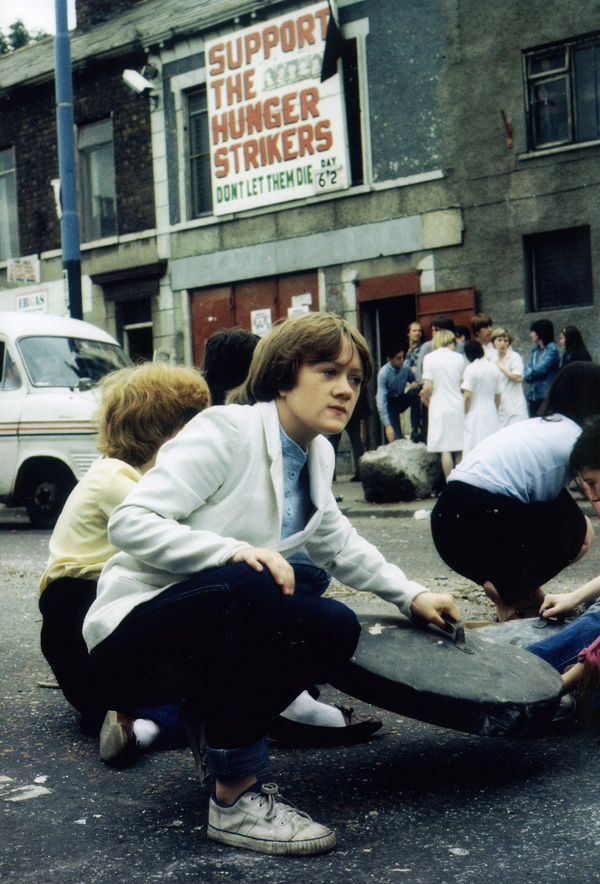 The death of Joe McDonnell

IRA Volunteer and Hunger Striker Joe McDonnell, from Lenadoon in west Belfast, passed away at 5:15am on Wednesday 8 July after 61 agonising days on the Hunger Strike. His wife Goretti had maintained an almost constant vigil by his side but, with a callous act of disregard for her feelings when he died, the RUC called her in, ostensibly to identify the body.

From Wednesday evening through to the Friday morning, Joe’s body had lain in state in the family home. During this time, thousands of people filed past the coffin to pay their respects to the fallen Volunteer.

In a reflection of the effect the Hunger Strike had throughout nationalist Ireland, those filing past came from throughout the country. There were people from Dublin, Sligo, Leitrim, Crossmaglen, Tyrone and further afield.

Individuals who paid their respects included relatives of other Hunger Strikers – Rosaleen Sands, mother of Bobby; and Pauline McGeown, wife of Pat who was at that time on hunger strike. A particularly poignant visit was that of Jimmy Dempsey, whose 16-year-old son John, a member of Fianna Éireann, had been shot dead by a British soldier in the disturbances following Joe McDonnell’s death. Also present was Joe McDonnell’s brother Frankie, one of the longest-serving Blanket Men who had been released for 12 hours to attend the funeral.

It was a measure of the ripple effect that the Hunger Strike – and more particularly British intransigence and brutality – were having on the nationalist community that at the same time another Blanket Man, Tommy Cosgrove, was out on temporary release to attend the funeral of his sister, Nora McCabe, killed by an RUC plastic bullet, also in the disturbances following the death of Joe McDonnell. 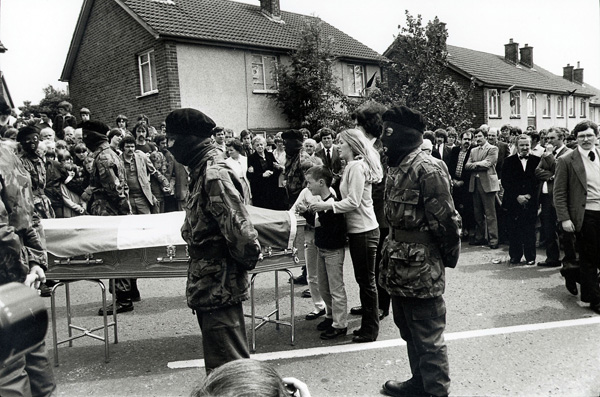 • Joe McDonnell’s wife Goretti, his children and his brother Frankie pay their respects

At midday, the coffin was sealed and a Tricolour and the black beret and gloves of an IRA Volunteer were pinned to it. With British Army helicopters hovering noisily and provocatively overhead, the cortege moved off. Led by a lone piper, it made its way to Oliver Plunkett Church at the top of Lenadoon for Requiem Mass.

After the service the coffin was carried towards Milltown Cemetery. Joe’s three brothers were among those carrying the coffin and it was flanked by his wife Goretti and their children Bernadette and Joseph and other members of the immediate family. When the cortege reached the Andersonstown Road the coffin was place on trestles and an IRA firing came forward and rendered a final salute.

After observing a minute’s silence the IRA firing party disappeared into a nearby garden. A barrage of high-velocity gunfire was heard as it became obvious that British crown forces were attempting to kill or capture members of the IRA firing party. Simultaneously, the British Army and RUC opened up on the cortege with a hail of plastic bullets amidst scenes of pandemonium and panic. In the assault, one of the mourners (a brother of then Sinn Féin Vice-President Gerry Adams) was shot and seriously wounded.

The head of the funeral cortege had moved on a few minutes before the attack and was making its way towards Milltown. Six IRA Volunteers took the coffin on their shoulders for the last leg of the journey to the Republican Plot.

Chairing the graveside proceedings was Eamon McCory of Sinn Féin. He extended the sympathies of the Republican Movement to the family and went on to condemn the SDLP and the Dublin Government who had not applied sufficient political pressure on British Prime Minister Margaret Thatcher. As a result, Thatcher was claiming that not one responsible person in Ireland was asking her to concede the prisoners’ 5 demands. 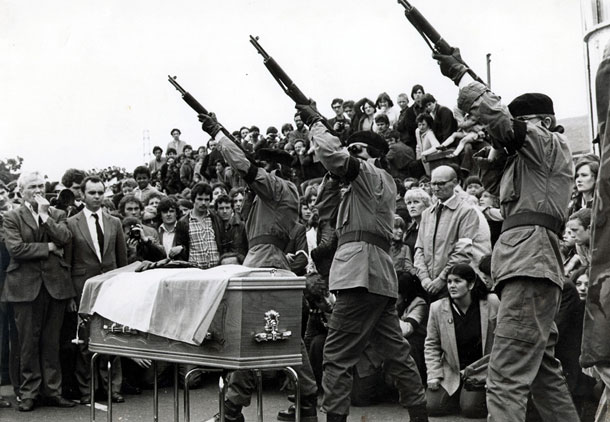 After the blessing, conducted by Father Matthew Wallace, John Joe McGirl, Chairperson of Leitrim County Council and election agent for Joe McDonnell in the 26-County general election, gave the oration.

Speaking of the deceased Hunger Striker, he said:

“He has died rather than debase the cause he served, rather than live with the forced tag of criminality on him. His courage is an inspiration, not only to his fellow prisoners, not only to the Irish people who admire such courage – the world stands in wonder and admiration, accepting that men such as Joe McDonnell are not criminals but patriots.” 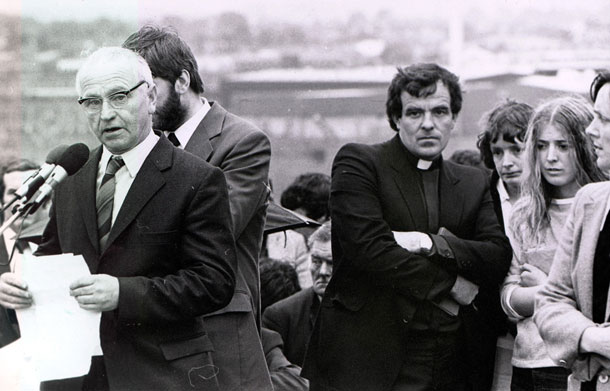 “The policy of England and the English government towards Ireland down through the years has been one of jailing, shooting and hanging. Today, this week, their policy has changed somewhat. They have left over hanging and replaced it with the rubber bullet, plastic bullet and live round.

“Men, women and children are murdered in the streets of Belfast and Derry and in the occupied part of the north-eastern Six Counties. I want to say here that the responsibility for this lies with the British Government, and I say to the British Government that she has no right in our country and never had, and that the way forward is for her to withdraw her forces from the occupied part of our country and let the Irish people resolve their differences themselves.

“She is not here as a friend, she is here as a treacherous foe, and we recognise her as such.”

In conclusion he said:

“We will build Joe McDonnell a memorial, we will build so many of his comrades who are buried here a memorial, and their memorials will be the freedom and the unity of the Irish people.”

Throughout the 26 Counties there were numerous vigils, reflecting the growing anger of the population, and in the North (as previously mentioned) two people were killed by crown forces in the aftermath of Joe’s death.

More worrying for the British was the continued and growing support abroad.

In the United States there were numerous protests in New York, Philadelphia, Chicago and San Francisco to name but a few. There were also many demonstrations in Australia and New Zealand.

In France, lawyers formed a commission tasked with investigating conditions in the H-Blocks. French parliamentarians wrote to the Inter-Parliamentary Union in Geneva, asking it to take action in support of the two newly-elected H-Blocks TDs, Kieran Doherty (Cavan/Monaghan) and Paddy Agnew (Louth).

In Italy, an incendiary bomb exploded on the roof of the British Consulate and there were protests and demonstrations in Belgium and Portugal. 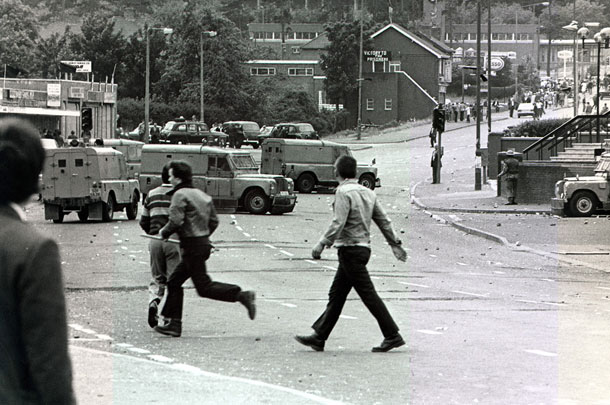 • Rioting in Belfast after the funeral of Volunteer Joe McDonnell