Centenary of the Burning of the Custom House 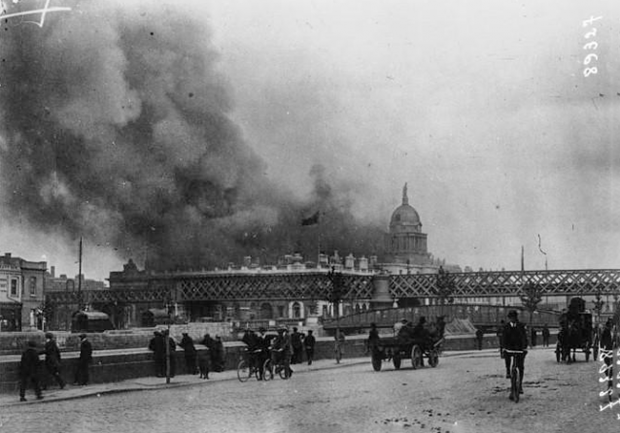 The burning of the Custom House in Dublin on 25 May 1921 was one of the largest operations ever carried out by the IRA. It struck at the centre of British administration in Ireland as the building housed nine separate government departments including tax and local government records. The operation fully achieved its objective, though at a heavy cost to the IRA, and its consequences are still debated today.

The decision to burn the Custom House arose out of a meeting of the IRA Army Council in the home of Nancy O’Rahilly, 40 Herbert Park, Ballsbridge. A republican in her own right, she was the widow of Mícheál Ó Rathaille, The O’Rahilly, who was killed in the 1916 Rising. This historic house was demolished by a developer in September 2020, before the centenary of that historic meeting which was held in January 1921.

It was no ordinary Army Council meeting but was attended by Éamon de Valera as President of the Irish Republic and Minister for Defence Cathal Brugha. Present also were Chief of Staff Dick Mulcahy, Director of Intelligence Michael Collins and others including Liam Mellows, Austin Stack, Seán Russell and the Officer Commanding the Dublin Brigade Oscar Traynor. Recently returned from the United States, de Valera expressed the view that to re-focus international attention on Ireland and to put pressure on the British government, a major military operation in Dublin was required. The choice between an attack on the Auxiliaries headquarters at Beggars Bush barracks or the Custom House was left to Oscar Traynor. 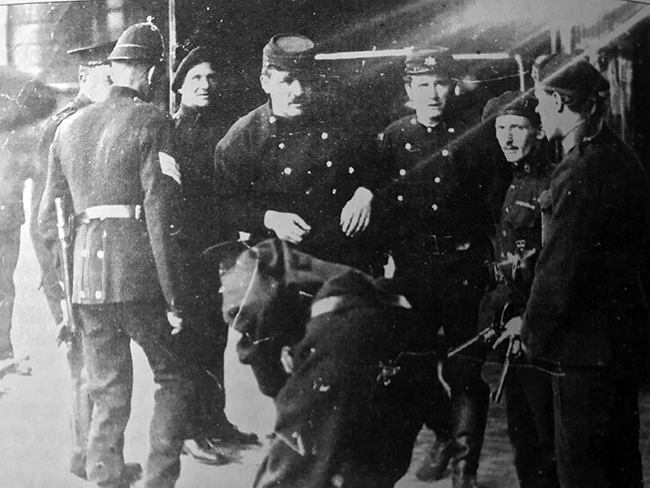 Dublin Fire Brigade and Auxiliaries at the scene. Little did the Auxies know that many of the Fire Brigade men were IRA Volunteers

Traynor ruled out the attack on Beggars Bush as far too hazardous. He chose the Custom House and over the next several months the operation was meticulously planned and was finalised at a meeting in early May. The Custom House was a very large building with three floors and a basement and would require a large force to seize and burn it, as well as forces outside to protect the Volunteers inside. Traynor wanted to have barricades ready to be thrown up near the main British military barracks around the city, with snipers at a safe distance, if there was any sign of a mobilisation of British forces to the Custom House. This aspect of the plan was opposed by Michael Collins and was not carried out.

It has been estimated that around 300 IRA Volunteers were involved in the operation in all its aspects. The Dublin Brigade’s 2nd Battalion which covered the north-east of the city, under Commandant Tom Ennis, was tasked with entering and burning the building. Inside the Custom House also were members of Michael Collins’s intelligence unit ‘The Squad’ and of the Dublin Brigade Active Service Unit. The IRA entered the building as planned at 12.55pm on 25 May with the operation due to last just 25 minutes.

Volunteers spread throughout the building to their allocated floors while civilian workers were ushered into the main hall where they were guarded by the Squad and ASU members. The offices with their wooden furniture and tons of paper files were doused with paraffin. Once this was done the officers were to report to Tom Ennis who would sound a single blast on a whistle to order the fires to be set, with two whistle blasts to signal withdrawal from the building. Somehow, two blasts were heard prematurely, some Volunteers reported that their fires were not set and they had to return to do so. While just a few minutes was lost in this – Traynor estimated not quite five – it was to prove crucial as the British crown forces began to arrive outside the Custom House shortly after the pre-planned IRA withdrawal time, 1.20pm. 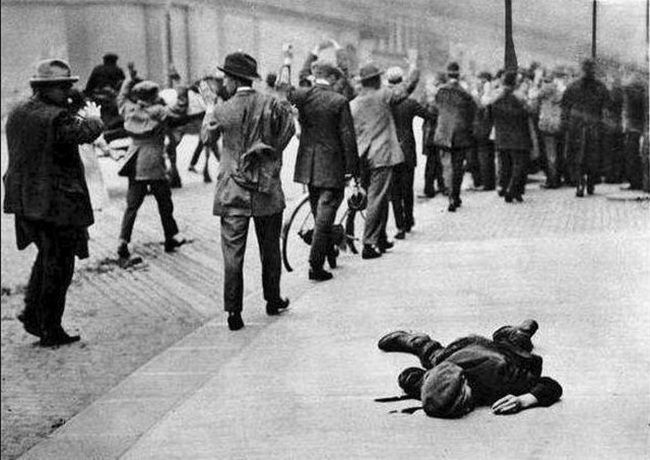 With the Custom House now ablaze, the Volunteers withdrew from the building into a gunfight with British forces in lorries, armoured cars and on foot. At Beresford Place, Volunteer Dan Head, just 17 years old, was taking cover behind the pillar of the railway bridge when he spotted an opportunity. He lobbed a grenade into a British vehicle, causing casualties, but was then shot dead, one of five Volunteers killed. The others were Captain Paddy O’Reilly, his brother Lieutenant Stephen O’Reilly, Volunteer Tommy Dorrins and Volunteer Seán Doyle. Four civilians were also killed in the gun battle. 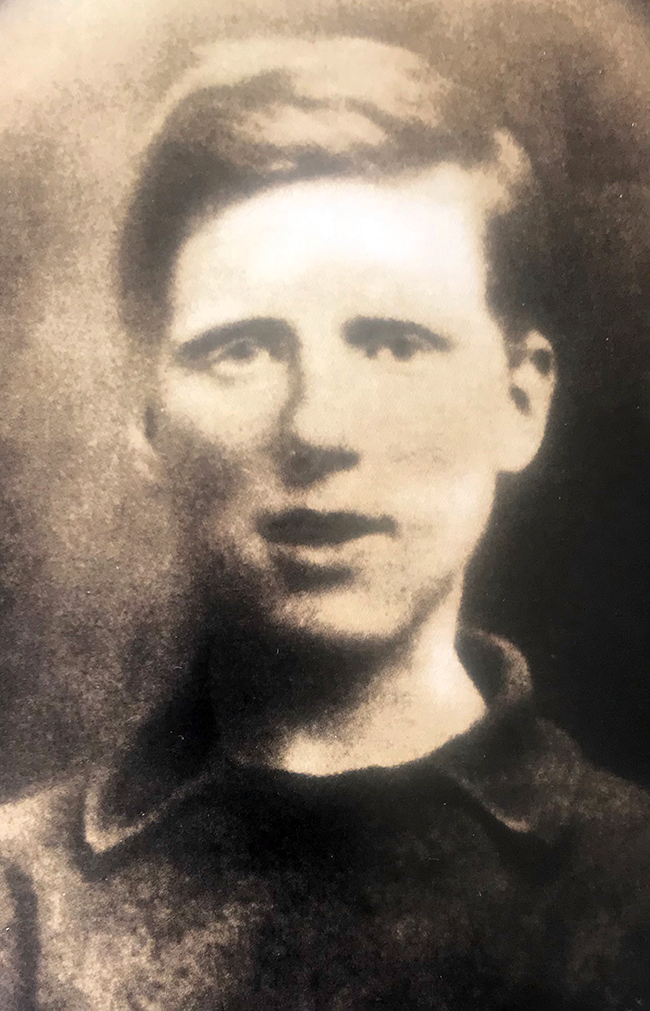 Many Volunteers escaped, including Tom Ennis who was severely wounded, and Oscar Traynor who had witnessed Dan Head’s last moments. But many more were arrested, Traynor estimating 80 Volunteers among over 100 men rounded up by the crown forces. To demonstrate that the IRA’s Dublin Brigade was still in business, attacks on crown forces took place across the city on the night of the 25th. Seán Doyle was dying in the Mater Hospital when he heard the sound of explosions and said to a nurse : “Thank God, sister, the fight goes on.”

A key aspect of the successful burning of the Custom House was the role of the members of the Dublin Fire Brigade who were also members, or active supporters, of the IRA. They provided valuable intelligence as their IRA involvement was not suspected by British forces, they advised on how best to burn the building, they co-operated with the IRA units who were tasked with delaying the departure of fire crews from stations, assisted escaping Volunteers and, when they arrived at the Custom House, they did little to extinguish the fire. In fact some Fire Brigade men who entered the building helped to complete the burning! 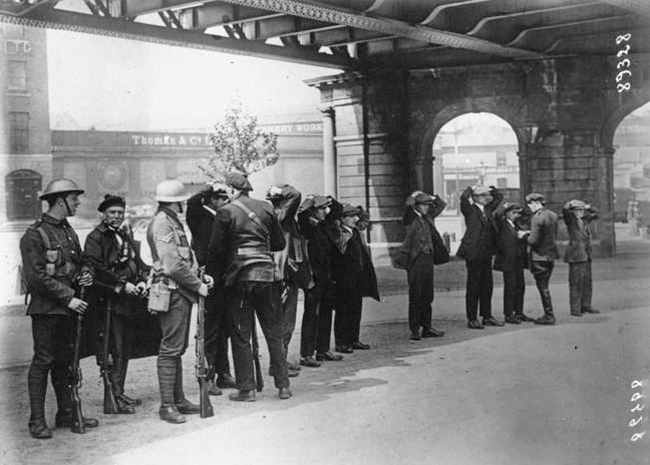 There were a large number of arrests after the IRA operation

There has been much debate about the Custom House operation. Some have argued that it was counter-productive for the IRA because of the deaths of Volunteers and the large number of arrests. It has become embroiled in the endless Dev-Collins debate, with supporters of each taking contrary views. Taking the longer view it can be said that the operation not only achieved its objective of destroying the centre of the British civil administration in Ireland but much more. At the end of the 1920 British Prime Minister Lloyd George had predicted the defeat of the IRA when he said the British “had murder by the throat”. He was shown to be entirely wrong as IRA actions across the country multiplied and reached the scale demonstrated on 25 May 1921. This was not the work of a declining force, nor did the setbacks suffered by the IRA at the Custom House, knock the Dublin Brigade out of the war as some have tried to claim.

Two months after the Custom House attack the British regime had to recognise the IRA as an army when they negotiated a formal bi-lateral military Truce and then entered negotiations with the Government of Dáil Éireann. In guerrilla struggles all over the world where revolutionary armed forces of an oppressed people have had to fight against militarily stronger imperialist forces, the success of the guerrilla army has been in its very survival against the odds, its widespread popular support, its ability to mount operations of all kinds, its resilience despite setbacks and finally its forcing of the imperialists to the negotiating table. Measured in that way the Custom House operation was an outstanding success for the IRA.