The families of ten nationalist civilians shot and killed by the British army in Ballymurphy in August 1971 welcomed the findings of coroner Mrs Justice Siobhan Keegan who declared all of the dead innocent and found that the British army used disproportionate force when killing their loved ones in a series of shootings known as the Ballymurphy Massacre.

However their elation was “stolen” from them by the refusal of British Prime Minster Boris Johnston to apologise directly to the families for the actions of the British state and the British army.

A statement released by 10 Downing Street on Wednesday 12 May, after a meeting involving Michelle O’Neill and Arlene Foster, stated that Johnston had apologised during the meeting, a claim rejected by Sinn Féin.

Mary Lou McDonald met the Ballymurphy families on Thursday and told the media “no apology” was made and “everybody knows you don’t make an apology by proxy”.

Not only did the families reject this, accusing Johnston of being “contemptuous” of them, they also rejected a letter he sent with their solicitor Pádraig Ó Muirigh describing his behaviour as “disgraceful”.

That the British government is considering legislation to give an amnesty to British soldiers who served in the North, as mentioned in Queen Elizabeth’s speech to the British parliament on the day the Ballymurphy verdicts were published, is being negatively interpreted. It presents as another attempt by the British to abandon the Stormont House Agreement, agreed to by all parties in 2014, which provides mechanisms to deal with the legacy of the past.

The series of inquests linked to the Ballymurphy Massacre, found the British government failed in its responsibility to properly investigate the killings at the time. In the case of father of eight, John McKerr, the Coroner found that “this is a significant State failing and an abdication of responsibility”.

The coroner went on to say that it was a “matter of great concern as the court has been hampered in reaching a more definitive finding in relation to the death of an innocent civilian on the streets”.

Indeed the inquest found that the Ministry of Defence (MoD) destroyed lists containing the identities of British soldiers deployed in the area at the time and who “discharged shots” thus hiding the identity of those who were responsible for the deaths of unarmed civilians.

Not only did the British army and MoD not provide the coroner with this information, gathered at the time for the original inquests in what were known as cipher lists, they ensured that those involved in the killings could not be identified resulting in the fact that they couldn’t be traced and subsequently called to give evidence in person.

This scenario, reminiscent of the ‘Conspiracy of Silence’ surrounding the RUC killing of Sammy Devenny in Derry’s Bogside in 1969, gave de facto immunity to the killers.

In the aftermath of the publication of the Drury Report into Devenny’s death the then RUC Chief Constable Arthur Young spoke of “a conspiracy of silence motivated by a misconceived and improper sense of loyalty to their guilty comrades”.

Furthermore James Chichester Clark the then Stormont Prime Minister noted, “some members of the RUC are aware of who the culprits are but, perhaps through a misguided sense of loyalty, as the Chief Constable puts it, are unwilling to co-operate with the authorities to establish the truth”. 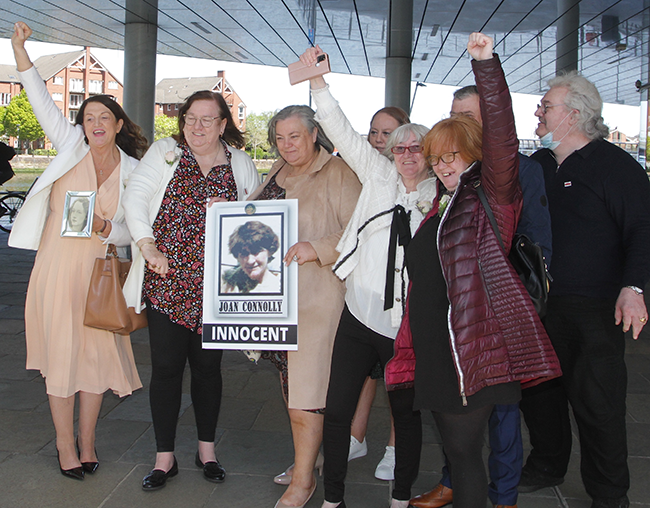 Despite these obstacles the coroner’s findings vindicated the campaign by the relatives of those killed to have the official record of their deaths corrected, stating that they were, according to Relatives for Justice, “innocent victims” who should not have been shot dead.

As the relatives of the families of those killed in the Ballymurphy Massacre gathered at Belfast International Conference Centre (ICC) to hear coroner Justice Siobhan Keegan deliver her findings, it was clear they were anxious as to what the outcome would be. Hope and expectation was high but northern nationalists have too much experience of British justice to be confident of a positive outcome.

However over the course of the next two and a half hours Justice Keegan outlined her findings, gathered over 100 days of evidence from eye-witnesses and expert testimony. She concluded that those who were shot should not have been killed, that their deaths were unjustified and that the British state failed to investigate the deaths in a manner which would have given these families the truth they eventually received 50 years after those tragic events.

The families’ relief at what, for them were positive outcomes, was expressed in muted hand clapping and some hugging during the sitting inside the ICC which substituted for the coroner’s court due to Covid-19 restrictions. The relief erupted into sheer joy as they shook off the formality of the ‘courtroom’ and walked into the sun drenched plaza on the banks of the River Lagan carrying posters of the dead emblazoned with the single word “INNOCENT”.

The backdrop to the Ballymurphy Massacre was, in general, the reaction of the Orange State and its military wing made up of the RUC, British army and loyalist death squads to an assertive nationalist community that stood up and fought back after the pogroms of 1969.

As British soldiers swooped into nationalist districts across the Six Counties, Ballymurphy became the fulcrum of a community’s anger and the state’s reaction.

Loyalist mobs, interspersed with UVF gunmen, invaded Springfield Park attacking houses and driving the residents from their homes towards the Moyard estate.

It was in this area that Father Hugh Mullan and Frank Quinn were killed. They had gone to the aid of Bobby Clarke who was helping evacuate besieged families when he was shot and wounded by members of the British parachute regiment who were deployed to the area.

While acknowledging that IRA Volunteers may have been operating in the area at the time the coroner ruled that both Fr Mullan and Frank Quinn were killed by British rifle fire. Keegan found that their deaths were “disproportionate”, that the killers did not adhere to the Yellow Card rules of engagement and there was a “violation” the of Article 2 right to life of the European Court of Human Rights as the shootings “occurred without minimisation of risk”.

In Incident 2, (the coroner broke the series of killings into 5 incidents with the killing of Fr Mullan and Frank Quinn being Incident 1), Joan Connolly, Danny Teggart, Noel Phillips and Joseph Murphy were all shot in The Manse Field directly across from the Henry Taggart Memorial Hall, the Paratroopers main billet on the Springfield Road.

All four were left lying in the field, denied medical treatment, until eventually a British armoured car arrived. The fatally wounded were dumped into the vehicle, driven to the Henry Taggart where “brutality was displayed towards the injured and dying” stated the coroner.

As well as findings similar to those in Incident 1 the added element to Joan Connolly’s death was that the coroner found she “died as a result of gunshot wounds to the face and right thigh and as a result of blood loss from these wounds”. Keeegan added that “there was a basic inhumanity associated with leaving Mrs Connolly in the field for so long”, which the family believe contributed to her death.

In respect of Noel Phillips, local people always maintained the officer in charge of the detachment that went into the Manse Field to recover the wounded summarily executed him.

The evidence of three pathologists backs these claims as they all agreed in a joint statement that “the gunshot wounds to either side of the neck did not occur whilst he was standing upright, and potentially instead whilst lying on the ground”.

Father of 13 Danny Teggart was shot up to 14 times whilst in the Manse Field and when his body was brought to the base paratroopers planted 38 rounds of ammunition on him.

A medic who tended to him told the inquest that others told him to plant the ammunition but he refused to do so.

The fourth to be shot here was Joseph Murphy. Whilst hit in the leg with a single British issue SLR bullet he developed septicaemia which infected his blood stream and eventually killed him.

As with others taken into custody it was believed he was subjected to severe physical brutality which accelerated his death on 22 August, 13 days after he was wounded.

30 year old Eddie Doherty was killed in Incident 3 on the Whiterock Road as he made his way home. He was hit with a single shot to the chest after Soldier M3 opened fire and emptied a 30 round magazine of a Sterling submachine into the crowd at the barricade he, M3, was trying to clear.

The coroner ruled that Soldier M3 fired in a way that was disproportionate and not in line with Yellow card rules. She was clear that Eddie Doherty “was not acting in a manner that could reasonably be perceived as a threat of death or injury to M3”. 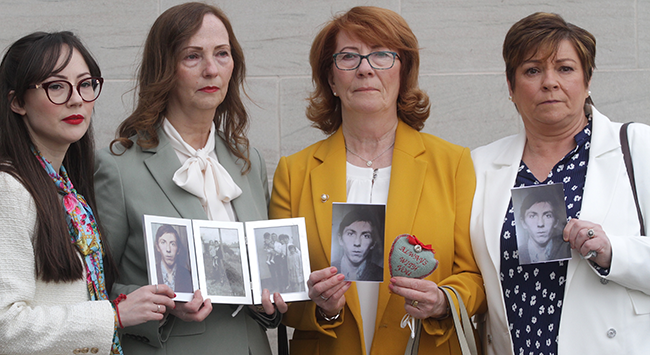 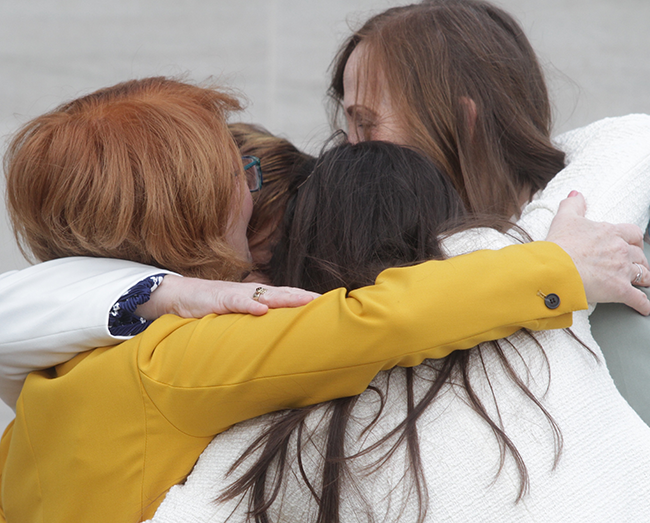 The shooting of Joseph Corr and John Laverty make up Incident 4. According to pathology reports both men were shot in the back while either “crouching, kneeling, crawling or lying positions”.

In her verdict, Justice Keegan acknowledged that both men were on the streets due to the fear the area was being invaded by loyalist gangs but that there was “no justification” for Parachute Regiment soldiers firing on them as they were “posing no threat”.

As stated above the death of John McKerr, Incident 5, proved difficult for the coroner, as there was not an adequate investigation at the time.

When referring the case for the present inquest the Attorney General cited the fact that in the original 1972 inquest the RUC said ‘Mr McKerr was shot by a sniper’.

And despite the presence of British soldiers in the vicinity “no enquiries were made with military personnel” nor were there any statements from military witnesses in the coroner’s file.

The Attorney General added “there is therefore no evidence that the possibility that Mr McKerr was killed by military personnel was seriously contemplated much less properly investigated”.

Paddy McCarthy who was brutalised by the Paras on August 10 died of a heart attack. Always regarded as the 11th victim of the Ballymurphy Massacre his case was not included in the latest inquest as it had already been dealt with in a 1972 inquest. 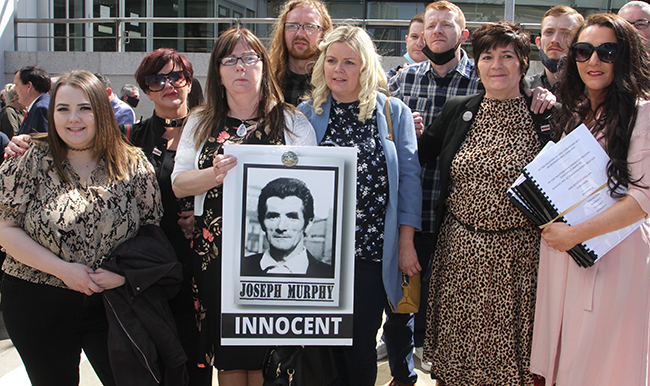