The system has failed victims’ families 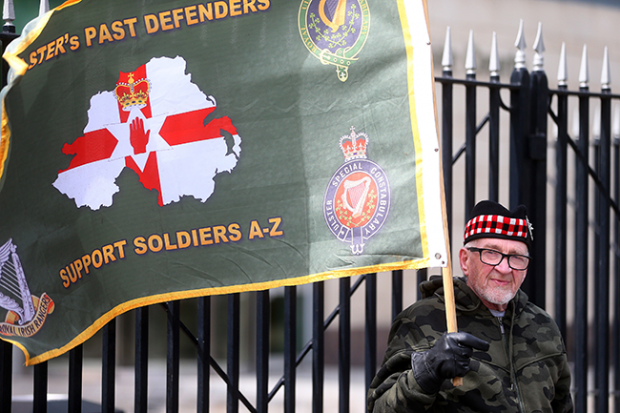 • Supporters of British soldiers outside court

The collapse of the trial of two British soldiers charged with the May 1972 killing of Official IRA Volunteer Joe McCann has sent a wave of anger across the Nationalist community in the North with McCann’s daughter Áine saying “the RUC failed, the criminal justice system failed”.

Paratroopers identified as ‘Soldiers A and C’ walked free from Belfast Crown Court on Tuesday 4 May after a judge dismissed as inadmissible statements the pair made to the now defunct Historical Enquiries Team (HET) in 2010.

In an angry response to the acquittal the human rights NGO Relatives for Justice (RFJ), which advocates on behalf of families of people killed by state and pro-state forces said, “such an appalling injustice is an indictment of the PSNI not to mention a demonstration of their disrespect and disregard for victims of state violence”.

Reacting to the verdict Sinn Féin MLA Linda Dillon, the party’s spokesperson on legacy issues slammed the PSNI over its failure to question the suspected killers under caution, a failure which lead directly to the collapse of the trial.

“I note with concern the collapse of the trial of former British soldiers for the murder of Joe McCann and share the disappointment of the McCann family.

“I also share the family’s concerns at the way in which the investigation was conducted and the failure of the PSNI to interview the soldiers charged after the case was referred to them.

“Sinn Féin will continue to support the family as they discuss their next move in their campaign for truth and justice.

“This ruling highlights the need for the implementation of already agreed mechanisms to deal with the legacy of the past in a human rights compliant manner.”

Given that the British government is now proposing legislation to effectively given an amnesty to British soldiers who served in the North during Operation Banner nationalists fear families will never get justice for their loved ones.

The case against ‘Soldiers A and C’ hinged on statements they made in 1972 under what is known as the “tea and sandwiches” agreement. This meant British army personnel would be subject to an internal Royal Military Police (RMP) interview with ‘tea and sandwiches’ rather than an investigation by the RUC.

The two paratroopers were subsequently interviewed by the now discredited HET in 2010 when they acknowledged that they made the statements about the shooting of McCann in 1972.

However as the HET interviews were not conducted under caution and the paratroopers were not informed they were being interviewed on suspicion of ‘murder’ their statements, the central plank of the prosecution case against them, were ruled inadmissible.

Indeed according to the McCann family “that they were not arrested by the HET, as has happened to many here, but were permitted to attend by arrangement at their solicitors office instead, has ironically since been relied on by them to exclude their interviews”.

Notwithstanding this the HET found, in 2013, that McCann’s killing was unjustified leading the PPS to charge ‘Soldiers A and C’ with murder in 2016.

Also under attack for it’s failure in the case was the PSNI. Justice O’Hara, the presiding judge, questioned why the PSNI failed to conduct a fresh investigation and interview the former parachute regiment soldiers for murder and under caution.

Solicitor Niall Murphy, acting for the McCann family indicated afterwards that the family will now push the Attorney General to open an inquest into the circumstances surrounding the killing saying, “this ruling does not acquit the state of murder. This ruling does not mean that Joe McCann was not murdered by the British army. He was shot in the back whilst unarmed”.