"The common environmental, economic, and health priorities facing our planet and global population are greater than any ideological or political differences. The resolve of the international community must be to end economic warfare, blockades, and conflict" - Declan Kearney

There were many historical resonances associated with the recent 8th Congress of Cuba's ruling Communist Party (PCC) in Havana.

This event marked the 60th anniversary when the socialist character of the Cuban revolution was announced.

It also overlapped with the 60th anniversary of the Bay of Pigs invasion on 17 April 1961, when the USA attempted to orchestrate a counter revolution with trained mercenaries.

The invasion was repulsed under the direct command of Fidel Castro, Che Guevara, Raúl Castro, and other senior commanders. This group had led the national liberation struggle from the beginning; during the Battle of Moncada on 26th July 1953, and later in December 1956, when 82 guerrilla fighters were landed by the Granma on the shores of Cuba, having sailed from Mexico. From that point a sustained armed struggle began, which led to the defeat of the Batista dictatorship. 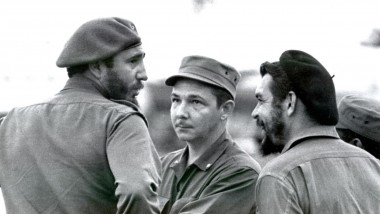 But the 8th Party Congress was notable for another reason. It represented a transition in overall leadership from the 'historic generation' to a younger leadership cadre.

Raúl Castro has been the most prominent, surviving member of that generation since Fidel stepped down initially as President of Cuba, and then as First Secretary of the PCC in 2011.

Two other veterans from the start of the Revolution joined him in retirement from the Party's core leadership group - José Ramón Machado Ventura and Ramiro Valdés Menendez.

It was a watershed moment, as the last of the senior leaders from the national liberation era, and who introduced the socialist phase of the Revolution, stepped aside.

But the theme of the Congress, 'Unity and Continuity' was also apt.

Those charged with leading the Cuban party of government may well be younger, but they are firmly rooted in the tradition of Jose Marti, Fidel, Che, and now Raúl.

That point was underlined by Miguel Díaz-Canel, the serving President of the Republic, and who was elected as the Party's new First Secretary, by his hashtag #SomosContinuidad - 'we are the continuity'.

This Congress arguably ended another era in Cuba's revolutionary history, but it gave way to the emergence of a new leadership which now rests upon the shoulders of previous revolutionary giants.

Continuity with international solidarity between Cuba and freedom loving peoples and democrats will be a consistent hallmark as the Revolution proceeds into the future.

The mutual links between Irish republicans, and other progressives in Ireland, and Cuba are historic and enduring. There are deep connections between our two countries. 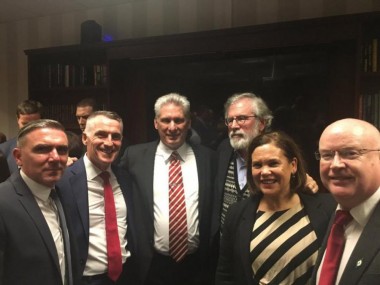 This fact was symbolised by the first state visit of a Cuban President to Ireland in October 2019, when Ireland's President Michael D Higgins hosted Miguel Díaz-Canel.

During this visit myself, Conor Keenan, Gerry Adams, Mary Lou Mc Donald, and Paul Gavan had the privilege of meeting with him at the invitation of our good friend, Cuban Ambassador Hugo Ramos. Richard, Eric and Niall also came along. Gerry had previously met Fidel. Incidentally Hugo had also worked directly with him.

During the 1981 Hunger Strike, this time 40 years ago, the Republic of Cuba supported republican POW's resistance against Britain's attempt to criminalise the Irish liberation struggle.

"In my opinion, Irish patriots are writing one of the most heroic chapters in human history.

They have earned the respect and admiration of the world, and likewise they deserve its support.

Let tyrants tremble before men who are capable of dying for their ideals, after 60 days on hunger strike." 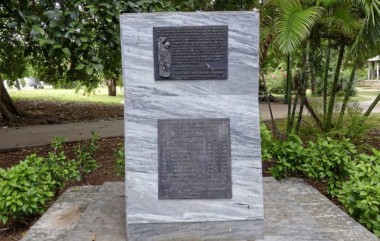 Throughout the Covid-19 pandemic the Cuban people and Henry Reeves International Medical Brigades have been an inspiration to humanity with their commitment to support other countries in their battle against this deadly virus.

Even before the pandemic began Cuban doctors and health professionals were already providing medical support in 59 countries. During 2020/21, 57 Henry Reeve Brigades, encompassing 100's of specialist medical personnel have travelled to 40 countries, including Italy, Andorra, South Africa, Kenya, Kuwait, and Mexico, to assist in their fight back against Covid-19.

The Cubans provide this solidarity and ask for nothing in return, because they believe in global solidarity, and possess a genuine commitment to make our world a better place for everyone. They are instinctively multilateralist and progressive internationalists. 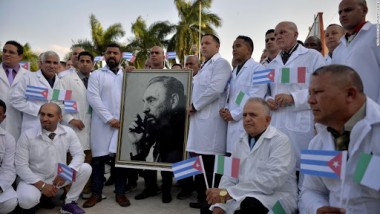 That's why, when others in the international community chose to ignore the injustice of apartheid in South Africa, or British state repression in Ireland, Cuba stepped up. And they have done so repeatedly, because it was the right thing to do, despite ongoing attempts to destabilise their economy and government.

It is a travesty of international law and democratic norms that since before even the Bay of Pigs invasion, successive US administrations have acted against the Republic of Cuba, including many attempts to assassinate Fidel Castro.

At the same time as the US conspired to militarily destabilise the Republic of Cuba, it introduced a form of economic warfare, by imposing an economic and financial blockade.

The impact of America's blockade against Cuba has been made worse since the collapse of the USSR, and in more recent years, as a consequence of the US sponsored financial and economic sanctions against Venezuela.

However, the potential for historic change in US and Cuban relations emerged due to a mould breaking US foreign policy initiative in 2015, when President Barack Obama authorised a process of back channel negotiations, led by a key White House official Ben Rhodes, and a high level Cuban delegation.

This process, which was facilitated by Vatican envoys authorised by Pope Francis himself, culminated in a remarkable agreement between the US and Cuba on the release of prisoners, including the 'Cuban 5', a normalising of diplomatic relations, deeper business links between the US and Cuba, and law enforcement cooperation. 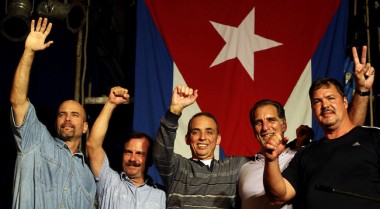 Families were reunited. For a period, free travel between both countries was reinstated, and the Cuban economy was given breathing space.

Ben Rhodes tells the story well in his book, 'The World As It Is'.

Then almost as soon as the Trump administration took power in the US, these positive changes were reversed, and this landmark political and diplomatic detente was ended.

The direct, immediate consequences were severe.

The Cuban government reported that between April 2019 and March 2020, its economy lost $5 billion in potential trade due to the blockade. It is estimated that over the last six decades Cuba has lost the equivalent of $144 billion because of this embargo. During 2020, the island's economy contracted by 11%.

Despite these pressures and notwithstanding the impact of the pandemic, Cuba has continued to prioritise its world class public health service. It is now trialling two potential vaccines, and the Henry Reeves revolutionary doctors continue to be deployed to work among the world's poorest people.

The challenges facing Cuba's embattled economy were discussed at the Havana Congress, with a focus on how to improve state enterprises, and innovations to meet the needs and aspirations of citizens. The Minister of Economy and Planning Alejandro Gil pointed to the need for greater efficiency in the state enterprise system, the extension of self employment, and expansion of cooperatives.

Then in a spiteful decision before he left office in January 2021, President Trump put Cuba on the US government's 'state sponsors of terrorism' list. Over 70 US legislators subsequently appealed to President Biden to rescind that decision. 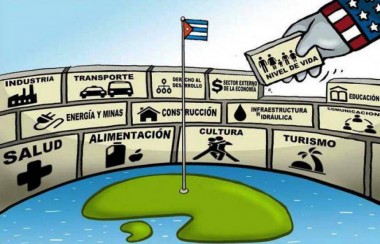 The continuing US blockade of Cuba is unjust and unjustifiable. Cuba has never threatened America.

From 1992 onwards, the United Nations General Assembly has voted overwhelmingly for the US to end its policy of economic aggression.

I was finishing Ben Rhode's book as the Havana Congress drew to a close.

In a cameo moment he described having dinner with Raúl Castro during his last trip to Cuba in January 2017, for the purpose of locking in as much progress as possible before Trump's inauguration. Rhodes asked Raúl whether Cuba would have made itself America's enemy, and the Soviet Union's partner, if America had responded differently to the Revolution. "We would not," Raúl said. "We just wanted to survive. It was your choice."

Politics and international relations are all about choices.

America is continuing to make the wrong choice and apply the wrong policies towards Cuba.

The White House Press Secretary said on 16 April that a Cuba policy shift or additional steps, is currently not among President Biden's top foreign policy priorities.

We should hope this position will change, and that the new US President will show the same enlightened and progressive approach towards Cuba as former President Obama. 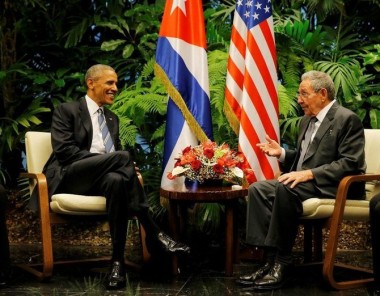 Politics and intergovernmental relations in the Caribbean and across Latin America would benefit from a reinstatement of normalised relations between the USA and Republic of Cuba. It would also send out a positive message to the world about the primacy of, and respect for, international law.

President Diaz-Canel in his address to the PCC Congress said

"Our aspiration is to live in peace and interact with our northern neighbour as we do with the rest of the international community, on the basis of equality and mutual respect, without interference of any kind. We express our willingness to develop friendly, cooperative relations with any country in the world; we are pleased to practice international solidarity even in countries with government ideologies we do not share. We reiterate the determination to expose the truth with clarity, no matter how much this may bother some, to defend principles, join just causes, confront atrocities, as we have confronted foreign aggression, colonialism, racism and apartheid. This is the foundation of our aspirations for the full independence of Our America and of our commitment to help achieve an economically and socially integrated region, capable of defending the commitment of Latin America and the Caribbean as a Zone of Peace." 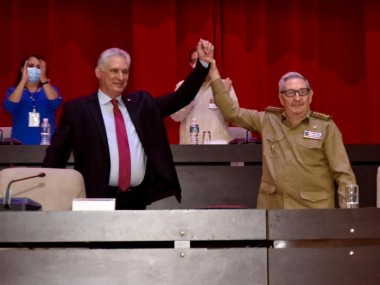 The common environmental, economic, and health priorities facing our planet and global population are greater than any ideological or political differences.

The resolve of the international community must be to end economic warfare, blockades, and conflict.

On 23 June next, the United Nations General Assembly will again consider the resolution to put an end to the US blockade against Cuba. This resolution deserves overwhelming support.

Much better still that this new US Presidency would extend the hand of friendship to its near neighbours in Cuba.

That would be a very significant diplomatic initiative, and an example, with potentially far reaching, positive influence, for how wider international relations should be conducted both now, and in the future.