The untruths in Unionist deprivation and poverty claims 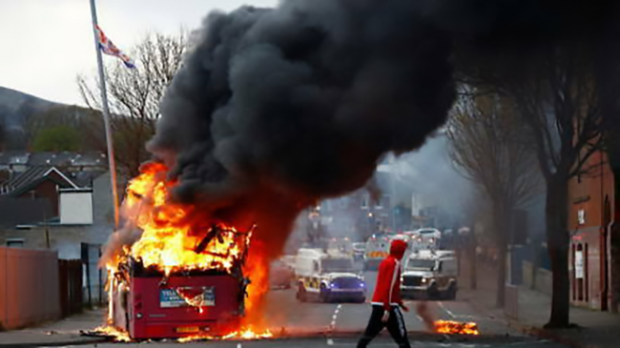 While DUP leader Arlene Foster was accusing republicans of waging a “cultural war” on unionism and heightening tensions again, it has emerged that only for the efforts of Sinn Féin and community activists on the Springfield Road, in West Belfast, a major outbreak of trouble was averted.

As loyalists gathered on the Shankill Road last Wednesday 7 April, youths armed with petrol bombs, cans of petrol and rocks hi-jacked a bus which free-wheeled out of control as it was engulfed in flames and attacked a press photographer before attempting to invade the Nationalist Springfield Road area.

When nationalist youths came on to the streets to counter the loyalists, which in turn lead to confrontation with the PSNI, the intervention of dozens of Sinn Féin politicians lead by the area’s MP Paul Maskey, party activists, community activists and youth workers prevented the disturbances deteriorating into a more serious situation including families being burned out of their homes. 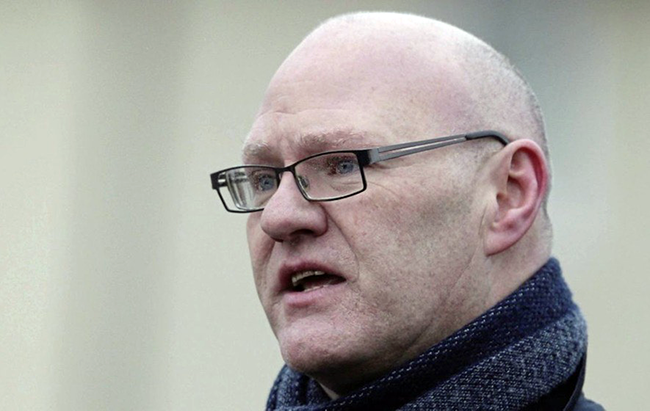 Seán Murray who is chair of the Clonard Residents Association, which includes the Springfield Road interface, said that the “sterling work” of community and political activists who intervened with young people to calm things down prevented things from “getting out of control”.

Murray also criticised the PSNI for not “being proactive” in preventing the incident developing in the first place.

Arlene Foster’s ‘cultural war’ claim was made during the scrutiny committee meeting for the Office of First and Deputy First Minister on Wednesday 14 April. Foster said that republicans are waging a “cultural war” on unionists and denied that unionist political leaders had provoked trouble in the lead up to the rioting in loyalist areas across the North.

Foster’s remarks come at a time when politicians, academics and commentators have raised serious questions over the attempts of political unionism, with the help of unionist commentators and some journalists, to ‘mediasplain’ the recent outbreak of rioting and violence in unionist areas citing a lack of educational underachievement, deprivation, lack of prospects and alienation among young loyalists as driving these, mostly boys and young men, into the arms of ‘paramilitaries’.

These are the same ‘paramilitaries’ the DUP met with, at the end of February, to discuss the ‘protocol, the ‘border in the Irish Sea’ and how to respond to it. 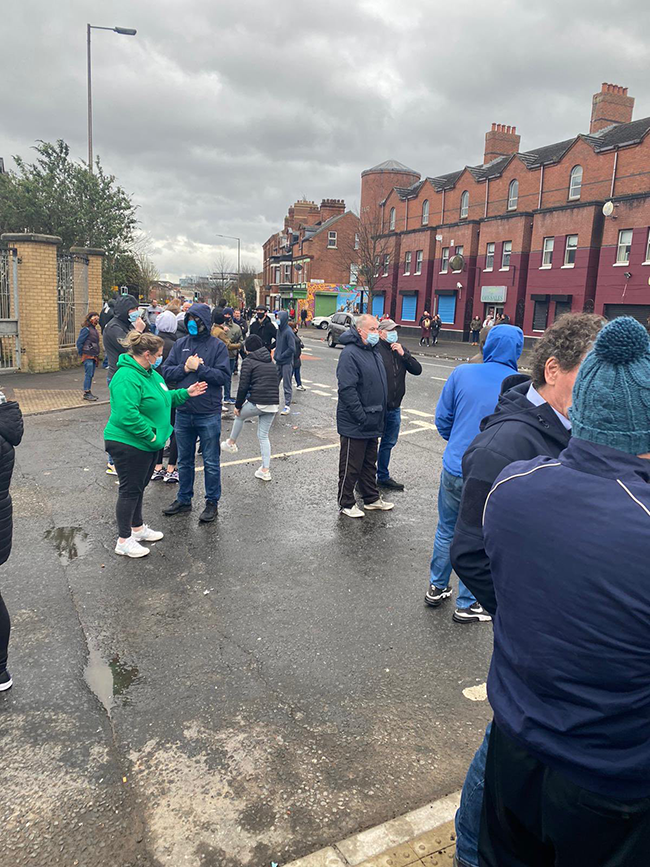 Sinn Féin and community activists on the Springfield Road

Commenting on the figures commentator and primary school headmaster Chris Donnelly said the figures illustrate that, “educational underachievement and the troubles that flow from it are not the preserve of one community”.

Other ‘official’ figures compiled by the ‘Northern Ireland’ Statistics and Research Agency (NISRA) show that predominantly nationalist areas such as Derry and Strabane, North and West Belfast are the most deprived areas of the North.

NISRA’s Multiple Deprivation Measures examine income, employment, health, education and crime and ranks it’s findings across 890 areas of the North with 1 being the most deprived and 890 suffering the least deprivation.

The figures show that 9 of the 10 areas on the Multiple Deprivation Measure list are nationalist areas such as Creggan in Derry, the New Lodge and Ardoyne in North Belfast with the Woodvale area of the Upper Shankill in West Belfast being the only identifiable unionist area.

Statistics for the Education, Skills and Training Deprivation Domain identifies the prevalence of poor educational outcomes for children and low levels of qualifications for working age adults. These show that six Unionist areas, including the Shankill and Woodvale, dominate the list of the 10 worst off areas with nationalist areas of West Belfast also featuring heavily. The New Lodge, however, is the most deprived. 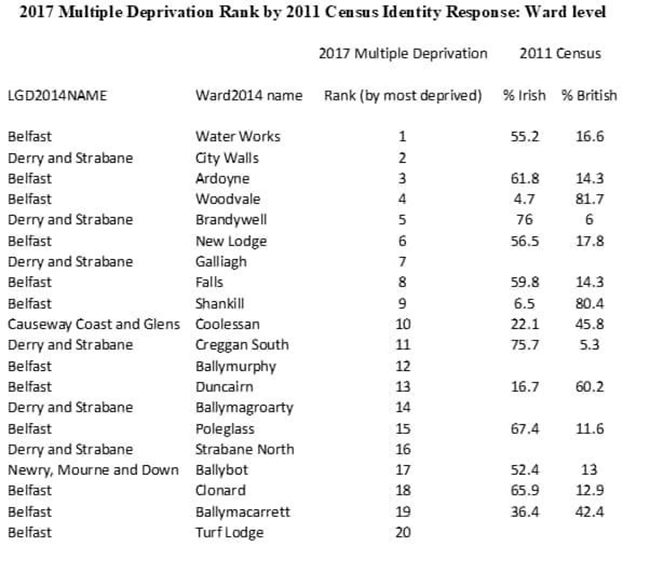 Education expert, Professor Tony Gallagher, makes the point that educational underachievement and deprivation might not of itself provoke people into rioting but “fiery political rhetoric [saying] that all you hold dear is about to be removed or debased” might provide young people with an excuse.

Chris Donnelly, while he acknowledges that deprivation and educational underachievement cuts across both nationalist and unionist communities, maintains that “every piece of objective research confirmed that working class Catholic communities predominate the most deprived areas” and lays the blame for the recent trouble at the door of the unionist leadership.

The failure of political unionism and the DUP in particular to show clear leadership has allowed the UDA and UVF to fill the vacuum, albeit in a way that allows unionism, as we’ve seen down the decades, to exploit loyalist violence to it’s benefit.

So with talk of splits within the Loyalist Communities Council, the umbrella group comprising the UDA, UVF and RHC, as well as speculation that the ‘old’ leaderships of these organisations may be getting shunted to the side and replaced it is clear that unionist parties need to give responsible leadership as the alternative is chaos.