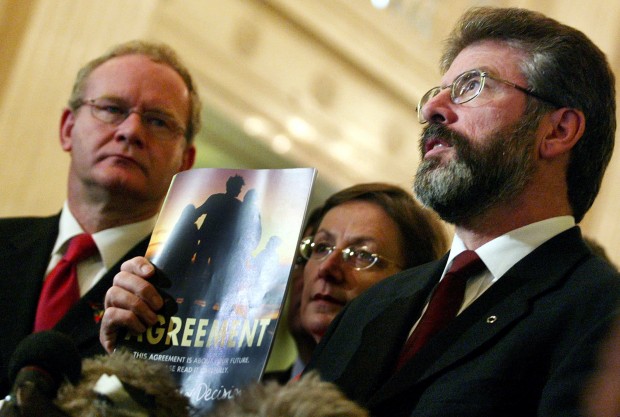 "There is a claim that unionism and loyalism are not being listened to. That is not true. We are being deafened by the constant anger and outrage over every perceived slight. We hear unrealistic and conflicting demands against the background of threats and violence. Anger and frustration are no replacement for dialogue and democracy."

Sometimes it’s the simple questions that are the hardest to answer. During a very frustrating period in the peace process, a long-time Republican activist asked a simple question, “How does it end?”

A simple question. We were so caught up in the frustrations of the day that we were in danger of losing perspective. He then answered his own question. Twenty more years on, I still remember the answer, “through negotiations and politics, it will be painfully slow until we win a majority for Irish Unity”.

I believe that to be true.

The democratic principles are set in the Good Friday Agreement and endorsed by the people. The only way to resolve political differences is by peaceful and democratic means, free from threat.

In 1998 the people voted for the Good Friday Agreement. Their choice was respected. Republicans honoured the agreement and worked the institutions in good faith. Believing in Irish Unity and building for the future. Supporting the institutions and constitutional change is not mutually exclusive. A Unity Referendum and institutions are part of the same Agreement.

I believe passionately in Irish Unity and want to live in a new and united Ireland. There will be a Unity Referendum. The only point for discussion is, when?

The case for Irish Unity is undeniable, but it is not inevitable.  Unity will come when it is the choice of a majority.

If the people vote to maintain the Union with Britain, that democratic choice must be respected.

Instead, we hear claims of vetoes, super majorities and Arlene Foster leaving her home rather than live in a united and shared Ireland.

There is a claim that unionism and loyalism are not being listened to. That is not true. We are being deafened by the constant anger and outrage over every perceived slight. We hear unrealistic and conflicting demands against the background of threats and violence. Anger and frustration are no replacement for dialogue and democracy.

The loyalist parties were part of the Good Friday Agreement negotiations. Since then, these parties have failed to build an electoral base.

The Loyalist Community Council was established in 2015 and illegal paramilitary groups “recommitted” to support the Good Friday Agreement as the “Union was safe”, calling for greater support for working-class unionist communities and a commitment to tackle criminality within loyalism.

In the 2017 Westminster election, the Loyalist Community Council endorsed three DUP candidates and one UUP candidate. Their statement urged,

“every unionist and loyalist voter to ensure they turn out and vote for unionist candidates”, and added, “particularly warns all unionists and loyalists against voting for Alliance party candidates”.

The DUP won their seats and went off to negotiate the hardest possible Brexit with the full endorsement of loyalist paramilitary groups.

Unionism believed that the flag-waving jingoism of the Brexiteers was support for the union when it was about narrow English Nationalism.

Loyalists chose to endorse the DUP as representatives of unionist working-class communities.

Without electoral support loyalist paramilitary groups can only claim to represent their own illegal organisations.

It is still an unanswered question as to why these groups still exist, still organise, still recruit, and still operate in the year 2021.

The same groups are now claiming they have no political representation while endorsing other political parties. Demanding the British Government and EU end the Protocol, withdrawing support from the Good Friday Agreement while claiming the protocol undermines the same agreement.

The poverty experienced in working-class unionist communities is the same as that in Nationalist areas.  The educational achievement levels of working-class unionist is a concern to all because it limits opportunity. Yet it is the DUP that continues to support the regressive 11 Plus, a policy which was abandoned across these islands years ago. It was unionist parties that cheered on the austerity of the Tories including demanding the implementation of welfare cuts.

The inconvenience experienced by the Protocol is felt not only by unionists but all in the north. It is the outworking of Brexit. If your identity is threatened by additional checks on meat products at ports, then there are bigger questions to ask.

It is not that no one is listening. It is hard to hear when conflicting voices are shouting at you.

It not often that I agree with Gregory Campbell of the DUP. But even a broken clock is right twice a day. On the Claire Byrne programme on RTE, he recognized that unionism was now a minority in the north.

At present, unionism is demonstrating the difference between knowledge and wisdom. They know the facts but chose to live in denial rather than have the wisdom to act.

This is to me welcome as the debate is live and will ultimately be up to the people to decide.

There is no automatic majority for the union. There is no veto on change unless unionism can rely on every future British government to ignore the wish of a majority and support a unionist minority regardless.

Their aim of collapsing the Good Friday Agreement Institutions or the Agreement itself will not change the democratic call for constitutional change.

Therein lies the problem for unionism. They are one amongst equals. “We are the people”, now means, “We are all the people”.

The choice is to return to the provisions and principles of the Good Friday Agreement including equality and the democratic right of the people to determine their constitutional future or to deepen the crisis.

Unionism has created this crisis and brought violence onto the streets. Only Unionists can answer the question for unionism, “how does this end?”