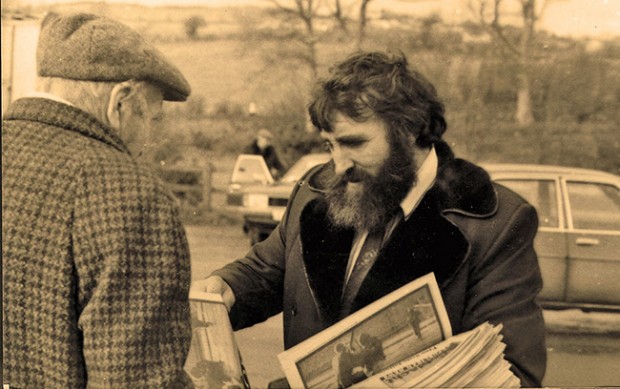 • Sinn Féin Donegal County Councillor Eddie Fullerton selling AP/RN. In the aftermath of his murder his local election posters lay ready for collection in the hallway of 58 Parnell Square

The first copy of An Phoblacht that I bought was the one that reported the death and funeral of Bobby Sands. Four years later I was working in the paper. Five years later again I was editor. I was still in my 20s but how quickly time flew and here I am heading for 60 and wondering where all the time went.

I blame Rita O’Hare. It was she as editor who ‘head-hunted’ me in the summer of 1985 when I answered the call and started work at a desk in Kevin Barry Memorial Hall, 44 Parnell Square. At that time An Phoblacht shared the historic building with Sinn Féin Ard Oifig, the shop and the photography business of veteran republican Cathal Holland.

The paper’s accounts and dispatch department was in the basement and the editorial and production department were on the first floor. Sinn Féin was on the second floor and at the top of the house lived the late Rose O’Brien, whose family had been connected with the building, and with the Republican Movement, since the 1920s. The building was named after Kevin Barry, whose centenary is this year, because his IRA unit used the building for meetings and training.

In my first year as a ‘scribe’ (as Rita called us young journalists) I interviewed a man who had done weapons training with the IRA in the back yard of 44. He was the late Bob Doyle who lost an eye fighting the Blueshirts on Dublin streets and went to Spain to fight for the Republic against Franco. And a man who was sentenced to death in Belfast in 1942 but reprieved had his office in the basement – the legendary Joe Cahill, comrade of Tom Williams, who looked after Sinn Féin finances. So for someone like me with a passion for Irish history I was, as the old Dublin saying goes, “in my alley”.

I am writing this on a laptop, it will be sent by email, edited and laid out on screen before the completed edition of the magazine is sent to the printers at the touch of a key, ready for printing. It is a world away from the arduous and physical process by which we produced the paper in the ‘80s and early ‘90s. 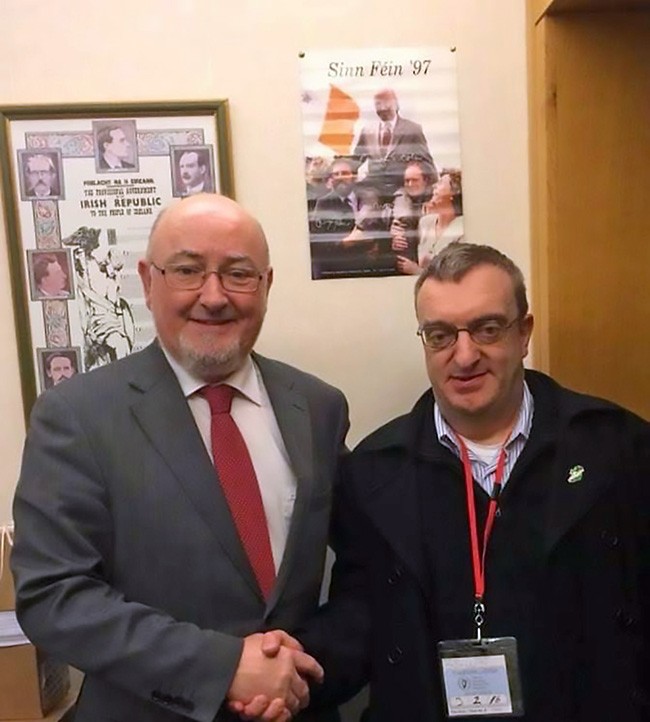 When I started I didn’t even have a typewriter. I wrote my articles in longhand on an A4 pad which was then typed up by one of the two typesetters. It took them a while to get used to my scrawl. The typed pieces then had to be ‘pasted up’ - actually glued to a page - in columns, to which headlines and photographs were added. There were special machines for making headlines and a huge camera to copy and reduce or enlarge the photos. These came from our own photographer’s darkroom or from photo agencies. All this required a sizeable staff on the journalistic and production side, including sub-editors and proof-readers who ensured that the paper was free of errors.

There was a great team spirit in the paper which we just saw as an extension of wider republican comradeship at that time of struggle and frequent tragedy for republicans and for all involved in the conflict. Of course our staff comrades in the Six Counties were on the front line and especially our drivers who delivered the paper directly to republican sellers and to shops locally at great risk. Even in the worst of times we never missed an edition and the drivers always ensured that the paper got through.

All the efforts of our enemies to thwart us drove us on. The censorship of Sinn Féin on both sides of the Border and the murder of Sinn Féin activists were two sides of the one coin, something that had become very clear by the time I took over as editor in 1990. By then we had moved from 44 to our own building in 58 Parnell Square. I will never forget May 1991 and hearing of the murder in his own home, by British agents, of Sinn Féin Donegal County Councillor Eddie Fullerton, and seeing Eddie’s local election posters ready for collection in the hallway of 58.

The depth of political censorship and attempted isolation of republicans at that time is hard to fully comprehend today. Not only Sinn Féin members but anyone with a republican outlook was banned from the broadcast media on both sides of the Border.

That made the work of An Phoblacht hugely important and a mighty effort went into producing it and thousands of Sinn Féin members and others, at home and overseas, sold it in their communities, week in, week out. In so doing they helped to build a republican political base and network that endures to this day. In my work as a City Councillor I still meet people who recall that they first met me “as a young fella” selling An Phoblacht around the pubs of North East Dublin.

The importance of An Phoblacht at the time in sending out the republican message cannot be over-estimated. We helped to rally wider opinion, not necessarily all Sinn Féin supporters, who nonetheless were alienated and disenfranchised by the political and media establishment in the 26 Counties who had turned their backs on the people of the Six Counties and who had tried to undermine and denigrate the struggle for Irish unity and independence, be it in 1916 or 1991. 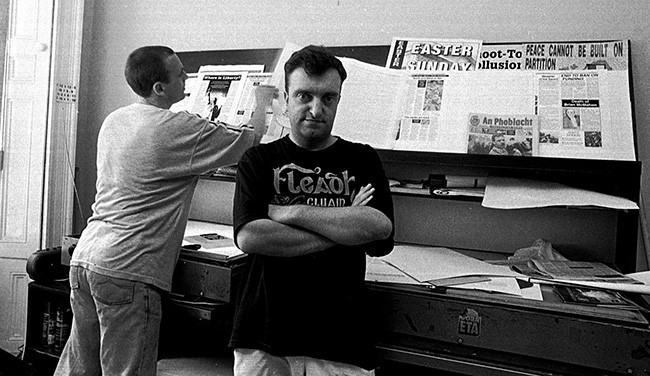 I had the privilege of being editor 1990-1996 as the Peace Process developed, the making of history before our eyes. Again, the paper played a pivotal role in keeping republicans informed and engaged, with extensive reports, debates and discussion of strategy as a new era slowly took shape. It was vital in maintaining unity at a time of great change. As always we were rooted in republican ideas and republican history, applying progressive politics to current events and expanding coverage to all aspects of social, economic and cultural life. When Sinn Féin made the breakthrough in 1997 and got our first participating TD elected to Leinster House, both the new TD Caoimhghín Ó Caoláin, former general manager of the paper, and myself, his Parliamentary Assistant, and former editor, knew we were carrying the banner of An Phoblacht into the corridors of power.

Today ‘the paper’ continues online and in magazine format and An Phoblacht archives remain as a huge resource for our ongoing struggle, for the battle of ideas and for helping to shape the future.

As you go back through those pages of 50 years you will see many who lost their lives in the struggle, and An Phoblacht preserves their memory and their legacy and their message. Compared to their sacrifice our own efforts seem little enough, but whatever the contribution made over those decades, no matter how small or great the part we have played, as Bobby Sands urged us, it was and is all for the same objective – for the Republic, ar son na Poblachta.