The best political weekly in Europe 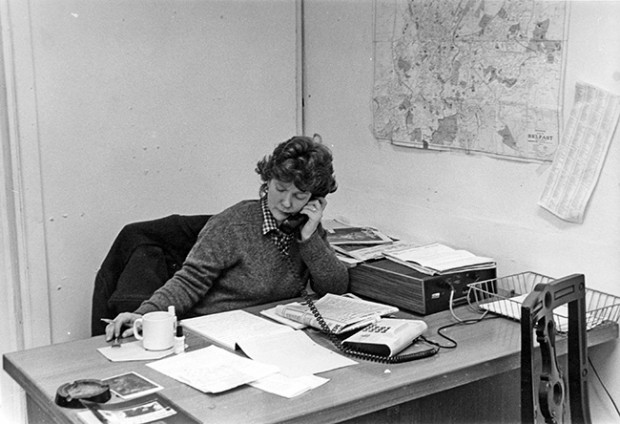 • Rita O’Hare, in the old editor’s office in 44 Parnell Square

My years as editor of AP/RN began in January 1985 after the sudden death of Mick Timothy.

We carried the account of his funeral and Danny Morrison’s eulogy in that week’s edition. Mick’s photo was on the front page.

I wrote then “That Mick Timothy will be missed, that the many positions of responsibility he held will be difficult to fill is an understatement. The loss to the Republican Movement is immeasurable and will become more evident when the shock of his death eases.”

We went from his graveside to 44 Parnell Square. It was Wednesday, deadline day. The paper was published Thursday. The proofs had to get to the printers on time. The paper was crucial, particularly in a time of censorship, a hostile media, and the propaganda of both British and Irish Governments.

We never missed a deadline. Remember, no computers then. No email. No mobile phones. We met Fridays to plan content for the next week. Consult with the northern editor, decide on the editorial and front page.

The hardest working of all, the artists and layout people and typesetters arrived Tuesday and worked through Wednesday till the paper was ready. We often worked all through the night. We did everything except print it.

These are my memories of those years.

The first paper of February carried the headline ‘IRA Call the Shots’. It came from a media story about John Hume saying that he would speak to the IRA rather than Sinn Féin. A poster was made from it and, years later, it was used to convict a young Sinn Féin member from Cork of membership of the IRA.

February brought news of a conference in New York, organised by the City Comptroller Harrison Goldin. He raised the issue of discrimination in employment in the north of Ireland. This became the McBride Principles campaign. It was fiercely opposed by both British and Irish governments and by the SDLP.

The deaths of IRA Volunteers, Diplock courts, prisoners, the show trials, extradition, and the sectarian murders by loyalists acting with impunity filled the pages of the paper.

48 Volunteers died in those years. We carried obituaries for them all and accounts of their funerals. Most of them were so young, yet they gave their lives to that struggle for freedom.

We carried all the social issues of the day that affected people all over Ireland. Housing, health, homelessness, women’s rights, unemployment, gay rights, emigration, discrimination.

The front page of May 9, ‘The Writing on the Wall’, is a photo of a young soldier, hunkered down, his rifle at the ready. The single word NO on the wall above him. Brian found the poem Letter to a British Soldier on Irish Soil by Patrick Galvin, which captured that moment. And the layout perfectly conveyed the starkness and sadness of it.

Sinn Féin won 59 seats in the north’s local government elections that May, facing the bigotry and violent attacks of Unionist councillors who tried to silence them.

A frontpage photograph in June shows Magherafelt Councillor John Davey with blood running down his face after an assault by a unionist councillor. John was murdered 4 years later by the UDA. This was what Sinn Féin candidates and Councillors faced. 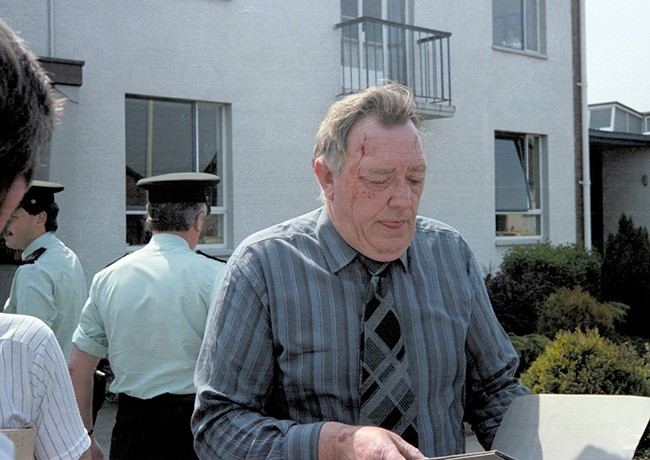 After an assault by a unionist councillor, Sinn Féin councillor John Davey, with blood running down his face outside Magherafelt Council

The Hillsborough Treaty, signed in November 1985, had promised to reform the Orange State. The loyalist day of action on Monday March 3rd 1986 showed how meaningless that was.

The loyalist organisations ordered the closure of work places, shops, and public transport, enforcing them with threats and violent assaults. And the RUC looked on. 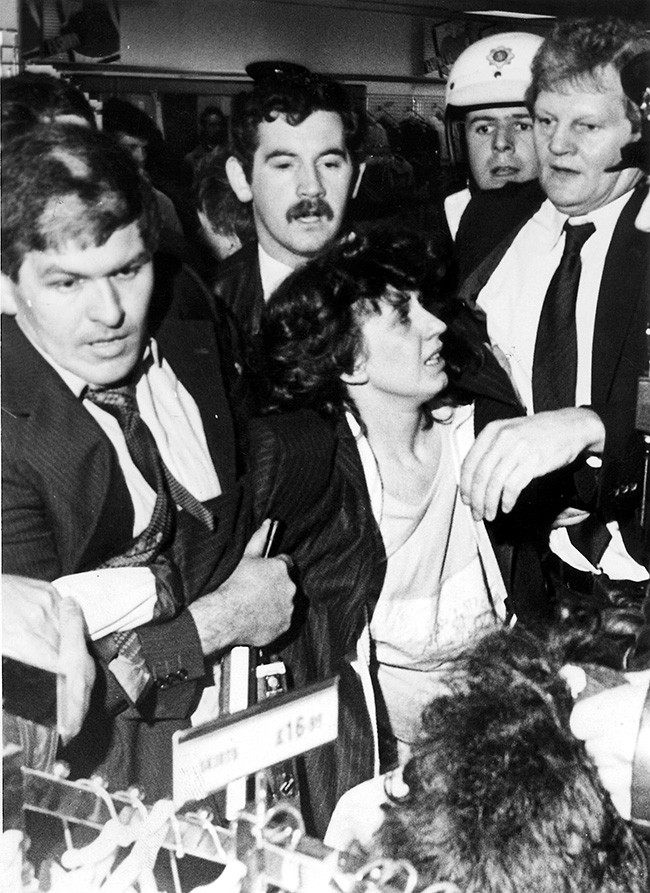 Extradition was highlighted by the dramatic arrest of Eibhlin Glenholmes in Dublin on March 22nd. She was pursued through the streets of Dublin by armed Gardai. It made international news, along with the ongoing extradition cases being fought by H Block escapees Bik McFarlane and Gerry Kelly in the Netherlands.

Joe Doherty, another escapee, was fighting extradition in New York, a case that galvanised Irish-America, and Robert Russell was in Portlaoise prison waiting a judgement on his extradition.

And another show trial opened in Belfast. It was internment via the courts.

The scale of sectarian attacks increased in a widespread campaign of intimidation, targeting Catholic families in Belfast, Derry, and Portadown. There were four sectarian murders in North Belfast by May alone.

Cormac was our cartoonist, original, funny, politically sharp, and cutting. It was what everybody turned to read first. He was brilliant.

I really liked the headline ‘Currie Chickens Out’ over a story about Austin Currie and Ken Maguinness storming out of a meeting in Dublin when Sinn Féin’s Brian McDonald spoke. I can’t remember who came up with that headline, but we got a lot of amusement from it.

The attacks on nationalist and republican communities increased. Homes were raided and wrecked, parents arrested and dragged away, children terrified. These were ordinary people and AP/RN reporters, in particular ‘Maeve Armstrong’ made sure their stories were told with humanity and sensitivity. It was these stories of the endurance of ordinary people in the face of daily harassment and brutality that brought home the reality of life for northern nationalists.

It was policy, designed to break a people’s spirit and force them to turn against us. It did not work. The front page of August said it “The People Stay Strong”.

Sinn Féin’s big political debate of the year was on the policy of not taking seats in the Dáil. At the Ard Fheis, after a long, tense and, at times, emotional day, the motion to change the policy was passed. It was an essential move for Sinn Féin’s relevance in the 26 Counties.

Gerry Adams’ book ‘The Politics of Irish Freedom’ was published in December by Brandon Press. It was a significant work on the right to sovereignty and how it could be won. 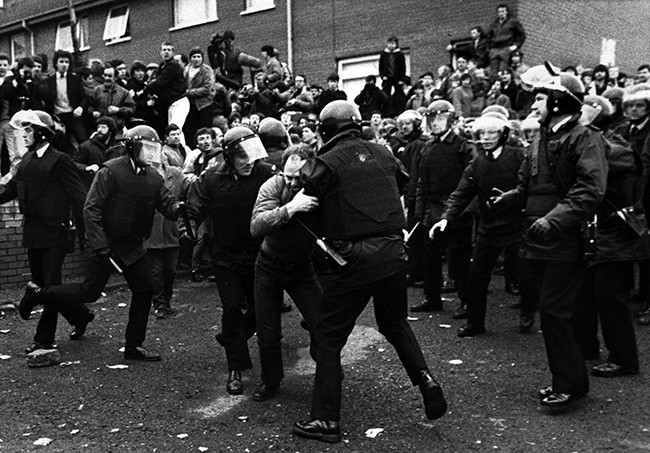 1987 - Larry Marley funeral, the RUC tried to take over the funeral but thousands of people stood in silent solidarity with his family 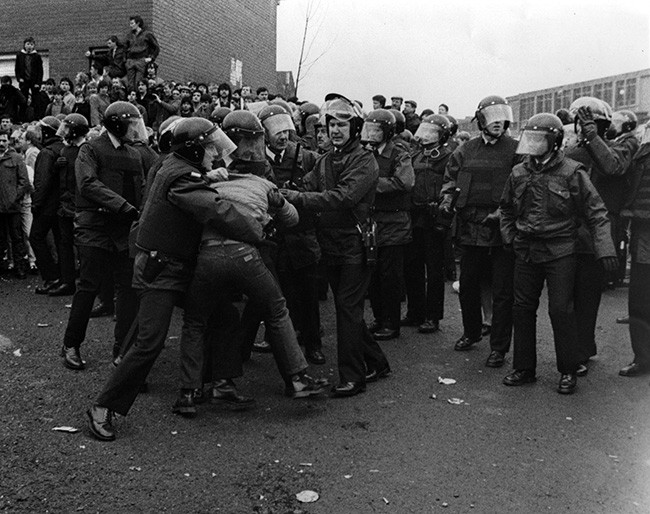 The murder of Larry Marley, shot at his home in Ardoyne on April 2nd, made world news. The RUC surrounded the house, blocking all access. They tried to take over the funeral. The family refused to give in. It lasted for six days. Thousands of people stood in silent solidarity with his wife and young family.

Sinn Féin published ‘Scenario for Peace’ on May 1st. It sought to create the conditions for peace and a negotiated British withdrawal.

The conflict was already at a height when a severe blow came on Friday May 8th. Eight volunteers were killed in an ambush at Loughgall in County Armagh. A civilian also died in the hail of bullets. 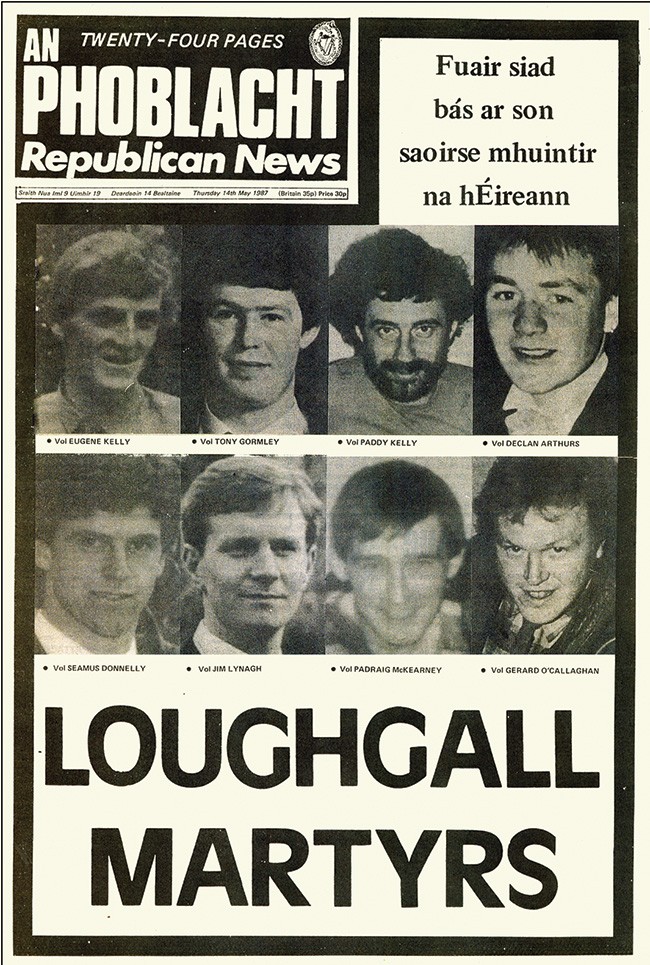 A caption on a photograph of the funeral stated, “Loughgall will become a tombstone for British policy in Ireland and a bloody milestone in the struggle for freedom, justice, and peace.”

Gerry Adams retained his West Belfast seat with an increased mandate in the Westminster elections.

The British Army began blocking border roads in July. People came from all over the country to reopen these country roads, essential to local farmers and communities.

The IRA statement after a bomb exploded prematurely in Enniskillen on November 8th described it as “catastrophic” and “a monumental error” that should not have happened. 11 people died in the explosion. It was a shocking tragedy.

1987 was a hard and tragic year. 1988 was brutal. It opened with the death on January 15th of Sean McBride, a giant of Irish and international politics and a proud republican. It closed with the death on December 8th of another republican legend, John Joe McGirl, a Chief of Staff of the IRA and a former Sinn Féin TD for Sligo/Leitrim.

Big changes to AP/RN, not least our move to new premises at 58 Parnell Square. While sorry to leave the historic 44, the new premises gave much needed space to editorial and production staff. The building was named for Mick Timothy, a fitting tribute to someone who contributed so much to the development of the paper and to Sinn Féin strategy.

Jake Mac Siacais joined us as Northern editor when we lost Richard to the Six County Press office.

John Hume had talks with Gerry Adams on January 11th. Unionists were not happy. But it was, in most people’s view, about time. Gerry’s tenacity in getting these talks started eventually led to the negotiations that led to the peace process. 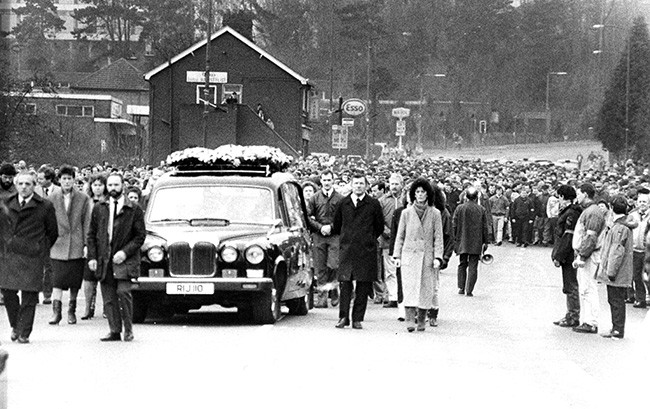 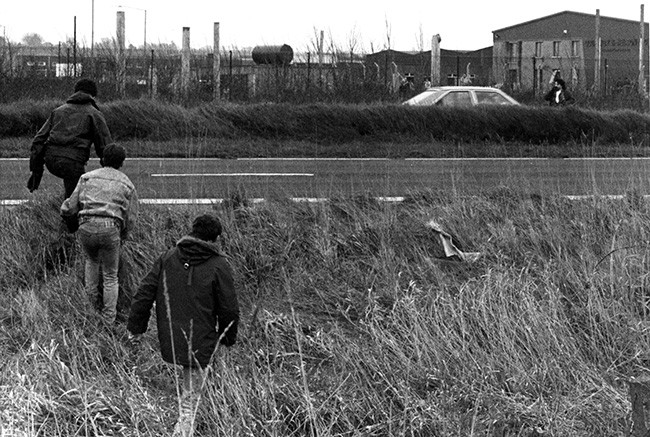 The SAS execution of three Volunteers, Máiréad Farrell, Dan McCann, and Sean Savage, in Gibraltar on March 6th shocked and saddened us all.  Three people were murdered by loyalist Michael Stone during their funerals in Milltown Cemetery, one of them Volunteer Kevin Brady. With the deaths of Volunteers Brendan Burns and Brendan Moley in South Armagh the week before and of Kevin McCracken in Belfast, the IRA lost seven Volunteers in as many days.

On Wednesday 16th, two undercover British soldiers drove into the funeral of Volunteer Kevin Brady who was killed in the cemetery. The crowd saw it as another attack and the two soldiers were caught, disarmed, and killed. It was 10 days of unimaginable horror.

The British Government imposed censorship and members and supporters of Sinn Féin were banned from TV and Radio in the North and Britain.

An IRA interview in early January spoke of the steps it had taken to avoid civilian casualties and the mistakes that had caused them. It made a strong point of the IRA’s support for Sinn Féin’s efforts in building a political movement north and south.

A young Tyrone Volunteer was killed in February. He was the same age as the British soldier killed by the IRA a week earlier, which was noted in the IRA’s statement. Two young lives lost in a war not of their making.

Gerry Adams launched his latest book ‘A Pathway to Peace’ in March, calling for the building of an all-Ireland political movement for national self-determination. It was another contribution to the growing calls for real dialogue about a resolution of the conflict. The resistance by both governments delayed the search for peace for years.

My tenure as editor ended in January 1990. My memories of those times are mostly about what was happening in the north. It was a life or death struggle and the paper was a vital voice for that struggle.

Thanks to all of you who dedicated your considerable talents to “The best political weekly in Europe”. To the writers, to the production teams who typed it, to the artists who designed it and laid it out, to the sub editors, proof readers, columnists, to Cormac, to Pat for Remembering the Past. And to our brave drivers who delivered AP/RN all round Ireland, particularly those who put their lives at risk bringing it to the north, Thank you.