The revolutionary journalism of Mick Timothy 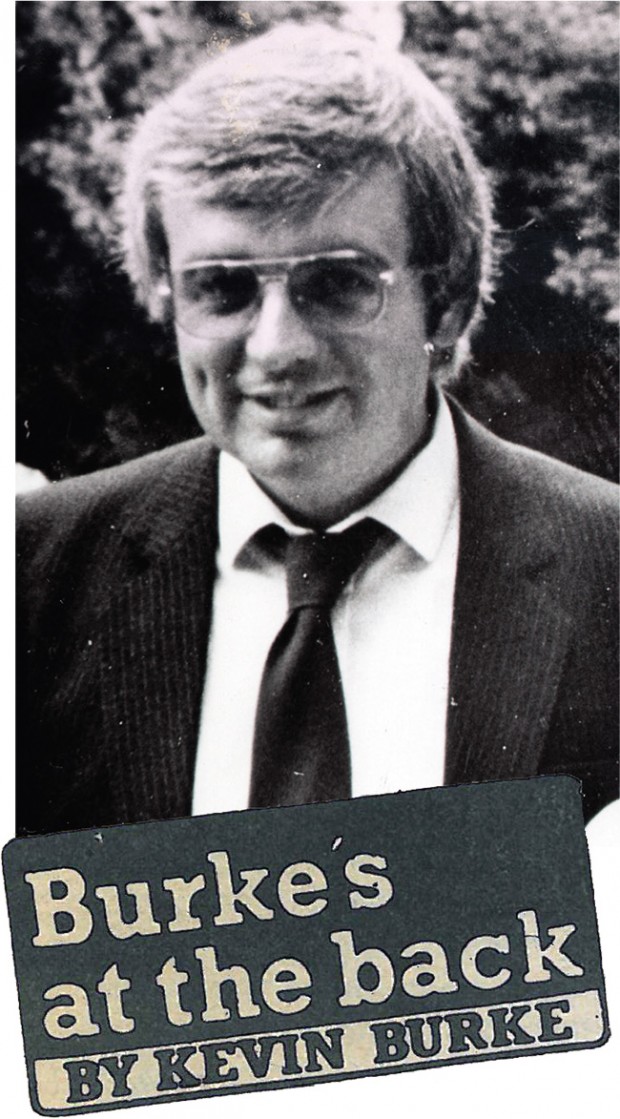 Former AP/RN writer Brian Mac Domhnaill remembers the revolutionary journalism and editorial policies of An Phoblacht editor Mick Timothy. From 1982 to his sudden death in 1985, Timothy revamped and expanded the paper. He directed the focus of An Phoblacht onto an expanded range of key social and economic issues in Ireland and internationally, while chronicling the electoral growth of Sinn Féin and the intensifying IRA campaign.

Mick also ensured a forensic concentration in the pages of An Phoblacht on the British Shoot to kill and collusion strategies as well as the reactionary policies employed by the Fine Gael Labour Coalition of the mid-1980s.

I was approached by Mick Timothy at the Ard Fheis in late October 1982 and asked if I was still interested in joining the staff of An Phoblacht/Republican News.

The front page of the paper being sold at that Ard Fheis proclaimed Danny Morrison as one of five Sinn Féin candidates elected to the then Stormont Assembly. With Danny’s election, Mick Timothy succeeded him as editor. The larger than life and apparently gruff Mancunian was already working with the paper, but now he had the responsibility for driving it forward, broadening its coverage and its appeal. 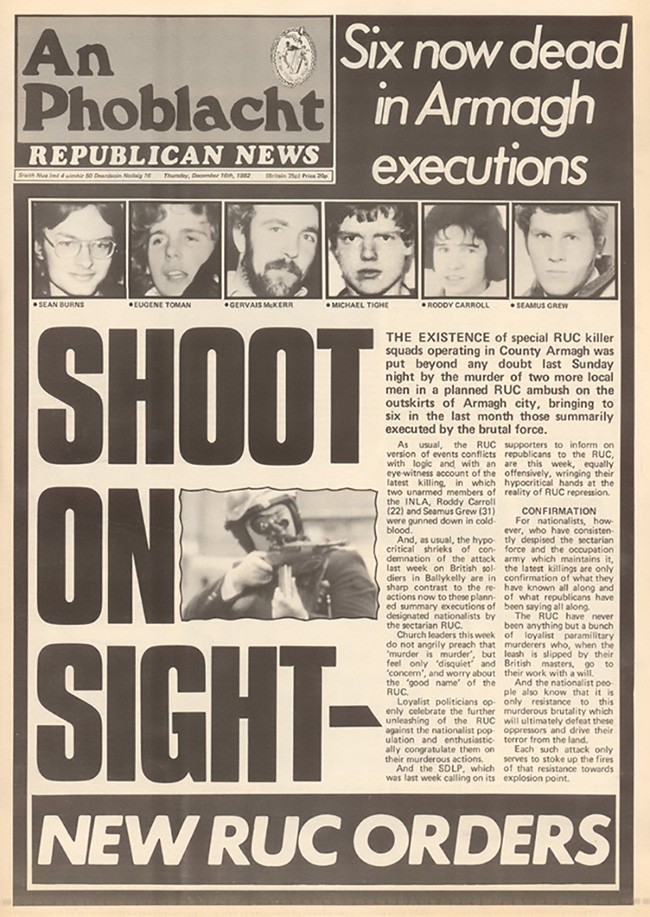 In the week that I started working in 44 Parnell Square, the British shoot-to-kill strategy began. Over the period of a few weeks, six people were assassinated. The dead included three Lurgan IRA volunteers (Gervais McKerr, Eugene Toman and Seán Burns), two Armagh-based INLA volunteers (Séamus Grew and Roddy Carroll), and Michael Tighe, a boy who had stumbled upon a disused weapons cache in a shed near Lurgan that was being staked out. Photographs of all six appeared on the cover of the December 16th issue.

While the armed struggle ebbed and flowed, it was the Assembly election results and the results of subsequent by-elections at council level that would dominate AP/RN coverage throughout Mick Timothy’s period as editor. By challenging the hegemony of the SDLP, Sinn Féin had become a target every bit as much as the IRA.

Mick Timothy laid down a marker that change was afoot when, in the first issue of 1983, AP/RN appeared with a red masthead. Since the hunger strikes, a dark grey masthead had been used. Prior to that, following the merger of the two papers in January 1979, it had been green.

The change upset some who saw it as a shift towards a more left-wing editorial approach. While such a shift would indeed take place, the colour choice for the masthead had nothing to do with it. When challenged at the 1983 Ard Fheis to explain and defend the change, Mick bluntly stated: ‘I like red’!

The real reason was his determination to get the paper onto newsstands, thereby widening the readership beyond those who traditionally bought AP/RN directly from a local republican activist.

Mick’s contributions generally appeared under the name Kevin Burke. An extremely witty man, his satirical ‘Burke’s at the back’ column was a must-read item. Following his untimely death, The Last Word and the Liam Óg column continued this style of satire while I contributed a ‘Jack’s at the back’ column for a couple of years also, but I believe that it’s fair to say that none of its imitators were as consistently entertaining as Mick’s pieces.

As a political weekly affiliated to the Republican Movement, articles were written from a republican and socialist perspective. Mick encouraged us to be as objective as possible, but when it came to reporting on IRA operations, successes were celebrated and near misses were described as ‘unfortunate’.

At a time when it was neither popular nor politically advantageous, AP/RN under Mick’s editorship made clear its support for the right to divorce and sided with those organising to oppose violence against women and the sexual abuse of children.

An example of this arose in the summer of 1984 when Mick wrote an editorial condemning a decision by the High Court in Dublin to uphold the dismissal of Eileen Flynn from her teaching post in a County Wexford school. She was pregnant and living with her long-term partner who was separated some years from his wife.

‘An Mála Poist’ the following week and for several weeks afterwards carried attacks on the editorial from those scandalised that the paper should take the side of immorality, as well as support from those who wanted to break with the confessional State and were thrilled that AP/RN had nailed its colours to the mast.

We loved the to-ing and fro-ing of ‘An Mála Poist’. It evolved into a forum for real and heartfelt debate on a range of serious issues, such as abstentionism from Leinster House or the IRA’s policy on punishment attacks on criminals/anti-social individuals, as well as frivolous issues such as the perceived bias of the weekly sports columnist!

1983 was also the year when the party began to challenge for and win seats at local government level in the Six Counties. Séamus Kerr became the first SF councillor in 50 years when he won a by-election for Omagh District Council. 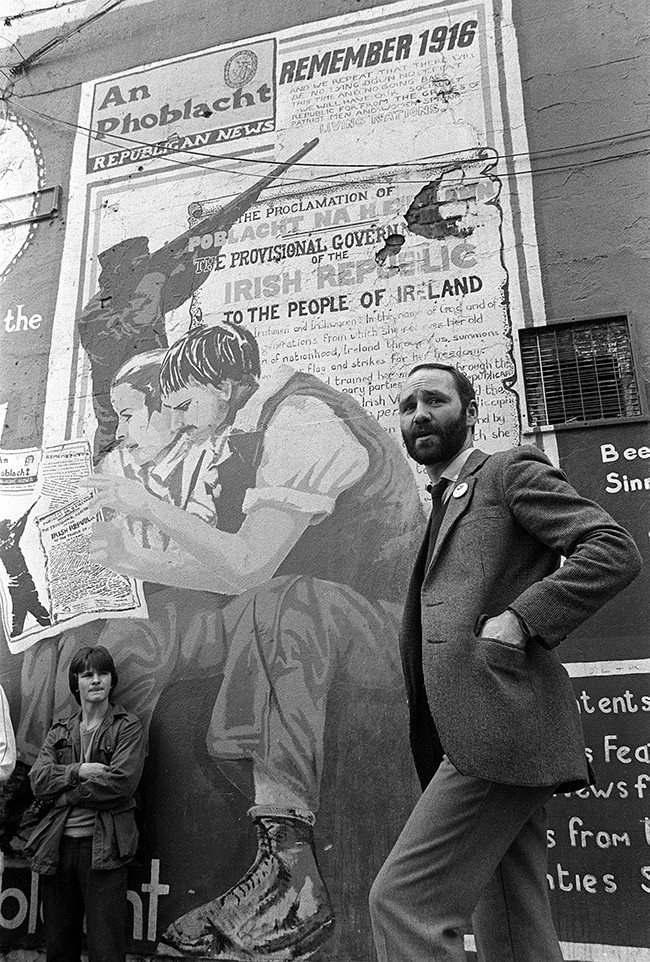 It was Alex Maskey’s election to Belfast City Council in July, and his subsequent brief attendance at a council meeting, that provided the paper with the first of many reports on the bitter and often violent opposition that Sinn Féin councillors faced as they took their seats on Unionist-dominated local authorities.

The election of Gerry Adams as MP for West Belfast provided further evidence that the electoral tide was turning. The issue of June 16th featuring Adams being carried shoulder high by supporters marked a new editorial and design departure for AP/RN as several other stories were graphically highlighted on the cover page. 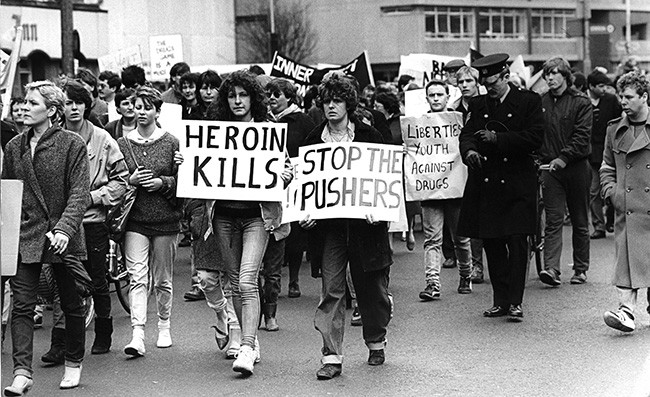 Also in 1983, AP/RN highlighted the emergence of a community-based campaign to tackle the scourge of the heroin trade in Dublin’s working class communities. The efforts of the Concerned Parents Against Drugs to put a stop heroin dealing met with establishment disapproval, but were supported and regularly reported in the pages of Ireland’s largest selling political weekly.

There could only be one lead story in the issue of Thursday, September 29th and that was the dramatic breakout by 38 prisoners of what had been described as ‘the most secure prison in Europe’! While election success had provided morale boosts, the breakout from the H Blocks of Long Kesh provided a huge lift for Irish republicans everywhere.

There was palpable excitement in the offices of AP/RN as we awaited the first interview with an escapee. This duly appeared in the following issue and included a memorable account of ‘how we did it’, complete with graphics of the H-Block complex and the route taken by the escapees to freedom.

Sinn Féin became the focus of condemnation every bit as much as the IRA, the lead article of the final issue of 1983 declaring that ‘a determined attempt is being made to justify an attempt to crush Sinn Féin, a legitimate and democratic political party. And the main reason is its success at the polls  both proven and potential.’

It is no exaggeration to say that we went on our traditional Christmas/New Year break fully anticipating that the paper might have to go underground.

Far from maintaining a low profile until the hysteria abated, the lead story in the first issue of 1984 was an exclusive IRA interview and a headline declaring the intention to ‘fight on’. Meanwhile in a strong editorial, Mick Timothy attacked establishment parties North and South who ‘toy with ideas of how to stop the expression of electoral support for Sinn Féin  - the only party with the prospect of achieving radical change in Ireland’.

The 1984 European elections was Sinn Féin’s first all-Ireland contest of that period and AP/RN provided weekly updates on the vigorous campaign fought by activists the length and breadth of the country. The results proved very disappointing, with John Hume comfortably retaining his seat and Sinn Féin securing about 10,000 votes less than had been won a year earlier.

‘No soft options’ was the headline in the following issue of AP/RN, quoting from an interview with Gerry Adams in which he explained that the election results had come as a reality check for the party.

That Gerry Adams was fit to be interviewed at all was an achievement, as he came close to death in a loyalist gun attack in central Belfast in which he and several colleagues were shot and seriously injured. I have a vivid memory of Mick Timothy emerging from his little office to break the news. He was as shocked and distressed as I ever saw him.

On May 10th 1984, Mick published my centrespread stories on ‘The Hidden Ireland’ and the ‘Life of a Traveller’ based on an interview with Stephen McAuley, a traveller who lived with his wife Ann and three young children in a lane just off Leinster Road in Rathmines. This was the first of a series of articles highlighting the prejudice and discrimination faced by the Travelling community that Mick had me and others cover.

Occasionally, editorial work on the paper would grind to a halt for cricket at Lords, Mick having grown to adulthood in Manchester and having a passion for the game that his staff could not fathom. Another of his pleasures was ‘Coronation Street’ and several of our wonderful typesetters would join him in his office at 7.30pm on Wednesdays to catch the then bi-weekly soap opera. 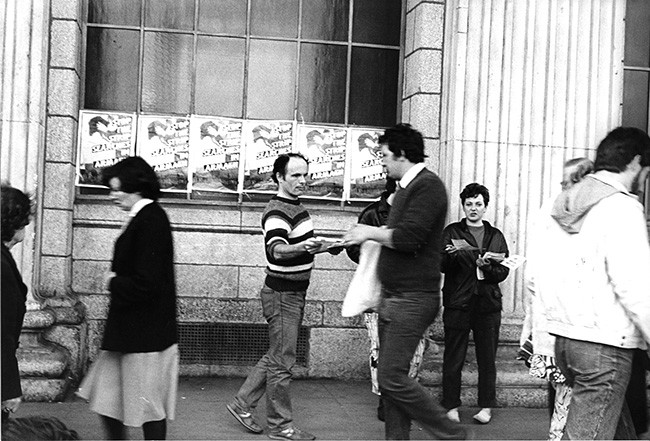 In this period, only AP/RN was providing a consistent insight into the extent of daily oppression endured by republicans in particular and by nationalists generally. This included; strip searching of women prisoners in Armagh Prison, destructive raids by Crown forces on thousands of homes, petty harassment at checkpoints, the RUC turning a blind eye to and even encouraging the activities petty criminals and joy riders, and increasing evidence of close co-operation between the British army and RUC and loyalist paramilitary gangs. All of these issues and more were covered in the pages of AP/RN on a weekly basis, but were only occasionally highlighted by other media, if at all. 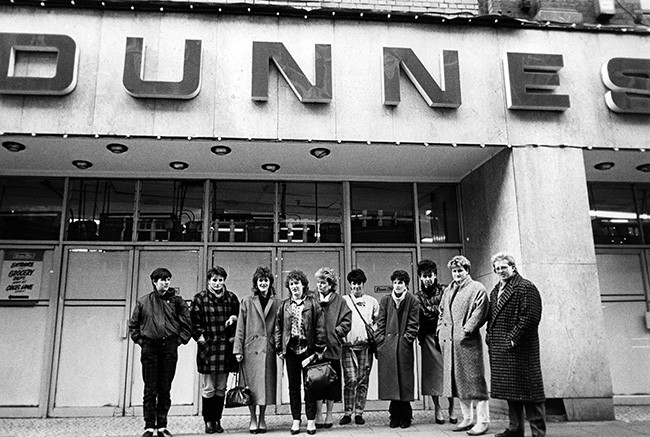 Similarly in the South, AP/RN was the only major publication consistently reporting on the deteriorating conditions for prisoners, on industrial issues such as the Dunnes Stores strike, and on a range of international issues from the campaign for nuclear disarmament, the anti-apartheid struggle in South Africa, liberation movements in central America, Israeli oppression of Palestinians, ETA’s fight for Basque freedom, and the repression being inflicted on oppressed peoples by regimes and despots, many of which were funded as part of US foreign policy.

With the highs and lows of the previous year behind us, the staff of AP/RN regrouped in January 1985 after the Christmas/New Year’s break, with Mick planning another new departure; the introduction of full colour photographs.

In late January, a man walked into the offices of AP/RN with a story about the sale the previous month of the B + I Jetfoil ship, on which he had been employed, explaining that the deal smacked of corruption.

For Mick, the story was especially important precisely because it was not the sort of story that would have been offered to AP/RN in the past. This man could have gone to any of the media offices in Dublin city centre, but he chose us. This was evidence that the strategy of widening the appeal of the paper by making the it relevant, accurate, and professional, was working. 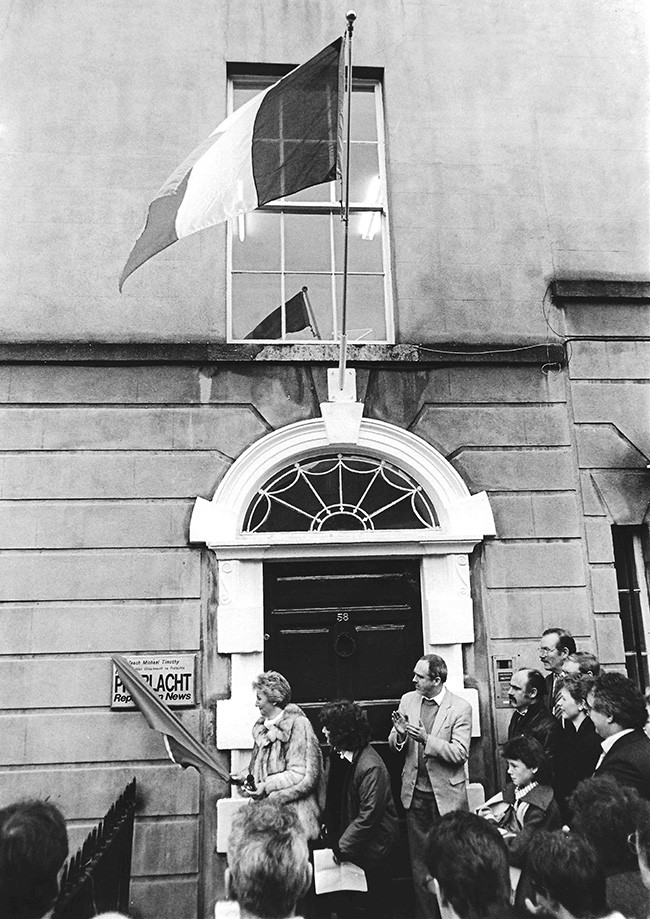 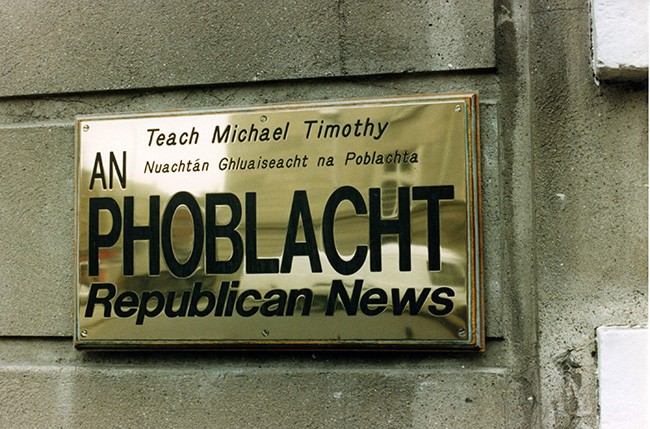 I vividly remember the devastation I felt at hearing the news that Mick had died of suspected heart failure. At his funeral, the day before we went to print, Danny Morrison said, that Mick’s “parting is a serious blow to our organisation in the twenty-six counties since he was a key figure in the research and planning committees of Sinn Féin. In the paper, he developed a style of revolutionary journalism which AP/RN is going to be hard put to, but has to, maintain”.

For the staff of AP/RN, that was exactly what we intended doing.