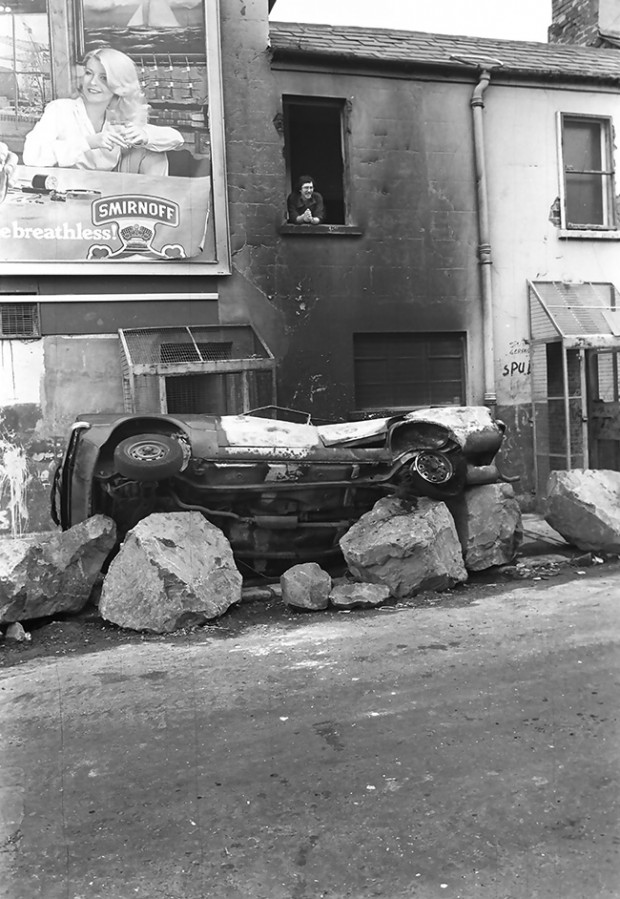 There are some dates that stick in everyone’s memory. Birthdays. Anniversaries. Historical events. One such for me is the date of the first edition of the merged An Phoblacht/Republican News (AP/RN) which was published on 27 January, 1979. I remember it well. The previous day, I had gotten out of Long Kesh. That’s the real date I remember. AP/RN is incidental.

However, two weeks later, I was in the AP/RN office at 170 Falls Road - which doubled up as the Republican Press Centre. I was working for both. For a time in the Kesh, I was the camp PRO with responsibility for writing statements on behalf of the prisoners, letters to the media, and, occasionally, articles for those outlets that would take them, including Republican News. Somebody, somewhere decided that that made me a fit for AP/RN and the Press Office.

The previous year, the Brits and RUC had arrested the Republican News editor Danny Morrison and others in an attempt to close down the paper. As a consequence, when I arrived fresh out of the Kesh, the new AP/RN was operating underground.

It was as if the paper was on-the-run. Those involved in writing the articles, Brian who drew the hugely popular Cormac cartoons, those doing the editing and design and sorting out photographs were all operating out of safe houses scattered across west Belfast. From Divis Flats to Twinbrook, there were sound people who allowed three or four and sometimes more people to congregate in bedrooms to produce the paper.

Keeping the writers and our sole designer and layout artist Danny D supplied with writing materials, newspapers, information on current developments outside of their four walls, sourcing photographs, holding editorial meetings to decide what that week’s front page would be, and collecting the finished product for the train to Dublin was very challenging.

Sometimes even finding the house or flat being used could be a challenge in itself! No mobile phones then. No computers or laptops. If there was a phone in the house, the first thing done was to disconnect it. And avoiding the countless RUC/Brit mobile and foot patrols required care and patience. 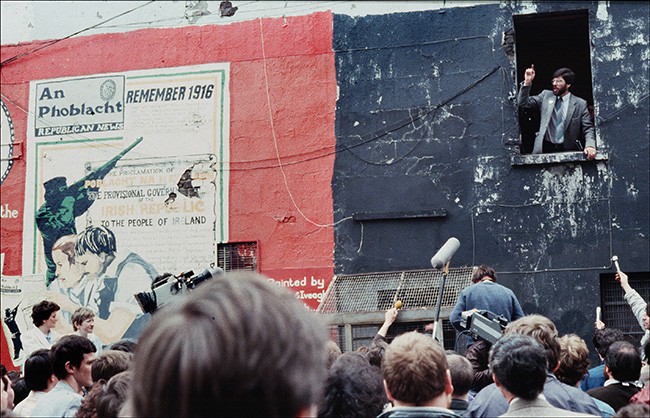 170 was always busy. As well as being the northern managerial hub for the paper, it was also the office that the northern drivers worked out of. They had the unenviable task of travelling each week to the printer in Portlaoise, pick up their copies, and then distribute AP/RN across the northern nine counties. They also drove writers to stories that had to be covered. That was dangerous for the drivers and the reporters.

During the hunger strike, An Phoblacht/Republican News was sometimes printing 50,000 copies a week. At times, the paper contained over 50 pages. Writing profiles of the hunger strikers, covering street protests, demos and funerals, and the weekly activities of republican activists, as well as the raids and killings carried out by the British occupation forces and their allies in the unionist death squads, involved a lot of work for the small team of writers.

The wear and tear on the cars which carried the thousands of papers every week was enormous. Many were jalopies picked up for a song. Consequently, it wasn’t unusual for vehicles to break down.

While everyone who contributed to the publication of AP/RN deserves great credit for their dedication and commitment, the danger that the drivers and those writers who travelled to their stories faced every week was enormous. Their routes were well known to the Brits/RUC/UDR. Being stopped by them in the dark of a winter’s night on a country road in Tyrone or South Derry or other parts of the occupied North, with a headline praising that week’s IRA attack, was not for the faint hearted. 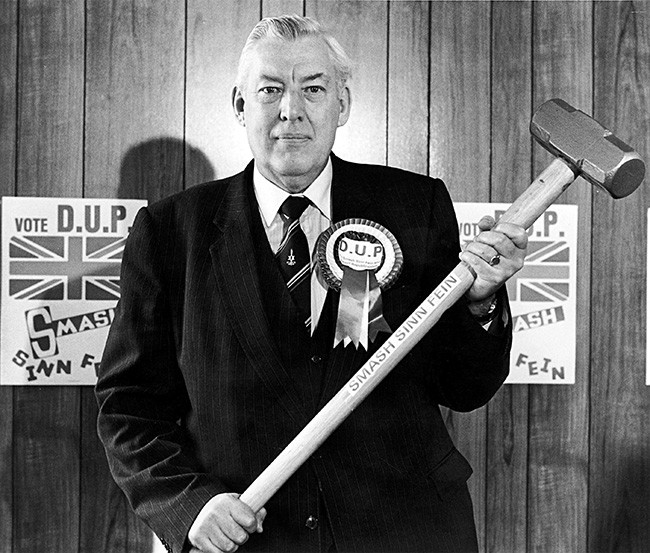 Ian Paisley and his sledgehammer threat to ‘Smash Sinn Féin’

Working in 170 had its moments also. It was occasionally raided. Getting in and out of the building without being stopped by the Brits was a daily chore. Watching out for possible attacks by unionist death squads was also necessary. One morning in February 1980, the UVF planned to shoot whoever would unlock the wire cage outside the front door. They opened fire on Joe Austin as he walked down Clonard Gardens. Brendan McLaughlin, a Catholic man who worked for the Housing Executive, was killed.

In 1980, we moved across the street to 51/53 Falls Road. It was essentially two houses knocked into one. It was in an awful state. Damp walls, floors that looked ready to collapse, rain coming through the roof, and metal gates as doors to deter the unwelcome.

For many years, a large mural of An Phoblacht/Republican News used to adorn the gable wall. The building was bombed more than once. It was the target of at least one loyalist RPG attack and, in 1992, an RUC man killed Pat McBride, Paddy Loughran and Michael O’Dwyer in the reception area.

It was also raided many times. Following one such raid in which the RUC decided to lift filing cabinets and documents from the variety of offices in the building, Tom Cahill decided enough was enough and he took the RUC to court for disrupting the business of the party and damaging the property. On the morning of the case, I was suddenly told by Tom to go and give evidence in the court. A rare and unusual experience. The last time I had been in a Belfast court, I was refusing to stand and recognise its jurisdiction. However, we won the case. 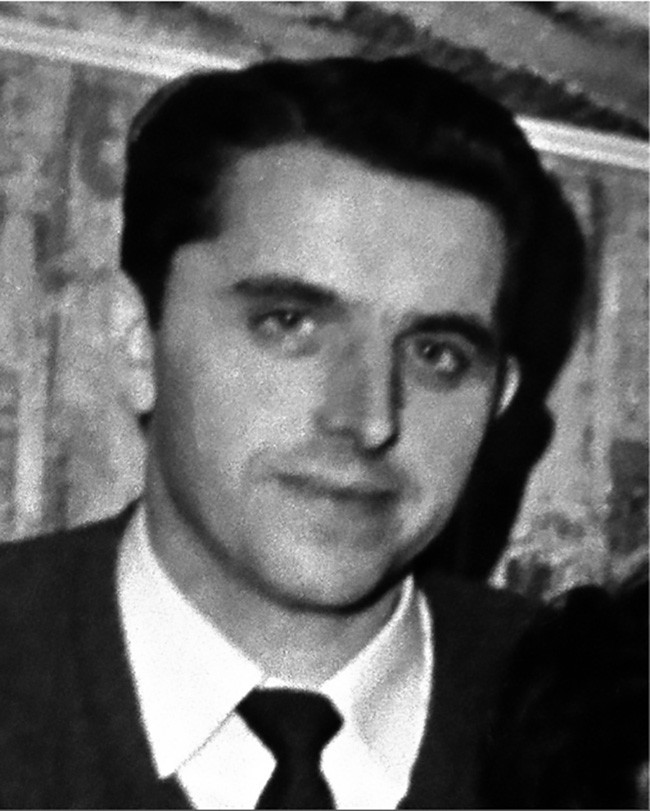 For a couple of years, I was working in the Twinbrook and Poleglass end of west Belfast, organising the party. Following the local government elections in 1985 in which Sinn Féin picked up 59 seats, including two in our area, I was moved back into the AP/RN.

The paper was no longer underground. The dangers remained but our small cadre of journalists were working out of the office. Between the summer of 1985 and the end of 1987, I was the northern editor of the paper working to Rita O’Hare in Dublin.

To write this piece, I borrowed a set of the hardbound editions of the paper for the three years I was doing that job. I thought it might be helpful in getting my thoughts together. The truth is I was amazed by the breadth and depth of articles and stories that the small team of writers I worked with in AP/RN in the North covered.

All of us – for obvious reasons – used pseudonyms. Our output was nothing short of phenomenal. Shoot-to-kill actions; war news; political analysis; reporting on the latest machination by Thatcher; or connivance from the Irish government; sectarian killings; collusion between unionist death squads, the RUC , UDR and British Army; Ian Paisley and his sledgehammer threat to ‘Smash Sinn Féin’; the paid perjurer arrests and trials; the strip searching of the women prisoners in Armagh; unionist efforts to silence Sinn Féin Councillors; housing stories; discrimination against Catholics in employment; house raids that often left homes wrecked; distraught families trying to pick up the pieces after a terrible event; surveillance cameras watching homes; the deaths of friends and comrades; and so much more.

An Phoblacht and separately Republican News and then together as AP/RN shone a light on the injustice and repression that was an integral part of the British state in Ireland. It also reported on all of those acts of resistance that took place every day and was the one consistent source of news and information that could be relied upon by the nationalist and Republican people of the North. It played and continues to play in these changing communication times an important role in advancing the republican agenda for Irish Unity.