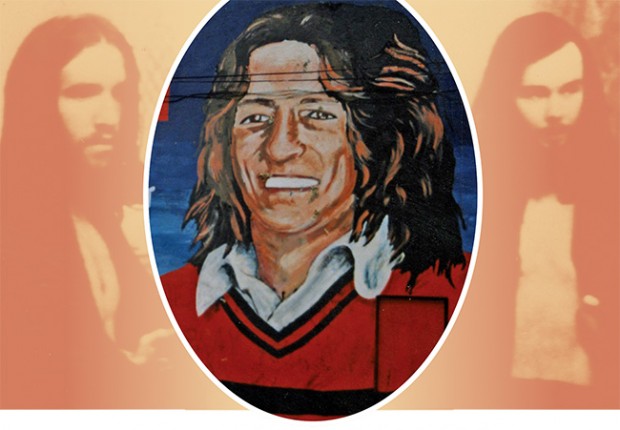 BOBBY SANDS was the most prolific writer of the republican prisoners in the H-Blocks of Long Kesh during the Blanket Protest which lasted from 1976 until 1981. He was in prison for most of that time, being arrested in October 1976 and sentenced in September 1977.

During his earlier term as a political prisoner, from 1973 until April 1976, Bobby was in ‘the Cages’ of Long Kesh where he and his comrades had special category status, effectively prisoner-of-war conditions. It was the British Government’s decision to end this status for people sentenced from March 1st 1976, in a bid to brand IRA prisoners as criminals, that led to the tragedy of the H-Blocks which would take the life of Bobby and nine of his comrades.

Bobby Sands was noted by comrades as a deep thinker and a profound reader, intense in political discussion, and talented in music and sport. His term in the Cages was a period of study and politicisation; like many of his comrades, he had been catapulted into the republican struggle by the tumultuous events of the early 1970s and had had little time to develop his politics.

The fruits of his time in the Cages were seen in his writings from the H-Blocks. During his short few months of freedom in 1976, he produced a local republican newsletter Liberty in Twinbrook.

The volume of material produced by the H-Block prisoners is remarkable, given the appalling conditions in which they lived, with all writing material strictly forbidden but ingeniously smuggled into the prison and passed between prisoners. These ‘comms’ (communications) were written in tiny handwriting with biro on cigarette paper.

In 1978, Bobby’s writings began to appear regularly in the Belfast-based weekly Republican News. He wrote mostly under the pen-name ‘Marcella’ (his sister’s name) but also as “a young West Belfast republican” and as PRO of the prisoners in H-Blocks 3, 4 and 5.

One of Bobby’s earliest published pieces, ‘I am Sir, you are 1066’ appeared in Republican News on July 1st 1978 and shows his ability as a writer to put the reader into his own position:

I must have died last night, because when I awoke this morning I was in hell. I don’t really know how I got here. I don’t think I’ve done anything to deserve being here. But I am here, and I am suffering terribly. I think I am in some sort of tomb. I can not see, as everywhere is in total darkness. I have no clothes on, except some sort of rag around my waist.

The floor of my tomb is covered in a wet mushy substance, the source or nature of which I don’t know. There is a revolting stench lingering in the darkness and the air is warm, heavy and humid. There is something soft and damp lying in the comer, which seems to be some sort of bedding to lie upon.

I can hear heavy booming noises echoing all around me like thunder. Somehow it reminds me of heavy doors closing. I check the four walls of my tomb; there appears to be some sort of a door in one of the walls.

I can’t understand my being here. What, I wonder, will become of me? I know I am a human being, although I’m naked and bearded. I can think and breathe. Am I in hell or some sort of limbo?

I can hear heavy footsteps approaching. They stop quite near to me. There is someone or something nearby. I can hear it moving and breathing. It is watching me. More noise directly outside my tomb, a rattle of metal against metal. A square form of light begins to materialise, revealing an entrance as a door swings open. A figure stands in the grey dim light of the doorway. It is a human figure, dressed in what appears to be some sort of black uniform. It stands scrutinising me in silence for several seconds before letting out a terrifying yell that sends shivers through my body.

“I am Sir!” The words echo around my tomb. “I am Sir!” it bellows again. “I am Sir, you are 1066!” The door slams shut with a loud explosive boom, killing the dim light where the entrance had been. Still afraid to move I stand in the total darkness.

What is 1066, I think? Obviously it is me, but I can think, speak, smell and touch. I have all my senses, therefore I am not a number, I am not 1066. I am human, I am not a number, I am not 1066! Who, or what, is a Sir? It frightened me. It was evil. I sensed its hatred of me, its eagerness to dominate me, and its potential violent nature. Oh, what will become of me? I remember I once had a family. Where are they now? Will I ever see or hear of them again?

It’s watching me. Once more the door opens. The dim light gives off a little illumination, revealing the black uniformed figure at the doorway. “I am Sir,” it says, “Here is your food, 1066.” A bowl is thrust into my hands as the door slams. Before the light dies I catch a glimpse of the floor. It is covered in filth and rubbish. There are several maggots clinging to my legs. The walls are covered with a mass of fat bloated flies. 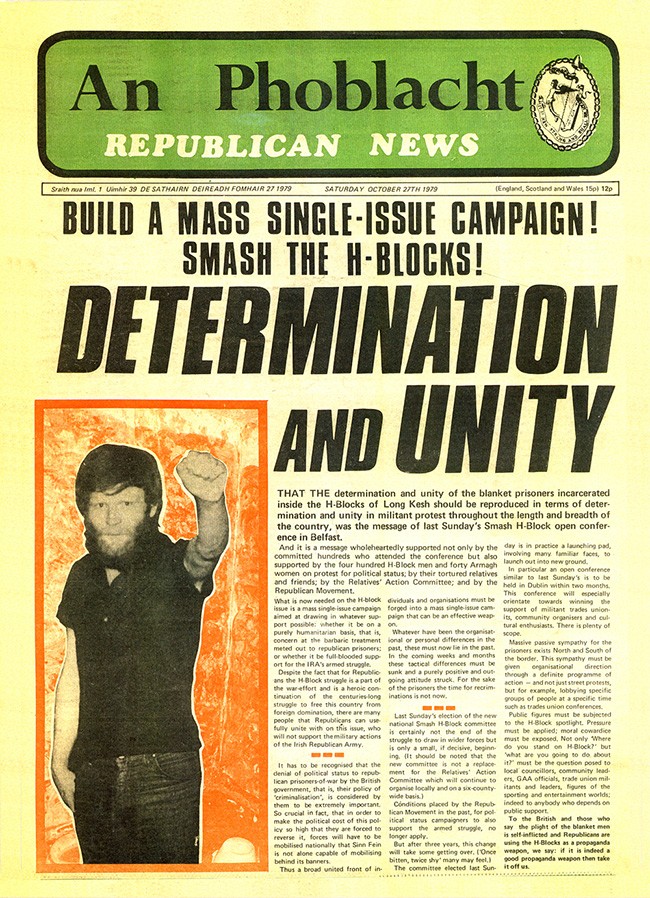 Once again I am terror-stricken. I pace the floor, aghast at my surroundings. The bowl in my hand is cold, it contains some sort of porridge or gruel. The smell from it revolts me. I set it down on the floor. Pacing the floor in total darkness, I become engulfed with depression and despair. I wish I was dead. “But I am dead,” I say aloud: I can’t even kill myself, I think.

A breeze: I feel a breeze coming from the wall behind me. Feeling about, I touch a piece of cloth. I tug it and it falls. A light of great intensity hits my eyes, temporarily blinding me. My tomb becomes illuminated with light, revealing a window divided with concrete bars, Stepping closer, thou-sands of lights of every size and colour appear in my view. These lights are perched upon mountains of barbed wire that glitter and sparkle on the ink-black horizon.

Another step forward, and still looking straight ahead, a small building looms up in front of me, displaying a dozen or so windows all of which are brightly lit up. Several naked figures appear at the windows. The building is thirty yards away. I can see that all the figures are bearded, they all seem to be fairly young, but all their faces are pale and haggard. They are young men but have old men’s faces. Am I gazing at death? These figures keep staring out at nothing, or pacing to and fro.

Footsteps again! I tum, apprehension again gripping me, to await my door being opened again. My new-found curiosity having diminished, I fall deeper into the depths of depression and despair. The thought of what lies on the other side of that door tortures me.

I awake, shouting and rolling in a filthy mattress on the floor. “Where am I?”

“Are you all right?” asks my cellmate.

“You are in your cell, you must’ve been having a nightmare,” he says. Our cell door opens and a black uniformed figure stands there,

He described the reality of the H-Blocks in many pieces for the amalgamated An Phoblacht/Republican News from January 1979.

He also wrote more creative short stories and poems, including a lengthy trilogy; ‘The Crime of Castlereagh’, ‘Diplock Court’, and ‘The Torture Mill - H-Block’. 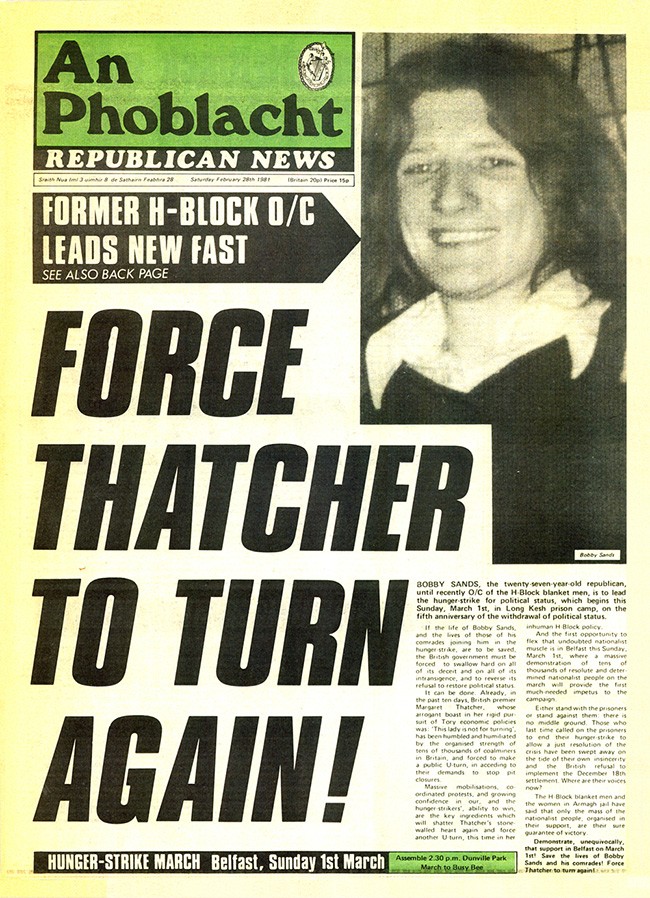 Bobby’s work was first published in book form as he neared death on hunger strike in April 1981.

The Writings of Bobby Sands, a 36-page booklet, was published initially by the Sinn Féin POW Department, 5 Blessington Street, Dublin and thousands of copies were sold immediately; the booklet being reprinted many times both then and in the years since.

In June 1981, Bobby’s hunger strike diary was published, his Prison Poems followed in October and his book, ‘One Day in My Life’, came out in 1982.

Also available now are ‘Bobby Sands – Writings From Prison’ (Mercier Press) a collection of Bobby’s writings and ‘Nothing but an Unfinished Song’, the excellent biography of Sands by Denis O’Hearn.