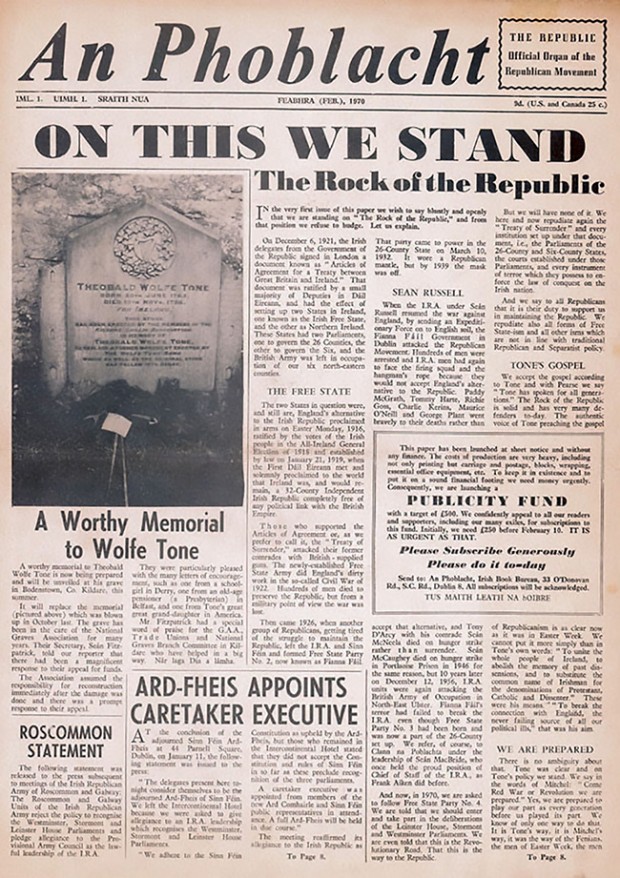 During the 1970s, when the conflict was at its most intense, republican newspapers played a vital role in community solidarity within the besieged but risen nationalist population in the Six Counties, and in getting the message to the wider public in the rest of Ireland and overseas. From 1970 until 1979 there were two republican papers – An Phoblacht ‘the official organ of the Republican Movement’ in Dublin and Republican News in Belfast.

Following the split in the IRA in December 1969 and Sinn Féin in January 1970, one of the first actions of those who rejected the Goulding/MacGiolla leadership and who formed the Provisional Army Council of the IRA and the Caretaker Executive of Sinn Féin was to launch a publicity fund with a view to establishing their own republican newspaper.

Since 1948 the newspaper of the Republican Movement had been The United Irishman/An tÉireannach Aontaithe and in the ‘69/’70 split the Goulding/Mac Giolla organisation retained control of that paper. The Caretaker Executive of Sinn Féin, which was formed by the delegates who walked out of the Ard Fheis on 11 January and resumed what they regarded as the legitimate Ard Fheis in Kevin Barry Hall, 44 Parnell Square, announced their intention to start a new monthly publication.

The name chosen was An Phoblacht (The Republic), the title of the IRA paper of 1925 to 1937. The paper was initially based at the Irish Book Bureau, 33 O’Donovan Road, South Circular Road, Dublin, which was run by 1916 veteran Joe Clarke, a member of the Caretaker Executive. Another member, Seán Ó Brádaigh, was the first editor. 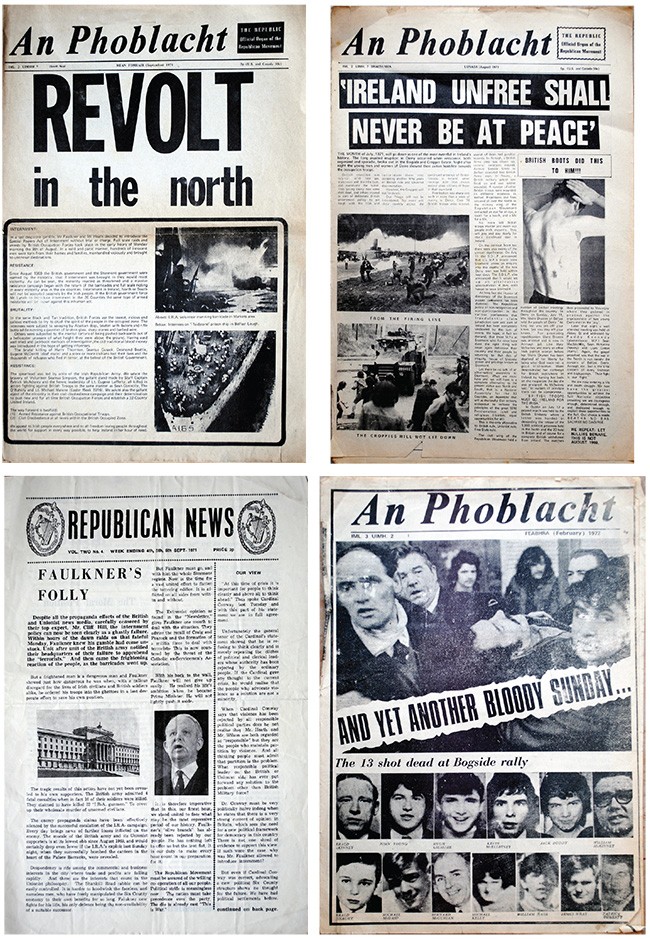 The inaugural issue consisted of eight pages and contained the first statements of the Provisional Army Council and the Caretaker Executive and carried reports from around the country of IRA units and Sinn Féin cumainn pledging allegiance to these bodies. An article described how some 250 members of Sinn Féin in North Kerry had been expelled in 1966 because they disagreed with the direction taken by the Goulding/MacGiolla leadership.

An Phoblacht was anxious to show that the position represented by the Caretaker Executive was not right-wing but advocated the development of an Irish form of socialism based on the tradition of ‘Comhar na gComharsan’ (co-operation of neighbours). It called for control of industries by workers’ co-operatives. Two articles covered the housing crisis in Dublin.

The paper’s Northern Correspondent had a lengthy feature on the Civil Rights movement. This is interesting in the light of subsequent events. It warned against either Socialists or Republicans trying to have their political demands adopted by the Civil Rights movement. Instead the writer urged unity on the basis of the original demands for an end to discrimination in voting, housing and jobs and the repeal of repressive legislation. The writer commented:

“I would point out that agreeing to work within the Constitution does not mean agreeing to uphold it – or even to like it, as many Unionists seem to think. The right to work openly and democratically for one’s political aims (which may or may not be the re-unification of Ireland) is one of the civil rights we claim.”

The March issue of An Phoblacht reported that 20,000 copies of issue No. 1 had been sold, the first papers going on sale at Dublin’s GPO on 31 January.

Six months later republicans in the Six Counties founded Republican News under the editorship of Jimmy Steele. The need for an additional paper in the North was felt given the torrent of events that were occurring as the Orange state lurched from crisis to crisis, with nationalist districts under siege from the RUC and loyalists and with the British Army playing an increasingly aggressive anti-nationalist role. 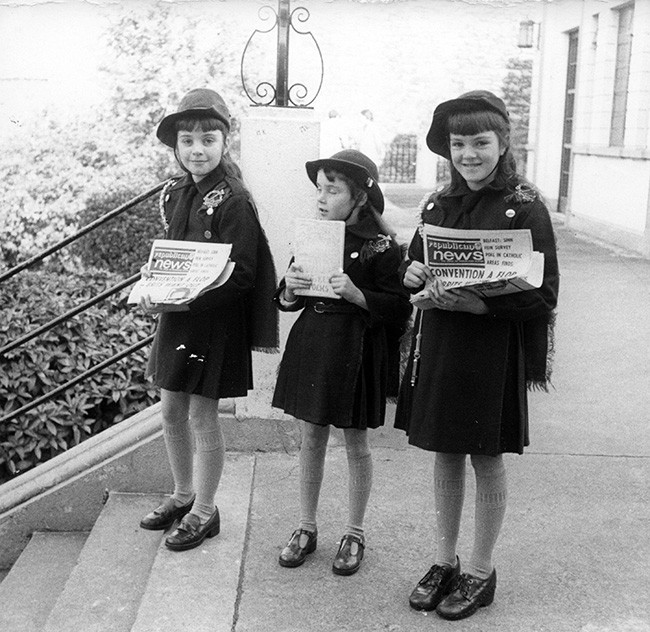 Jimmy Steele brought to his position as editor a lifetime of experience as an active IRA volunteer. Born in 1907 in Belfast, he joined Fianna Éireann and then the IRA. He was only 16 when he was first arrested, an experience repeated many times in the ‘20s and ‘30s. He was one of 12 republicans arrested in Belfast’s Crown Entry in 1936, leading to their famous trial for treason. Steele was sentenced to five years in Crumlin Road Prison. Released in 1940 he was re-arrested in December of that year and received a ten-year sentence. In January 1943 Jimmy Steele escaped from Crumlin Road with Hugh McAteer, Paddy Donnelly and Ned Maguire. Jimmy Steele served several more terms of imprisonment in the ‘40s and ‘50s, his final release being in 1960.

Steele pledged his allegiance to the Provisional Army Council in 1969. He was appointed Publicity Officer of the Belfast Brigade and in that capacity established Republican News as a monthly republican journal for the Six Counties. The first issue appeared in June 1970. It was a crucial period as the British Army became increasingly aggressive and was being seen in its true role as an occupying force by growing numbers of nationalists. This was seen most clearly in the Falls curfew of 3-5 July.

Steele in Republican News brought the traditional republican analysis to the situation, highlighting the reality of British imperialism then and in the past. He also used its pages to stress the anti-sectarian nature of republicanism, writing of Protestant patriots and appealing to the unionist population as fellow Irish people.

His editorship was to be short-lived, however, as, after two issues of Republican News, Steele died on 9 August 1970.

In the summer of 1972, Coleman Moynihan succeeded Seán Ó Brádaigh as editor of An Phoblacht and in August the paper moved from its offices at 2A Lower Kevin Street, Dublin, to Kevin Barry House, 44 Parnell Square. On October 1st, An Phoblacht became a fortnightly paper. Eamonn Mac Thomáis, the Dublin historian and author, took over as editor from Moynihan, following the latter’s arrest in November and within a few months, made major changes to the paper, with improved lay-out and more news reports. It eventually became a weekly paper on March 4th, 1973, with a circulation of 40,000 copies per issue. 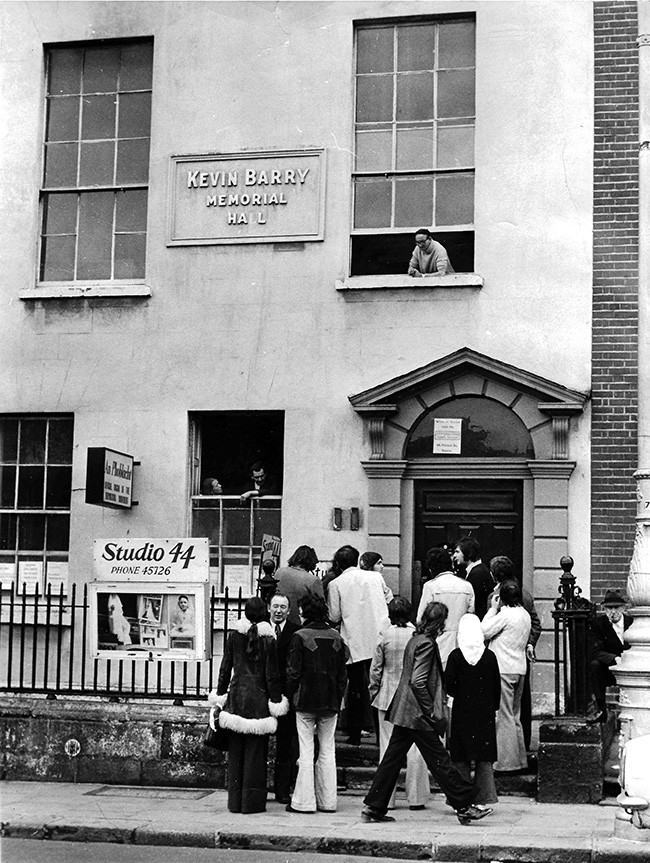 By this time An Phoblacht had become a target for increased harassment from the Garda Special Branch. In July 1973, Mac Thomais was arrested and charged with IRA membership at the Special Court in Dublin and the following month was sentenced to 15 months’ imprisonment. He was succeeded as editor by the Dublin journalist Deasún Breatnach.

Having completed his sentence in July 1974, Mac Thomais once more became editor of An Phoblacht, but within two months he was arrested during a raid on the paper’s offices and again sentenced to 15 months’ imprisonment.

During the following years, when the political establishment, through Section 31, attempted to stifle news from the republican viewpoint, An Phoblacht, edited at different times by a number of people including Gerry Danaher (1974-’75), Gerry O’Hare (1975-’77) and Deasún Breatnach (1977-’79), performed a key role in publicising the republican position in the 26 Counties. The amalgamation of the two papers in 1979 led to an immediate improvement in reporting and presentation and provided a vital national overview and a national network of sellers and readers.