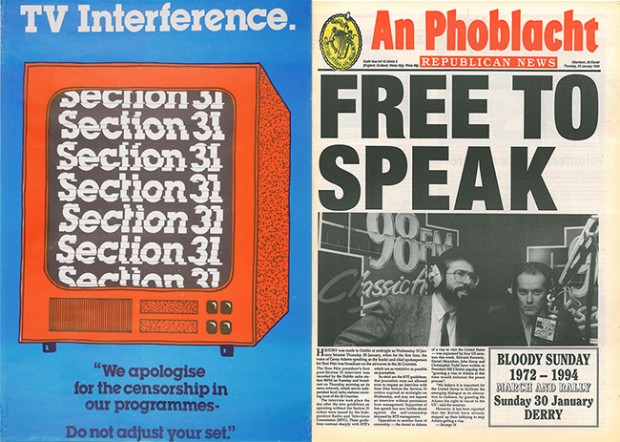 The role played by An Phoblacht in shifting the political discourse in Ireland over the last half a century is undeniable. Over the course of fifty years, it gave an authentic voice to the politics of Irish republicanism. This is particularly true of the dark days of Section 31 when the establishment did everything possible to ensure that the republican message and analysis was suppressed.

We have to remember that Gerry Adams gave his first interview to RTÉ television in January 1994. Due to the state directed policy of censorship, it was hard for republicans to be heard and it was easy for the establishment to demonise republicans. An Phoblacht stood strong in the midst of that storm. It was the main outlet for the opinions and arguments of the Republican leadership for three decades.

An Phoblacht’s editors, reporters, cartoonists, distributors, and sellers risked their lives to get out the truth about what was happening. It wasn’t easy. Often, they did this even as the threat of death and imprisonment hung over themselves, their families, and their communities. We owe them great debt of gratitude. We might never have built the political strength we enjoy today if it wasn’t for their work.

The publication has been fundamental in advancing Republican politics and in preserving the morale and unity during some very difficult times. The paper’s reporting on the dark and heart-wrenching days following Bloody Sunday and during the 1980-1981 hunger strikes are key examples of how An Phoblacht married the responsibilities of politically challenging the injustice of Britain’s brutal policies in Ireland, while also describing poignantly the human loss experienced within nationalist communities. An Phoblacht’s reporters were eyewitnesses to history as it unfolded on their streets and their writings covered important events ignored by the mainstream media.

An Phoblacht writers bravely countered the propaganda and lies of Britain’s dirty war in Ireland. It was the newspaper of the risen people. When a real opportunity for peace presented itself, An Phoblacht was again to the fore in articulating the republican position, in facilitating debate, and it played a unique role in maintaining the cohesion as Gerry Adams, Martin McGuinness, and others led Irish Republicans in a new direction. An Phoblacht was a front row witness and chronicler of the historic moments in the peace process and to the signing of the Good Friday Agreement.

Those editing and writing the An Phoblacht were acutely aware of the inseparable relationship between national liberation, the ending of partition, and the pervasive socio-economic inequalities experienced by workers and families across the entire island. While shining a bright spotlight on the systemic abuses of the Orange State in the North, An Phoblacht also took on the anti-worker, anti-republican politics of Fianna Fáil and Fine Gael and the southern state.

An Phoblacht has been a debating ground for big ideas on the issues that matter in the everyday lives of ordinary people in all thirty-two counties. It has relentlessly championed workers’ rights and trade unionism, the importance of social and affordable housing, the need for a strong all-Ireland public health service, spoke up without fear against criminal drugs gangs ruining communities, critiqued the many failings of capitalism and privatisation and it provided insights into how a fairer economy and society could be achieved.

A campaigning paper – Defending Britain miners and workers worldwide, opposing the invasion of Iraq and showing international solidarity to oppressed and supporting the abused people in society like the Travelling Community

Like all good journalism, it stripped the spin of the powerful from the facts on the ground and based its reporting on the lived experiences of those in communities.

The commitment to this approach ensured that An Phoblacht sustained its revolutionary verve and remained taboo to the establishment. The best way to judge the effectiveness of political writing is by how well it unsettles the powerful.

An Phoblacht certainly did that as it persistently challenged the prescribed narratives and oppressive norms of official Ireland. These writings have come not only from members of Sinn Féin and the republican movement, but from progressives of all political hues in Ireland and throughout the world.

An Phoblacht has a rich history of reflecting the internationalism of Irish republicanism. The paper played a key role in fostering bonds of friendship and solidarity between the republican movement in Ireland and struggles for freedom and economic justice throughout the world, most notably in Palestine, South Africa, Cuba, and the Basque Country.

It came to the defence of the working class in Britain in 1984 when Thatcher tried to crush the miners and mining communities during the great strike. For decades, it reached out and spoke to our allies in Irish America, a relationship that proved so influential in the success of the peace process.

As a campaigning paper with an international audience, it rightly opposed the 2003 invasion of Iraq and regularly criticised the folly of the push for US-British hegemony through aggressive military interventionism.

The writings in An Phoblacht have been staunchly and expressively anti-racist and anti-fascist. It has stood for the equal rights of women and it has never hesitated in fighting for rights of the most marginalised people in our society. It has been an unwavering advocate of the Travelling Community and a long-time ally of the LGBT community.

The paper has always prioritised radicalism and relevance over taking the easy path. It has never shied away from speaking truth to power or from holding to account the powerful institutions in Irish life whether that has been the state, the church or, more recently, the banks and financial institutions.

Interwoven with the role of providing a republican perspective on contemporary political issues, An Phoblacht has rightly placed an equal importance on the telling and the safeguarding of Irish revolutionary history. It recognised how essential it is that Irish republicans are to the fore in recounting the long story of the fight for Irish independence and how relevant the ideals of those revolutionaries are today.

For Republicans, An Phoblacht has been a forum for uncomfortable conversations and fierce debate on the direction of our politics. In a wider sense, it has always focused on standing for justice and afflicting the comfortable.

An Phoblacht has given expression to the unmanageable and unconvertable revolutionaries of our time. As it has evolved into a digital platform, it has retained its most important aim – helping to bring about change. We know that change in Ireland - North and South - is needed now more than ever. This is what Sinn Féin’s teams in the Oireachtas and the Assembly are focused on delivering.

The cause of Irish Unity has never been stronger. We know that the prospect of a Sinn Féin led government in the south after the next election is very real. As Fine Gael and Fianna Fáil continue to resurrect the politics of the privileged insiders and the old boys’ network, workers and families are looking to Irish republicans for leadership.

As our people contend with the challenges of the pandemic and Brexit, they are looking to Irish republicans for a better politics, a better way forward, and a brighter future. An Phoblacht will remain an important part of our efforts to deliver for them. As Irish Republicans, we are proud of An Phoblacht’s legacy and confident of its future. Here’s to the next fifty years of radical, relevant, republican writing and reporting.