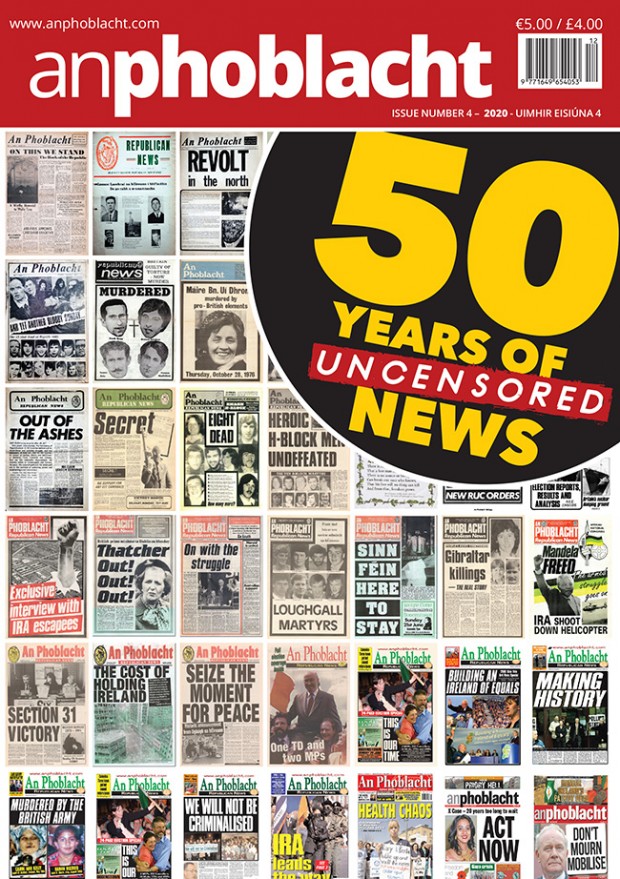 The republican voice will be heard. This simple commitment has been the driving force behind An Phoblacht for half a century. This idea has brought people together through multiple generations to produce editions of An Phoblacht.

Whether you were a writer, a driver, in reception guarding the doors, cleaning the offices, typesetting, designing, proofing, taking and printing photos, editing, and, most importantly, selling An Phoblacht, you were part of a chain that made an idea into a reality.

Preparing for this edition, we were for a long time unsure of how to tell the An Phoblacht story. The paper has been a witness and participant in all the years of conflict and peace since 1970. It has been a unique record of the transformation of Ireland.

There are hundreds of great covers. Some of them are in this edition and many of which we have included in recent issues. There were ground-breaking exclusive stories, with eye witness coverage of the war and then peace in Ireland. Alongside this was an analysis of Irish political life not found anywhere else. It is daunting to attempt the telling of this story.

What we did do was ask some of those people to tell their own unfiltered story of An Phoblacht. And so, we have a unique collection of writers and former editors in this edition. Their words provide a new history of this important aspect of the republican struggle.

As we were gathering material, we heard of the passing of former editor Gerry O’Hare. Danny Morrison penned an excellent reflection which is available on anphoblacht.com. In print, Laurence McKeown gave us some thoughts on his friend and our late former editor Brian Campbell.

An Phoblacht is the sum of the people who gave their time to it. For example, our MEP Chris McManus texted to remind me of the “thousand jacket sleeves ruined on a Friday night with ink” from selling the paper across Sligo town.

We must thank the sellers of An Phoblacht, as well as those in the offices who collected the money, paid the bills, wrapped the paper for posting, answered phones, managed the stream of callers to our offices. For many of my years in An Phoblacht, it seemed that the paper’s day to day operations were dependent on the greater republics of Cabra and Finglas. Thank you all.

Finally, the history of An Phoblacht and Republican News is inextricably linked with the history of republican struggle over the last 50 years. We thought it was fitting to mark this by including the Roll of Honour of the volunteers and Sinn Féin members who died during the conflict.