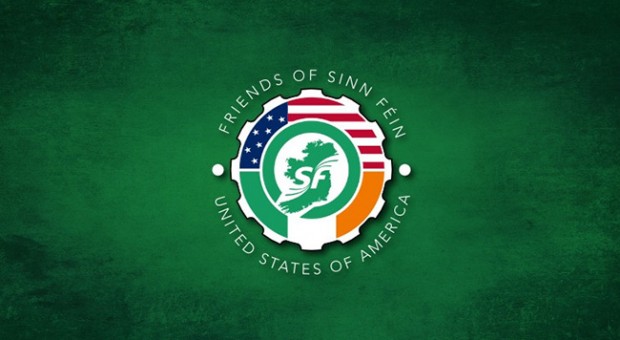 "The time has come to give the people of Ireland the opportunity to decide whether to reunify the island. The Irish Government should plan for and promote Irish Unity. The British Government should set a date now for a Unity Referendum, allowing time for debate over what form a United Ireland will take" - Mark Guilfoyle

The time has come to give the people of Ireland the opportunity to decide whether to reunify the island.  The Irish Government should plan for and promote Irish Unity.  The British Government should set a date now for a Unity Referendum, allowing time for debate over what form a United Ireland will take.

One hundred years ago, the War of Independence was raging in Ireland. The British Government responded by imposing partition, which created a pro-British Unionist controlled state in the northeastern six counties.  Eventually, the remaining twenty-six counties won independence.  Partition, the gerry-mandered division of Ireland, spawned decades of discrimination, state repression, and widespread conflict in the North.

In 1994, President Clinton approved a visa for Sinn Féin President Gerry Adams, despite fierce opposition from the British Government.  That same year, Friends of Sinn Féin USA was established to facilitate Americans hearing first-hand from Sinn Féin leaders about efforts to achieve Irish Unity through peaceful and democratic means.

In 1995, the United States appointed Senator George Mitchell as a special envoy.  Mitchell chaired negotiations that led to the signing of the Good Friday Agreement in 1998.  Conflict and repression were replaced by peace and democratic politics.  Henceforth, it would be up to the will of the people to determine their constitutional future.

The Good Friday Agreement is a significant American foreign policy success.  We have skin in the game, and we have contributed mightily to peace in Ireland over the last 23 years.  And this contribution has been bipartisan.  Democrats and Republicans have acted in concert to protect the Good Friday Agreement and to prevent the imposition of a hard border across Ireland in the Brexit process. 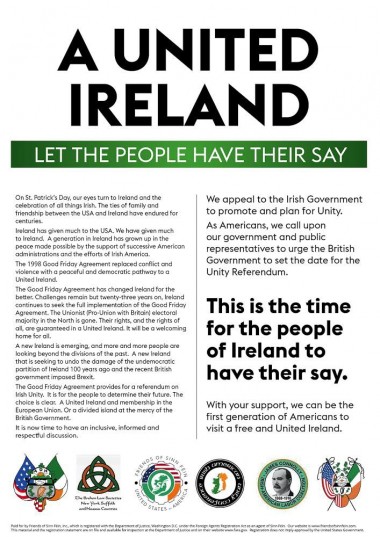 Underpinning the Good Friday Agreement is the fundamental democratic principle that it is up to the people to decide their constitutional future. The British Government is empowered to call a Unity Referendum when it appears likely that a majority of voters would express a wish that Northern Ireland should cease to be part of the United Kingdom and form part of a United Ireland.  This condition is met now.  Consider the following.

The Assembly that meets in Stormont on the outskirts of Belfast is far removed from the one that met one hundred years ago.  In the 2017 Assembly and 2020 Westminster elections, Pro-British Unionist parties no longer have an electoral majority.

Third, Brexit has accelerated the conversation on the future. Britain imposed Brexit against the will of the people of the North - 56% of whom voted to remain in the European Union.  Brexit is wreaking havoc in Northern Ireland, but it can automatically rejoin the EU as part of a United Ireland.

The debate on a Unity Referendum is no longer a whispered conversation. It is a democratic imperative. Even Unionist leaders are recognizing the inevitability of a referendum.

Some say that now is not the time. But those same people do not offer an alternative timeframe and refuse to acknowledge the scale of change that is undeniably underway in Ireland.

Ironically, these Unity deniers include the Irish Government, which refuses to prepare for a Unity Referendum. This is an unsustainable position, an abdication of its constitutional obligation to promote Unity as the will of the Irish nation.

Presently, leading Irish American organizations are calling on the Irish Government to engage with the discussion and to plan for and promote Irish Unity, in keeping with its Good Friday Agreement obligations and the imperative of the constitution of Ireland.

Irish America is on the side of building a new and United Ireland, an Ireland that is a peaceful and prosperous home for people of all traditions and cultural persuasions.  Just as Ireland’s “exiled children in America” supported the Easter Rising in 1916, and just as Americans have stood as guardians of the Good Friday Agreement for these last 23 years, we Americans have a stake in seeing the Irish people have their say in a referendum.  Is there anything more American than that? 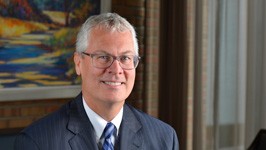 ​Mark Guilfoyle is President of the Friends of Sinn Féin USA.  He practices law in Kentucky.  During 1991-95, he served as General Counsel to the Governor, Secretary of the Governor’s Executive Cabinet and State Budget Director in the Commonwealth of Kentucky.