Centenary of IRA victory at Crossbarry 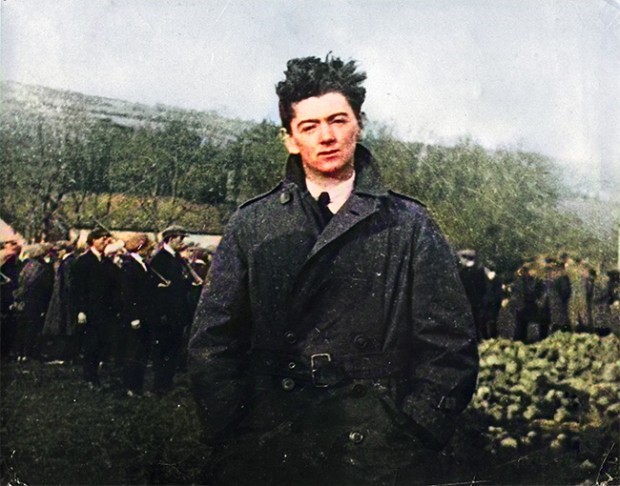 While Tom Barry and the IRA’s West Cork Flying Column are best known for the Kilmichael ambush in November 1920, the Column’s success at the battle of Crossbarry in March 1921 was at least as important, as the IRA outwitted and outfought a British force more than ten times its size.

In the spring of 1921 the British regime was massing ever greater forces in the parts of the country where resistance to its rule was most persistent and effective. Tom Barry wrote that by the middle of March the British invariably operated in West Cork in units of not less than 300. On St. Patrick’s Day the Flying Column, 104 men strong, was waiting in ambush positions for British forces at Shippool on the Bandon to Kinsale Road. They waited all day and when no enemy appeared they withdrew to billets.

At 2.30am on 19 January Tom Barry was awakened with the news that lights had been seen and engine sounds heard approaching their positions. He assembled the column. “I had to decide without delay whether to fight or to retire and attempt to evade action. The decision to fight was made immediately”, wrote Barry. He reasoned that the British would attempt to encircle them with overwhelming forces and that any attempt by the IRA to simply retreat would see many men killed and captured as they ran into the advancing enemy.

Barry had in mind both the immediate tactical necessities and the strategic position:

“A heavy and successful attack on those large British round-ups was an overdue strategic necessity. Hitherto they had not been attacked and there was a grave danger that by their wholesale arrests of Volunteers, captures of dumped arms, and intimidation of the civilian population, they would seriously interfere with the Volunteer organisation and damage the morale of the people”. (‘Guerilla Days in Ireland’).

The British deployed around 1250 British Army troops and 120 Auxiliaries against the IRA. They swept across the West Cork countryside raiding homes and arresting people as they went. The Officer Commanding the Third Cork Brigade, Charlie Hurley, was resting in a safe house, having been injured in a previous action. The house was raided, Hurley resisted and he was shot dead. 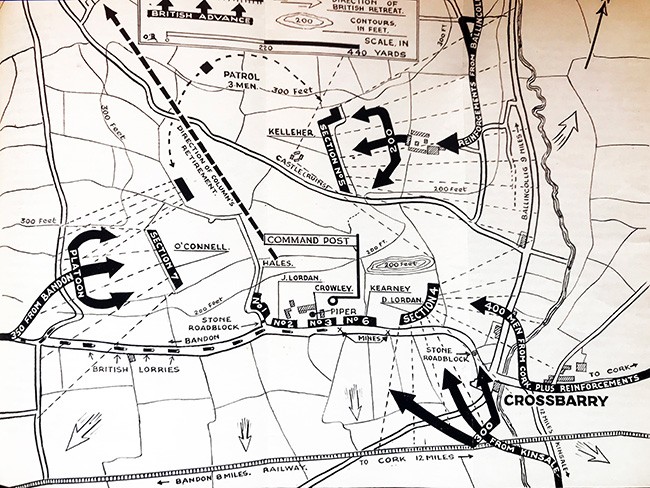 Barry’s men had only about 40 rounds of ammunition per rifle so he planned a swift attack on the enemy at close quarters for maximum effect. His plan was to smash one side of the surrounding enemy forces, so that the Column could hit hard and withdraw safely. The IRA were in their ambush positions at Crossbarry by 4.30am. By now Barry and his men were seasoned guerilla fighters, masters of observation of the enemy and concealment of themselves, using their intimate knowledge of the countryside and the support of the people. The women of Cumann na mBan assisted the awaiting Column, delivering reports and messages.

The Volunteers actually heard the shots that killed Charlie Hurley at 6.30am. By then there were 73 officers and men deployed and ready for the attack on the enemy column and 31 others protecting the flanks and rear of the ambush position. At 8am a long line of British lorries approached Crossbarry and drove into the IRA trap. Nearby, the Column piper Flor Begley played martial airs on the bagpipes that encouraged the Volunteers and made the British forces think they were facing far greater numbers than they really were. 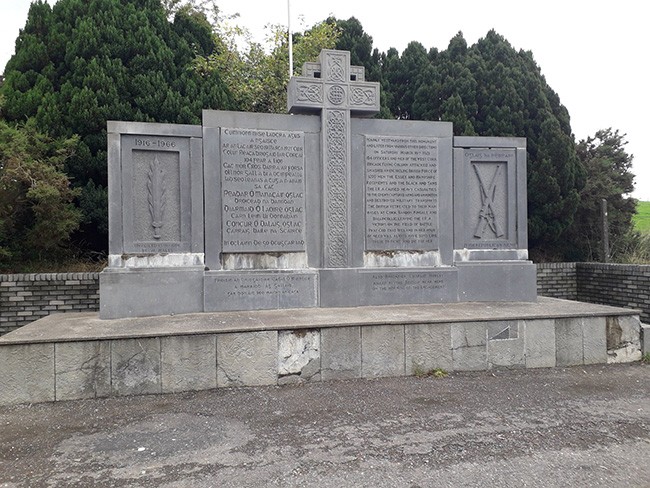 The IRA fired volley after volley into the enemy lorries and the scattering troops, inflicting many casualties. The first part of the ambush was a total success. A new Lewis machine gun and many rifles and ammunition were captured. Barry said that at that point the IRA could have safely retreated but he was confident that they could meet the next attacks from the British. Three more enemy efforts were made from different directions but all failed as the IRA fought fiercely and the British fell back in disarray.

Barry ordered the enemy vehicles set on fire, after the dead had been moved clear of them. The British later admitted only ten killed but other estimates go as high as 39, with many injured. Three IRA Volunteers were killed in the battle – Con Daly, Jeremiah O’Leary and Peter Monahan. The Flying Column marched away and West Cork was theirs, with military and political implications that went all the way to London.