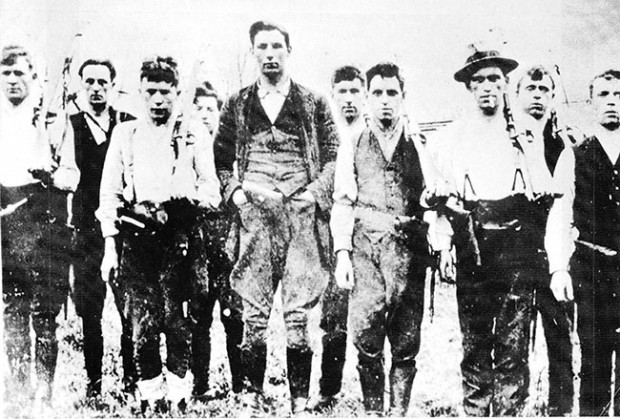 In the fight for freedom 1919-1921 no County matched Cork for the level and intensity of armed resistance to British rule. It was there that some of the fiercest fighting took place. The IRA’s three Cork brigades inflicted heavy casualties on the crown forces but also suffered serious setbacks themselves, notably on 15 February 1921 at Mourne Abbey and Upton Station and worst of all five days later at Clonmult.

The Cork Number 2 Brigade, covering the north of the County, was under the command of Liam Lynch. He received an intelligence report that a conference of British officers was to be held in Cork City and so he ordered the preparation of ambush positions on the roads from Fermoy and from Mallow to the city in the hope of attacking enemy vehicle convoys. The Mallow Battalion Flying Column led by Commandant Jack Cunningham occupied an ambush position near Mourne Abbey. 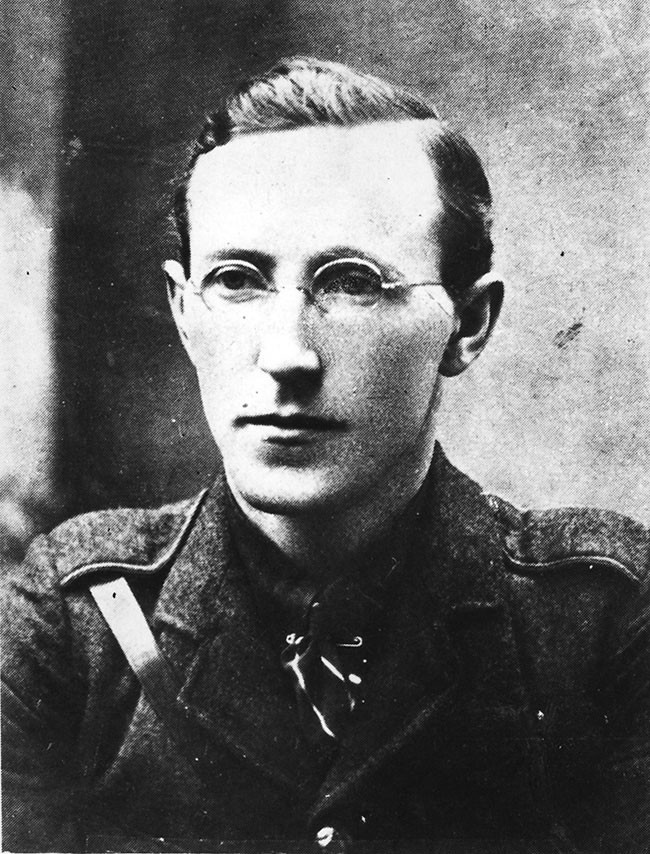 The greatest asset of the IRA was the staunch support of the people who could be relied upon to provide shelter and also to warn them of danger. On this occasion the alert came from a young woman, Siobhán Creedon. She was cycling when she noticed suspicious activity by British forces on the back roads. She sped to Mallow and alerted the IRA. An officer rushed to the ambush position but by the time he arrived at Mourne Abbey it was too late. The column was almost completely encircled by heavily armed soldiers of the British Army’s Manchester Regiment.

A fighting withdrawal from the ambush position was ordered. In the exchange of fire that ensued three Volunteers, Patrick Flynn, Patrick Dorgan and Eamon Creedon were killed, and a fourth, Michael Looney, was gravely wounded and died later. The British forces captured eight IRA prisoners. Four were put on trial by a British Military Court and two were sentenced to death. Patrick Ronayne and Thomas Mulcahy were executed in Cork on 28 April 1921 for their part in the Mourne Abbey fight.

On the same day as the Mourne Abbey events, another fatal clash took place at Upton, between Bandon and Cork City, in the area of Cork Number 1 Brigade.  Acting on information from Florrie O’Donoghue, Chief Intelligence Officer of the Brigade, 13 Volunteers under the command of Commandant Charlie Hurley set up an ambush at Upton railway station. 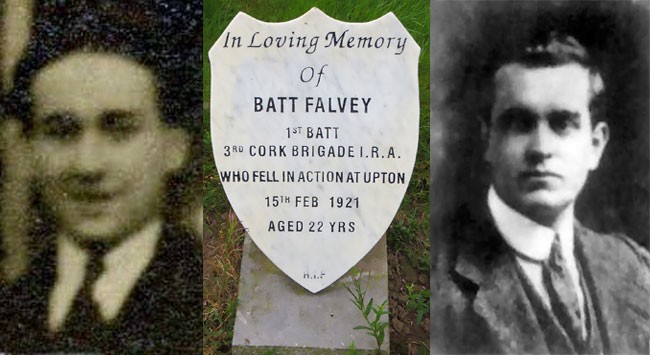 For much of 1920 the railway system had been paralysed by a railway workers’ strike against the British military. The workers refused to carry British military equipment and personnel on the trains. This dealt a serious blow to the British regime, forcing their convoys onto the roads where they were more vulnerable to IRA attack, and costing them dearly in financial and political terms. The strike ended in December 1920. The British crown forces returned to the railways and made the IRA’s task more difficult by mingling with civilian passengers in railway carriages, effectively using them a human shields.

The IRA’s information was that about 15 British soldiers were on the train bound for Upton but they were unaware that 50 troops had boarded at Kinsale Junction. The IRA also believed that the enemy would be concentrated in one carriage. A local scout in the area attempted to alert the IRA unit to the changed situation but was unsuccessful. When the train arrived at Upton Station, the Volunteers opened fire and the British troops returned fire.

In the ensuing battle, eight civilians were killed. Two Volunteers were killed instantly, Seán Phelan and Batt Falvey. Pat O’Sullivan died three days later from wounds received at the battle. It was believed that five British soldiers died in the action. Commandant Charlie Hurley was wounded in the ambush. He killed a few weeks later in a safe house at Ballymurphy near Crossbarry by crown forces. The eight civilians killed in the crossfire at Upton were William Finn, John Sisk, Charles P. Johnston, Richard Arthur, James Byrne, John Spiers, Thomas Perrott Sr and Mary Hall.

Five days later the IRA suffered its highest number of casualties in a single incident during the Tan war, again in the 1st Brigade, in the east of the County at Clonmult, north of Midleton. This was the operational area of the 4th Battalion flying column. In December they had attacked crown forces in Midleton, killing two Black and Tans and capturing a good haul of weapons. In early January they moved across country and based themselves about a mile from the village of Clonmult in an abandoned thatched, single-storey farmhouse with outbuildings. Unusually for a flying column, they stayed there for several weeks, thus increasing the danger of detection by the enemy, or of being informed upon.

The flying column received orders from Florrie O’Donoghue to prepare an attack on a train carrying British munitions on the Cork to Cobh line. The column prepared to move out of Clonmult for this operation on 20 February. But before they could leave, disaster struck. It seems that sentries posted at outlying points, 24 hours a day, to protect the farmhouse, had either failed to be alert or had left their posts without orders. British crown forces had succeeded in surrounding the place, with most of the column now trapped. These soldiers of the British Army’s Hampshire Regiment opened fire on the house and a siege began. 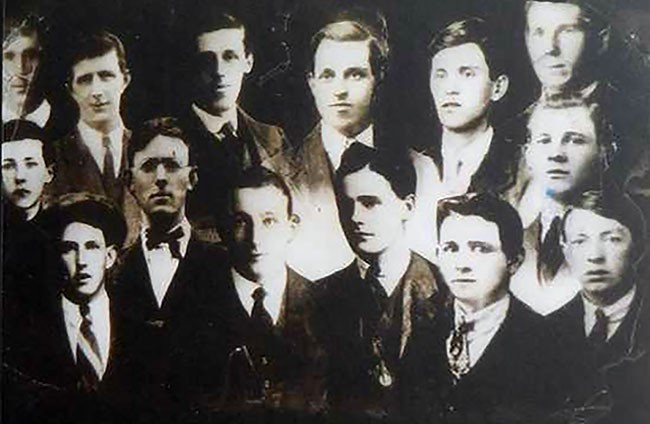 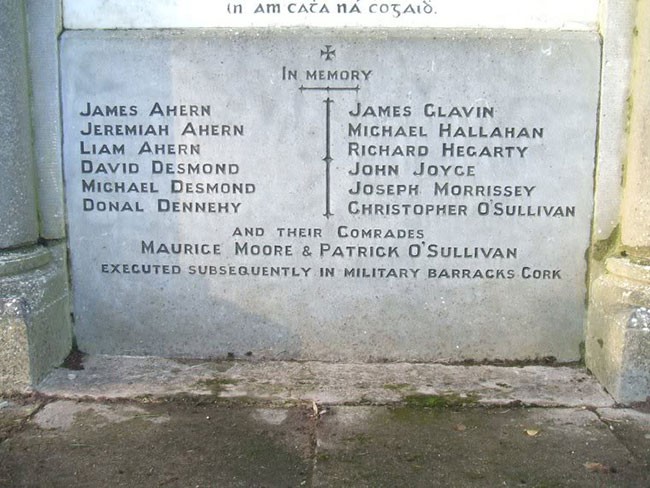 The decision was made by the trapped IRA men to try and hold out as long as possible while others tried to escape to bring back reinforcements. The attempt was led by Captain Jack O’Connell, who managed to escape. He contacted other Volunteers and sent them to Conna, six miles away, to get reinforcements. Michael Hallahan, Richard Hegarty and James Ahern died in the escape attempt. Jeremiah O’Leary made it back to the house but was badly wounded.

British reinforcements arrived in the form of Black and Tans and RIC. They proceeded to set fire to the thatched house. Volunteers Galvin and O’Leary were both shot dead as they made an opening in the gable of the house. A decision to surrender was made before leaving the house and the Volunteers destroyed their rifles.

As they emerged from the house with their hands up, Joseph Morrissey, James Galvin, Donal Dennehy, Liam Aherne, Jeremiah Aherne, Christopher Sullivan and David Desmond were all shot by the Black and Tans. The intervention of a British military officer stopped the shooting and the remaining eight Volunteers were later tried by court-martial and sentenced to death. Two of these sentences were carried out. Maurice Moore and Paddy O’Sullivan were executed 28 April 1921; the other sentences were commuted. The life of Captain Paddy Higgins, recovering from wounds, was spared due to the July 1921 Truce.