Immediate change in culture and ethos of policing needed

‘A watershed for moment for public confidence in policing’ was how Leas Uachtarán Shinn Féin Michelle O’Neill described the events of recent days when PSNI officers forcefully interrupted a socially distanced commemoration to victims of the 1992 mass shooting at Sean Graham bookmakers on Belfast’s Ormeau Road, arresting one of the survivors Mark Sykes, who was led away in handcuffs.

Days before the PSNI had not intervened in East Belfast as up to 40 hooded and masked members of the UVF had gathered in the Pitt Park area.

Speaking after leading a Sinn Féin delegation which included John Finucane MP, Deirdre Hargey MLA, and Gerry Kelly MLA to meet the PSNI Chief Constable, Michelle O’Neill said, “we had a forthright and frank meeting with the PSNI Chief Constable to discuss the turbulent events of recent days which have caused unprecedented anger in recent times as well as discussing wider concerns around policing.

“I made it clear that the events of last week, both the arrest of a victim laying flowers on the anniversary of the Ormeau Road massacre and the PSNI’s failure to intervene as dozens of masked UVF members roamed the streets have created a crisis in public confidence in policing.

“The stark contrast between the policing operations in East Belfast and on the Ormeau Road has caused considerable anger and I reflected this to Simon Byrne.

“I told the Chief Constable that what happened is not the new beginning to policing that society and the community had been promised.

“I raised the arrest of Mark Sykes, a victim of the Ormeau Road Massacre, who was led away in handcuffs, and about what will happen next in that case.

“I left the Chief Constable in no doubt that the events of recent days are a watershed moment for policing and public confidence in policing.

“We need to see a change in the culture and ethos of policing with the community and that needs to start immediately.

“I also raised the frustration of the families of those killed in the Ormeau Road massacre and the need for the Police Ombudsman’s report into the killings to be published as soon as possible.

“There is a pressing need to address the legacy of the past and that needs to be done by implementing the legacy mechanisms of the Stormont House Agreement in a human rights compliant manner.” 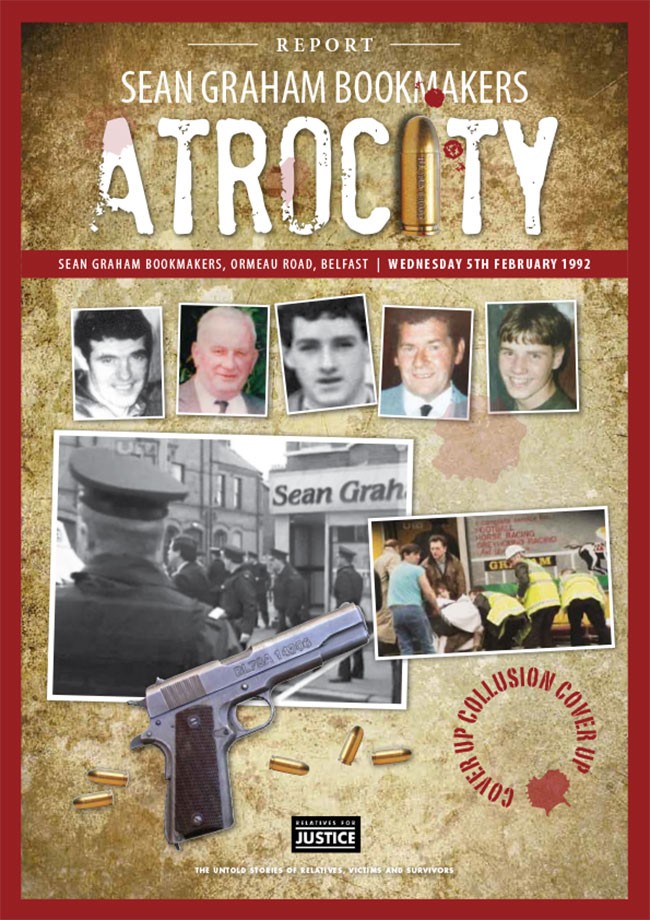 In the wake of these events on South Belfast’s Ormeau Road and East Belfast’s Pitt Park, the policing of northern nationalist communities is once again in the spotlight with politicians, human rights organisations and commentators calling for a Patten-type assessment of PSNI methods and attitudes to policing.

The social media posts exposing the aggressive behaviour of PSNI members pushing and jostling those, mostly relatives of the dead and the wounded, attending the event to mark the 29th anniversary of the Sean Graham’s Bookies massacre has led to widespread anger across the nationalist community.

With the pressure mounting on PSNI Chief Constable Simon Byrne to explain the actions of his officers it has emerged that one of the officers involved has been suspended while another has been “repositioned”. Sinn Féin described the announcement as a “token gesture”.

And the images of PSNI men shoving people, leading one young woman to suffer leg injuries, before grabbing and arresting Mark Sykes, a survivor of the 1992 attack, by forcing his arms behind his back and handcuffing him has added to that anger as he was clearly shown to be holding a floral tribute and challenging the PSNI over their lack of action at Pitt Park. 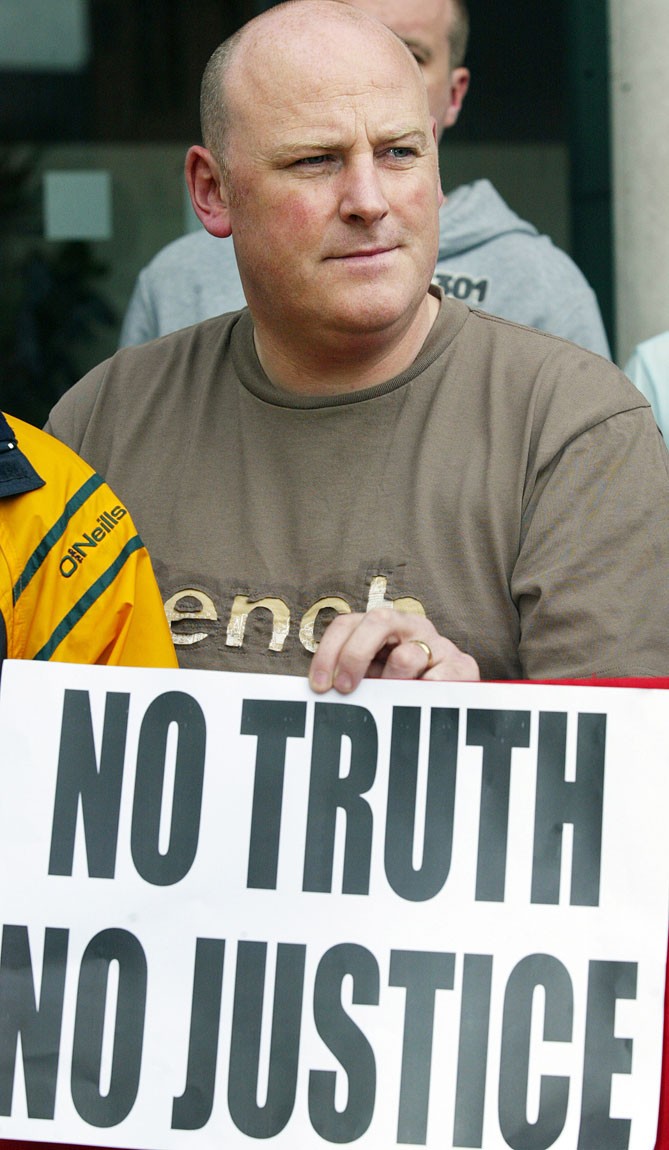 Mark Sykes, pictured at a collusion picket in 2007

Sykes, who was shot seven times in the 1992 attack said, “the handcuffs were dug in tightly to the bullet wounds I suffered 29 years ago to the day”.

Speaking after viewing the footage of the incident Sinn Féin’s Gerry Kelly, the party’s justice spokesperson, expressed his anger saying “it beggars belief that the PSNI have acted in such a heavy handed way with victims of loyalist violence in a week when the PSNI didn’t as much as take a name or stop a single member of an East Belfast UVF criminal gang”.

Kelly was referring to the events days earlier in Pitt Park, East Belfast when dozens of masked UVF thugs openly marched through the area in a show of strength aimed at intimidating people who have spoken out against the gangsterism of the loyalist gang.

PSNI officers stood watching, making no move to intervene, as the masked loyalists marched through the area in a show of strength.

A statement from Mark Thompson of Relatives for Justice highlighted the active collusion in 1992 between the RUC and the UDA gunmen involved. “At the very time of day when 29 years ago the UDA with state assistance entered Sean Graham’s bookmakers and killed five people, the PSNI vindictively decided to disrupt, insult and create unprecedented and callous hurt.

“The very same institution – the PSNI – that has prevented and thwarted effective investigation into these killings decided to intervene in a safe and socially distanced commemoration. This is beyond outrageous and there must be immediate accountability”, said Thompson. 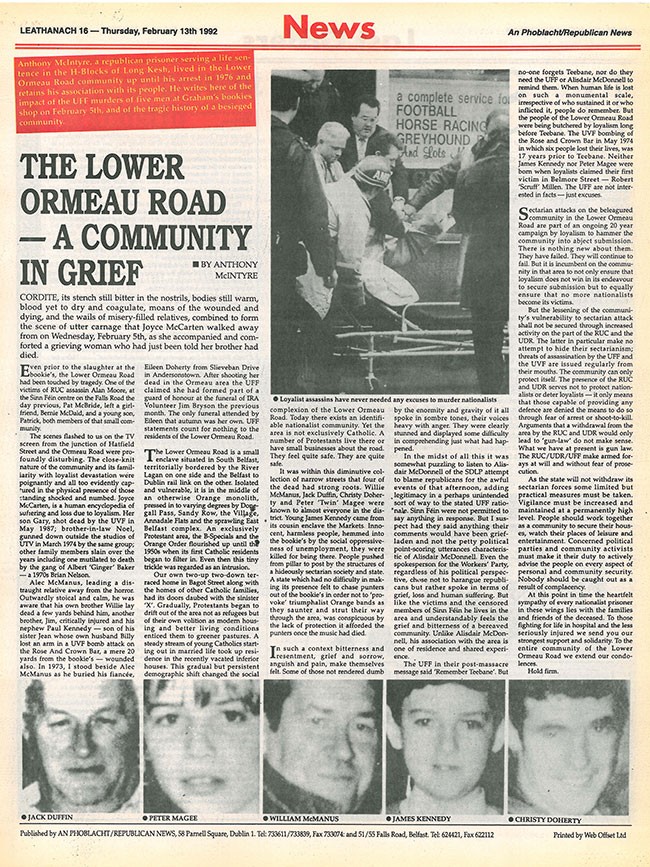 Meanwhile this latest incident has again brought to light the maligned influence of former RUC members on present day policing. Relatives for Justice has revealed that in the past four years former RUC officers have attempted to block the North’s Ombudsman from issuing the completed report into the 1992 mass killing.

“There is irrefutable evidence that collusion was a significant factor in the attack; no-one can challenge it. The fact that former RUC officers have now in effect blocked us from getting the truth adds insult to injury. We call for the report to be released immediately. The facts stand for themselves,” said an RFJ spokesperson.

Over the years more and more evidence of RUC collusion with the loyalists has emerged. To date the North’s Police Ombudsman’s office has yet to publish its findings into the ‘Bookies Massacre’ and other attacks leading organisations such as RFJ to accuse the Ombudsman and the PSNI of trying to cover up the extent of state involvement with UDA gang.

A previous HET report, from 2010, disclosed that one of the weapons used in the attack, a Browning 9mm, had been handed over to the RUC Special Branch by UDA agent William Stobie to be “deactivated”.

The pistol was then returned to the UDA quartermaster, clearly it hadn’t been decommissioned, and was used to kill 22 Aidan Wallace in West Belfast in December 1991 before being used in the Bookies attack. The other weapon used was a VZ 58 assault rifle which was part of the consignment smuggled in to the North by British army agent and UDA intelligence officer Brian Nelson.

Meanwhile it has also emerged that Relatives for Justice has complained to RTE over its coverage of the incident during its 9pm broadcast on Sunday 7 February. During the news package reporter Tommie Gorman referred to “scuffles” between the PSNI and people, adding that the crowd “swelled” and a “row ensued”.

A short video by the families calling for the publication of the Ombudsman Report can be accessed here: https://www.youtube.com/watch?v=qzp8ac_Idco&feature=youtu.be