Why is there is no clear leadership within unionism? 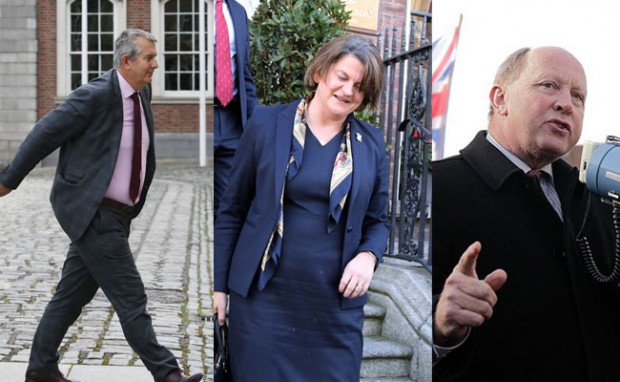 “Unionists last night erupted in fury after the EU unilaterally activated a crucial clause in the Brexit deal, in what Arlene Foster dubbed ‘an act of incredible hostility’.”

So read the opening paragraph in the front page article of the Belfast unionist daily News Letter on Saturday January 30 as news emerged that the EU threatened to invoke Article 16 of the Irish protocol and block the importation of anti- Covid-19 vaccines into the Six Counties from Europe.

Days earlier a public row erupted between Britain and the European Union over the supply of the vaccines with the EU accusing Britain of operating a “first come first served” policy as it emerged that the joint British/Swedish company AstraZeneca warned Brussels that it would only supply 25% of its contracted delivery while at the same time committing to deliver 2 million doses a week to the Britain.

While the row was resolved quite quickly, with EU Commission President Ursula von der Leyen, seeming to back down when challenged by the North’s political parties as well as the Dublin government, the reality was that Unionists took full advantage of the spat to goad the British government to invoke Article 16 on their behalf and ditch the Irish Protocol.

The Protocol, as far as the unionism is concerned, puts a ‘border in the Irish Sea’ and separates them from the ‘rest of the United Kingdom’ and so in recent weeks with more and more examples emerging of the actual consequences of the border checks and the outworking of Brexit the more the unionist parties have demanded that Boris Johnston invoke Article 16.

Ironically one of the areas highlighted in recent weeks has been the restrictions on garden centres and the present difficulties these businesses face when ‘importing’ plants, seeds and soil from Britain. This conjures up images of the garden centre unionist, who will defend the union from the existential threat of Irish unity when shaken out of his/her apolitical gardening apathy.

That the vaccine row was in reality a flash in the pan, albeit leaving a bad taste in peoples’ mouths, it did however come at a bad time for unionism, in particular the DUP. 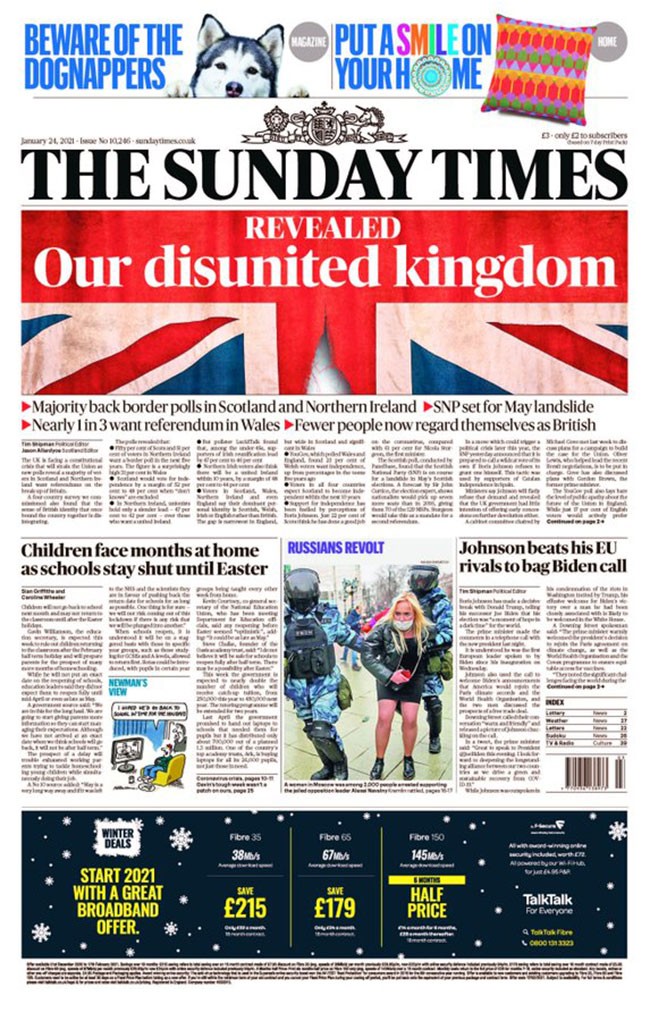 The publication, on Sunday 24 January, of a LucidTalk opinion poll, commissioned by the Sunday Times, found that 51% of the electorate now support Irish reunification.

If this wasn’t bad enough a second LucidTalk poll, published in the Belfast Telegraph days later, found that support for the DUP has plummeted to a 20 year low – to 19% - dropping 9 points from the 2017 Assembly election with the TUV and Jim Allister seeming to be the main beneficiary. 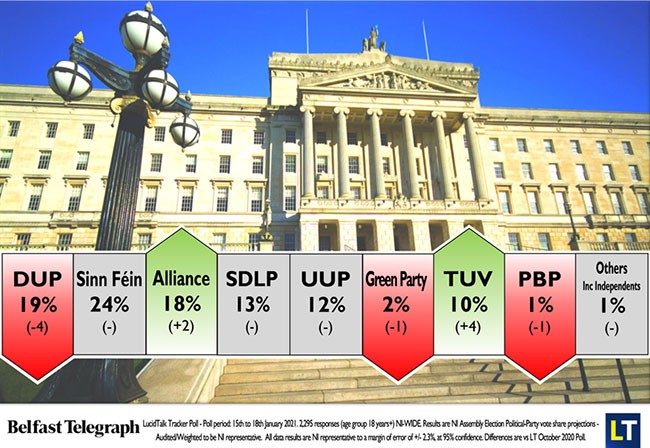 And despite an almost 4% drop in Sinn Féin’s vote the results predict that if these figures are replicated in next year’s Assembly election Michelle O’Neill would take the position of First Minister.

So if this is all taking place in the ‘front of house’ what does it tells us about what is going on in the penny stalls?

In reality the dramas being played out in unionism give us a real sense of déja vu and throws up the question as to how worried people should be about the upsurge of graffiti threatening customs officers and council employees based in the Larne and Belfast ports checking the lorries and goods crossing the Irish Sea, some of which appeared before the ‘vaccines’ row.

That the PSNI is giving reassurances, maintaining the line that none of the ‘main’ loyalist gangs – the UDA and UVF – are behind the threats, the reality is that experience tells us how over the years  the RUC and PSNI have always treated loyalist activity with kid gloves.

In fact, when speaking to the Westminster Northern Ireland Affairs Committee, the PSNI’s Assistant Chief Constable Mark McEwan cited loyalist “discontent” … in the “Protestant/loyalist/unionist community” but added cryptically this “has not manifested itself in any out workings at this point”.

Presumably this means that the UDA and UVF haven’t, as yet, tried to bring the Six Counties to a standstill in the way we witnessed in 2012 in the aftermath of Belfast City Council’s ruling on flying the union flag on only designated days. 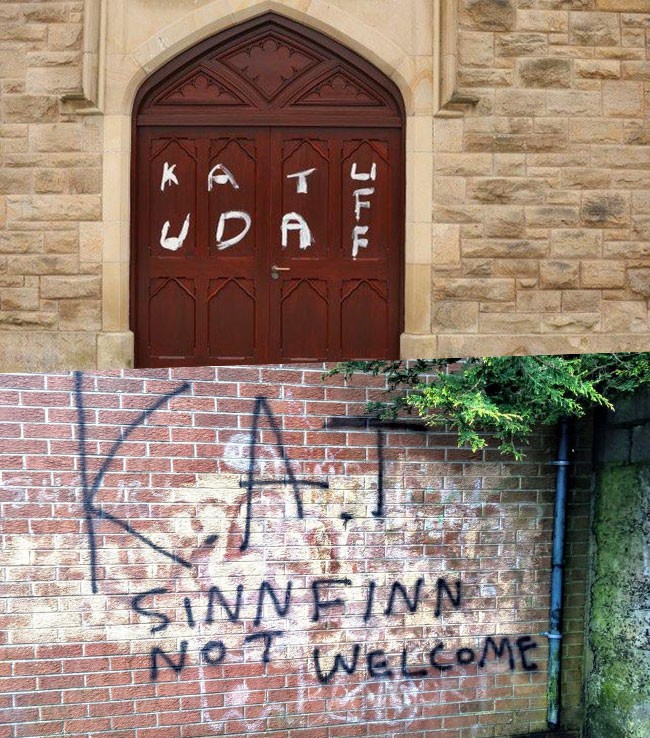 Or maybe the daubing of walls with vicious graffiti warning Leo Varadkar there is a noose waiting for him, or the scribbling of KAT (Kill all Taigs) and UVF on St Mary’s Church in Limavady, County Derry, or defacing the offices of Alliance Party politicians aren’t the “out workings” of this “discontent”. Nor should we overlook the renewed attacks on the Irish language.

However more sinister are the indications that the type of sectarian and racist incidents that we witnessed in the aftermath of the Brexit referendum in 2016 are on the rise again. December saw supporters of the notoriously unionist Linfield soccer club hurling sectarian insults at Catholic players on the opposing Glentoran team, chanting “fenian bastards” while the UDA shot and wounded Paul Fleming in Coleraine, County Derry with a shotgun. Fleming accused the loyalists of targeting him over his support for Celtic.

Meanwhile in South Belfast, on January 14, the Donegall Pass premises of the Belfast Multi-Cultural Association which works with mainly with people from Black and ethnic communities was severely damaged in an arson attack. People working in the centre had been targeted in previous incidents.

However we shouldn’t be surprised that the PSNI takes a benign view of loyalism when its political masters in the NIO are meeting representatives of the UDA, UVF and Red Hand Commando under the umbrella of the Loyalist Community Council to discuss “loyalist concerns regarding the impact of Brexit on the British identity”.

The January 19 online meeting according to the loyalists “was forthright and hard-hitting. It was important for the NIO to be told the feeling in loyalist working-class estates. There is a lot of fear that our identity is being diluted”.

The LCC said the Government must act “to ensure there would be no actual or perceived diminution in Northern Ireland’s constitutional position”.

Also there is the question of how we regard the condemnations of these threats issued by unionist parties and their elected representatives?

It is hard to see these as genuine given the continued and continual barracking, aggressive and disparaging language coming out of the mouths of unionist politicians and commentators in the present climate. Put another way, unionists are using loyalist ‘anger’ as leverage.

So on reading various unionist commentators it is becoming clear that there is no clear leadership within unionism, that the DUP in particular is in a quandary as to what to do and where to go, especially as nearly every day we are hearing of a new challenge to Arlene Foster’s leadership. 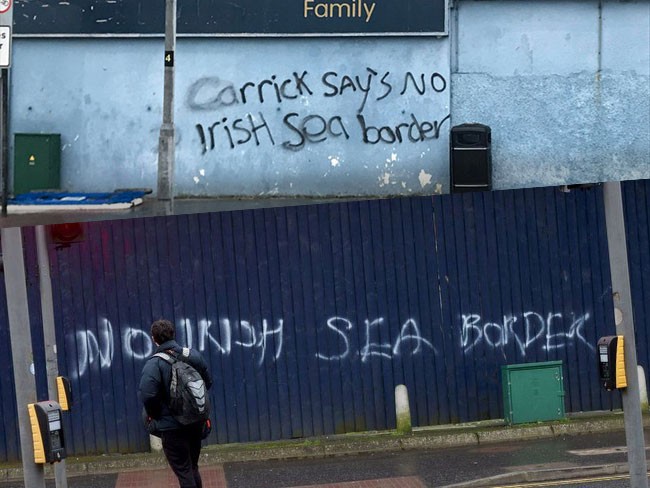 And it is in this context that the threat by the EU last week to invoke Article 16 was a godsend. It added momentum to the ‘Scrap the Protocol’ campaign, provided a platform for unionists to trumpet the ‘war cry’ of ‘The Union is Under Threat’ and acted as a lightning rod to every shade of unionism to warn that “our Britishness is being eroded”.

These are all trigger words that we’ve heard down through the decades whether it was in 1968/69 over civil rights; whether it was when Stormont was prorogued in 1972; whether it was Sunningdale in 1974 or the Anglo-Irish Agreement in 1985 and through to the Good Friday Agreement. The drum majors in charge of the unionist parties have banged the drums inciting wider political reactions within unionist and loyalist communities.

At this stage it is worth looking at the commentary of the last couple of weeks leading up to the port inspectors being taken off site in both Larne and Belfast due to alleged threats.

And let’s be clear about this. The decision to withdraw inspectors, who are council employees, from Larne Port was made by councillors from Mid and East Antrim council, a council dominated by the DUP, TUV and UUP, with the DUP Mayor Peter Johnston making what Sinn Féin’s North Antrim MLA Philip McGuigan called “a political” announcement.”

The decision was influenced by the council’s chief executive Anne Donaghy’s claim that the UDA were behind the threatening graffiti and which was made without reference to the PSNI who had not issued a threat assessment.

Also the decision by Edwin Poots to withdraw Department of Agriculture inspectors from both Larne and Belfast harbour with the EU subsequently deciding to take its staff off-site came about after Poots told his permanent secretary to stand the inspectors down overriding the PSNI who the DUP man said didn’t “have a full understanding of the risk”.

In the wake of this move the PSNI went to the crease maintaining the line that the PSNI “is concerned” that they are looking at “the actions of individuals and small groups” and “we don’t believe that those actions are organised”.

So while the UVF show of strength and the intimidation of families which took place under the noses of the PSNI in Pitt Park, East Belfast on Wednesday 3 February, and adjacent to the nationalist Short Strand, may not be directly linked to the situation at the ports it is nonetheless evidence that these loyalist gangs are, no pun intended, a law unto themselves.

Unsurprisingly the éminence grise of unionism, Jim Allister, ably abetted by loyalist Jamie Bryson is winding things up and the DUP, fearing an electoral wipe out is biting.

On January 1 Allister decried the Protocol as creating an “all-Ireland economy” and that economic unity would lead to political unification while Bryson echoed Allister’s economic unity fear went on to advocate “political instability” and quoted Ian Paisley who described loyalist communities as “powder kegs”. 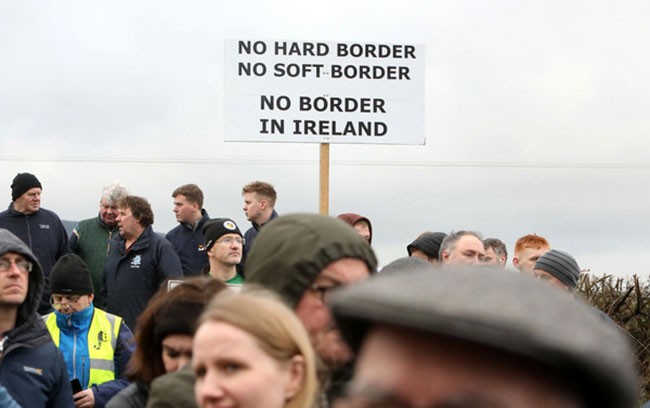 Paisley used the term at the same meeting of the Westminster Northern Ireland Affairs Committee, in which he referred to the Catholic IRA “murdering Protestants”. Despite the incendiary nature of his comments Paisley refused to retract them.

Then on January 28 Allister in a News Letter column under the headline, ‘Where’s the fighting spirit’, outlined his plans for seeing Article 16 invoked. Among these ideas were blocking the operation of the North/South element of the Good Friday Agreement, refusing to implement any EU related legislation in the Assembly and he called on the DUPs Edwin Poots as minister with responsibility for the port inspections to refuse to operate the system.

And lo and behold when detailing the DUP plan to thwart the Protocol, on Wednesday 3 February, it was clearly a ‘cut and paste’ from the Allister plan.

Finally, consider the views of David Campbell who chairs the Loyalist Community Council (LCC). He told listeners on BBC when asked about the meeting with the NIO, the Protocol and the possibility of loyalist violence responded saying “if it comes to the bit where we have to fight to maintain our freedoms with the United Kingdom then so be it”.