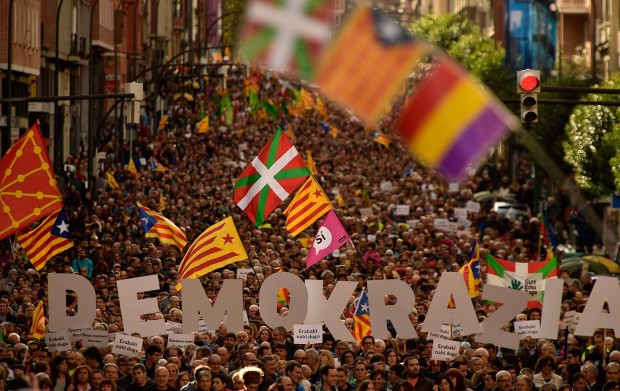 “Catalunya and the Basque Country are European issues. It is no longer tenable for the European Union (EU) to remain passive and silent in the face of democracy being denied, and human rights violations being perpetrated: Or, whilst the Spanish government fails to engage in direct, good faith negotiations with the respective political leaderships" - Declan Kearney

My interest in the Spanish Civil War was triggered at a young age by a book on the shelf at home.

Later I read accounts of how Irish volunteers, along with many other progressive internationalists, defended the Popular Front republican government from the fascist onslaught, in Mick O’Riordan's 'Connolly Column', Charlie Donnelly's exceptional 'Even the Olives are Bleeding', and Seán Cronin's brilliant biography of Frank Ryan, the socialist republican leader who helped to mobilise and lead, the Irish Connolly Column: A story forever immortalised in Christy Moore's tribute 'Viva la Quinta Brigada’.

The Civil War started after fascists revolted against the election of the Popular Front government in 1936, and the establishment of the second Spanish Republic five years earlier. It lasted from 1936 until the republicans surrendered in April 1939.

During that period fascists waged a brutal campaign, including the indiscriminate carpet bombing by the Nazi Condor Legion of Gernika and Durango in the Basque Country.

Many from both the Basque Country and Catalunya were subjected to ruthless atrocities.

A couple of years ago I kept a promise to our Fiachra and took him to the Basque Country.

During the trip we arranged to meet our friend Ronnie Kasrils, the veteran ANC freedom fighter from South Africa, who was there at the same time to receive the annual award to 'Foreign Friends of the Basque Struggle'. 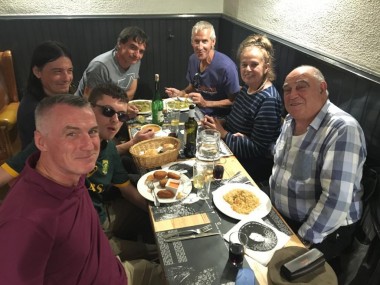 As we drove with Enrike and Igor from Arraste to Iruñea past the mountain range of Urbasa, they showed me the cliff of Pilatos where over 200 prisoners from the republican side were hurled to their death on the rocks below by fascist forces.

The Spanish Civil War has left an enduring trauma within the popular memory of generations right up until the present day in Spain, Catalunya and the Basque Country.

The Second Republic and the Popular Front government were replaced by a dictatorship headed by General Francisco Franco, which lasted from 1939 for 36 years until Franco's death.

Franco presided over a deeply right wing, conservative, authoritarian regime, which repressed all forms of progressive political and social discourse and activity.

It set out to crush the popular desire for political and economic independence in the Basque Country and Catalunya, and their native languages and cultural traditions.

To this day its legacy continues to cast a long shadow over politics and society, and many of the state's key judicial, military and security institutions.

Since Franco's death, successive Spanish governments have either acquiesced to the influence of the Francoist legacy within the state apparatus, or they have struggled to break free and open up new democratic horizons.

This has been most clearly evidenced in relation to state and government policy towards the Basque Country for over 30 years, and in more recent years by the failure to embrace the Basque peace process itself. 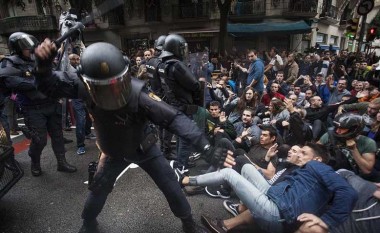 It was further illustrated by the violent attempt to suppress the independence referendum in Calatunya in October 2017, and subsequent subversion of international political and human rights, when the Catalan Republic was proclaimed on 27 October 2017.

As a direct consequence autonomy arrangements for Catalunya were suspended by the Spanish state, and members of the Catalan government, and other leading civic and political leaders were jailed or forced into exile.

However, the potential for a new democratic political era in Spain has slowly begun to emerge following the snap general election on 28 April 2019.

This election took place in the midst of growing political and social polarisation, and the threat of a right-wing government being formed by the conservative Poder Popular and Ciudadanos, and extreme right-wing Vox party.

Instead the Spanish socialist party, PSOE, and progressive left party PODEMOS secured sufficient seats to create a coalition government. At the same time support also surged for pro-national independence parties in both the Basque Country and Catalunya.

PSOE and PODEMOS went on to form a coalition on the basis of a clear left of centre Programme for Government. This was directly facilitated by progressive pro-independence MPs from both Esquerra Republicana de Catalunya (ERC), and the Basque EH Bildu because they abstained from the government formation vote in parliament. Subsequently the coalition’s budget was passed with the support of these same MPs in 2021.

This new coalition is arguably the most progressive Spanish government to hold power since the Popular Front government in 1936.

And while many of the historic ideological and political fault lines in the Spanish state remain, most sharply exposed in the electoral rise of the Vox party, the formation of the PSOE and PODEMOS coalition has raised hope and expectation for real change.

That feeling has popular expression in both Catalunya and Basque Country, where the momentum for national independence continues to grow, especially since the Catalan independence referendum, and the major initiatives taken by ETA to build the Basque peace process by ending its armed campaign, putting its arms beyond use, and announcing the dissolution of its organisation in 2018.

Despite all that, the new Spanish government has failed to engage with the opportunity to commence good faith, inclusive negotiations with the pro-independence leaderships in each country towards securing political resolutions and new constitutional settlements based on national and democratic principles. 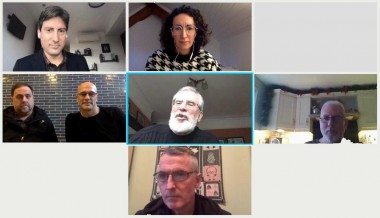 Two days before Christmas past, Gerry Adams and I had an online prison visit with Oriol Junqueras, President of ERC, and Raul Romeva, former Foreign Minister in the Catalan government.  Both are serving sentences of 13 and 12 year's respectively in Lledoners prison, Barcelona. There are another seven political prisoners, and at least seven other leaders are in exile.

Oriol and Raul were joined by Marta Rovira, the ERC General Secretary who is herself exiled in Switzerland.

Gerry and I reiterated Sinn Féin's support for the political prisoners and their exiled comrades.  Gerry reminded us all of the historic solidarity between Ireland and Catalunya.

In a press statement afterwards I repeated what I said to our friends; state repression only breeds political resistance.

The fact is, just as criminalisation policies failed in Ireland, they will never succeed in Catalunya.

A political resolution to the crisis between Catalunya and Spain will only be found through an inclusive negotiation process.

So as a matter of urgency the Spanish government should resume the dialogue with leaders of the independence movement which began in February 2020, but has been stalled ever since. 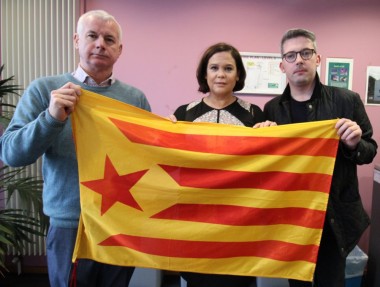 Earlier this month Sinn Féin President Mary Lou Mc Donald TD wrote to an Taoiseach registering our party’s support for the immediate release of all prisoners, the return from exile of other leaders, and the introduction of an amnesty. She called on the Irish government to give leadership by encouraging the Spanish government to embrace dialogue to resolve the crisis.

The Catalan leadership in prison and exile has a legitimate political mandate for independence. That must be respected by the government in Madrid.

Rather than relying upon failed policies from the past, this particular Spanish government has to reconcile itself to that democratic reality, and the popular momentum for independence in Catalunya.

Then in early December there was new evidence of further political regression by the Spanish state regarding the Basque peace process.

In a new negative move the Spanish Supreme Court announced its decision to reopen the case of five Basque political leaders, including Arnaldo Otegi, General Secretary of EH Bildu. 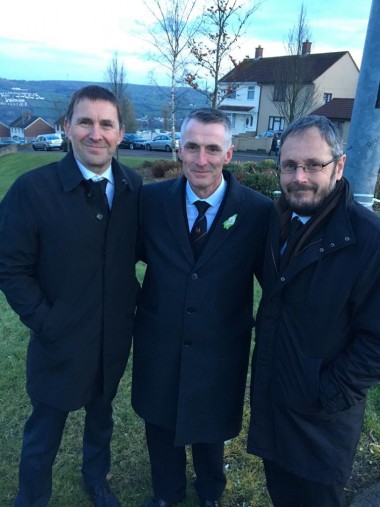 Previously in 2011 these comrades were imprisoned for 6.5 years by the Spanish Supreme Court. However, in 2018, by which time all five had served their sentences in full, the European Court of Human Rights (ECHR), ruled their right to a fair trial had been violated.

This latest ruling constitutes a serious violation of the 2018 ECHR ruling, and infringes the human rights of all concerned.

But it is also a premeditated political attack against those central to building the Basque peace process, and the very integrity of the process itself.

Arnaldo was essential to the political strategy which led to the ending of armed actions, disarmament, and eventual dissolution of ETA. He has displayed immense leadership by taking courageous risks for a democratic peace in the Basque Country. These mighty efforts were directly supported by Gerry Adams, Ronnie Kasrils, and other international leaders.

There is no justification for this Spanish Supreme Court decision. The only apparent explanation rests in the continued influence of those within the Spanish state system who remain politically and psychologically at war with Basque leaders who want the peace process to be successful, and aspire for a political settlement based on national and democratic principles.

This is familiar to us in Ireland. Similar elements in the British system continue to try and disrupt our peace process. 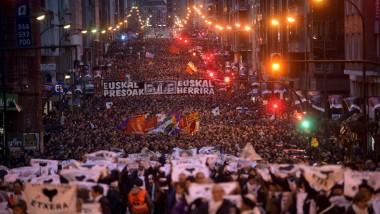 The policy of attempting to criminalise Basque political leaders pursued by previous Spanish governments has been an abject failure.

This Spanish government must disassociate itself from efforts to criminalise and reimprison Basque peace makers like Arnaldo Otegi.

As recently as 19 January the ECHR condemned Spain for the sixth time due to its failure to properly investigate complaints of torture against political detainees.  In all instances the presiding Spanish judge was Fernando Grande Marlaska.  He is currently serving as the Interior Minister of this Spanish government.

The Basque peace process should not be taken for granted; urgent confidence building measures are required from Spain.

Peace is progressed by solving problems, not by creating new set backs.

The achievements to date of the Basque peace process need to be consolidated by releasing the remaining political prisoners and commencing proper negotiations with pro independence Basque political leaders.

Catalunya and the Basque Country are European issues.

It is no longer tenable for the European Union (EU) to remain passive and silent in the face of democracy being denied, and human rights violations being perpetrated: Or, whilst the Spanish government fails to engage in direct, good faith negotiations with the respective political leaderships.

The EU should recognise that there are critical national and democratic issues to be resolved in both the Basque Country and Catalunya, and use its considerable diplomatic influence with the Spanish government to assist in finding permanent resolutions. 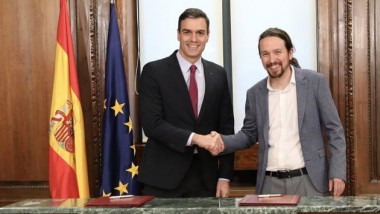 Of course the primary responsibility for addressing relations between Catalunya, the Basque Country and Spain, sits with the government headed by Pedro Sánchez and Pablo Iglesias.

To their credit they do lead the most progressive Spanish government in over 80 years.

Now for the first time in that period a Spanish government has both an opportunity and incentive to begin engaging democratically about the futures of Catalunya and the Basque Country.

Sánchez and Iglesias must give progressive leadership and do the right thing. They should break decisively the Francoist legacy which continues to undermine Spanish democracy, and lead their government in bringing forward a positive, new agenda which enables self determination for the people of Catalunya and the Basque Country.