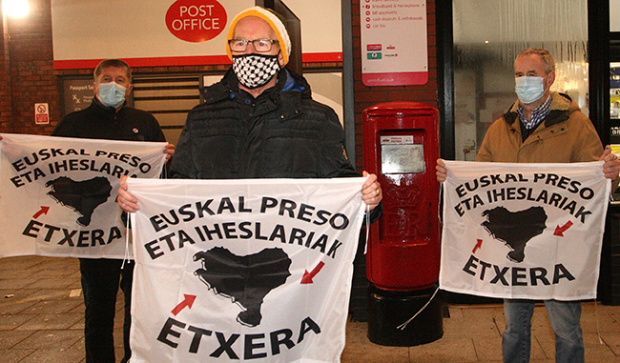 Sinn Féin’s National Chairperson Declan Kearney has criticised the decision of the Spanish Supreme Court to reopen the case against senior members of the Basque Political leadership and has accused the Spanish state of attempting to criminalise those who are driving the Basque Peace Process.

At the event organised jointly by the Belfast Basque Solidarity Committee and Coiste na nIarchimí Kelly pointed out that despite an ETA cessation of military operations made “permanent” in 2011 the Spanish government has dragged it’s heals on the release of prisoners. It is still operating a “dispersion” policy of holding prisoners thousands of kilometres from the Basque Country, effectively punishing their families too.

“While there have been some improvements”, said Kelly “the reality is that 219 prisoners are still in jail and their imprisonment has been made worse by Covid-19 as visits have been stopped”.

In the latest attempt by the Spanish state to undermine and criminalise the Basque leadership the Spanish Supreme Court, according to Kearney, has decided to reopen the case of five Basque political leaders, including the Secretary General of EH Bildu, Arnaldo Otegi, who were sentenced to 10 imprisonment in 2011 accused of membership of ETA. The court later reduced the sentences to six and a half years.

However in 2018, by which time all the accused, including Otegi and Rafa Diez, Sonia Jacinto, Mitren Zabaleta and Arkaitz Rodriguez had served their full sentence, the European Court of Human Rights (ECHR) ruled that article 6.1 of the European Convention on Human Rights on the ‘right to a fair trial’ had been violated.

According to the Sinn Féin MLA this latest ruling by the Spanish Supreme Court “constitutes a serious violation of the previous ECHR ruling in 2018 in this case”. It also “infringes the human rights of all the accused” and is also a “premeditated political attack on those who are at the centre of building the Basque peace process, and against the integrity of the process itself”.

Kearney went to accuse the Spanish government of attempting to criminalise the Basque political leadership and described the EH Bildu leader Arnaldo Otegi as the person “central to the strategy which led to the ending of armed actions, disarmament, and eventual dissolution of ETA. He has shown immense leadership in taking courageous decisions and risks for a democratic peace in the Basque Country.

“The policy of attempting to criminalise Basque political leaders pursued by successive Spanish governments, has been a failure and should be ended. Such efforts only serve to undermine ongoing efforts to build a credible peace process. Conflict can only be resolved through dialogue, negotiations, and respect for rights.

“Sinn Féin strongly condemns this latest Spanish Supreme Court ruling, and calls on the international community to raise the serious humanitarian and political concerns surrounding this case with the Spanish government.

“Instead of attempting to criminalise and imprison Basque peace makers, the Spanish government should commence a process of releasing all political prisoners, and finally commit in good faith to commence proper negotiations with the Basque political leadership.”