Remembering the Past – Centenary of the Kilmichael ambush

Auxies defeated by IRA at Kilmichael 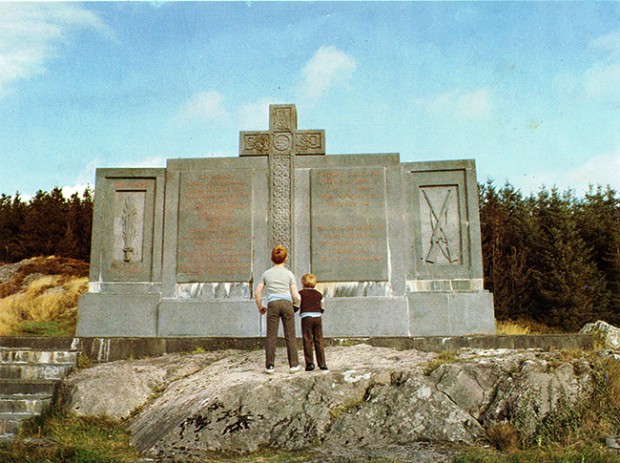 On the late afternoon of Sunday 28 November 1920, the flying column of the Third West Cork Brigade of the Irish Republican Army lay concealed in ambush positions in a rocky, heathery glen. Their leader was Tom Barry, a former member of the British Army, who had joined the Republican Movement and helped to pioneer guerilla warfare by the IRA’s flying columns.

Their target was a patrol of the notorious Auxiliary Division of the RIC. Since their introduction earlier that year the Auxiliaries and the Black & Tans, along with the regular RIC and the British Army, had carried out a reign of terror against the civilian population across Ireland. Just a week before they had murdered 14 people in Croke Park.

In that week before the fateful ambush 36 IRA riflemen were mobilised at Clogher, County Cork, for training. At 2am on the Sunday the IRA flying column fell in at Ahilina. Each man was armed with a rifle and 35 rounds of ammunition. A few had revolvers, and Tom Barry had two Mills bombs, which had been captured in a previous ambush at Toureen.

At 3am the men were told for the first time they were moving in to attack the Auxiliaries between Macroom and Dunmanway. On an extremely cold, wet night, the men began moving to Kilmichael to take on the dreaded Auxiliaries.

All IRA positions were occupied at 9am. All day they waited. Towards evening the gloom deepened over the bleak Kilmichael countryside. At 4.05 pm an IRA scout signaled the enemy’s approach.

The first lorry came round the bend into the ambush position. Tom Barry, dressed in a borrowed IRA uniform stepped onto the road with his hand up. The driver gradually slowed down. When it was 35 yards from the Volunteers command post a Mills bomb was thrown by Barry and simultaneously a whistle blew signalling the beginning of the ambush.

The bomb landed in the driver’s seat of the uncovered lorry. As it exploded, rifle shots rang out. The lorry, its driver dead, moved forward until it stopped a few yards from the small stone wall in front of the command post. While some of the Auxiliaries were firing from the lorry, others were on the road and the fighting was hand-to-hand. Revolvers were used at point blank range, and at times, rifle butts replaced rifle shots. The Auxiliaries were cursing and yelling as they fought, but the IRA coldly outfought them. In less than five minutes nine Auxiliaries were dead or dying.

Barry and the three men beside him at the Command Post, moved towards the second lorry. This had been engaged by No 2 Section, which was in the middle of the ambush area, high up on the rocks. 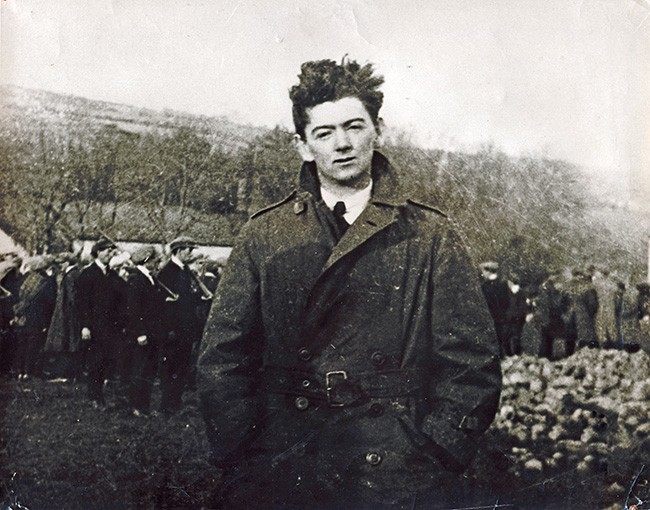 The second group of Auxiliaries had taken up positions beside the ditch. Some had taken cover behind their lorry as the fight went on. Barry, with the three men at the Command Post, crouched along the dyke. When they were about half way between the two lorries they heard the Auxiliaries shout: “We surrender! We surrender!” Some actually threw away their rifles and the firing stopped. The Volunteers accepted the surrender. In No 2 Section some Volunteers who thought it was over, stood up. But the Auxiliaries again took up their guns; some used their revolvers to open fire. Following this encounter three Volunteers were fatally wounded.

When he saw this Tom Barry gave the order: “Rapid fire and do not stop until I tell you.” The Auxiliaries once again shouted “We surrender” but on this occasion the order was given to “Keep firing on them. Keep firing, No 2 Section. Everybody keep firing on them until the ceasefire”. The small IRA group on the road was now standing up, firing as they advanced to within ten yards of the Auxiliaries. When the ceasefire order was finally given there was an uncanny silence as the sound of the last shot died away. 16 Auxiliaries were dead and one seriously wounded. Volunteers Michael McCarthy of Dunmanway and Jim Sullivan of Rossmore also lay dead, and Pat Deasy was dying.

The lorries were set ablaze. The column was ordered to drill and march for five minutes. They then halted in front of the rock where Michael McCarthy and Jim O’Sullivan lay, where they presented arms as a tribute to the dead Volunteers. Just 30 minutes after the opening of the ambush the column moved away to the south, intending to cross the Bandon River upstream from the British-held Manch Bridge. The men carried the captured enemy rifles slung across their backs. It started to rain again and the men were soon drenched. The rain continued as the IRA marched through Shanacashel, Coolnagow, Balteenbrack and arrived in the vicinity of dangerous Manch Bridge. The Bandon River was crossed without incident and Granure, 11 miles south of Kilmichael, was reached by 11pm

The engagement at Kilmichael was one of the most important battles of the Tan War. The British crown forces had suffered a humiliating defeat as 16 battle-hardened, well-armed and highly paid officers fell in combat against hastily trained, poorly armed young Volunteers. As soon as news of the defeat for the crown forces reached Dublin Castle the propaganda counter-offensive began, the British hoping to maintain the fiction that the IRA was a criminal conspiracy rather than a military force.

British propagandist Basil Clarke in Dublin Castle concocted the story that the Auxiliaries had been mutilated with axes. (Meanwhile in County Galway the actual mutilation of the Loughnane brothers by the Auxiliaries had been revealed when their bodies were discovered.) The axes story was elaborated on and magnified in in The Times on 2 December. The IRA were described as “despicable murderers of the lowest type”. But the most revealing part of the report is the following:

“Terrible treachery on the part of the local inhabitants is indicated by the fact that, although many people attending Mass on Sunday morning were diverted from their route by the murder gang, no word was sent to the police, and the ambush sat there until dusk.”

This was supposed to be a condemnation of the local community, but it simply showed that the IRA was widely supported by the people. The flying columns could not have existed but for the active support of the women and the men who stood by them, and stood by the Irish Republic.

In February 1921 Tom Barry visited the home of a family whose son had been killed by the British Army and whose house had been destroyed by them. Other sons were in jail. Their daughters were active in Cumann na mBan.

Despite their suffering, the elderly parents were proud of the role played by their children in the fight for freedom. Tom Barry wrote of these people:

“Who can fully estimate the value of men and women like those in a Nation’s fight against alien rule?

“Their spirit and their faith in the justice of their cause did not allow of defeat at the hands of Imperialist mercenaries.

“British guns were not able to cow them, British money could not buy them, nor could British guile and duplicity wean them from their support for the Irish Republican Army, for indeed, they were as truly soldiers of the Resistance Movement as any Volunteer of the flying column.” (‘Guerilla Days in Ireland’.)