Mary Lou McDonald: We remember each of the fourteen who lost their lives on Bloody Sunday 1920 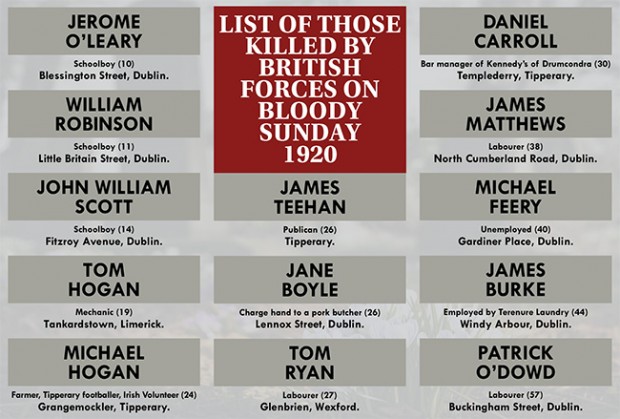 "We look to the past with respect and reverence and we look to the future with confidence and hope as we continue the work to reunite our country.” - Mary Lou McDonald

It is right and fitting that we mark the anniversary of the centenary of Bloody Sunday 1920 today.

We look to the past with respect and reverence and we look to the future with confidence and hope as we continue the work to re-unite our country.

The last year has been incredibly difficult for our people.

A century ago the people of Ireland also faced a time of great challenge as we sought our independence. It was also a time of great loss and heartbreak. Nowhere is that more vividly encapsulated than in the story of Bloody Sunday 1920.

One hundred years ago today, fourteen civilians were shot and killed in the massacre at Croke Park.

Their cold and brutal murders were an act of vengeance by British forces enraged by the success of IRA counter-intelligence operations carried out in Dublin earlier that same day. These actions had dealt a massive blow to the British war machine in Ireland.

The massacre was a pivotal moment in the Tan War. The indiscriminate, ruthless and frenzied nature of the killings signalled Britain’s weakening hold on Ireland. The savagery of these horrific reprisals merely served to increase support for the IRA and further fuelled the struggle for Irish freedom.

In remembering that tragic day, we must also recall the harrowing human reality of what happened in plain terms.

Fourteen innocent men, women and children went to watch a football match between Dublin and Tipperary on a Sunday afternoon - something many of them would have done regularly. They never came home to their families. The youngest victims were aged ten and eleven.

A century on from this harrowing chapter in our revolutionary history, we remember each of the fourteen who lost their lives.

Their names are not a passing footnote in history. All of those who died had their own stories.

They were making their way through their present in the normal way we all do. They had their aspirations for the future. They had people who loved them and who grieved them. The weight of that sudden and shocking personal loss should never be forgotten.

I want to commend the GAA for the poignant way that the association has marked the centenary anniversary during these very difficult times. The Covid-19 pandemic has reminded us of our resilience as a people and of the importance of remembrance as a community.

It is fitting and right that today we remember Bloody Sunday 1920 together.